From Ape Dog to Big Nose, do you know the origin of where these dog breed names come from?

Some dog breed names have no mystery about them at all. The Golden Retriever, the English Short Haired Pointer and the Nova Scotia Duck Tolling Retriever being cases in point, they’re breeds that do exactly what it says on the tin.

But other breeds have such seemingly weird and wonderful names that we thought it about time we uncovered the origins of these monikers.

Rather than coming across simple translations, we were wowed by cultural idiosyncrasies, ancient idioms and misleading misnomers that have all informed and altered the process by which dog breeds have gotten their names.

Even common, everyday names such as Mastiff or Collie have colourful and interesting etymological origins. What surprised us the most however, was how much the origin of dog breed names tell us about the history and culture of the place where the breed comes from.

There are certain types of dog that have collective names and further names to differentiate separate breeds, but what does the name that links these breeds actually mean?

Terrier, derives from the Latin terre which means ‘to go to ground.’

Collie, The name Collie derives from the same Anglo-Saxon word as ‘coal’, Coll, which means ‘black’.

Pinscher, comes from the German word for ‘Terrier’ and is applied to many different types of dog.

Poodle, is a corruption of the German word Puddlehund which means ‘dog that splashes in water’

Many breeds are named after the people that bred them, whilst other breeds, such as the Teddy Roosevelt Terrier, are named in honour of people.

The Jack Russell Terrier and the Parson Russell Terrier, are both  named after Reverend John Russell, who bought and then bred from a small terrier early in the Nineteenth Century.

Doberman(n) is taken from Dobermann. Friedrich Louis Dobermann was a German tax collector who realised he needed some protection from being robbed. He bred Manchester Terriers with Pinschers and Rottweilers with Greyhounds until finally producing the Doberman.

One of the most common and popular methods of naming a breed seems to have been honouring its place of origin.

Labrador, is the Atlantic coastal region of Canada where the popular breed was originally bred. It is separated by from the region of Newfoundland by the Straight of Belle Isle. The Labrador breed is a direct descendent of the…

Newfoundland, is possibly the most self explanatory place name to be given to a dog, ever. Newfoundland is pronounced with the stress on found which is sometimes deceptive as it is not entirely obvious that it is written as it is, but the correction pronunciation of the place name requires the stress to be on the final syllable.

Leonberger, is named for the German town of Leonberg. However, it wasn’t simply bred there and then given the name of its home, it was bred to specifically represent the town. The town had a lion on its official coat of arms. The Leonbergers decided that they wanted a dog represent them which resembled their lion, so they bred the Saint Bernard, Pyrenean Mountain Dog and Newfoundland and eventually arrived at the dog that many of us love today.

Akita Inu, Japanese Akita The dog we refer to as the Japanese Akita is known in his homeland of Japan as the Akita Inu. Akita is the name of the region in Japan from which the breed originates and the prefix Inu means ‘dog’ in some Japanese tongues.

Spaniel, there are many types of Spaniel. The word Spaniel comes from the old French word espaigneul ‘Spanish (dog)’, from Latin hispaniolus ‘Spanish’. Two popular types of Spaniel are the Cocker and the Springer. Cocker Spaniels and Springer Spaniels used to be the same. The Kennel Club divided the dogs by weight alone. If a dog weighed less than 25 lbs, it was classed as a Cocker Spaniel, otherwise referred to as a ‘Cocking Spaniel’ as its primary use was to hunt woodcock. If a dog weighed over 25 lbs, it was a Springer Spaniel. Litters would be split into two ‘groups’ for bigger and smaller dogs.

Rottweiler, comes from the old German Rote meaning ‘red’ and Wiell meaning tile. The town Rottwiell was so-called because most of the buildings had red tiled roofs. The butcher who bred the dog, named it after his home town.

Dalmatian, is a region in the former Yugoslavia which now lies in modern Croatia. The dog wasn’t bred there however, it was named there by the English who then took the dog back home and employed it as a carriage dog.

Alaskan Malamute, is a sled dog bred by the Mahlemut tribe of Alaska.

Some breed names have odd or unexpected origins, whilst some are pretty obvious when you translate them.

Borzoi comes the Russian word borzaya which translates as ‘quick dog’. Sometimes Sight Hounds are collectively referred to as borzaya in Russia.

Schnauzer, comes from the German word schanuz which means ‘muzzle’ or ‘nose’. The English slang word ‘snozz’ for nose has the same origin.

Affenpinscher, the first part of the name refers to Affe which means Ape in German, making the literal denotation ‘Ape Terrier’.

Dachshund, is a translation from German of ‘Badger-dog’.

There are a lot of dog breed names where you can usually guess the origin, but others have a more rich, intriguing and often confusing heritage.

The Dandie Dinmont Terrier is the only dog breed in the world to be named after a fictional person. Dandie Didmont was a character in Sir Walter Scott’s novel, Guy Mannering.

Great Dane, the ‘Great’ part is self explanatory, but there has long been myth and speculation over the origin of the ‘Dane’ part of the name. It is now accepted that the Great Dane is a German breed. The reason it is referred to as a Great Dane is that the dog was described by English noblemen when travelling in Denmark as simply a “great Danish dogge” and the name became shortened from then on.

Chow Chow, there are two theories on where this breed gets its name. The first relates to the Chinese slang word chou which mean ‘edible’. This theory is believed to have its origins in the fact that the Chinese and Koreans would breed dogs, especially smooth haired ones for food. The other, less unpleasant theory refers to a clipper ship that used to sail from China to England in the nineteenth century. It is suggested the name for the hold of the ship that contained miscellany was called the chow chow hold. One journey saw a dog emerge from the hold when it docked in England and that name was the one that stuck.

Greyhound, another misnomer breed is the Greyhound. The name has nothing to do with colour, the origin lies in an old English word, related to an old Norse word meaning ‘bitch’.

Komondor, the origins of this name are debated. There are two main theories as to where the name for this Hungarian guarding breed came from. Some say the name derives from the Hungarian word komor which means ‘sombre’, while others say it comes from the Turkish word kumundr which, when broken down phonetically translates as Ku which means ‘dog’, Mund which means ‘command’ and Ur which means ‘master’.

The origin of dog breed names provide a fascinating insight into local and cultural history all over the world, telling us much about the people of those countries.

Germans have demonstrated their famous efficiency in naming many of their breeds simply for the role they perform whilst the fading English eccentricities of old come to the fore with unusual methods of naming dogs.

The Canadians and Americans demonstrated their famous patriotism when naming dogs after their place of origin. Of course the exceptions to these stereotypes are just as, if not more interesting. 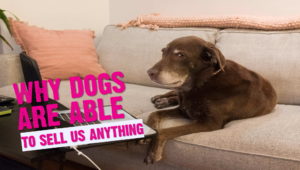 Our Friend The Dog, The World’s Greatest Salesman?