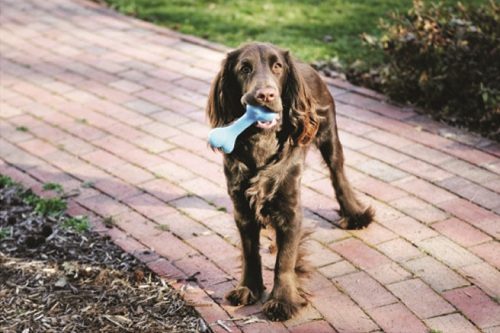 We all have questions about our dogs and why they do certain things and can't shake certain habits. This month we take some of your most common behaviour questions and ask top experts to offer their advice.

From an early age, dogs can be taught this most simple of commands. The importance of this function can be clarified by any dog owner who has had a dog run off into traffic or some other dangerous situation when being called back. The quality of your relationship will depend on the trust you have in your dog to return to you when commanding him to do so, otherwise you will find yourself being fearful to let your dog run free, whether in the garden, at the park or anywhere where there is enough space to necessitate the command to return to you.

The most common reasons for a dog not coming when called centre around early experiences associated with the command. Establishing leadership is essential to ensuring that your dog will return promptly on command, whatever the temptation to do otherwise. Your response to a disobedient reaction to this command can be the difference between a long and arduous campaign to assure the dog it is in his interests to return, or a rather more simple series of sessions demonstrating practically the benefits to him of returning when called.

Take this common scenario as an example of what not to do, no matter how frustrated you may get.

Upon receiving the ‘return’ command, the dog not only fails to return promptly but continues what he is doing until he decides he wants to return. Eventually he returns of his own accord. At this point it is easy and very tempting to punish the dog for his disobedience. A firm tug when the lead is on, or a verbal reprimand may, at this point, seem like appropriate measures to take. However, it is at this point that the dog has actually demonstrated the desired behaviour, he has returned. Punishing him now will engender a negative association with returning to you. You will effectively be teaching your dog not to come when called.

The safest environment to begin your campaign to have your dog return when called is in your home. It does not matter if the need for this command never arises in the home, the aim is to make your dog want, more than anything else that could possibly tempt him, to return to you upon your command.

In your yard or house, put the dog on an extendable leash. Designate a distance you will allow him to wander before you correct him. Allow him to go, and then firmly and confidently call his name followed by whichever command you intend to use. (It is essential that you are consistent with which command you use. Whether it is ‘come’ or ‘here’, only use one command for one function to avoid confusion. The word ‘come’ contains hard consonant sounds and is more easily distinguishable. The intonation of your command should always remain the same too.) Do not repeat your command over and over, give the dog an amount of time to react to your command (this amount of time should be reduced as he becomes more responsive.)

Just before your dog hits the designated distance you have set out, administer the command. If he fails to return, your lead will prevent him going any further. At any point that he does return, reward him with praise and a treat. Make him associate returning on your command with reward.

Remember that during the early stages of these exercises, the freedom he has by not returning can be used as a reward. In a safe environment such as your yard, reward him by allowing him to wander away after he has returned and then continue to practice the command.

As with many behavioural problems, prevention is better than cure. This is no different when dealing with inter-dog aggression, chasing - or both. This is one of the hardest behaviours to effectively deal with, as some dogs may seek to establish their position through acts of aggression. Reducing the opportunities for this undesirable behaviour to occur is preferable to dealing with the consequences of an encounter between your dog and another dog you would rather avoid.

It’s worth noting that changes occurring in a dog’s general behaviour, of which one is an increased tendency to be aggressive, could be medically related rather than a behavioural trait and veterinary attention or advice may be more appropriate than behavioural attention.

“I have encountered many instances of chasing where the instigator of the chase has had such a behaviour corrected instantly by his subject via a bite, growl or some other defensive reaction. Many times, the chaser learns from his mistake and realises that to chase another dog could result in a painful end. Other cases however, have demonstrated that certain dogs chase or instigate fighting in spite of what has happened to them as a consequence.”

Very often chasing is part of a playful interaction. The dog initiating the play however may appear to be acting aggressively. In any such case, this behaviour should be dealt with by the owner.

[premiumcontent]You can also try to eliminate the element of fear and panic that some dogs associate with car travel. Let the dog associate itself with the car and make being in the car a pleasant experience. Before you even take a journey with your dog, let him explore the car. Give him treats and reassure him.

The next step should be to make small journeys in the car. Firstly you should take journeys that don’t go anywhere except for back home. That way the car will not immediately be associated with the excitement of a new destination. Then take slightly longer journeys to places such as the park, the beach or anywhere the dog likes to be.

This should prepare the dog for his first car journey to a new place. Make the dog’s area in the car as comfortable as possible. Include his favourite toys, blankets and anything that he can associate with home and security.

If you are a user of public transport such as trains or buses, your preparation needs to be a lot more thorough. Getting a group of friends with whom the dog is familiar to travel with you on your first few bus or train journeys is a good way of distracting your dog from all of the unfamiliar and new noises, faces, smells and movements.

You could also speak with your veterinarian, there are some medicines, both herbal and veterinary which could help.

It is inappropriate to punish the dog if he is sick when travelling as it is an involuntary reaction to a situation. It is in your hands to ensure that the risk of this happening has been reduced. To some dogs, the physical act of being sick can be traumatic, this can often cause a cyclical sequence of events that make travelling an unpleasant experience for the dog. If he is sick when travelling, it is important to comfort the dog (not reward). Otherwise the association with being sick can cause panic when boarding the bus or train, which heightens the risk of being sick again.

If you have a doggy dilemma or pet peeve, you can send it to us at www.k9magazine.com and we'll do our best to feature your question next time!

Socrate’s Eye View Of The World: The Winter Weather Blues

How do you people cope? Why are your winters so cold? Can someone tell me why icicles are hanging off my coat? I’m not...

Top 10 Bad Dog Owner Habits… & How to Avoid Them

There is no doubt that we love our dogs and would do absolutely anything for them. We care for them when they are sick,...