Dogs really do have that special something that makes them our greatest confidantes, don't they?

We can share our innermost thoughts and know it won’t go any further. In part because, well, we know they can’t speak, but the loyalty they show us gives us the confidence to believe that even if they could talk, our secrets would be safe with them.

They are with us when life is great and when it’s not so great, we’ll still find them sitting loyally by our sides.

Recently, the charity Help for Heroes shared a video of two dogs, Mishka and Koda with their owner, Shane Kennedy meeting army veteran, Elaine Corner as part of their Facing it Together campaign.

In the video, Elaine explained how six years ago a motorbike accident meant her left leg had to be amputated below the knee and how the charity has helped her find new activities to focus on which has led to a career in competitive polo, while Shane introduced his two dogs and explained how together they volunteer at Tedworth House Recovery Centre to provide therapy to veterans suffering from debilitating conditions such as Post-Traumatic Stress Disorder (PTSD).

After the video aired, the two seven-year old dogs found fame on social media and we were keen to find out more. After all, you don't often hear about Alaskan Malamute therapy dogs, do you? 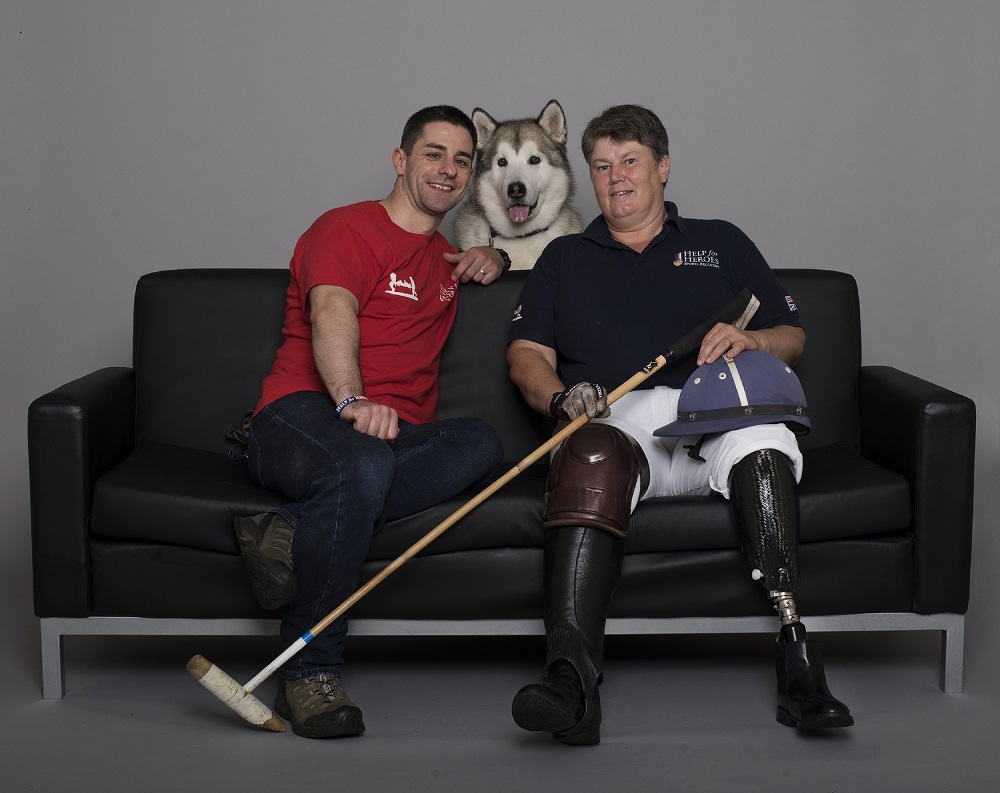 Hi Shane. Thanks for making the time to speak with us. Can you tell us a bit about Mishka and Koda please?

Mishka is the brains of the outfit! She is smart, and I mean Velociraptor smart! She is also very laid back but very confident. Koda is softer and loves fuss.

The two are littermates, we have had Mishka since she was a puppy and we adopted Koda at 2 1/2 years old. We were contacted by their breeders who told us that Koda needed a new home quickly and asked if we would consider taking her on. Koda was in a bad way, we only realised when she was in our home that she had a massive internal water infection. This was making her incontinent and obviously very sore. But after a lot of care and re-training, Koda became settled and a very important part of our hearts. 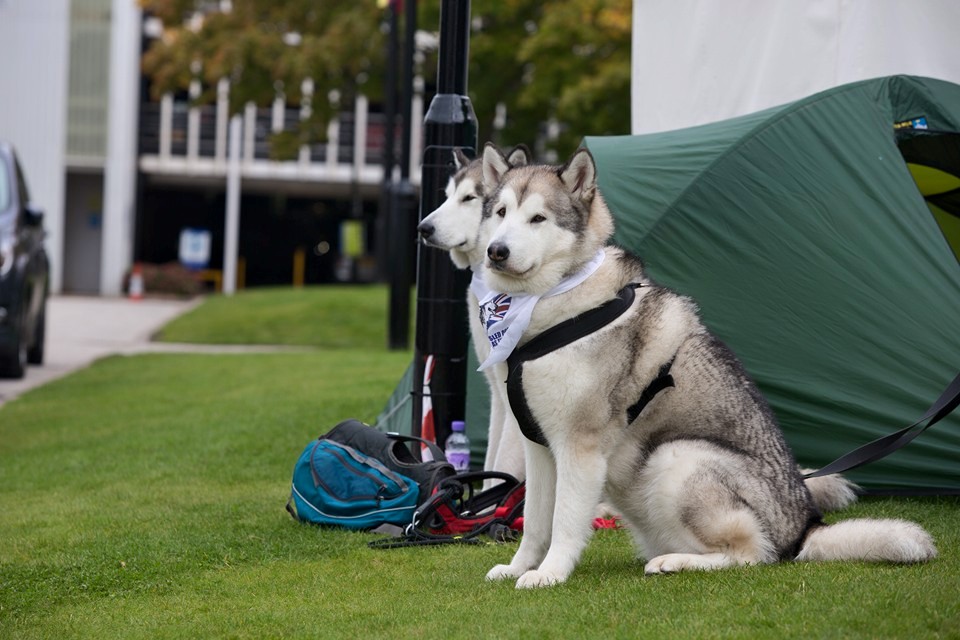 Miska and Koda, pictured the day after finishing a 110-mile backpack trek

How did Mishka and Koda begin volunteering to help veterans?

My background is in Sports Science and fitness and I had been specialising in physical activity and mental health for the previous seven years.

Due to funding cuts, I was looking at a possible redundancy and so was looking for my next step. I have always loved the training and care of sled dogs and had had sled dogs for several years.

The Malamute is the heavyweight of the sled dog world. Not as fast as a Siberian Husky, but very strong with great endurance.

I watched an interview on TV of a Veteran who was given a service dog. He had served in Afghanistan and had been badly injured. He was also was suffering from PTSD and said that his dog was the first person that he felt that he could trust! Within five minutes I had a rough plan of how I could use my dogs for therapy with recovering service personnel. I showed my wife who immediately told me that I had to do this!

I spent six months setting up the organisation and then approached Help for Heroes to offer my services. In 2015, we visited Tedworth House Recovery Centre in Wiltshire and did a group session. The first couple of visits were very well received and we were honoured to be invited back more regularly as part of Tedworth House’s Rolling Recovery Programme.

The dogs serve a great role in connecting with individuals. People get the chance to meet them, learn about sled dog training and care, and most importantly get to spend time with Mishka and Koda relaxing and having a cuddle. The dogs cheer them up!

As many sled dogs should be, Mishka and Koda are very naturally people friendly, yet very easy going. Sled dogs are very striking and Malamutes are magnificent animals.

I think that recovering service personnel can connect very well with sled dogs too. Even though Mishka and Koda are friendly, their needs are quite specific. They need good leadership, training and routine. 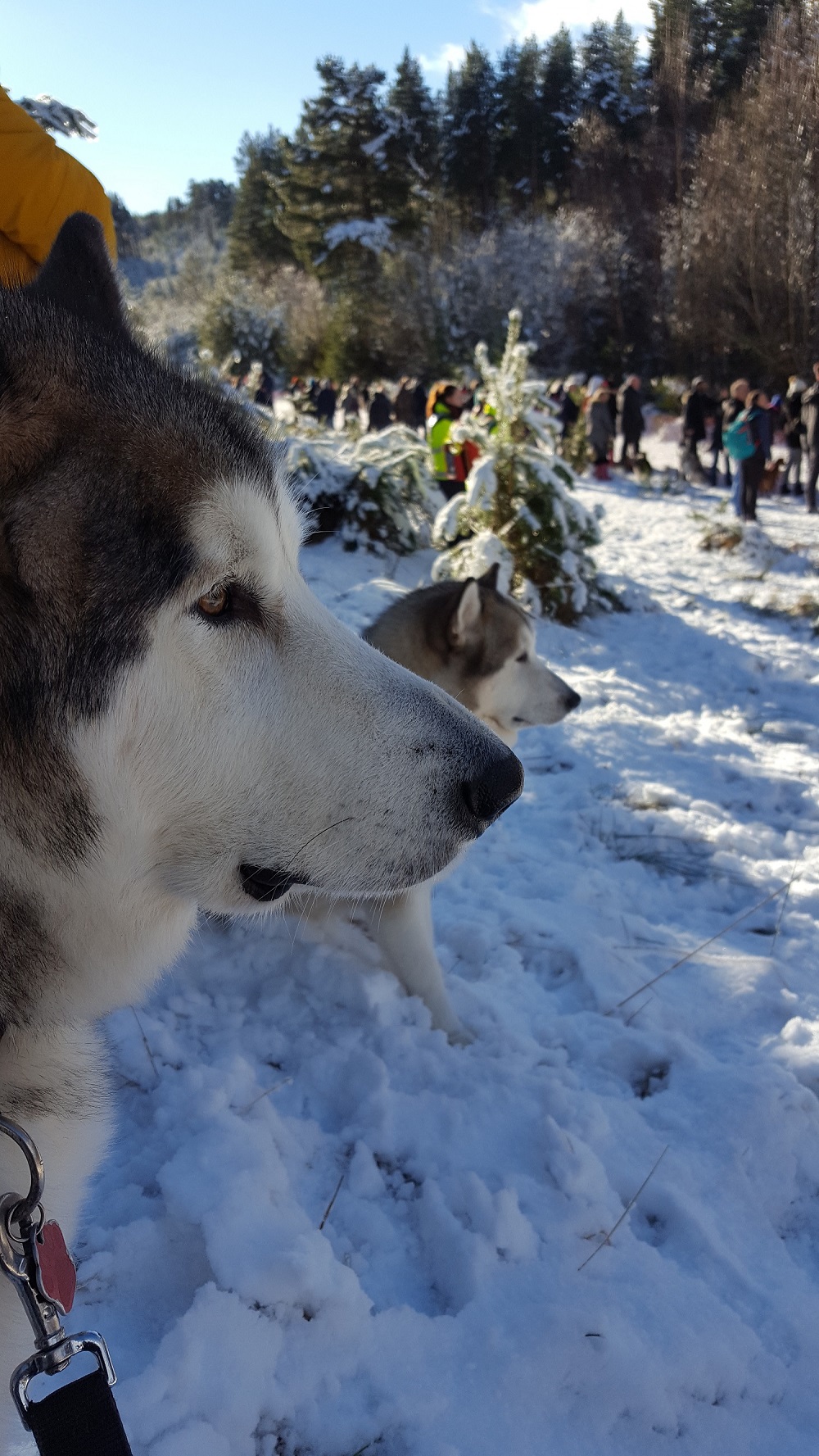 I see, so they may see something in what sled dogs need that they’ve experienced themselves while in service.

I always find that Malamutes will not just do what you ask just because you say so. You need to demonstrate that you are confident and worth following.

If you do this they will give you everything. This can make them very good for therapy. The dogs do not care who you are, or what you have done or what you look like. Dogs do not attempt to manipulate as they do not have an agenda (except at food time!) and all of this can help people connect with the dogs. They can take the risk and let their guards down.

Breed personalities aside, what makes your girls successful as therapy dogs?

Mishka and Koda both have fantastic personalities, yet they are very different. Out of the two Mishka is in charge and is very confident. She will usually be the first to go up to say hello to someone. She has an amazing heart.

We always notice that whenever we are doing therapy or just out and about Mishka will always want to approach people with disabilities. For instance, if there is a child in a wheelchair she loves to get involved. 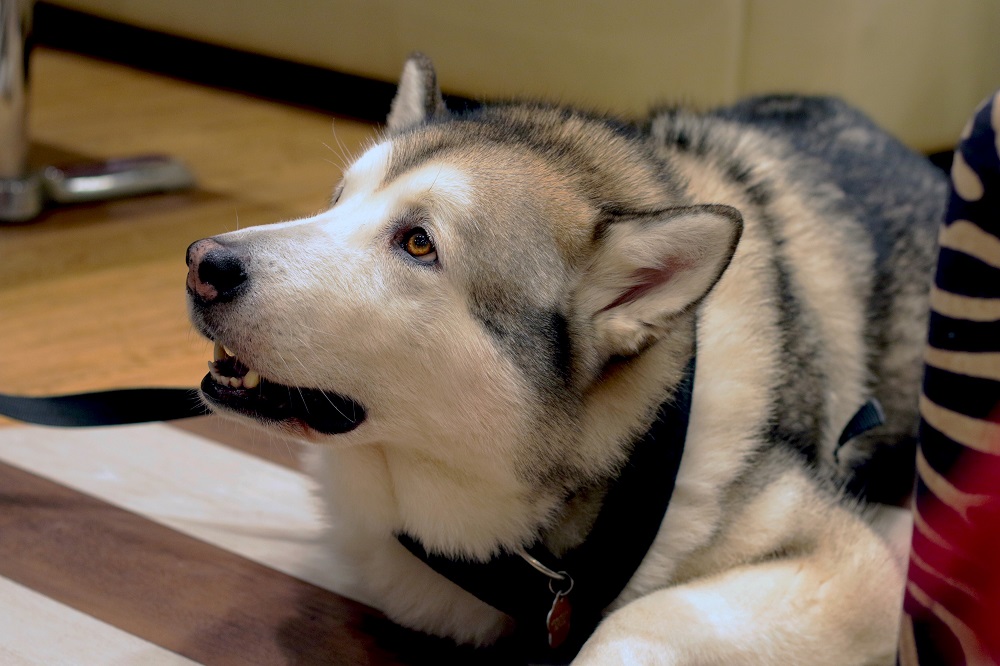 She will be the most vocal and will howl ‘hello’ to people she meets. She is also the most likely to be goofy. Mishka is very much a diva and she definitely knows her own mind. When she meets people and interacts with them, it is because she wants to, and not because I have made her.

The great thing about Mishka is the laughter she induces with her antics; she is great at breaking the ice and putting people at ease.

Koda is bigger than Mishka, for a female Malamute she is a tall girl! She is also more touchy-feely. She likes to connect with people; she is very calm and will often present herself as a target to be stroked, softly nudging you with a paw to let you know that the rubbing went away! She is really good with people who are a bit nervous. 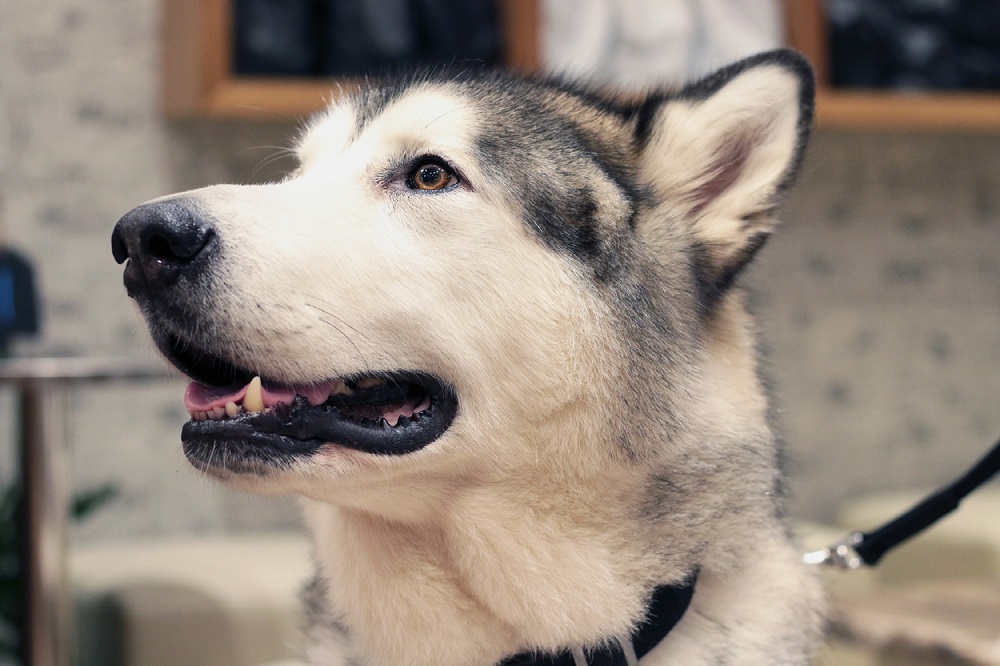 Koda is very loyal and her favourite place is near to my side. Once when we were in the middle of an expedition, things got a bit sticky. We were in a situation that we needed to get away from quickly! I needed her to step up to the plate and give me everything she had. She must have known because she dug deep and showed just what a Malamute is made of!

After my wife, my dogs are my best friends! Yes, they are working dogs, but they are family first! 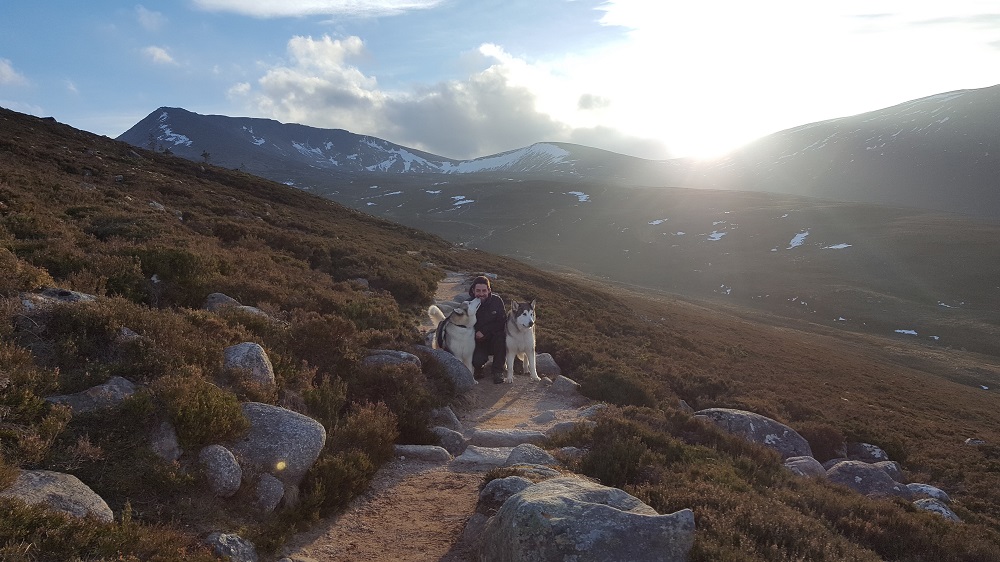 What does a typical visit to meet Army Veterans involve for your girls?

It’s normally a group session at Tedworth House. The group that we visit is the Rolling Recovery Programme which can vary in size and is usually a good mixture of lads and lasses.

We meet the group and introduce ourselves and the dogs. I then talk to the group about Mishka and Koda and about sled dogs in general. This may include where they originate from, their purpose, how you train care and work them. I invite the group to come up to get the dogs and stroke them.

It is at that point I like to stop talking and hand it over to the group – by this time they usually have a number of questions and the session then tends to become a lot more interactive and stays informal. It’s a mixture of asking questions and hanging out with Mishka and Koda.

After this, we take the session outside and show everyone the equipment used when sledding, such as the rig (a three-wheeled sled with handlebars and brakes), the different lines that are used and how to hook up a dog team. It is a bit technical but I find that the technicalities of working the dogs are always well received. 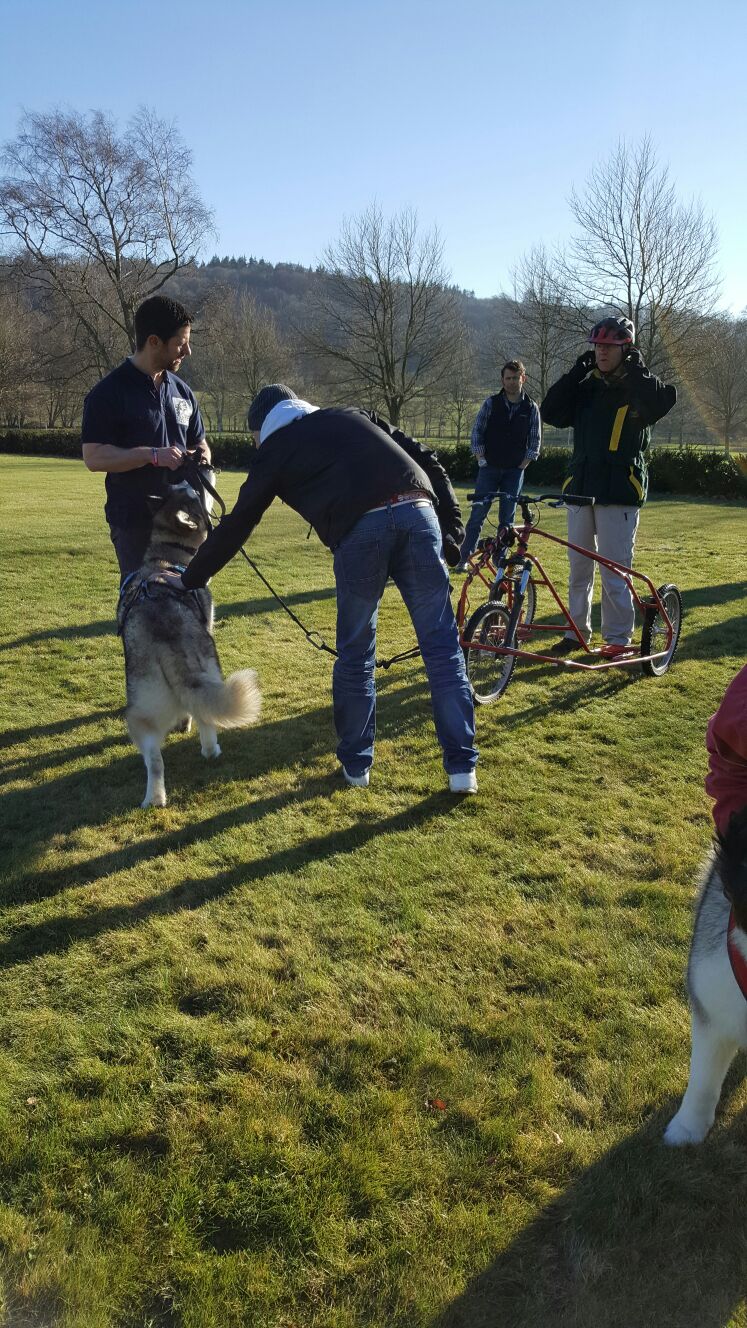 If cold enough I offer the chance for the group to get hands-on and have a go on the rig, pulled by Mishka and Koda. Those that are not too keen can have a go at handling the dogs. The group take turns at doing a simple straight 50m run (I run alongside the dogs for a bit of support and safety) and this activity gives people an opportunity to shout out the commands, motivate the dogs and feel them pull.

If the temperature is over 11 degrees centigrade, I prefer not to work the dogs so we will take the dogs on a short walk through the grounds at Tedworth. This can also be very powerful as the group aren’t only stroking dogs anymore, but have the chance to take the lead and care for the dogs.

This usually concludes the average session, but we very often hang around informally talking to those who approach us and want to say hello to the dogs.

Dogs can be great icebreakers, can’t they? Over the last two years, you must have lots of memories from your sessions, but do you have any which particularly stand out?

One springs to mind. There was one chap who when we met him looked a bit defensive. When I meet service personnel, I do not know any details of their specific difficulties. It may be something physical, it could be internal or emotional, or it could be both.

After a couple of hours with the dogs, he really began to open up. The biggest change was his smile! He started with a face like thunder and after playing around with the dogs he was beaming and he looked very relaxed.

Thanks to the dogs, he had dramatically come out of his shell. Later that afternoon he came to say goodbye and told us that he really needed that. This story can be applied to so many beneficiaries we have spent time with. 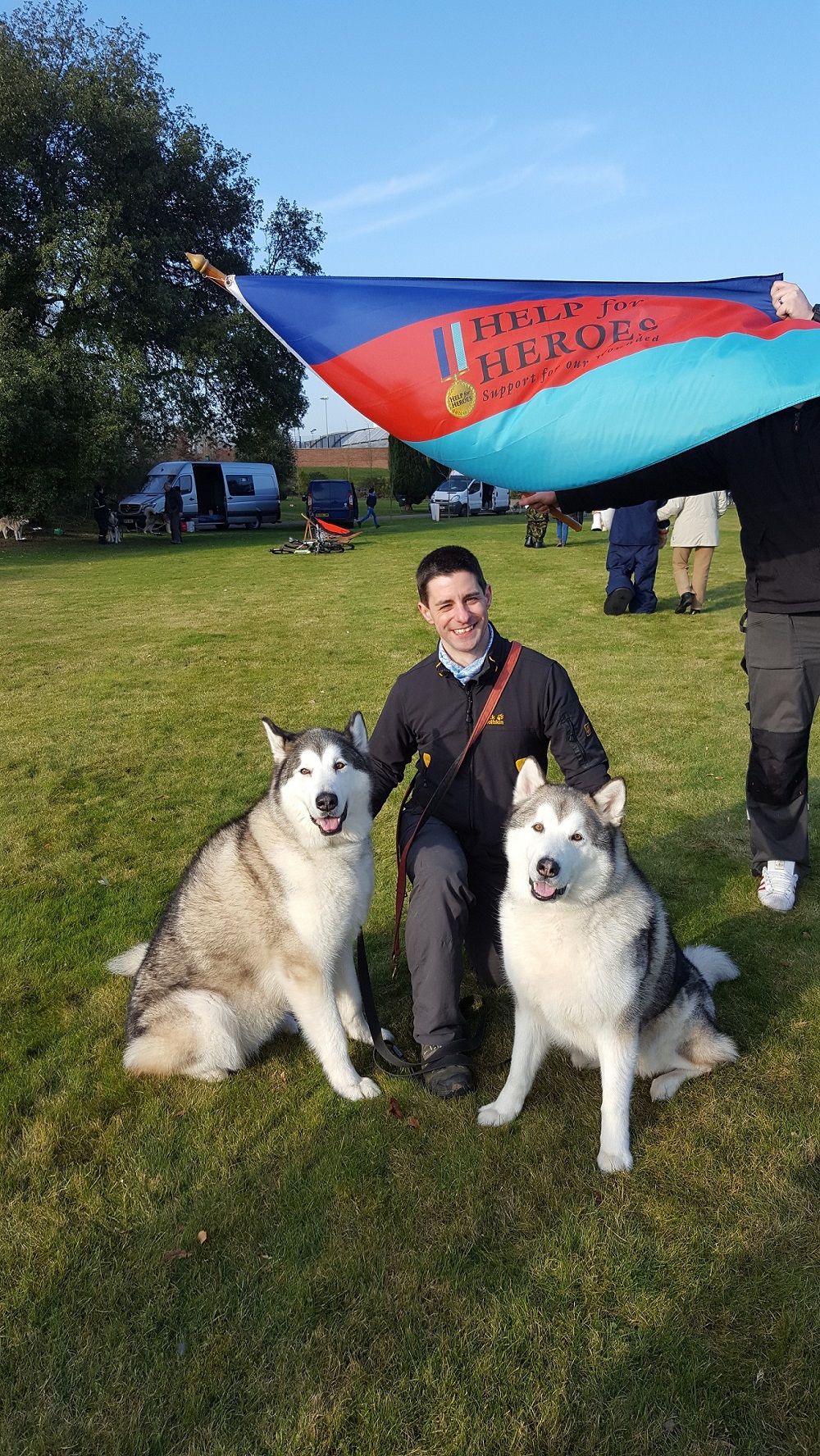 That’s lovely. Your girls became social media stars when the video of them (and you) meeting Elaine went online. What impact do hope the video will have on others in need of support?

I hope that it will encourage individuals who are struggling to reach out for help and see that they do not have to suffer in silence. There is help available out there and organisations like Help for Heroes are very passionate and driven in getting people the help they need and trying something new.

They open up opportunities for people that they would not have had otherwise, such as hanging out with sled dogs! I hope that anyone struggling will recognise that how they are feeling is okay. It is not a sign of weakness and they are not alone!

In my experience, the support available from Help for Heroes is incredibly varied; you do not have to settle for surviving day to day. It is possible to have hope and look forward to a bright future.