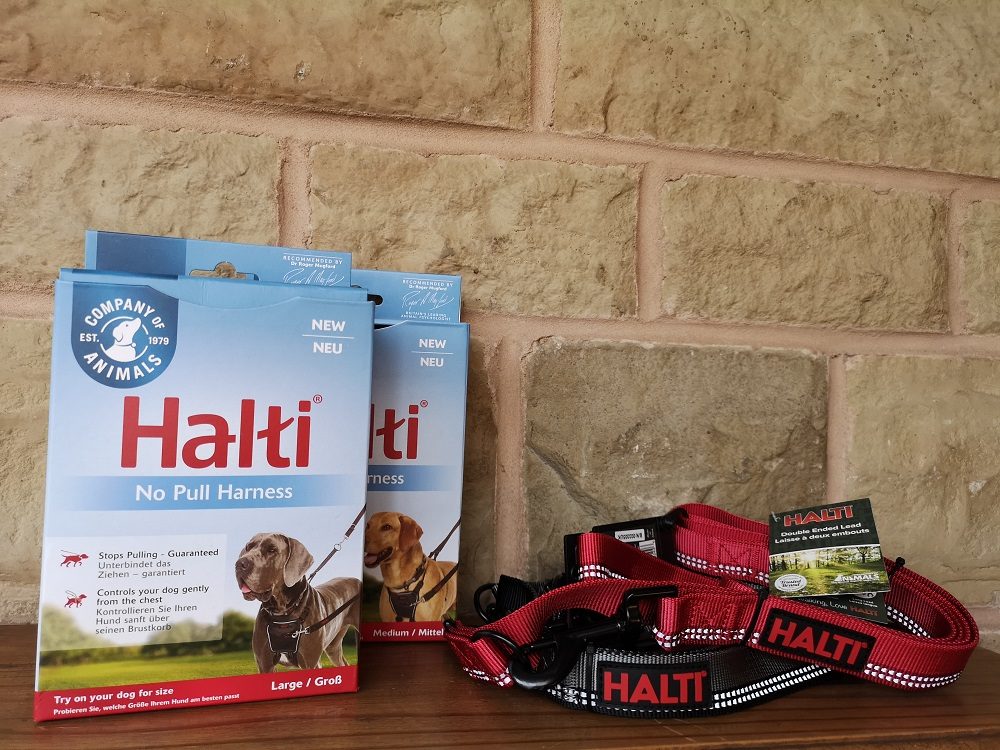 Let me share why I wanted to review the no-pull harness in the first place and then I'll explain.

I own three dogs. Danny, a Rottweiler cross Dobermann and Chris and Mia, both Rottweilers. For years, I was spoilt by owning and walking just two girls - Mia and Chloe, a Labrador. As girls, even in their younger days, both walked very well and were quite laid back about it all.

So when we first got Chris and Danny, it was an adjustment. Mia, slowing down then (and even slower now) has never been a puller like I say, but Chris and Danny are now both adults, Chris is 4 and Danny is 5 or 6.

Both have been trained and are good boys, but they are strong. When we first leave home to go for a walk at our local park, we have to pass various streets to get there and as soon as I open the gate to leave, there's always about a minute of excitement where they forget their walking manners while I'm busy shutting the gate behind me.

It's understandable that they get excited - the smells, the lampposts and so on - and they recover themselves well because they know what they've been taught to do, but I always feel if I walk either dog on my own, I want to know that whatever happens, if another dog runs up from behind and spooks them, for example, that I have enough control of my own on top of this to stop them potentially pulling because of their strength.

It's mostly a preventative measure needed for short bursts so I feel happier, quite honestly, and a few months ago I asked to review the HALTI No-Pull Harness.

The HALTI brand is well established and has a good reputation so I thought I'd start off on the right foot and the team kindly offered to send us their same brand Double Ended Leads to review too.

We received a medium for Danny and a large for Chris. Each arrived in a fuss-free box, easy to recycle with no unnecessary packaging - always a bonus. The leads arrived with a simple tag making them fuss-free too.

It's generally a very well made product and I love the padding around the leg hoops and mesh around the chest to make it comfortable and safe for dogs to use.

There are two hoops to clip your lead into - the first in the padded chest area and the second on top, which falls around the middle of your dog's back.

After unboxing, I wanted to work out how to use it so that I could put it on quickly when needed.

I only ever walk one dog at a time on my own so it's always a mission to get one out before the other two become aware of the other one's absence, so I thought by working the HALTI out, I could do that much easier.

After about 10 minutes, I gave the instructions to my husband and said 'you work it out'. He didn't really get them either and I was about to look for a Youtube video when I just happened to hold the harness in a particular way and the way it fell made it apparent how you are supposed to place it around the dog's legs.

The problem I was having was that looking at the instructions and photo on the front of the box, you know the padded chest area goes at the front, but if you put the collar over the dog's neck with the chest area at the front, the legs don't fall as they should. Or they didn't for me (and still don't) unless I put it on in a specific way.

1. Spread the harness over the dog's back to separate the legs and let them fall as they need to. This puts the chest pad on the back temporarily. Then, put the collar around the dog's neck.

2. Turn the harness around so the chest pad sits where it needs to and loop the legs.

3. Adjust the neck size if needed.

I can't really say for certain I wasn't having a blonde moment (having blonde hair I feel I can say that) but I can say it's unusual that it takes me quite so long to work something out if it's obvious. I've since looked at other reviews to see how others got on. One said they struggled to apply the harness because of how the leg hoops work and another said it can be inconvenient when putting on when your dog knows it's time to go out, so I'm not letting myself off the hook but perhaps it wasn't just me?

Once on, it seems comfortable to the dog wearing.

When I walk the boys I tend to take them on my own for a long walk to get some fresh air and R&R just the two of us and we'll go to the park and play football too, so anything they use or wear has to be comfortable to them while they walk or run. The HALTI has proven itself to be comfortable.

The Halti No Pull harness works on the premise of 'squeezing and lifting' according to the team behind the product who say, "the harness tightens on the dog when they pull on the lead. This will ultimately deter the dog from pulling and will return them to normal controlled walking. A sliding security cord lock prevents over-tightening."

The first thing I did once I'd checked the padding around the leg hoops was sitting fine was to adjust the sliding security lock reducing the flexibility of the straps so the squeeze and lift effect could work.

This is something that I noticed manoeuvred itself a lot on walks, especially with Chris. I'd adjust at the beginning and 10 minutes into the walk, it'd be looser than I'd adjusted it to before we set off. This meant I was constantly monitoring and adjusting. A toggle to prevent movement might help. Even if it was set to give a little leeway, it would stop it needing to be re-adjusted so often.

We received two leads, one for each dog. One in black to match the HALTI and another in red, which is a lovely colour. I'd imagine the blue and purple colour options are also very striking. Both leads have a new style of metal clip for added security, Halti say.

There is a reflective strip woven into towards the outer edge of one side to provide high visibility on walks in darker mornings/evenings and it's also machine washable.

So, what's the problem with the lead?

Well, I'm around 5 foot and I say this to give context to the length of the lead because it's very long, in fact even my husband thinks this is the case and he's a taller than me (to be fair, most people are).

The lead has multiple metal hoops so you can shorten it but even at it's shortest length, basically halved, it's very long. Too long for me and most definitely too long for what I'd consider a short/road length as the instructions say it's suitable for and by having to turn the lead four or five times around my hand, it made it quite slippery.

There are eight ways it can be used but I didn't really find I got the benefit of any because of the length and I wouldn't use the tether option in the way described in the current era of increased dog thefts.

On the instructions, it shows you can clip both ends of the lead into both hoops on the harness. This seems to make it incredibly awkward for my dogs to walk, Danny point blank refused the first time, so when I bumped into our vet nurse out and about, I asked her for advice because I know they sell HALTI products in the vet practice and she seemed stumped, suggesting I just use the hoop/clip towards the back and twist the excess lead around my hand.

HALTI's products are well priced for the market, in fact, there are others a lot more expensive, so the cost alone might make them worth a try if you're considering whether you might benefit from extra control over a pulling dog, whatever their size or strength.

I do think, whether it's my own state of mind or not, that the HALTI No-Pull Harness did probably help ease pulling a little in certain overexcited moments, but I couldn't say for sure.

Mostly, it gave me peace of mind and a little confidence that I probably had a little more control to combat their strength if/when needed, the reality might have been different.

I don't think it's an easy decision to switch products like this because it's all about safety, isn't it. I'll probably keep using the harness but give the lead a miss in the future, I have another that can do a similar job without as much excess fabric being twisted around my hand.

HALTI No Pull Harness Review - Does It Work?

How to Get Rid of Dog Smells in the House

As pet owners, we all love our dogs, but speaking from personal experience, keeping a house clean, fur and smell free can be a...

Emma Milne: ‘Every Vet Knows Someone Who’s Killed Themselves’

Ever since she was seven-years-old, Emma wanted to be a vet. Animal-mad, she watched all the animal programmes, worshipped David Attenborough and wouldn’t consider...

Over the last few years, police dogs have been celebrated more than ever, thanks to the efforts of the family and friends of a...

In This Issue... Talking Point: Do Dogs Personalities Change? Behaviour: Could Sleepovers Be the Answer to a Dog’s Anxiety? Lifestyle: Actress Courtney Hope Introduces...