Across Africa, rhinos are fighting for survival. Only around 5000 black rhinos are left in the world and the white rhino is also a threatened species.

According to experts, every seven hours a rhino loses its life as poachers seek to sell the rhino’s horn. Sadly, trading rhino horn has become a highly lucrative illegal trade in a market worth $17 billion annually with people buying the horn for its alleged medicinal properties.

Conservationists know dogs are a powerful deterrent to poachers and in a move to help rhinos breed in safety and increase their numbers, anti-poaching rhino protection dogs have been trained and sent to Botswana, Kenya and Zimbabwe by the Real World Conservation Trust (RWCT) to stop poachers in their tracks. 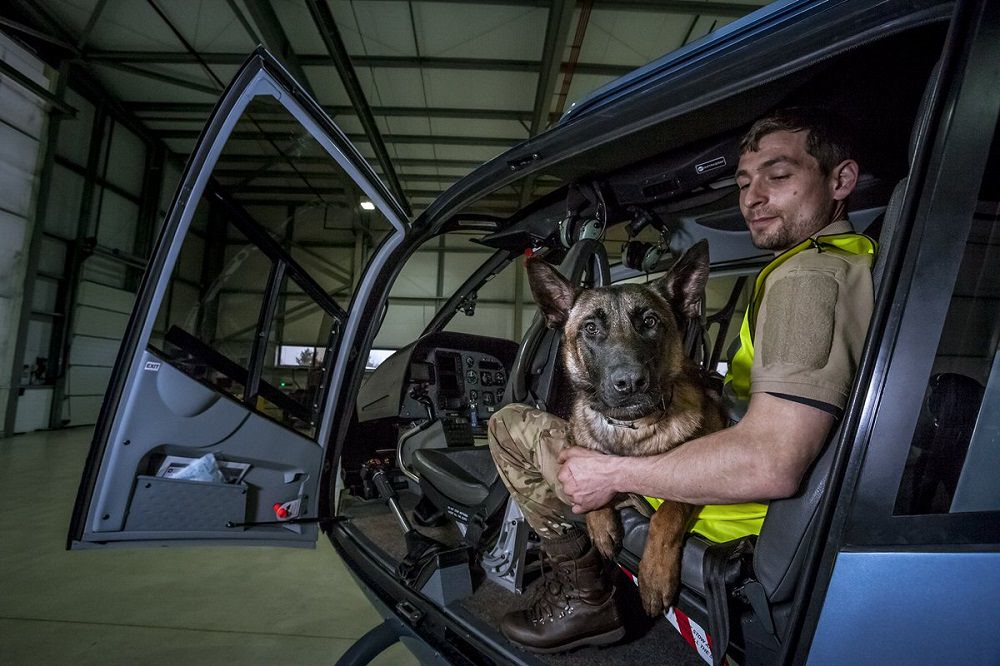 In 2017, Vaala, a Malinois Belgian Shepherd was successfully deployed to the Save Valley Conservancy in Zimbabwe after she completed training with RWCT’s partner, Animals saving Animals. 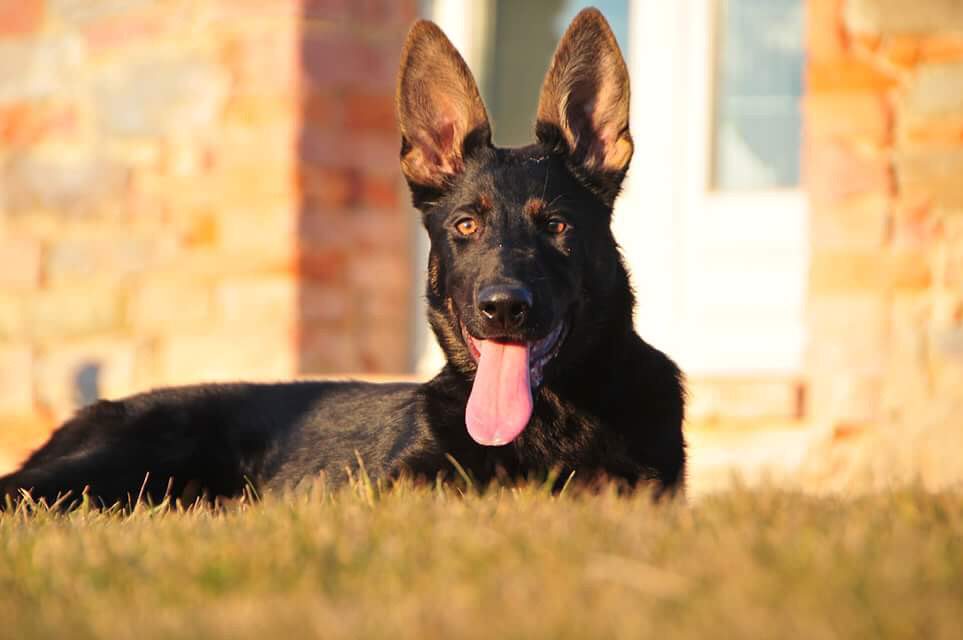 This is Vaala / Photo Credit: ASA and RWCT

Alongside two other dogs Rogue and Polaris, she now works across a 3,000 km reserve which is home to one of only eight viable black rhino breeding populations in the world.

Most recently Vaala and her team caught four poachers with rifles. On further investigation, one of the rifles captured was linked to a shooting in Harare of a woman and eight other rhino deaths. 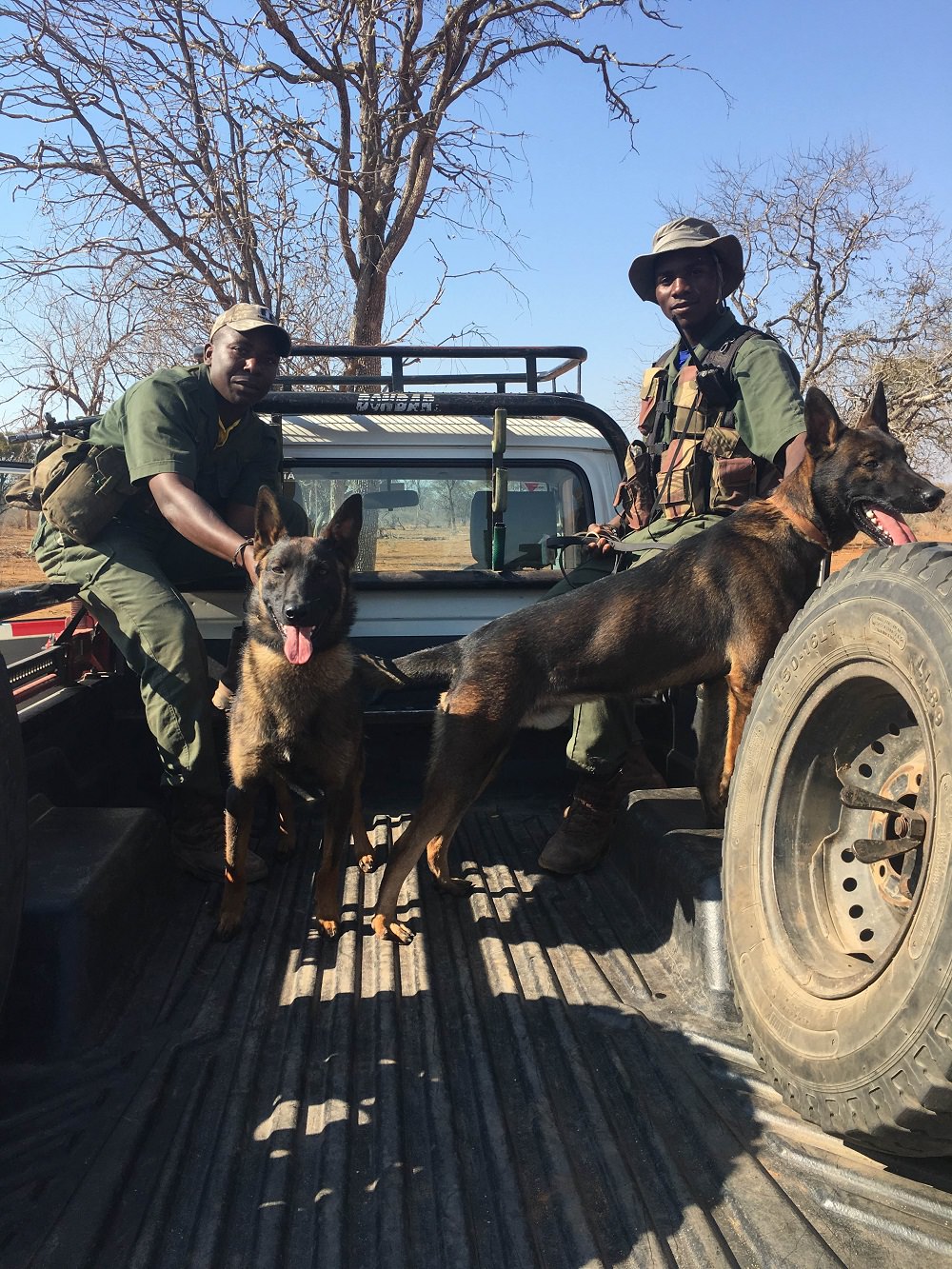 Rogue and Polaris pictured on patrol with Costain and Samuel / Photo Credit: ASA and RWCT

This Summer, two other Belgian Shepherds, Primaa and Savas will be deployed when their specialist training concludes to help Rhino Conservation Botswana (RCB).

Botswana could prove to be the rhinos last hope because conditions in the country are perfect for rhinos, with security, space, food and water, enabling the animals to relax and breed. 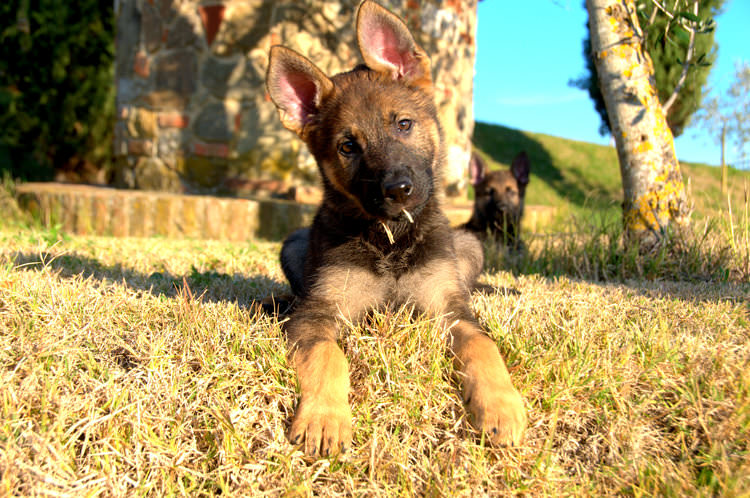 Primaa and Savas will work across Maun and the Okavango Delta to search out illegal wildlife products, track down wildlife criminals and deter poachers. 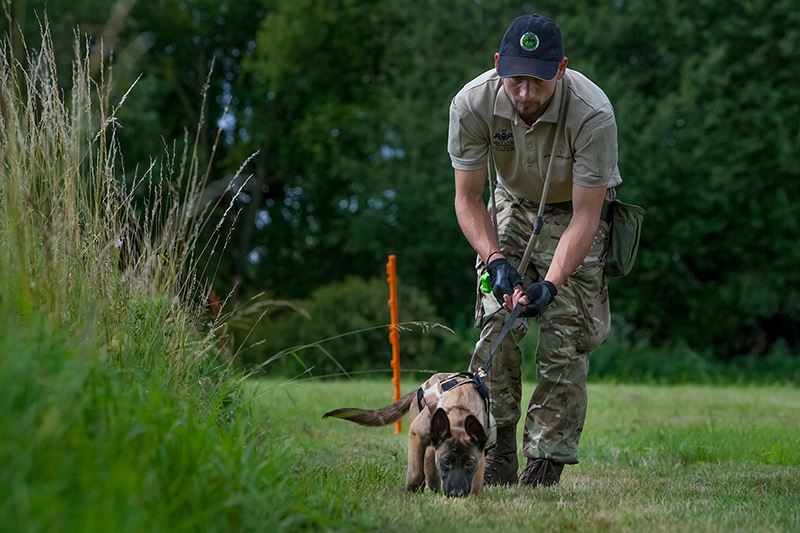 The Real World Conservation Trust (RWCT) tell us, “We contacted RCBs founder Map Ives back in Spring 2017 about the power of rhino protection dogs after meeting and chatting to their Royal Patron HRH Prince Harry The Duke of Sussex at a wildlife conservation event in winter 2016.

“We hope Prince Harry, who is passionate about conservation, will have an opportunity to meet the dogs once they have been deployed.” 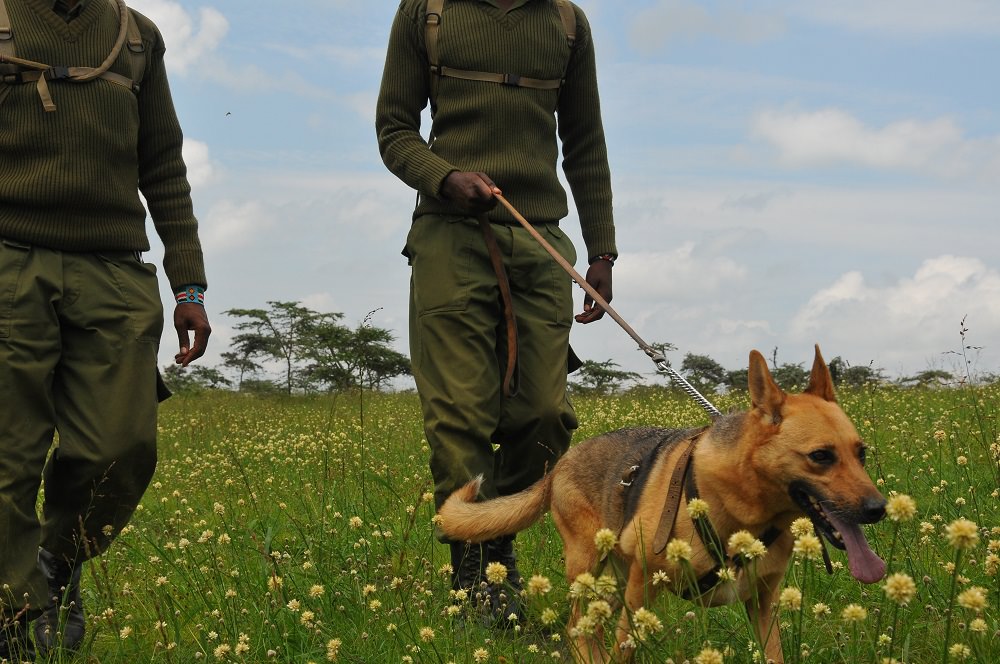 Later this year, the conservation trust plans to send a new tracking Spaniel dog to the Ol Pejeta Conservancy in Kenya, home to the last northern white rhinos in the world.

What makes the dog perfect for the job

Conservation organisations are turning to dogs to help protect wildlife because it would take up to 60 rangers to cover the same amount of ground one dog can in the right conditions, and because of the dog’s superior senses, dogs can track at night.

Plus, dogs can’t be corrupted or bribed and will work seven days a week with the right care and rest. 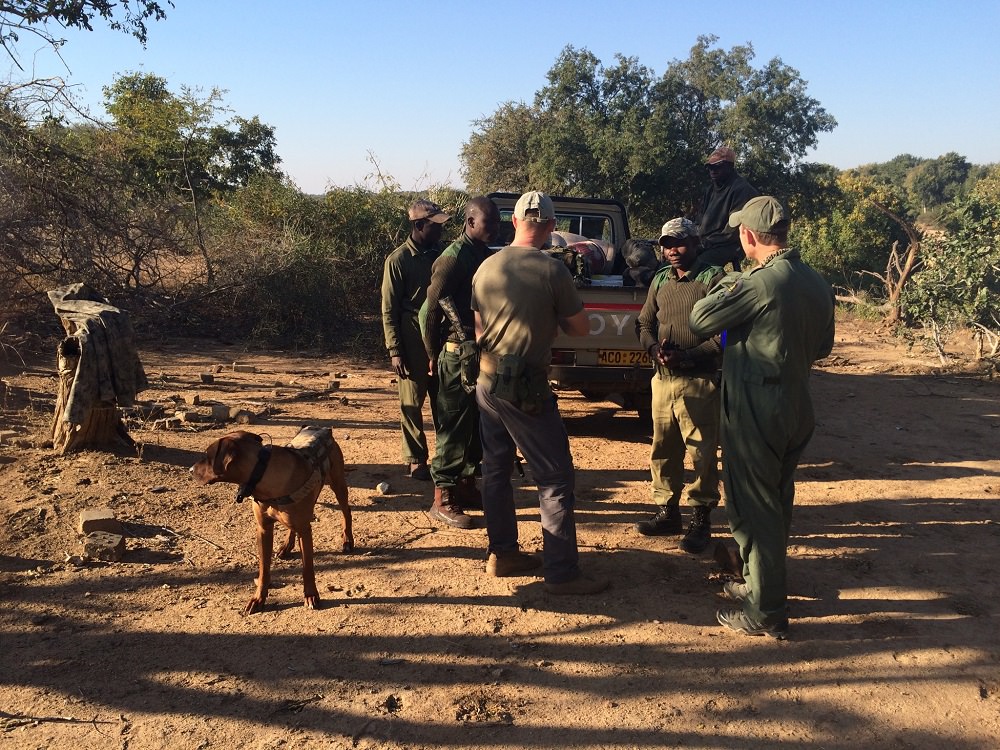 Typically Belgian Malinois are favoured as anti-poaching dogs because according to RWCT they are ideal for the ‘triple role’ of search, track and attack (these dogs can chase a target at 32km per hour before exerting 240psi of bite pressure once caught).

Malinois are intelligent, loyal, agile, sturdy and equally skilled at tracking, detecting, guarding and apprehending poachers. Other favoured breeds include Bloodhounds and Spaniels, which are specifically utilised for tracking. 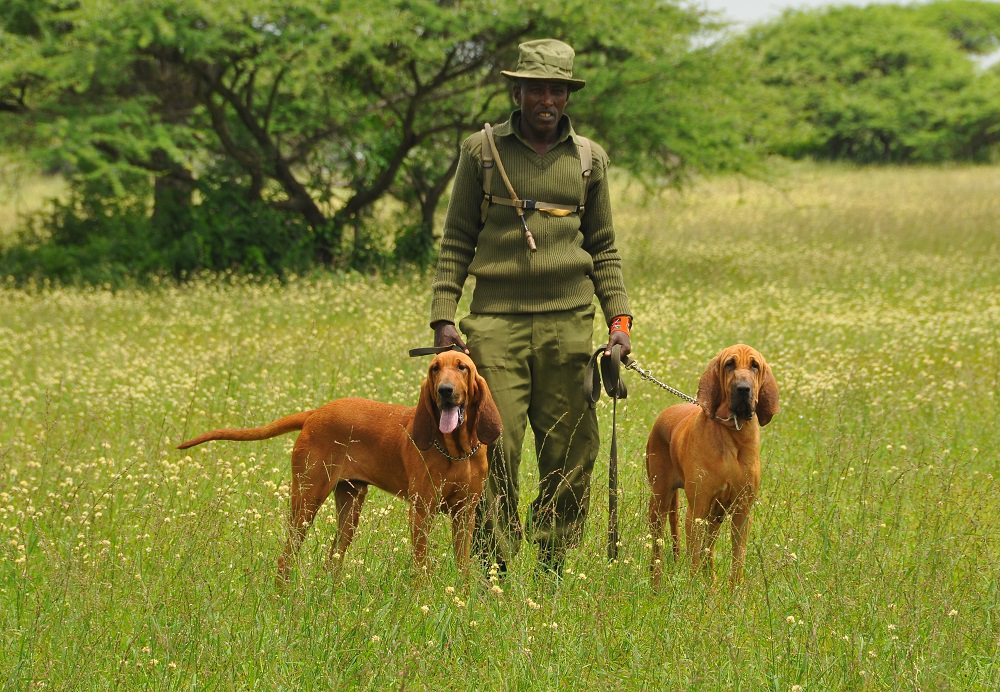 How anti-poaching dogs are trained

According to RWCT, specialist training starts at three months after the puppies have been assessed for suitability because not every dog is right for the role. 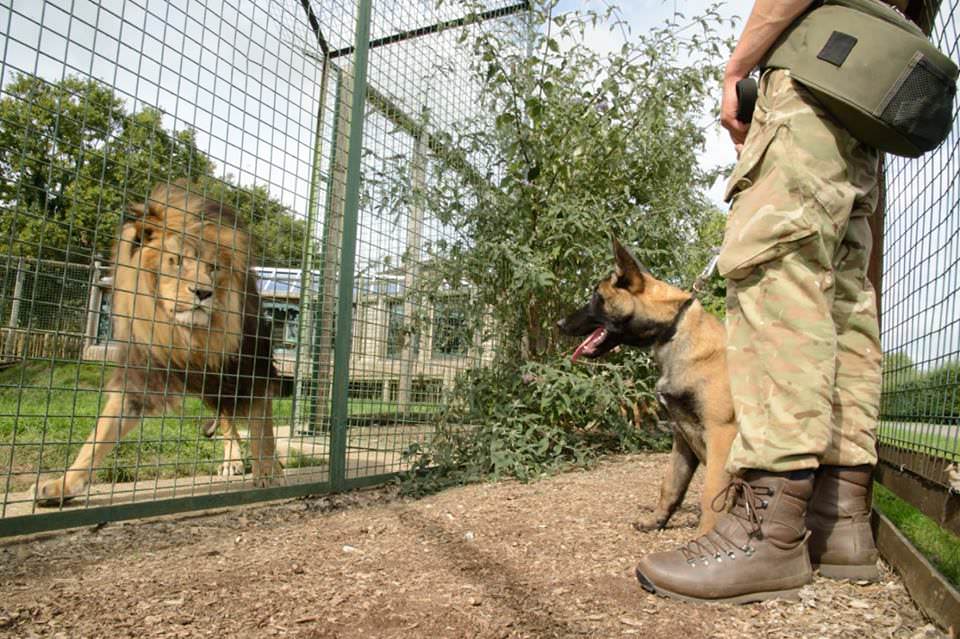 “Extensive training is conducted including visits to local zoos to acclimatise the dogs to the sights and sounds of Africa. Taking to the skies in helicopters is another essential element of their training. This allows rhino protection teams to deploy quickly to the scene of an incident.

"Once the dogs are deployed to Africa further training with the dogs and their new handlers includes working on both handling and tracking. These visits are repeated, with ongoing support provided.” 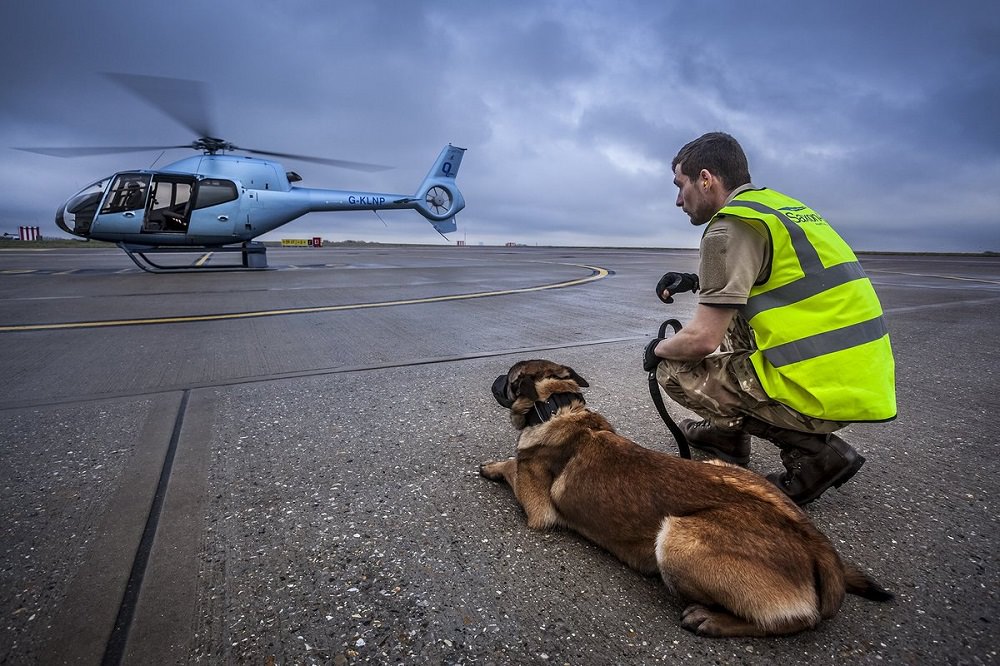 Training dogs for this specialist role come at a cost and as a result, RWCT has launched their latest campaign called ‘Selfie for Survival’ – a free initiative where they are asking dog owners to share a selfie of them with their dog(s).

All the submitted photos will be combined to make a giant elephant wall mosaic and will be exhibited on a national gallery tour this autumn, including a week at gallery@oxo on London's South Bank, The Conde Nast Luxury Travel Fair at Olympia and Wildlife & Safari Show at Harrogate Convention Centre in Yorkshire among others. It will also be exhibited at the Explorers and Salmagundi Clubs, Manhatten New York in November. Postcards of the mosaic will be available to purchase at all the venues.

The purpose is to raise awareness about the role of dogs in wildlife protection, along with their latest project with African Parks. The trust aims to raise $50,000 to fund a new canine unit to save elephants currently being targeted by poachers at the Garamba National Park in the Democratic Republic of Congo.