Lassie, the Andrex Puppy, Well’ard and Lucky are just some of the nation’s favourite TV dogs. Do you ever see Emmerdale's Tootsie strolling around the village and think to yourself, my dog could do that? Perhaps he could, but would you know how to get the little guy on TV to show off his rare talent? Here is the K9 interactive guide to turning your pet into a small screen star, with lots of fun steps along the way.

Finding the best way onto the television: You need to establish early on what you think your dog will be a good at and what he may struggle with. For example, a well trained, agile and obedient dog may be suited to actual acting whereas, a slightly less biddable dog but who can do the ‘cute puppy look’ without even knowing it may be better suited to appearing as a model, such as the Dulux Dog. To be able to act in television programmes, you need to be aware that you and your dog will spend most of your time waiting around for someone to call you. And remember, no matter how obedient and eager to please your dog is, it is likely that once he performs a command perfectly, he will be required to do it again and again until the lighting is perfect or the angle is right. He doesn’t know why he has to repeat the same exercise over and over again, and he may well get a little bored. 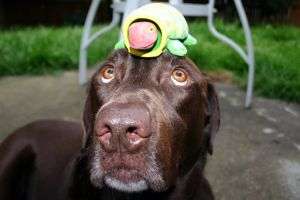 Creating the CV. Now that you have established that your dog will be better suited to an area of the entertainment and media industry over another, it is time to ‘sell’ your dog to the people that matter. There are agencies that specialise in providing animals to the entertainment industry. Cathy Cott is the founder of A-Z Dogs and she has supplied dogs to clients such as The BBC, Channel 4 and Warner Bros. Her dogs have also appeared in adverts for IBM, Coca-Cola, Hush Puppies and Tesco.

She explained that for her to recommend a dog to a client, it needs “to have a relaxed and calm temperament, as television shoots can be exciting places to be for a dog. Most importantly the dog also needs to be extremely well trained and obedient. Producers simply cannot afford to waste time waiting for a dog to decide that he feels like doing as he is told. When you do your CV, it is useful to include all of the ‘tricks’ that you know your dog can do with no problems, as well as any classes he may have taken, such as agility. It is also important to include whether he is comfortable around other animals, children, in the city, on a farm and so on. If he hates horses, include that, but don’t lie about it as it could all end in tears.”

Creating the portfolio: This can be a lot of fun, and if nothing else will provide you with some priceless images of your dog in his finest hour. Cathy explained what she looks for when searching for the right dog. “The portfolio should obviously contain good quality images, long distance, grainy snaps are no good, as we need to be able to study the dog. We always look for a unique animal that has character. The portfolio should include a profile shot, a mug shot and as many different and interesting shots as you can get. I like to see dogs along side people, playing, maybe with something in their mouth  Try to get your dog in lots of different environments though, to show him off in as many ‘roles’ as you can.”

Have their people call your people. Now that you have your CV and portfolio ready, the next step is to get in touch with people who can put your dog forward for roles, this is called an agent. They will find roles that are suitable for the dog, taking into account his skills, his appearance and his availability. When approaching an agency, make sure that they are aware of anything that your dog cannot or will not do, so that you don’t end up in an awkward situation on set. The agent should be able to tell straight away upon meeting the dog whether he is right for a certain role. If your dog is not particularly skilled but has a unique and loveable face, he may be perfect as a ‘still model’ on an advert.

The big day. All the hard work has paid off and it is your dog’s first day on set. Remember step one, there will be lots of waiting about, so take plenty of toys and food. Be on hand to instruct your dog, and remember that it should be fun for both of you, just another activity that you can enjoy together. Your dog has no idea he is on TV, so don’t be too put out if his career is short-lived, he certainly won’t care too much.