My dog often causes me to sit up and think. It’s one of the great joys of owning any animal, they can’t talk to you and they can occasionally raise more questions than answers, certainly in the case of dogs. Why do they insist on sticking their head out of a moving car but hate it when you blow in their face? Why do they drink out of the toilet or puddles when they have a fresh bowl of drinking water? Why do they all seem to love cheese?

With all the questions I have about dogs, K9 Magazine has stepped into the breach with a new feature, K9 Science, which will set out to answer some of the more complex canine conundrums in a simple, plain English approach. To get us under way I thought we’d begin with a question I asked myself recently when I was struggling with a cold. I accidentally sneezed on my startled dog and wondered to myself, “can dogs get flu?”

The Origin of Influenza

The word influenza derives from the meaning to influence, or "the ethereal power of the stars acting on men." In the sixteenth century, it was believed that sufferers of flu like syndromes were being ‘influenced’ by a supernatural force.  During an outbreak of the flu in Europe during the eighteenth century, the disease became officially known as influenza and subsequently as ‘flu’. 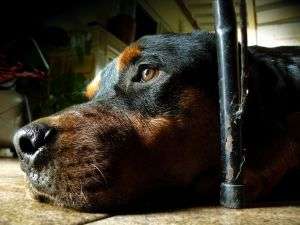 A pathogen is any living organism that can cause disease but is either usually bacteria, fungi or a virus. The way a pathogen is constructed determines its abilities to infect their victims. Dependent on geometry, some pathogens can fix themselves to most living things and some to just one. Immunity happens when the receptors of the animal and the receptors of the pathogen don’t fit. Successful pathogens act like skeleton keys, with quite a geometrically general binding receptor where they have a shape that fits many different receptors. The ones that don’t fit tend to mutate to ensure that they can fit in future.

The flu is one of these viruses and is capable of infecting most birds (in fact, most cases of flu began with a bird, so each time we have flu, it is actually bird flu), as well as many other species. The other thing that it does, which enables it to infect as many species as it does, is to evolve or mutate. This allows it to cross multiple species barriers and attack pigs, cows, horses and of course people. This partly explains why the flu virus caused such a panic at the end of last year, the virus had evolved and had become unrecognisable to the our immune systems, in a similar way to the Spanish flu was early last century.

The Spanish flu outbreak was the largest pandemic in history, killing 50 million people died. So what happened?

Usually when we get flu, it is more of a hassle than a life threatening illness, although it can cause severe discomfort. Our body is familiar with the pathogen that causes flu and is able to recognise the virus, meaning that the immune system can deal with the problem.

When a virus manages to mutate to a degree that our immune system does not recognise it, we encounter serious problems. The Spanish flu virus is believed to have passed a species barrier, having hybridised inside pigs (pigs can catch bird and human flu) and came to the sufferers as a new strain of flu that the body didn’t recognise.

This is what happened at the end of last year, when a completely unknown strain of flu arrived after mutating enough to infect us (dubbed: H5N1, for the specific proteins found on it). With birds being able to fly from continent to continent, and with the huge amount of aviation, it is not surprising that the virus managed to spread, and would have spread regardless of precautions taken by man.

What many people don’t realise about flu is that being a zoonotic disease (meaning it can be passed from one animal group to another) is that other animals have developed ways of dealing with and fighting off diseases that we still suffer from. One of the most infamous and publicised zoonotic diseases is Human Immunodeficiency Virus (HIV). This is prevalent in other species, notably felines and primates.

HIV is strongly believed to have developed from Simian Immunodeficiency Virus, only decades ago. There are cases of monkeys with SIV that now live with the virus and show little or now ill effects and it rarely kills. This is because their species will have lived with the virus for such a long time that the pathogens are familiar to the body, and the immune system is able to handle the virus. Some studies have even showed monkeys carrying a similar viral load to a human with advanced AIDS who do not suffer or die from the virus.

Establishing that flu is potentially caught and given by different animals, suggests that it is possible that your dog could catch flu, after all, diseases such as TB, Malaria and Measles have been swapped between apes and humans and humans and other animals, in fact we are quite good at giving other animals our diseases since a lot of animals become part of our lifestyle, in the same way as we carried foot and mouth disease from farm to farm without really suffering ourselves.

So to answer the original question, in theory it is very possible to pass on the flu to our dogs, so remember to cover your mouth when you cough.