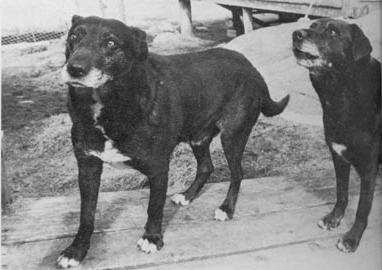 This isn’t homage to dogs that did good things, K9 Magazine has plenty of those in the archives. This is a reflection on which dogs have influenced and changed the world in which we live. Dogs who have been party to events that have shaped the future, dogs that showed us something new and dogs that started something special.

And so, onto our countdown of the most influential dogs...

What Did This Dog Do? She Was Sentenced To Death For Being Ill.

Dempsey was a female American Pit Bull Terrier, who died in London in 2003. Eleven years before, Dempsey became involved in a high court battle, which lead to Bridget Bardot offering her sanctuary away from what was at the time, nonsensical British justice that had lead to her being sentenced to death, she caused a media storm and forced a rethink on the Dangerous Dogs Act.

While being walked one evening, Dempsey became unwell. The person who was walking her, not her owner Dianne Fanneran, removed her muzzle so that she could be sick. Two police officers spotted this, and in accordance with The Dangerous Dogs Act 1991, deemed that since Dempsey, who was on the list of banned breeds and was therefore not allowed in public without a muzzle, was briefly not wearing her muzzle and that she was in breach of the act.

She was sentenced to death at Ealing Magistrate’s Court under The Dangerous Dogs Act 1991 for being unmuzzled in public. Upon sentencing Dempsey was put in secret kennels for three years.

It took a legal technicality, namely that it was not the owner who removed the muzzle and the actual owner had not been informed about the first hearing, to get the case to a final appeal. Two high court judges finally ruled in 1995 that there had been a “breach of natural justice” and spared Dempsey her life. She lived on until seventeen years old.

How Influential? Until recently with cases in Northern Ireland featuring Bruce and Lennox, Dempsey's case is the most famous test case involving the act. It forced courts to give more consideration to the term “type” as outlined in the text of the act. Prior to Dempsey’s case, courts were advised that “type” referred to dogs resembling banned breeds, but after the case, the act was criticised for not allowing magistrates sufficient discretion in interpreting “type”.

What Would Have Happened Without This Dog? The Dangerous Dogs Act 1991 would have been interpreted with even less discretion and more dogs would have been put down that did not pose a danger to the public.

Will Bruce or Lennox be the next two most influential dogs in bringing about further reviews to the Dangerous Dogs Act making it a more fair act where dogs are based on actions instead of looks?

What Did This Dog Do? It provoked a riot which set the standard for modern animal welfare.

The Brown Dog affair was a political controversy that occurred during the first decade of the Twentieth Century, paving the way for modern animal welfare and anti animal testing lobbies in the UK. If it wasn’t for The Brown Dog, an anonymous subject of vivisection that was killed and then later immortalised as a statue, the debate about vivisection would not have happened. Riots happened in and around University College London in response to the inscription on The Brown Dog’s memorial, which read.

“In Memory of the Brown Terrier Dog done to Death in the Laboratories of University College in February 1903, after having endured Vivisection extending over more than two months and having been handed from one Vivisector to another till Death came to his Release. Also in Memory of the 232 dogs vivisected at the same place during the year 1902. Men and Women of England, how long shall these things be?”

Medical students were outraged and libel suits were filed from many sides, but for the first time in history the realities of vivisection and animal testing were brought to the attention of the public and a debate was raised that still continues today.

The Brown Dog became a symbol of the oppressed for writer Coral Lansbury, who compared him with the plight of workers, women and animals as he examined the effects of the riots.

"That cruelty can be extraordinarily satisfying cannot be denied, for cruelty is a magnifier of identity, a simplifier of social function, and the temporary resolution of insecurity and doubt… Cruelty relies on a rigid observance of the categorical distance between victim and oppressor." (Coral Lansbury, Old Brown Dog)

How Influential? The Brown Dog represents all of the dogs that had, up until 1903, been the subject of vivisection. The Brown Dog became a metaphor for the realities of animal testing, whether for right or wrong, and empowered the public to voice their opinion on the matter in full knowledge of the facts for the first time.

What Would Have Happened Without This Dog? If it wasn’t for The Brown Dog, people wouldn’t have felt compelled to protest and the matter of vivisection could have been clouded in uncertainty for many more years, holding up the animal welfare movement.

What Did This Dog Do? Acted as a link between the Newfoundland breed and modern day retrievers and unveiling the world’s most popular pet dog.

The St John’s Water Dog was a relative of the Newfoundland, it was often referred to as a lesser Newfoundland. When the breed was exported from Canada to England, the St John’s Water Dog breed split into two. The larger ones went on the become the modern day Newfoundland, whilst the smaller ones became Labradors, which in turn spawned other breeds such as the Golden Retriever, Flat Coated Retriever and Curly Coated Retriever. Over time, the Labrador has become the world’s favourite dog breed, but it all could have been different if one dog wasn’t spotted as being something special.

One St John’s Water Dog specimen was spotted by the third Earl of Malmesbury, who told a friend that he wanted to take that dog and continue its breeding and keep that dog separate and pure, he would call it a Labrador in honour of the region close to Newfoundland. The Labrador breed was officially established in 1903 and the rest is history.

How Influential? This now extinct breed developed into what has become the world’s most popular dog breed.

What Would Have Happened Without This Dog? Dogs may not have been as popular as they are today as pets, guide dogs may have experienced a slower ascent to becoming the indispensable companion and assistant that they are today and retrievers as a group may not have developed.

Inside this edition of K9 Magazine.... Talking Point: Love Your Life With Dogs (even more!) Interview With Hollyoaks Girls Alex Fletcher & Stephanie Davis...

Stephanie Davis is best known for her role playing Sinead O'Connor in Channel 4's soap Hollyoaks. Some readers might also remember her from her...

The UK’s Most Pet Friendly Places To Visit

A recent survey released by Confused.com revealed that 27% of dog owners are planning a round trip of up to 101 miles to give...