Gail Emms is best known for representing Great Britain as a badminton player winning medals throughout her career, she most notably won a silver medal at the Olympic games held in Athens in 2004. Gail is currently working for the BBC commentating on the London 2012 Olympic games.

Kim O'Meara caught up with her to find out all about her beloved pal, Rafa, and to hear all about her experiences on Dancing on Ice's Olympic special.

Rafa is a 5 year old Westie. I got him as a present for my 30th birthday. I had a Westie when I was younger and adored the breed. I thought about our house, the size of our garden and so I knew I didn't want a huge dog. I'm also allergic to a lot of hair and Westie's don't moult so everything seemed to be pointing towards getting a Westie.

We really researched as much as we could to find good breeders. We found some so we went to visit and they had a litter of puppies.

(Laughs) My boyfriend said at the time if we're having a Westie I want the biggest boy. His breeder said to us that he was a really good choice. She said he was a lovely boy, not noisy and very loving and she was absolutely true. He's a really big softie and only barks at squirrels!

I'd say I've always been a dog person, I'm allergic to cat hairs so I'd never considered getting a cat, and my life is quite outdoors-y. I love being outdoors whether riding a bike or going for a run and Rafa loves to come with me.

We didn't really grow up with a lot of animals in the family. My sister had a hamster, I wasn't a huge fan of small animals because they were so little. We had a Westie when I was around 5 years old but at the time my dad was away a lot and my mum had three small children to cope and my mum felt the dog wasn't getting enough attention so she went to live in a really lovely home with some family friends.

Then when I was around 12-13 years old my parents split up and so my mum decided it would be nice for us to get a dog to help cope with the break-up. So we got a Yorkshire Terrier, who it turned out wasn't actually a Yorkie, but looked like one. Sadly she got cancer of the liver and passed away at 7 years old.

We're currently at the exciting start of the London 2012 Olympics and full of home for our stars as they compete. You retired in 2008 but notably won medals in 2006, 2004 and 2002. What are you most looking forward to about the London event as it rolls out and do you wish you were still competing?

It's a bit of both to be honest! Part of me wishes I was still competing and I'm jealous not to be competing on court because the Olympics is such a great event. The adrenalin rush you get from the crowds cheering us just unreal.

That said I don't miss the travel and training that came with competing. I love the fact that this is a new chapter for me and I'm part of the BBC commentary team for the Olympics which is exciting. I have a two year old now and I can have a glass of wine without worrying about training so this is really a new stage in my life and I'm excited about what's next. 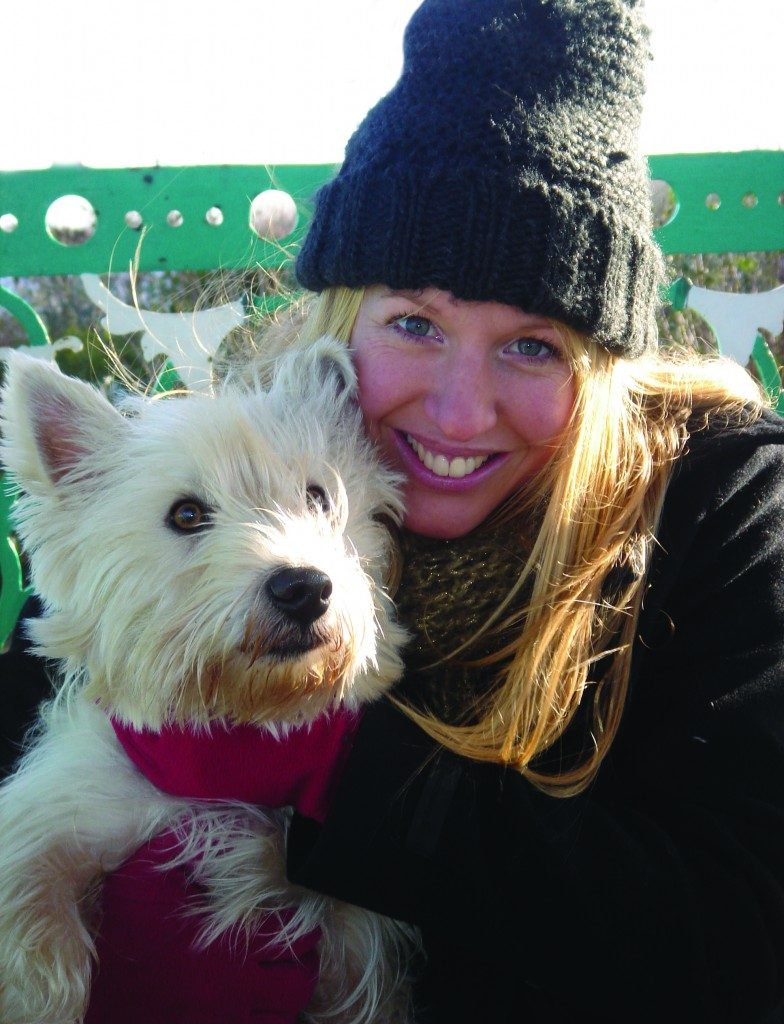 And you recently took part in the Dancing on Ice Olympic special which airs this month. With 6-7 weeks training, it seems like it was a pretty intense and fun experience! Did you expect to enjoy it as much as you did?

(Laughs) Well I went into it thinking 'I'm an athlete, I can do it!' - yeah right, I got such a shock! I like to set myself challenges in life, whether it's running a 10k race or something completely new and I always encourage people to have goals and get out of your comfort zone.

I have to say ice skating turned out to be so far out of my comfort zone it was ridiculous! I can do any sport really, I can pick up a racket and hit a ball, I can get on a bike and go miles, but with ice skating I was falling over and then you add having to do it and dance, have your make up and hair done and all the glitter – but I have to say I was converted by the end. I lost 4kg in 6 weeks and felt such a transformation. I came out of it with a whole new appreciation for ice skating, the training involved what people go through on the show!

Having been involved for so many years, what will the last few months have been like for the athletes taking part?

It would have been like preparing for the biggest exam of your life. Everyone would have had lots of different emotions going through their mind. There would have be excitement of course mixed with panic as they wonder if they had prepared enough and you'll have asked yourself 'have I done as much as I can?' Their heads would have been like a tennis court with thoughts going back and forward.

How did you cope with training and being away from home, Rafa and your family and friends?

I got Rafa when I was still competing and I think one of the best things was coming home to him after training or being away at a competition. He wouldn't care if I'd lost a match or done well, he'd be the same whatever the result.

For most of the time I was travelling abroad so Rafa couldn't have come with me, but I did love that feeling of getting home, walking in the door and that amazing greeting you'd get.

I think he, and probably all dogs, are great stress relievers. When I got home I could just head out for a walk with Rafa and all the pressure of sport would start to fade and my head would clear. He really helped me.

Do you have a motto that you live your life by? What would you say Rafa's motto might be?

I don't really have a motto but I do always think you should be a good role model. My mum is a massive influence to me and always encouraged me to try new things. Now I'm a mum I feel the same way. I'm hugely proud to have represented my country and if I can encourage someone to follow their dreams to do the same, then I'm happy to do that.

Rafa's would probably somehow orientate around squirrels and be something like 'I love squirrels more than life'.

I love him to bits but I do wish he'd realise he can't actually follow them and climb up trees. We can be out having a lovely walk but I know once he spots a squirrel he'll be off chasing them. He's probably the fittest Westie I know, he jogs 8 miles easy alongside me.

If you were to swap roles with Rafa for a day, how do you think he'd cope being you and what would you most love about being him?

(Laughs) If he were me he'd sleep all day and he loves our best so I think he'd take advantage and sleep in bed all day. Every now and again I'll leave the door open if I'm going out so he can lie on the bed and he loves it.

If I were him I'd take advantage of being able to go swimming. I'm always jealous that dogs can just jump in whereas we need to get ready first, they just dive straight in.

For this question, we ask our celebs to match up the following people’s personality to a breed of dog, for example, Winston Churchill = Bulldog or J.Lo = Afghan Hound, Frank Bruno = Boxer etc. If the follow celebrities were breeds of dogs, based on their personalities alone, what type of breed do you think they'd be...

Usain Bolt – He'd have to be a Greyhound because he's awesomely quick!

Jayne Torvill – Oh wow, that's a good one! She'd have to be a Shih Tzu because she's really cute and small.

Sharron Davies – Well she'd have to be a breed that's a good swimmer, so maybe a black Labrador.

Gareth Bale (Gail is a huge Tottenham Hotspur supporter) – Maybe something Welsh and cute? I just can't help but picture a Dalmatian! I love Gareth.

Describe the last time you laughed outloud because of something you saw Rafa, or another dog do.

(Laughs) When my friend and her dog came over last time, it was so funny Rafa is, and I say this with lots of love, not the sharpest tool in the box and my friends dog is a bit cleverer than him.

Anyway they were playing around and Rafa was getting ready to pounce so he sort of took this leap at my friends dog. Well, the other dog took just one step to the side and Rafa went straight into the side of the sofa. It was a real comedy moment, it was so funny – sort of like WWE puppy wrestling!

If you had the choice to arrange a party, a night in or night out, taking three people (choosing from any era, past or present), who would you choose?

I'd choose people who could tell stories. I think I'd invite Mick Jagger, for his rock 'n' roll stories, Dame Judi Dench because I think she's a real class act and Michael McIntyre so he could entertain us with his jokes.

I think that no matter what has happened to you that day, your dog has no idea and they love you so much regardless. The welcome home you get is just amazing and I think the happiness they bring always puts a smile on your face.

Finish the following sentence, my dog is... a little bit stupid, but I couldn't have asked for a better dog.

And finally, this is always a tough question and often requires a fair degree of thinking time but….If Rafa had the ability to speak and answer one question and one question only, what would you ask him and what do you think that he would say?

I'd like to ask him if he's okay with my little boy grabbing, wrestling and playing with him, and I think he'd say yes, but just not when I'm asleep or have just woken up.