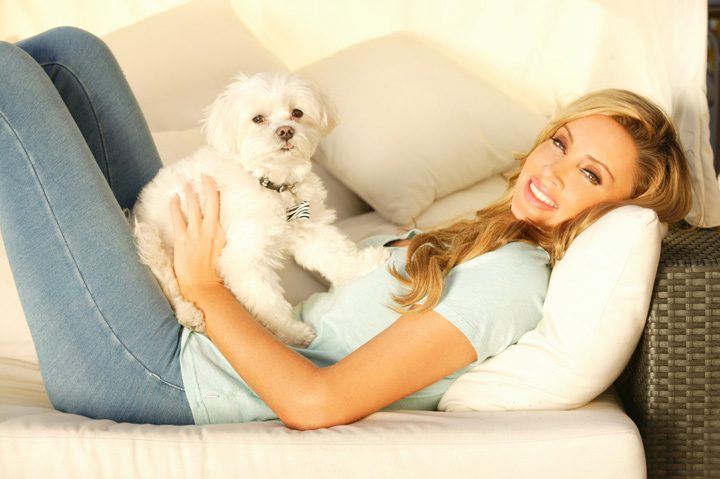 Kaki West is an accomplished fashion model, actress and red carpet host who lives in New York with her husband, two children and best friend, Roki. With her fourth FHM covershoot approaching, K9 Magazine jumped at the chance to make Roki a cover star in his own right.

Kim O'Meara caught up with Kaki to find out about her amazing career in modelling, her plans to become a fashion designer and all about Roki.

I have a 4 year old Maltese boy called Roki. We got him when he was about 4 months old and he's quite the character! He's a real mama's boy, he comes with me pretty much everywhere – lunch with the girls, photoshoots, shopping – wherever possible!

He's just so playful and a bundle of fun! I have two daughters and he adores them. Whenever he hears them come in he'll run down the stairs to see them. He loves to jump up and say hi to my husband whenever he comes home. I think he knows he's the baby of the family.

I couldn't imagine life without him. When we decided to get a dog I had to think about possible breeds, I have allergies so I had to try and find a hypoallergenic dog breed. Maltese don't shed and I kept mentioning it to my friend and one day she came and brought me a present and it was the best present possible – it was Roki!

When did your interest in pets/animals begin and how long how long have you been a pet owner?

We were definitely a dog family, we had two golden Labradors growing up as well as rabbits and goldfish. I always loved growing up around dogs, it was such fun.

We really were so pet orientated as a family, it's part of what's led me to becoming so involved in animal advocacy campaigns such as the campaign to ban horse drawn carriages in New York. The roads in the big apple are no place for horses.

You've appeared in some great TV shows such as Entourage. You've hosted red carpet awards and appeared on countless magazine covers. Which do you prefer - acting, hosting or modelling?

I really like a mixture of everything. I got started in modelling at 14 years old, in fact I fly to LA tomorrow to shoot my 4th cover for FHM! I think I'm part of a fairly elite club and have been really lucky to work with them so long.

That said, I think being in the modelling industry for so long is quite an achievement in itself so out of everything I probably am most proud of that part of my career.

I think it's taught me so much but also given me big plans for the future. I'd love to wear a new hat to design a fashion collection of resort wear. Not just swimwear, but clothing like kaftans, cover ups – things you can wear around the pool.

I'm the youngest of four in our family and my sisters are always saying they'd love something sexy to wear as women, not just mums around the pool chasing their kids around.

I think being a model has given me the chance to play dress up as a job, it's been great fun and a lot of inspirtation!

Your father, Bing West, is the former Assistant Secretary of Defense in the Reagan administration. Do you feel the surname helped to open doors or do you feel it gives you something to prove?

I think I always had the ethos to work hard. My dad taught me that and had strong principles about academics.  I think being the youngest in the family they thought I should be on something like CNN rather than magazine covers.

You know, I was this 14 year old girl who'd become a fashion model after my mum took me to New York and I was signed by Ford Models.

I had to be both pretty and smart. One thing didn't outweigh the benefit of having the other. I think my family understood though although it took a little getting used to!

Photography by Brian B. Hayes

Do you have a motto that you live your life by? What would you say Roki's motto might be?

I think mine would be a quote by Thomas Eddison, genius is 99% perspiration, 1% inspiration'. I always think you have to work hard, persevere and work towards your goals. You can't underestimate what hard work can do.

(Laughs) I think Roki's motto would be 'go big or go home'. He's a little dog who thinks he's bigger than he is!

If you were to swap roles with Roki for a day, how do you think he'd cope being you and what would you most love about being him?

(Laughs) Oh wow! I think I'd love the tummy rubs and massages as well as being carried around in a Hermes Birkin bag.

I think he'd love having a bubble bath with candles. He always barks when I have a bath so I think he's telling me he'd love one.

Jeremy Piven – (Laughs) I think he'd have to be a Poodle. He loves prancing around – a lot!

Kendra Wilkinson – She's have to be a little Chihuahua. Yappy, bouncy and very bubbly.

Big dogs or little dogs – I love both! I grew up with 90lb Labradors and Roki's a 5lb Maltese so both have a place in my heart.

Pedigree dogs or cross-breed – To me, it's more about personality. Roki's a pedigree, but my friend has the most adorable Pitbull mix who's just the sweetest dog!

Days off or days at work  – Days off definitely! A day to relax or have a good shopping day, or a vacation!

Describe the last time you laughed outloud because of something you saw Roki or another dog do.

(Laughs) Oh it's something he does daily. He gets on his bed and starts digging the bed with his two front paws to try and get the perfect spot before he turns around and lays down. It's become a ritual!

Oh great question! Firstly I'd have to invite Marilyn Monroe, she's an iconic blonde movie star. I recently saw 'My Week with Marilyn' and I think she was far more complex and intelligent than she was given credit for.

Secondly I'd invite Angelina Jolie, I think she's fascinating. Very sexy of course, a huge philanthropist and such an unusual creature. I've no idea what would come out of her mouth but I think she'd be a great guest.

And finally I'd have to invite Julius Caesar to bring a bit of manliness to the party, he was such a macho man.

TV show –I love Modern Family, it's so funny. I crack up whenever I watch it. My guilty pleasure is Real Housewives on Bravo.

Book – I just read this amazing book called The Ten Golden Rules: Ancient Wisdom from the Greek Philosophers on Living the Good Life.

Film – I recently watched Hugo and I really enjoyed it. It's such a magical film.

It has to be the unconditional love and friendship. I really think everyday my heart grows bigger for Roki, he'll do something that surprises me or makes me smile. He really is a mama's boy.

Finish the following sentence, my dog is... the apple of my eye.

And finally, this is always a tough question and often requires a fair degree of thinking time but….If Roki had the ability to speak and answer one question and one question only, what would you ask him and what do you think that she would say?

(Laughs) Oh wow, I know without thinking what I'd ask him. I'd love to know what his favourite food is.

I caught him licking some ice cream off the floor recently so I think he might say ice cream or maybe chicken!

Why is my dog humping absolutely everything, everyone, every other dog, every soft toy? Dog humping is both hilarious and embarrassing. Let's find out...

Losing a dog is a devastating event. Ask anyone who's been through the horror of not knowing where their beloved pet is and they'll...

Inside this edition of K9 Magazine.... Dog Body Language: Why Do Dogs Mount? Interview With Kaki West How To Choose a Dog Trainer K9...