Losing a dog is a devastating event. Ask anyone who's been through the horror of not knowing where their beloved pet is and they'll recite you a tale of sheer hell, suffering and misery.

Sadly, dog theft is on the rise in both the UK and USA. It's a growing crime with a growing band of opportunist criminals seeking to exploit dog owners. 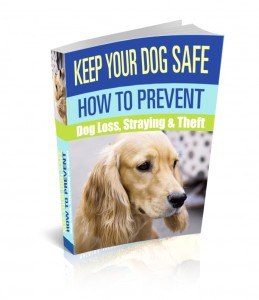 In this eBook, we take a look at what dog owners can do to prevent dog loss through theft or straying. We cover the laws, the rising trends and even include a bonus chapter on what to do should your dog go missing in a foreign country.

CLICK HERE To Read an Extract
“The value of pets in people’s lives has been on the rise for a long time and now we are seeing thieves trying to capitalize on this. Whether they seek to resell the dog, collect a ransom or breed the dogs and sell their offspring, thieves seem to be attuned to the increased financial and emotional value pets have in our lives,” said AKC spokesperson Lisa Peterson. “Losing a treasured family pet is devastating to the owner.”

Criminals look for weaknesses and exploit them. They know pets can’t protect themselves, so that means owners need to be alert,” said Lt. John Kerwick, a law enforcement K-9 handler and the President of the U.S. Police Canine Association, Region 7. “Be wary of anyone who approaches you and asks too many questions about your dog or where you live. This is a red flag that they may be out to snatch your pet.”

Peterson added that “These ‘dog-nappers’ are misguided and naïve. They’re stealing living beings, not jewelry that can be pawned. Plus, it’s unlikely that they can sell the dogs for high prices without proper registration papers, and these inept criminals are not realistically going to collect a ransom. Caring for a dog — and especially breeding — is a time consuming endeavor that requires a lot of knowledge. Thieves will find themselves with a frightened and confused animal that needs a lot of care.”

Research from Direct Line Pet Insurance has shown that almost one in 20 dog owners who have lost their pet (four per cent) believe it was stolen.

More than a third (39 per cent) say they are worried that their dog will be snatched.

Awareness of this pet crime is at an all time high, particularly following the recent suspected theft of Liz Hurley’s puppy, Emily, and Engelbert Humperdink’s German Shepherd, Charnie.

As a result, just under half (48 per cent) of those surveyed have fitted their dog with a microchip to make sure they can keep track of their movements. Others are taking more traditional precautions, with a quarter of owners (22 per cent) admitting they never let their dog off the lead for fear of them being snatched and 13 per cent never venturing out with their pets after dark.

If their dog was taken though it would seem that money is no object when it comes to its safe return. Dog owners are prepared to offer an average reward of over £450 to get their stolen dog back. Londoners would offer the most and are willing to pay a massive £714 for their dog’s return, with people from Wales prepared to pay the least, at just £203.

Some owners would go to extreme lengths to retrieve their pet. Ninety five per cent would take the matter to the police and close to one in 20 (four per cent) say they would hire a private detective to hunt for their favourite pet.

The lengths dog owners would go to reflect the bond they have with their four-legged friends. More than two thirds (68 per cent) said they would be devastated if they didn’t have their pet, with 61 per cent comparing the loss to losing a friend. A quarter (28 per cent) revealed they could not imagine life without their pet.

‘‘There have been a few cases of dognapping reported recently and this type of crime appears to be on the increase. We would strongly advise all dog owners to have their pets microchipped – obviously this won’t prevent them being stolen but it will help owners track them down. In the event of a suspected theft they should contact the police immediately and alert their insurance company. They may be eligible for money to help them track down their pets and to go towards a reward incentive.”

The insurance industry has first hand knowledge of how fast this crime is spreading throughout the country. Direct Line Insurance are one of many cover providers to tailor their services to help fight dog theft. “At Direct Line, we recognise how distressing it can be to lose your pet and that’s why our policy offers up to £500 towards advertising and reward to help get it back. We will also pay the purchase price if your pet is stolen or goes missing and has not been found within 45 days.”

Roxi, a Staffordshire Bull Terrier puppy, was hand-reared by the Sampson family from five-weeks-old, but at just twelve weeks she was stolen from her home by thieves masquerading as door-to-door salesmen. They came to the front door selling tea towels as a distraction before making off with the puppy from the back garden, in clear view of on looking neighbours.

“We were all absolutely devastated when Roxi was stolen,” said Nicky Sampson. “We couldn’t eat or sleep the whole time she was gone and the family business suffered. I hope no other owner has to go through what we did.”

This report is free for K9 Magazine Premier members. If you can't see the download link below you need to log in as a member.

Download Keep Your Dog Safe: How to Prevent Dog Loss Through Theft or Straying