David Watkins lives in Italy and is a dog lover. But his journey from non-dog lover, via dog apathy to full on dog owner has been an interesting and telling one. This is the second in a series of pieces by David, each instalment provides an insight into how dogs have affected his life. From being forced against his wishes to interact with dogs, to dealing with their mess, fearing them and maybe even hating being around them - David probably had the understanding of even the most ardent dog lover when he initially claimed not to like dogs. This isn't about proving that people who don't like dogs are wrong, it's about one guy and how dogs have affected his life.

We've had the Airedale, the blue tongued Chow, the large German Shepherds that enjoyed "messing" up the Saturday afternoon football and of course the nice friendly guard dogs. The list of no-nos was long enough but then came the Poodle. 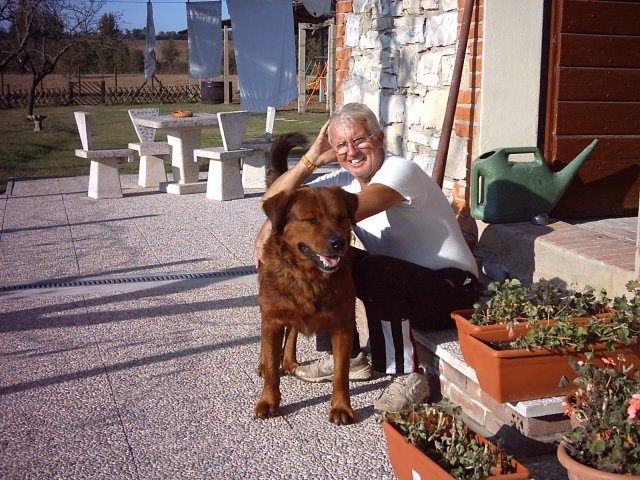 I was now working for a TV company as a sales rep and the main part of the job was to install TVs and videos in the customers' homes. This obviously meant meeting their lovely pets, dogs, cats and even snakes, spiders and parrots. There's some strange people out there!!

So now we have the Poodle, (none of these breeds were endearing themselves to me). The large house was mock Georgian, beautifully decorated, immaculate gardens and my first call on a bright summers' morning. This is in Essex by the way. I always tried to dress casually but smart and on this particular morning it was a denim shirt, linen style fawn coloured trousers and brown polished shoes. The lady of the house answered the door and allowed me entry into the lounge where the TV needed to be changed for a newer model.

I proceeded to place my bookwork on a nearby table when I felt a warm moist sensation on the back of my leg. No, this is not "The confessions of a TV man" - sadly. On turning round the lady said, "Oh, he's only pleased to see you". The bloody dog had taken a leak up my trouser leg! Charming. How was I to express how pleased I was to see him? Here I was, on my first of many calls that day with a large wet stain down the back of my leg and possibly as the day wore on in the summer heat, a good target for any other canine that fancied a splash up a walking lamppost. I was not amused. These animals seemed hell bent on distancing themselves from me forever.

Whose turn would it be next to get up my nose, or up my leg? The Salukis. Twenty-six of them!! The call was to a customer who complained that their video was playing up and could I change it for another - this was a rental company by the way. So having the address I proceeded to find the place. The paperwork given to me stated that the occupants were teachers but no mention of dogs. It was off the beaten track and after some time searching I finally arrived at what looked like an absolute tip of a place; a large, well-fenced field, and sitting in the middle a somewhat dilapidated trailer home. "Teachers?" I thought, "Teachers of what?" There were numerous outbuildings on the property, all in a state of neglect.

The gate in the fence had a warning sign, 'DO NOT ENTER, RING THE BELL' Then I suddenly saw why. From around the various buildings came this mass of flying fur and legs. About fifteen or so charged the rather flimsy fence, growling and baring their teeth. Luckily that day I was wearing dark trousers. The noise attracted the owners who now appeared from the trailer home. One thing I was certain of - they weren't teaching fashion. The man approached and asked me to wait whilst he put some of the dogs away. Some? How many? Well it turned out that six were friendly, or so he said!

I'd now been there for about half an hour but eventually I was shown into the trailer (Tip). And so were the six Salukis. Now these are not small dogs and trailer homes are not renowned for their space. I could not believe the scene. It was like a barber's shop that hadn't been swept for years. There was hair in and on everything, there was even hair in the air. The dogs had free reign, sitting and climbing on what was once furniture but now resembled God knows what. Where's the video I thought. So I asked the question. “Oh here" was the reply. By now I had a furry tongue and tonsils.

The woman pointed to a shelf in the corner. I thought she was pointing to a cat. It was covered in fur. No wonder the thing was playing up. They'd choked it to death. This was murder of company property. No way was I going to leave another machine there to be another victim of 'death by fur'. Over the years one had learned to make excuses about the equipment, and use as a ruse to leave the property with the TVs or videos, return to the van and say you'd be back later. I needed to be out and away from Hairy Cottage, fast. I made my excuses, got the video back into my van and returned to the office with the story. I was covered in long fair hairs and my workmates said they were women’s. You’re right,” I said; “Mrs. Saluki the hairy Greek”.

The dogs have taken a bad press in the last chapters so maybe I should pick on the owners to even things up. Of course they come in many shapes and forms as do their pets and there are undoubtedly many good responsible people. it's like always, the minority that give the dog a bad name.

Back in the eighties I lived in a small bungalow with open planned gardens, you know the type. No fences, neat lawns, all postage stamp size and everybody seemed to take great pride in their upkeep, including myself. It could have only been about seven by seven metres, two small flowerbeds and six young shrubs. I took great pride in the grass; you see I had no dog. One morning as I was leaving for work I noticed the 'pile'. Fresh looking and on my pristine grass. Incensed, angry and vowing death to the dog I scooped up the foul heap and placed it in the kerb. The nerve of the animal!. Was it alone or on a lead?

Yes, you've guessed it. Next morning, same pile, same time, same pigging animal. So I devised a plan, As Baldrick would say, “A cunning plan”. Instead of clearing up the mess I decided to leave it in situ and be ready the next morning. Sure enough, at about a quarter to six, down the road comes 'Mr. Dog Walker' not just taking his beast for a walk but also for an evacuation of his bowels. In my front garden. Hiding behind the curtain I observed his approach, the animal cocked its leg a couple of times and then loitered adjacent to my small driveway. The man was looking all around, possibly thinking “Too early for anyone to be about.” He noticed yesterday’s delivery, still sitting proud on the close cropped grass but by now going a bit crusty with the summer sun. The dog remembered. Here's the place, no long weeds or vegetation to get in the way. Man gives dog more lead to stretch, dog squats, I watch silently, almost getting a kick out of the situation. My plan was taking shape.

The scenario continued for the next five days and then I struck. Over those five days I'd collected the piles, doing my best not to disturb their exquisite composition. These I placed on a square of plywood, nicely cut, about the size of a tea tray, arranging the offensive objects, as would a celebrity chef. In the largest mound I placed a Union Jack. Next to the ply I had an equally neat sign, stuck into the lawn and in bold letters "Thank you for this week’s donations, now piss off" This was all done under cover of darkness. Next morning couldn't come quick enough. But what if he didn't appear? But he did. Believe me it was worth the effort. The man's face was a picture. He must have heard me laughing inside the house as he scuttled away with his little poo maker. I never saw him again.

And then back to my days as a rep for TV's, and to another fairly remote bungalow, funnily enough in the same area as the Salukis. The sign on the gate said nothing - there wasn't one. The path leading to the front door was about fifty or so yards, a steep slope so a bit of a heave to carry one television, a TV stand and the paperwork necessary for the contract. I decided to take the TV stand, comprising two metal ends and a wooden centrepiece, plus the paperwork, intending to return for the TV. There was no sound or movement ahead of me or anywhere in the garden. Pushing open the gate I proceeded to walk the few yards towards the front of the building, TV stand in one hand, paperwork tucked under my arm. From nowhere and without warning two bundles of yapping snarling dogs charged towards me. One, a Jack Russell, the other, larger and looking like a cross between something and a Border Collie. And he looked like he meant business. The terrier remained in front of me, growling and showing its teeth whilst the larger dog circled me menacingly. The TV stand now seemed to transform itself into something resembling a pickaxe handle. I'm thinking, "Get too close doggie and you'll be wearing this for the rest of your life. "

Whose well-being was saved I'm not sure but this toffee-nosed voice drifted across from the higher ground. "It’s OK, they won't bite you young man". Young man indeed. "Well good for them because if they even try I'll knock their heads off."

"That attitude's not called for. " She sounded more like Mrs Bouquet with every breath. "Madam" I said, "Shouldn't you have some sign on the gate, I'm thinking of the dog's welfare."

She didn't like my sarcasm. Good, she wasn't meant to.

"I shall phone your manager, you're very rude"

"I was meant to be, good day!" I was off. This stupid woman waited another week before she was serviced again and that was on the understanding that a sign be put on her gate. You see, it's the owners!