Many people would think that someone who travels two thirds of the year shouldn’t own a dog, as them being away all the time wouldn’t be fair for the animal. But what if they took their pet with them?

Globally renowned opera Tenor Ian Storey does; he and his dog Boss travel everywhere together, which stops Ian from missing his wife and son so much when he’s on tour. Boss helps with the homesickness, though Ian prefers to think of it as “travelling with his best friend”.

But before you buy a doggie travel crate and fly off to see the world, be aware that there are certain pitfalls. Ian is keen to make more people aware of the problems he has encountered on his travels, so they know what taking a pet with them really entails. We were lucky enough to chat to Ian about life on the stage. 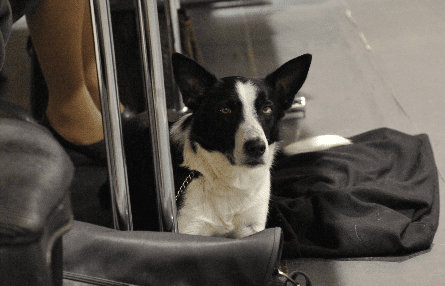 First off, please tell us a little about your dog?

Well, he’s a five year old smooth-haired Border Collie. He always looks to play with other dogs, and loves his Frisbee and a rugby ball as well. But he’s also a good guard dog, and very well behaved.

I suppose that’s important if you take him backstage with you?

Very! He has had a lot of training; for example I have taught him to lie down somewhere and stay there until released. He usually just has a nap once the music starts! He’s very patient.

And in the hotels?

He gets very excited when he thinks it’s time to head off to work, which is not so great on a day off! He’s pretty adaptable and gets into a new routine quickly. But he usually wakes me up pretty early with a cold wet nose in my ear – better than an alarm clock!

What do you and Boss get up to between performances?

It depends on where we are – but obviously walking and playing ball figure highly. In Barcelona and Bari he loved playing on the beach (certain ones allow dogs and of course I always clean up after him). I love going for walks in the forests when there are some nearby. He had his first experience of deer and a fox in Zurich – he got very excited and wanted to play, but of course they were gone very quickly. Now I am driving with him we can go out of the city easily to find new places. I usually have two 3 hour rehearsals a day, but the rest of our time is our own. The schedule is pretty flexible and times can vary wildly, but he adjusts.

Do you find that certain cities or countries are more welcoming of dogs than others? If so which places?

The UK is supposed to be a nation of dog-lovers, but I have to say that it is not true compared to some other EU countries. In Germany, Italy and Switzerland in particular I take him into the bars for breakfast, and restaurants for meals. Milan especially has separated parts of their parks for exercising dogs off the leash. He goes into theatres as well, with no problem.

You and Boss must have got up to some funny stories whilst on your travels. Care to share?

Just tonight in the theatre during a break he started growling and staring at the set – I took him on to see what was bothering him; we think it was a bouquet of flowers sitting upright on the bed, which he must have thought was a head without a body.

Usually though he stays in the dressing room during performances. In Zurich the wardrobe staff told me that he sits listening and looking at the intercom when I am onstage singing and lies down and sleeps when the others sing! Sometimes that means he doesn’t get much sleep – one night after we did Tristan we were in the bar until 3am, and at 2am he decided he was tired and had had enough. He climbed onto my lap and had a proper kip.

He also likes to watch the dancers. He’s fascinated by them. In one theatre I had to laugh - as usual the Stage Director was sitting quite close to the Conductor, and in between them sat Boss, being very attentive to the dancers on the stage!

Well, I suppose he is the boss! Is that how he got his name?

He was a rescue dog and had no name – for a few weeks he was known as just ‘Dog’, until one day, whilst getting ready to go out, I sprayed some Hugo Boss aftershave. He got all excited and ran around in circles, so I decided to call him ‘Hugo’. My wife said that was daft and called him ‘Boss’ instead, and he responded to it. So it stuck. But although he’s boss by name, he isn’t by nature really... well, sometimes he thinks he is!

So, what made you decide to take Boss travelling with you?

One interviewer recently asked why I travelled with my dog and not my wife - I jokingly said that he doesn’t want to buy handbags and shoes! Seriously though, Bridgette has her work but travels when possible. I guess I just like the company – he is my best friend after all.

Does he enjoy it?

I wouldn’t take him if he didn’t! He didn’t seem to have any worries about the plane – I was probably more concerned. He loves driving, even long trips. He seems very happy in the car. He also loves his pee-stops – lots of new and interesting smells!

Was the process of getting Boss a pet passport smooth running?

It was very smooth. The PETS scheme has made it much easier to travel with dogs than it was before, but there are still some problems.

What did you have to do and how long did it take?

He had to have a rabies inoculation and then the blood test for antibodies a month later. It was going to be over a year until he would travel with me the first time so there was no pressure, but other people should be aware of the time delay and make sure they allow for it. He also had to be microchipped, so they can identify him.

Have you experienced any problems travelling around Europe or in and out of the UK with Boss?

Yes! But only coming back to the UK, because the rules are slightly different here.

Flying out of UK was no problem – I just had to ensure we were on the same flight, which, more often than not, happened to be a Jettly plane. I flew out of Birmingham the first time and then went to six different cities in four countries with no trouble. It cost 60-70 euros to fly him, depending on the airline, though Swiss International wanted 300. But when we wanted to get back home there were problems. Usually I check him in myself, but coming into the UK you HAVE to use a shipping agent. This cost me around £772! And then I was told that his crate would not be accepted by Heathrow as they had different regulations – I had used it for all the other flights, including the outgoing, and if I had been flying to any other airport it wouldn’t have been a problem. But there are only four airports in the UK that you can bring your dog back into, so I had to buy a new crate, which cost £1500. When I arrived, I had to drive out to the Animal Reception Centre (who were actually really good with Boss), where I was told I had to pay £275 in customs clearance, £206 of which was government tax. It would have cost me even more on a weekend, because I would have had to pay an agent for his time. Overall, just coming home cost me over £2500!

The costs involved do seem very high. Why do you think that is?

Politics. I heard of one judge at an international competition who, when asked about relaxing the rules, was heard to reply: “We won’t allow it. We don’t want foreign muck to pollute our breeds.” Quite amusing, this kind of xenophobic dribble, but I think it is indicative of maybe a subversive influence. DEFRA etc talk about the health issues behind travelling pets, but I can’t help but feel that there is a lot of political pressure from various groups to make it difficult to fly with your pets and to put obstacles in your way. It is even less fair when you consider that to pop him in a car and drive him back myself would have cost just £30.

Were there any other considerations you had to make about travelling with him?

I also had to find a vet who would administer a tick and tapeworm treatment for him not less than 24 hours and not more than 48 hours before checking in, under the PETS scheme rules. If you miss this window you have to reorganise it, which can be a pain. Also I always check with a local vet if there are localised issues that may be damaging to him - heartworm in the South of Italy, for example.

Do you think that anything could be done to make things easier?

Shipping agents are the biggest part of the cost and shouldn’t be necessary. Nowhere else has this requirement, at least in my experience. If there is a sensible reason for it, then I think that there should be an exception made for UK dogs returning to the UK – they are registered and if the papers are in order what is the problem? I will be driving back into the UK for the first time soon, and am intrigued as to what the procedure will be. I know someone who travels abroad many times a year with his dogs and it seems fairly user-friendly. But not much of it is explained easily in advance – you sort of have to learn as you go, or do your research.

Finally, how do you think Boss would cope if you swapped roles for the day and he took centre stage? Would he make a good Opera singer?

Well he would certainly find every opportunity to get on the bed! When the music starts though he normally just lies down and goes to sleep – not really a useful attribute to have as a singer.