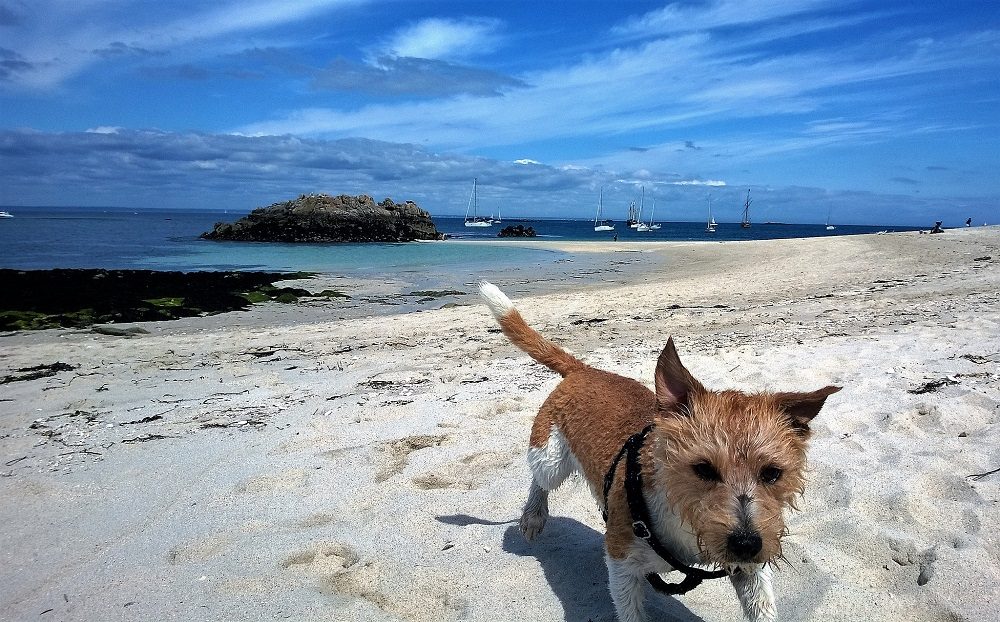 Travelling to France from the UK is pretty straightforward and being so close to the British shores, it’s easy to see the appeal it holds to dog owners looking to get away with their dogs in tow - especially now that more ferries travelling between the two countries welcome pets.

One of the most popular places to land in France is located in the north-west of the country. With a rugged coastline to explore and some of the world's oldest standing architecture to admire, Brittany has a lot to offer dog owners.

This month, Paul Wojnicki gives us four reasons to travel to dog friendly France, and specifically Brittany, with your dog and what to do while you’re there.

It’s hard to imagine a more beautiful beach anywhere in Europe as we lay on the pristine white sand watching my dog, Falco and the kids splashing around in the shallow blue waters. It genuinely feels as though the boat just dropped us off in Tahiti instead of a remote speck of sand off the French Atlantic coast.

Only when I dip my own toes in the crystal clear waters to retrieve a ball for Falco, perfecting his doggy paddle, am I reminded that we are only a couple of hundred miles further south than Brighton.

Reason no 1: The medieval buildings

The Glenan Islands of Brittany are possibly the highlight of our nine-day exploration of this beautiful corner of France, but it’s a close run thing between here and a few other hot spots.

Mont St Michel, for instance, is the second most visited attraction in France for good reason and it’s just a thirty-minute drive from our Canvas Holidays campsite in Brittany. I’ve written about the Mont before for K9 Magazine so I’ll not go into too much detail, except to say that it’s best described as a picture perfect pile of medieval buildings piled onto a rocky outcrop (that occasionally becomes an island) and topped with a Gothic 15th Century abbey. Let’s just say it’s amazing.

And best of all it’s just a twenty-minute drive from where we are staying.

Reason no 2: The dog friendly accommodation

Now the word campsite might mistakenly conjure up images of a muddy field full of tents to those of you who have never visited a French campsite.

It’s essentially a small town with enough activities to keep even the most active families happy. It’s also delightfully dog friendly and only a few moments’ walk from complete seclusion and nature. I was surprised to find the park teeming with rare red squirrels and rare bird life.

Domaine des Ormes is also within a short drive of numerous medieval towns and villages. For starters, there’s Mont, as I've already mentioned, but there’s also Dinan and nearby St Malo, a walled town with some of the most stunning beaches on the north coast of France.

We spent a full day at St Malo and the neighbouring town of Dinard, which has a dog friendly beach.

Unfortunately St Malo’s beach isn’t dog friendly but we did still cross the beach on a path to one of the outlying islands which can be walked to at low tide.

From here we enjoyed an amazing view of the walled old town as a band of fog passed over. It was a magical sight and Falco loved every minute of it. He even managed to sneak in a swim in the deserted sea baths on the way back.

Reason no 3: The dramatic coastlines

With so much to see and do on and off site it seemed a shame to move on from Domain Des Ormes but after a two hour - and delightfully toll free - drive we were very excited to find ourselves in Camping la Grande Métairie, which is smack bang in the middle of the largest collection of Neolithic stones in the world.

Think Stonehenge but with over 3,000 standing stones in continuous rows for around four kilometres. It’s the ultimate early morning or late evening dog walk, with the sun rising between the stones.

It’s also perfectly located for exploring more of Brittany’s gems, this time on the Atlantic coast. We started with a trip to the Quiberon peninsula which has a remote end of the earth feel similar to Lands’ End in the UK.

The savage northern coast is wild with large waves, dramatic cliffs and surf schools aplenty. There’s a huge dog friendly beach just under the fort as you cross the isthmus onto the peninsula. The sand is silvery and the water a deep blue but it was too rough to risk letting Falco swim here.

The southern coast, on the other hand, has sheltered coves and beaches, perfect for paddling in but doesn’t allow dogs on the sand. Still, we enjoyed wonderful walks along the rocky coastline and at the tip of the peninsula, we eventually found another dog friendly (or at least somewhere dogs were tolerated) fringe of sand in a sheltered bay with calm waters.

Reason no 4: The dog friendly beaches

The real highlight of the trip had to be the Glenan Islands that I began this tale with, which really do need to be seen to be believed.

The beach has no restriction on dogs and since only a limited amount of visitors can reach the island on any one day there is plenty of space for dogs to frolic in harmony with their two-legged counterparts.

Practicalities of travelling to Brittany with your dog

Canvas Holidays have more than a dozen camps in Brittany and offer a range of accommodations on all of them, from Maxi tents to luxury lodges.

We stayed in a two bedroom dog friendly “Relax Mobile Home” that slept six people and included a gas-powered barbecue and covered veranda. A four-night stay in the May half term holidays cost £273 at the time of booking while three night stays in June can be found for £108. Entrance to all pools was included while other activities were reasonably priced.

Brittany Ferries are legendary among dog owners thanks to their dog friendly cabins on the UK-Spain routes. Dog friendly cabins are also available on the Portsmouth-Le Havre route. All other crossings allow dogs onboard, some services run overnight (Portsmouth-St Malo for example) while others take just 3 hours (Portsmouth-Cherbourg).

We travelled outbound from Portsmouth to Cherbourg with Falco staying in the car. We returned from Roscoff to Plymouth, taking just over five hours and again with Falco waiting in the car. It’s an early morning sailing so temperature isn’t an issue and you’re allowed to visit your dog (by appointment) during the crossing. This ferry also has onboard kennels and feels similar to a cruise ship with onboard cabins, with a swimming pool and an excellent restaurant.

The Glenan Islands can be reached from Benodet with vedettes-odet.com from 36 Euros. In July and August the company also run a glass bottom boat around the islands.

Soprano Joanna Forest: ‘My Dog Deserves Her Own Video Game’

Joanna Forest is a classical soprano whose debut album 'Stars Are Rising' went straight to number 1 in the Official Classical Album Charts. What...

For most people having a dog changes their life. But this is a story that’s extra special because of an extra special dog. Sarah...

In This Issue... Science: How Dogs Can Read Your Mind Just by Looking at You Real Life: I Rescued a Puppy Farm Dog &...

According to new research, over half of all British dog owners are planning a trip with their pet. Here are 10 places within the...