Cataracts in Dogs: What You Need to Know: Owners of older dogs often notice begin to notice a bluish white film start to develop over the eyes of their dog. As dogs age, eye problems - particularly cataracts - are more common. The condition is a thickening of the lenses, which is a function of age. It can become present in dogs of any age but normally happens as the dog enters their senior years and it tends to progress slowly.

True cataracts are a total thickening of the lenses, so that light cannot come through the pupil and sight is lost. Certain injuries and infections can cause cataracts, and the condition is sometimes a sign of diabetes.

There is a disease, juvenile cataracts, in which cataracts appear at a very young age (as early as 1 year old), first in one eye and then in the other.

This is an inherited disease, seen more commonly in Irish Setters, Afghans and Old English Sheepdogs. The only way to prevent blindness is to surgically remove the lenses. Dogs are nearsighted anyway – they can't adapt their vision to distances – so the removal of the lens is something they can live with quite comfortably without much noticeable difference in eyesight.

Some cataracts are genetic and it is a problem that is more common in certain breeds. The lens is a refractive structure within the eye. In a healthy condition, it is optically clear. It continuously grows through life, but it does so in such a way that the center becomes more compact. A normal change with age, then, is a condition called “lenticular sclerosis”.

The condition of lenticular sclerosis should not be confused with an actual cataract. It is a senile alteration of lens fibers resulting in an absorption of some of the wave lengths in the visible spectrum. The dog's vision is not changed significantly.

In contradistinction to lenticular sclerosis, a cataract is an apparent opacity within the lens that will not allow the passage of light. Many false concepts have occurred due to nomenclature. Cataracts can be classified according to types. In general, most authorities agree on the following chronological classifications:

The cause of canine cataracts – whether hereditary or acquired – may be influenced by many factors including the effects of inflammations, toxins, metabolic defects, trauma, radiation, and many more.

It becomes obvious that the term juvenile cataracts only means that a young dog has cataracts and the condition could be either acquired or hereditary. Much work is necessary to elucidate the potential hereditary mechanism which may be present. Medical therapy is of no avail and surgery is necessary if restoration of vision is to be accomplished.

The videos in this article explain more about this all too common problem which tends to affect older dogs as well as the treatment, via surgery, of a canine cataract.

Many eye diseases in dogs can be successfully cured surgically if non-surgical treatments do not help. In the condition in which the tear glands and ducks are not producing tears, for example, a medication is put into the dog's food in the form of drops.

If there is any function at all left, the medication will stimulate the glands to again produce tears normally. If the medication does not work, an unusual and creative operation is sometimes performed, whereby a duct of one of the dog's salivary glands is moved so that it empties out of the eye instead of the mouth.

The saliva moistens and protects the eye just as the tears are supposed to. Logically enough, Pavlov's theory works with slight alteration – a dog who has had such an operation cries when his appetite is stimulated!

If an ulcer has resulted from the dryness and inflammation of the eyes, or from some other irritation or trauma, medication is again tried initially. Especially if the ulcer is a superficial one, antibiotics usually heal it.

If the ulcer is a deep one or has punctured through the cornea into the eye itself, another innovative type of surgery is performed. The ulcer is covered with a truly organic “bandage” - the dog's own third eyelid, or a flap from the white part of his eye. The bandage is left on for several weeks while antibiotics are used to heal the ulcer. It can then be removed with a snip or two of the stitches holding the bandage in place.

To understand the various reasons why your dog may come down with a serious eye problem, you need know some important information on the genetic make-up of these animals.

For example, the normal dog has eyelashes on the upper lid only. They are in three to four rows, so close together that they appear as one single row. They are directed away from the cornea.

In abnormal conditions, several eyelashes may be misplaced. These hairs are located so that they are directed toward the very sensitive cornea. The initial irritant may not be associated with these hairs, but will act as the exciting mechanism of a vicious circle.

The irritant causes the animal discomfort and produces blinking. The blinking produces increased pressure by the lids on the cornea, leading to further irritation induced by the aberrant eyelashes.

This irritation further aggravates the blinking and spasms of the muscles occur, thus completing the cycle. The end result is severe corneal irritation which requires veterinarian attention.

The Goal Of Veterinarian Treatment

The object of treatment is to interrupt this vicious circle by determining and removing the initial irritant if still present. The defect that is present is treated also.

The usual method used to eliminate the aberrant hairs is “electrolysis,” in which the hairs are destroyed by electronically produced heat. Our preference is to remove surgically the entire row of abnormal hairs.

Professional help is strongly recommended to treat this problem. The use of home remedies and pet store drugs may be the most devastating mistake the dog owner can make. All medications used for eye diseases should be discarded when therapy has been completed.

Many medications that are used routinely are extremely toxic when ingested, and therefore the well-being of our children and pets should be a prime concern.

A condition of great concern to fanciers of the Poodle, Maltese, Shih Tzu, and other small, light colored dogs is “epiphora”, or excess tearing. It is a problem primarily in the lighter colored dogs. However, we see it also in dark colored dogs, but it's simply not as noticeable.

Many things may be responsible for this very distressing problem. Among them are:

1) Misplaced eyelashes (as discussed above).

2) The tear duct which drains the tears from the eye may be abnormally positioned.

3) A small island of hair which may grow from the corner of the eye next to the nose, may act as a wick and tears will then overflow.

4) There may be overproduction of tears without apparent irritation.

5) There may be an abnormal position of the inner corner of the eyelids next to the nose referred to as “medical entropion”.

6) There is recent evidence of a potential metabolic defect associated with porphyrin metabolism.

When one reviews all of the possible causes, it becomes apparent that there is no single treatment that can cure this condition.

Some authorities recommend low levels of oxytetracyclines in the food daily, and others recommend surgical removal of the gland in the third eyelid. However, it is the opinion of many veterinarians that thorough evaluation of the entire condition is necessary in order to arrive at a definitive diagnosis and a specific treatment.

In summary, there is no therapeutic panacea for abnormal tearing and much more research is necessary to elucidate all the mechanisms predisposing to it, as well as treatments that will prove effective in the majority of cases.

Collie eye is also a problem of genetic predisposition. The genetic mode of inheritance has been determined. It is a simple recessive autosomal gene. The syndrome has been “graded” unfortunately, and this is one of the worst mistakes that can be made in eliminating such a disease.

We presently diagnose dogs as affected or unaffected regardless of the variation of eye lesions present. We have demonstrated that all the lesions are related to one another and that the presence of any lesions incriminates genotypes. Because of the recessive gene, a mating of dogs with normal eyes may certainly produce affective offspring.

Progressive retinal atrophy is a disease which is manifested in dogs usually four years old or older. It has been reported in dogs as young as seven months. It is seen in English Setters, Springer Spaniels, Labrador Retrievers, Poodles, Elkhounds, Cocker Spaniels, Beagles, and others. It is transmitted as a simple recessive autosomal gene.

The first clinical sign which may be observed is a widely dilated pupil which becomes unresponsive to any light. The dog will soon show signs of decreased vision during twilight. The dog's vision progressively decreases until he is completely blind. Nothing is effective in the prevention of inevitable blindness, but there is some evidence that vitamin A therapy may delay the end stage blindness; however, this is controversial. 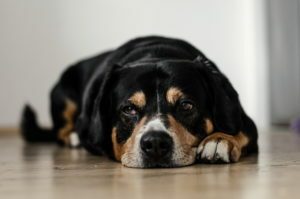 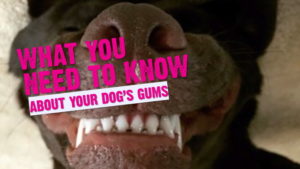 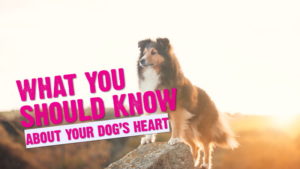