Six years ago a project was commissioned by Alzheimer Scotland with the Glasgow School of Art student service. Whether the students involved at the time knew it or not, their work on behalf of the Dementia Dog Project would go on to become life-changing.

The original concept was to provide people in the early stages of dementia living at home with a fully trained assistance dog. This dog would be a companion, helper, social connector and reminder for key daily tasks, as well as sharing all of the love and joy we know dogs do just by being by our sides.

What makes this pilot project even more special is the collaborative work they do with the community. 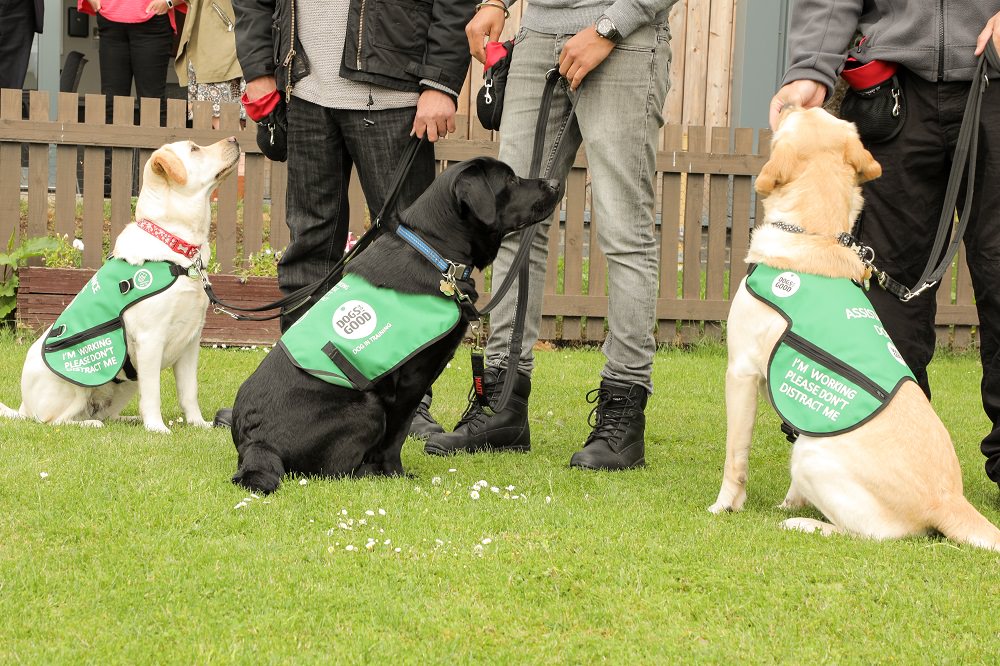 Alongside canine organisations Dogs for Good and Paws for Progress CIC, the Dementia Dog Project also made history when it teamed up with the Scottish Prison Service to launch the country's first ever scheme which sees men in custody at the open prison, HMP Castle Huntly, get involved in the dogs training to get them ready to assist people living with dementia.

We recently caught up with Fiona Corner, Project Manager of the Dementia Dog Project to explain more and she also introduced us to one of the first beneficiaries of the project, Malcolm Thomson and his wife and full-time carer, Imke to hear more about how their new companion, Webb, has integrated into their home now his assistance dog training is complete.

Webb is a 2 ½ year old black Labrador. He has been building up to the day he could become an assistance dog from a puppy when he underwent socialisation.

From there, he moved to the Dogs for Good national base in Banbury for early assistance dog training. Fiona tells us that for dogs like Webb the first year of training is focused on basic commands and socialisation puppy skills "so they are calm and well-adjusted in different environments". 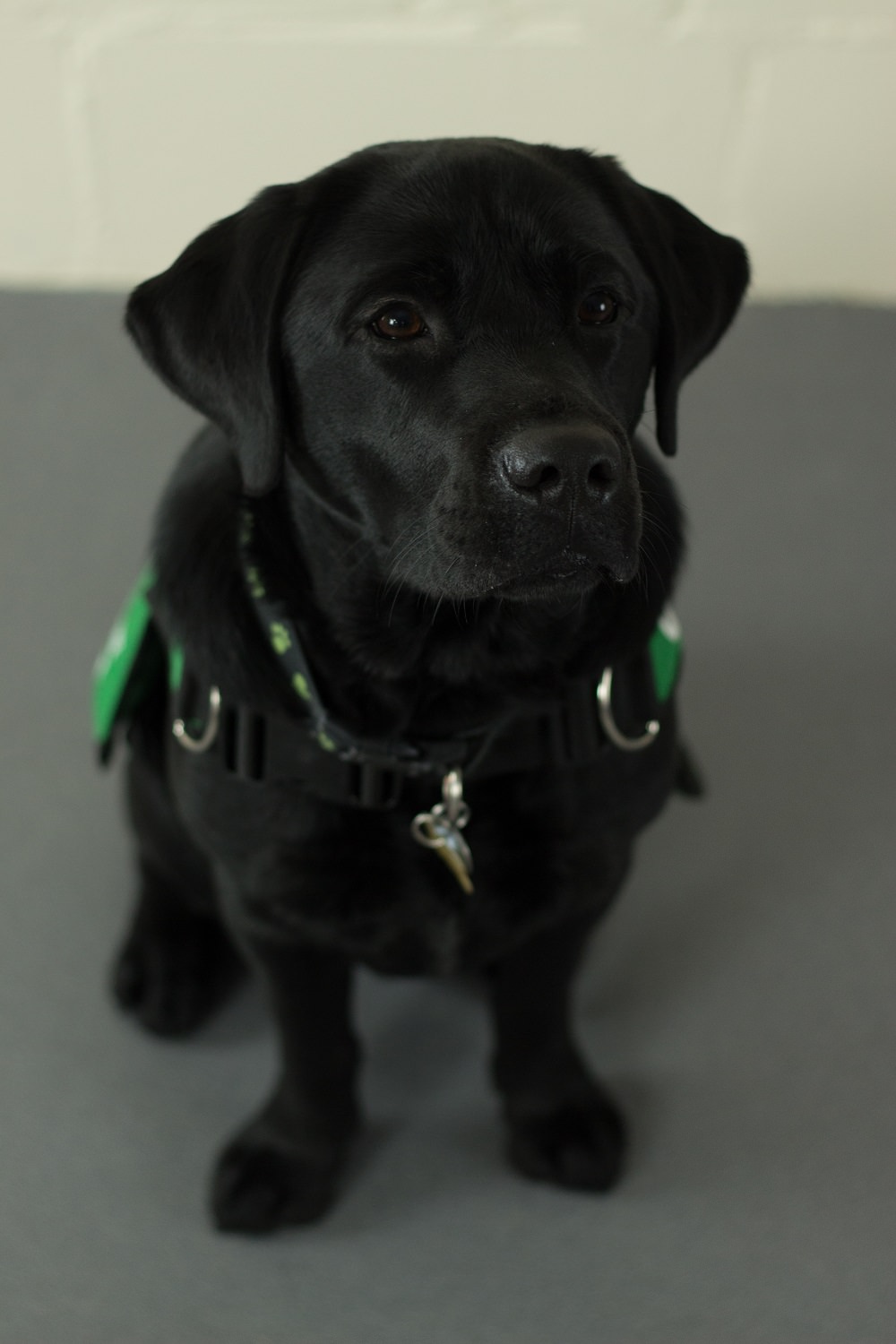 In year two, dogs are identified for their ‘career path’ ahead based on their skill set and personality, such as suitable for someone living with dementia, or a child with autism, or someone in a wheelchair. For this, when Webb was ready for the final, more advanced stages of his training, he landed in Scotland with the Dementia Dog team at HMP Castle Huntly, near Dundee.

The final stages of his training took several months and during that time he learnt more advanced skills suitable for helping someone who is living with dementia. 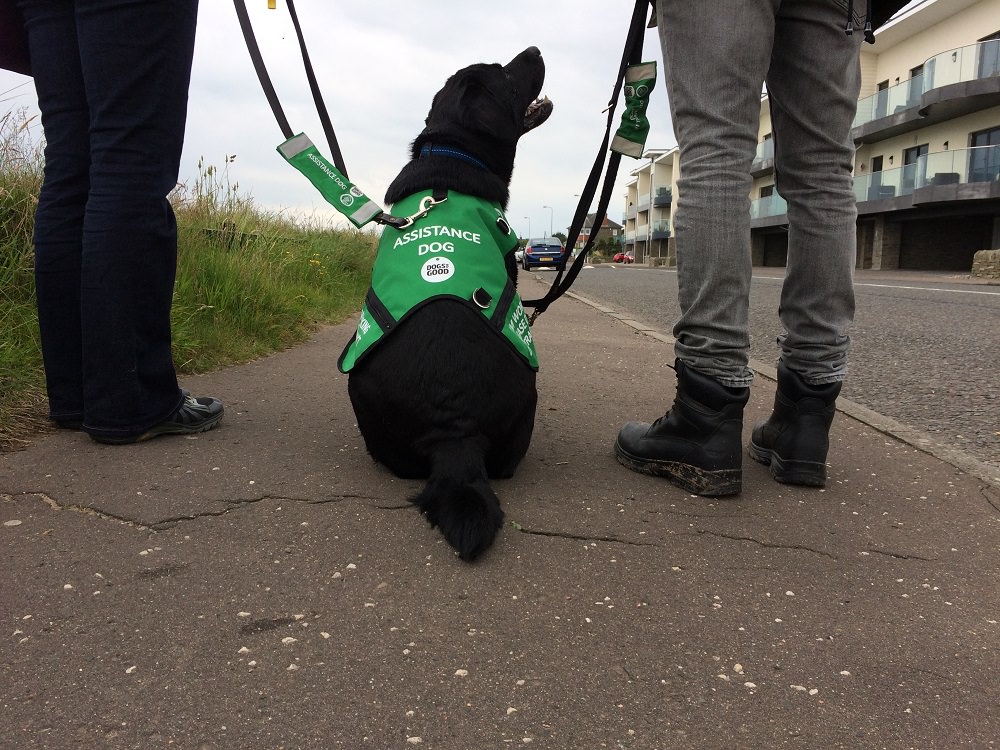 Webb, alongside two other dogs who have also just completed the program, worked with a Dementia Dog Instructor on a daily basis who was assisted by students under custodial care at the open prison, learning all about dog care and welfare, to more the more technical skills required to train the dogs complex skills – such as how to respond to an alarm to fetch someone their medication kit.

This is a skill that Webb now puts to use several times a day to help remind Malcolm when it’s time to take his medication.

'Webb makes Malcolm smile, a glimpse of his old self'

Students at the open prison also helped teach Webb how to walk on a dual lead, which now allows Malcolm and his wife, Imke to enjoy walks together, steadying Malcolm’s pace and acting as a social connector and bridge to open up conversations in the local community. 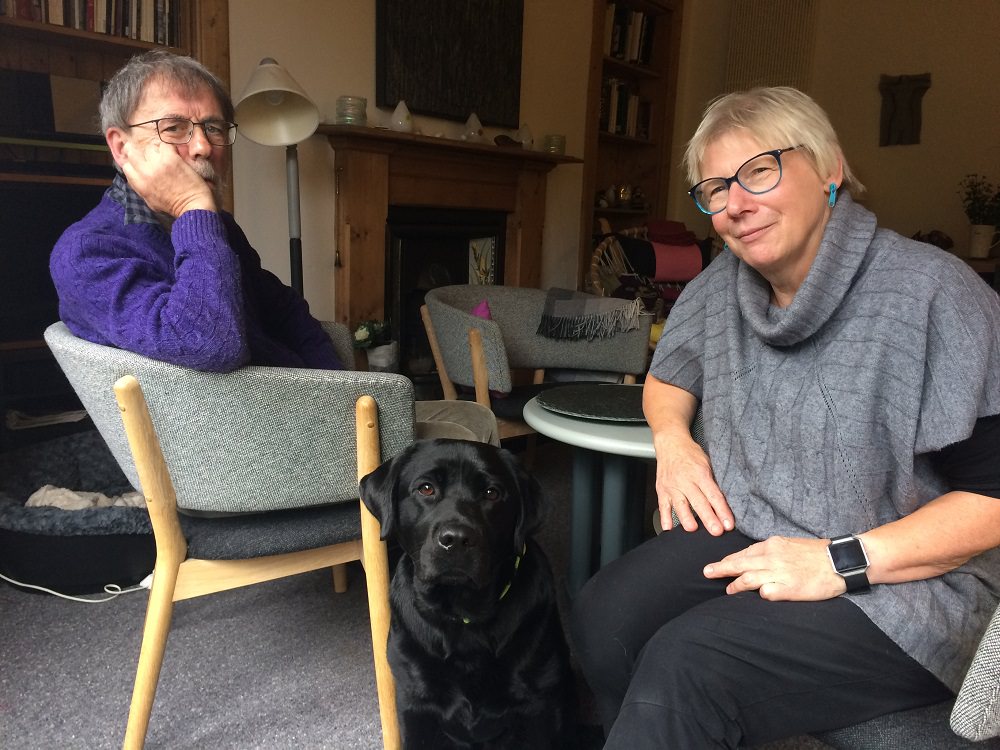 Now settled with Malcolm, Imke tells us, “Malcolm has Parkinson’s as well as associated Dementia, so regular medication is essential. Webb now brings Malcolm his medication twice a day, literally ‘regular as clockwork’.

"Parkinson’s makes the face look very ‘wooden’ and expressionless, but Webb makes Malcolm smile, a glimpse of his old self. And who can refuse to do physiotherapy exercises when the exercise mat is rolled out by a tail-wagging Labrador!

"As Malcolm becomes less physically mobile and mentally active, Webb will take on additional tasks - helping to undress (he already pulls off the socks!), fetching items and reassuring Malcolm when he becomes agitated. Having Webb just makes our future look less bleak.” 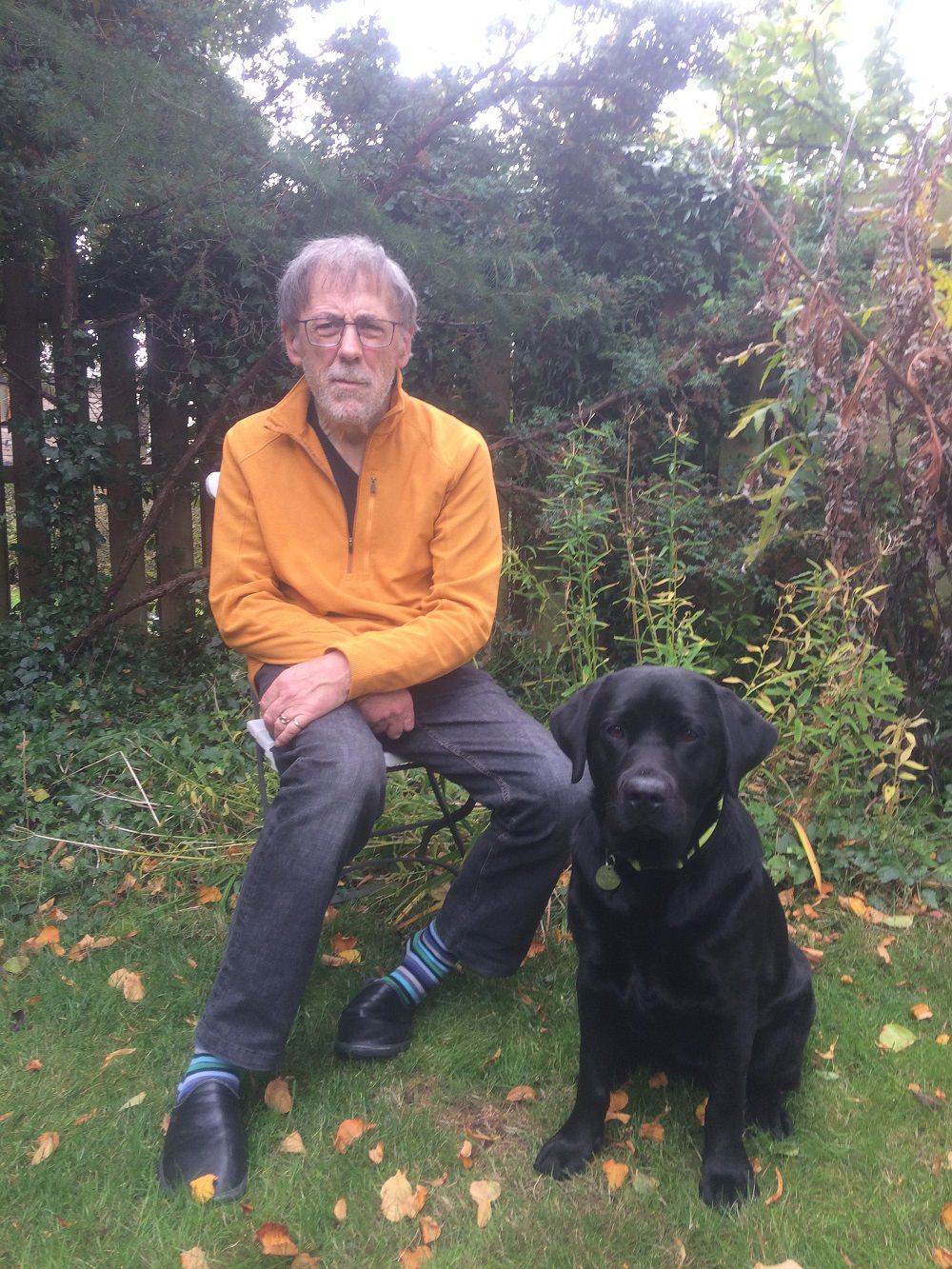 Fiona tells us the future looks very bright for the Dementia Dog Project telling us the project “delivers significant social impact on many levels – for citizens under custodial care, for people living with dementia and in boosting charitable services in helping train more assistance dogs." 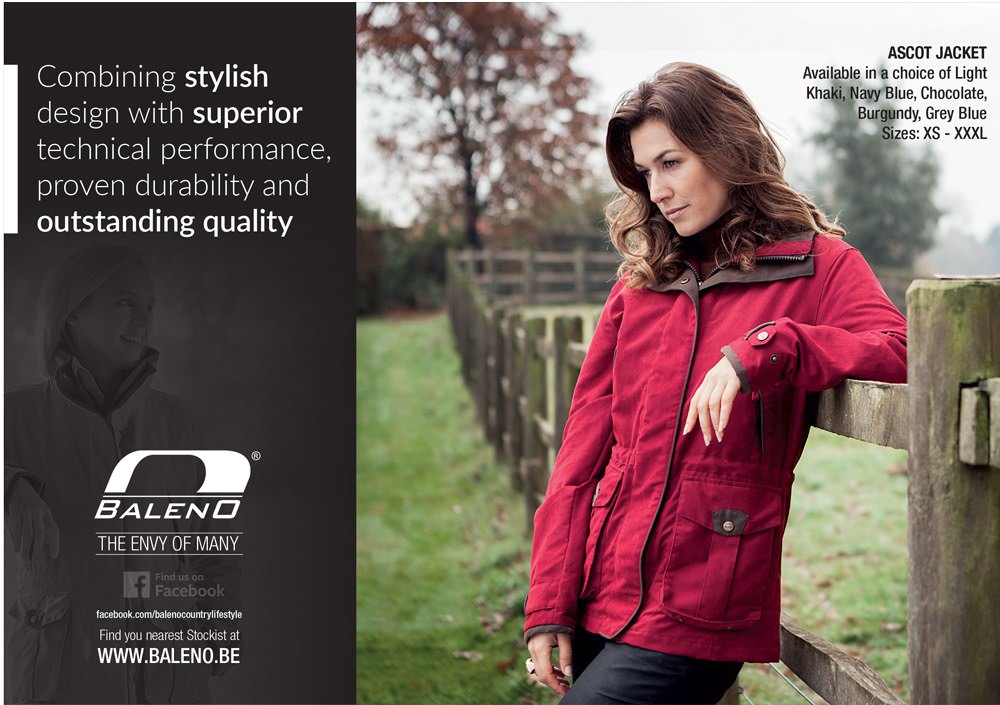 What's next for dementia assistance dogs?

Although the project is still in its early stages, she tells us over the next three years there are big things ahead.

“Over the next three years we are currently focussing on trialling new approaches – both through dementia assistance dogs helping couples to live independently for longer at home, and through dementia community dogs helping bring positive outcomes for people at later stages of dementia out in the community - to build research-based evidence into how assistance dogs and community dogs can help people to live well with dementia. While building this evidence we will be exploring potential sustainable ways to facilitate a wider role of the service in the future. 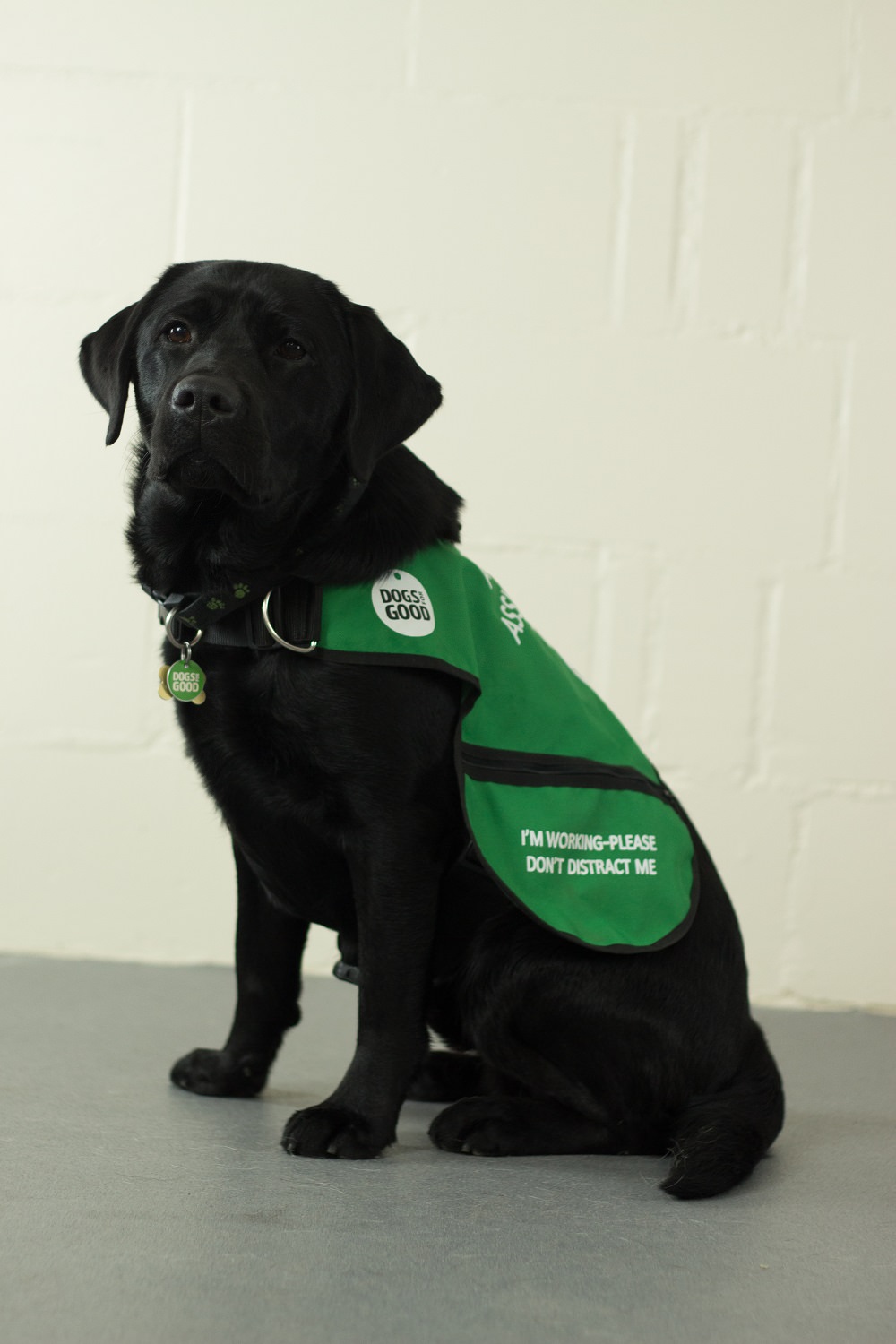 “Thanks to funding provided by the Life Changes Trust and a National Lottery grant from the Big Lottery Fund, the Dementia Dog Project is going from strength to strength, growing our small staff team to now also include a Community Dog Handler and part-time Dementia Specialist.

“The Dementia Dog Instructor will be training and providing eight dementia assistance dogs for people in Scotland, providing ongoing aftercare support for each recipient team (the person with a diagnosis of dementia, and their fulltime carer).

“The Community Dog Handler will be training a dementia community dog provided from Dogs for Good, and then as a team going out and about in Scotland’s communities to pioneer new events and therapy activities to help improve the quality of life for people living with dementia at different stages of the disease. The Dementia Specialist will ensure that all our project development strongly reflects a person-centred and rights-based approach in working with people with dementia.”