With Christmas around the corner, we've decided to up our review game to share more ideas of things to do, places to go and stuff your dog might like to make this Christmas one to remember.

We happily admit to being a little obsessed with pet tech. Pet treat cams are, in our humble opinion, life-changing - but what if your dog is more driven by play than food?

After testing out an automatic tennis ball thrower last year, which admittedly didn't go quite as planned, we have had our eye on the PetSafe® Automatic Ball Launcher for a while now because from all we'd read, it seemed to be designed for dogs of all ages and sizes, which was quite intriguing.

So when the opportunity came up to review and find out more for ourselves, we lept at the chance and decided to ask one of our newest reviewers, Ruben and his tech savvy owner, Sean Endicott to road test it for us. 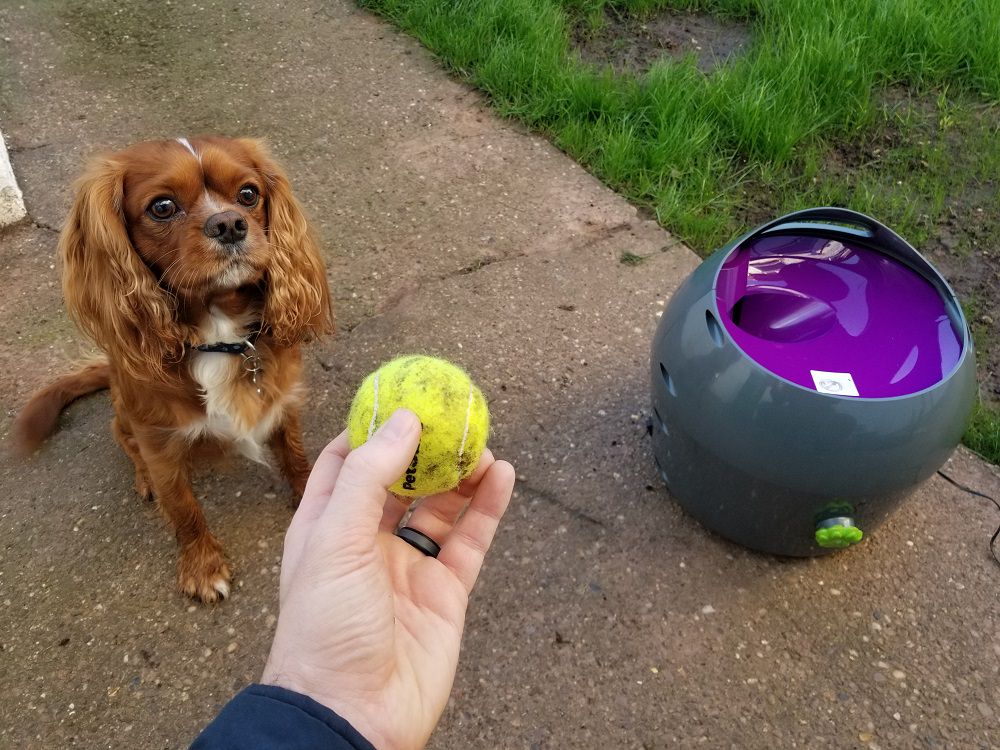 Here's how they got on.

You need to be careful when walking around my house at night. Because if you step on a squeaky toy you’ll hear the jingle of a collar and the scampering footsteps of our Cavalier King Charles, Ruben. He loves to play tug, he loves to play fetch, and he’ll bolt up from a dead sleep for the chance to play.

With a dog so keen to play, the idea of an automatic ball thrower was quite intriguing to us. In comes the automatic ball launcher available from PetSafe for £129.99 to potentially save my shoulders from being sore while also entertaining our little fur baby. We’ve had the ball launcher for a couple weeks and are generally impressed, though there are some things we’d like to see improved.

What’s in the box?

The packaging is simple and there isn’t too much in the box. You get the launcher itself, two standard sized tennis balls (the machine is only designed to work with tennis balls), the power cord, and a manual. The version we received was shipped from within the UK and came with a very well-designed plug with interchangeable adapters, but this could be region-specific since they do ship worldwide.

The box does not include any D-Cell batteries which are required if you want to use the ball away from a power outlet. 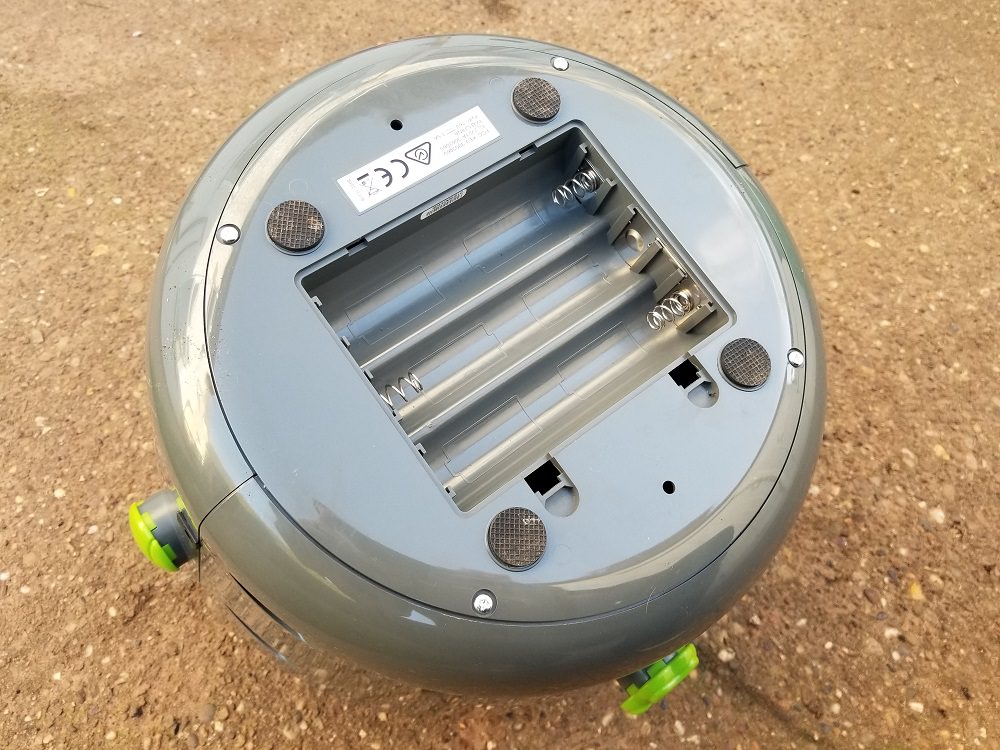 The automatic ball launcher has nine different distance settings and six different angle settings. This allows you to customise the flight path and distance of a ball to utilise the space you have available. It can be fired as short as eight feet or fly as far as thirty feet. This is great for if you want to play indoors but don’t want to hit the ceiling or if you want to take the launcher outdoors, though thirty feet is relatively short for some dogs.

You adjust the angle and distance of the launcher using the two knobs on the device. The paw-shaped knob changes the angle and the tennis ball-shaped changes the distance a tennis ball will fly. With so many different settings for each of these options, it might be worth testing out the machine without your dog around as you won’t want to torture them as they watch balls fly every which way. 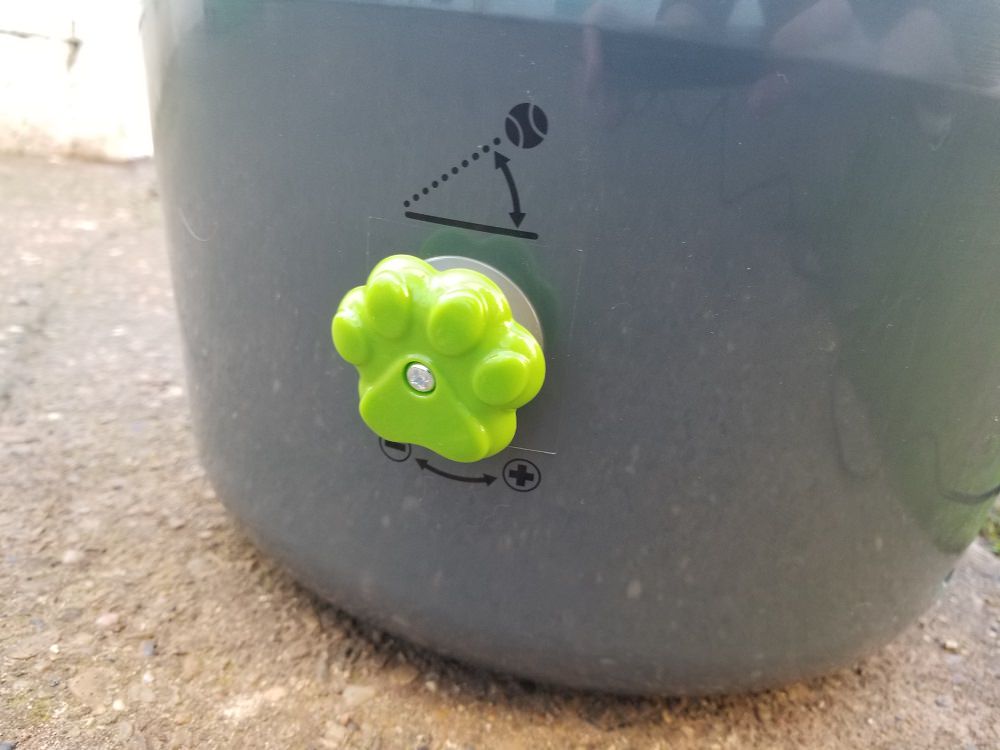 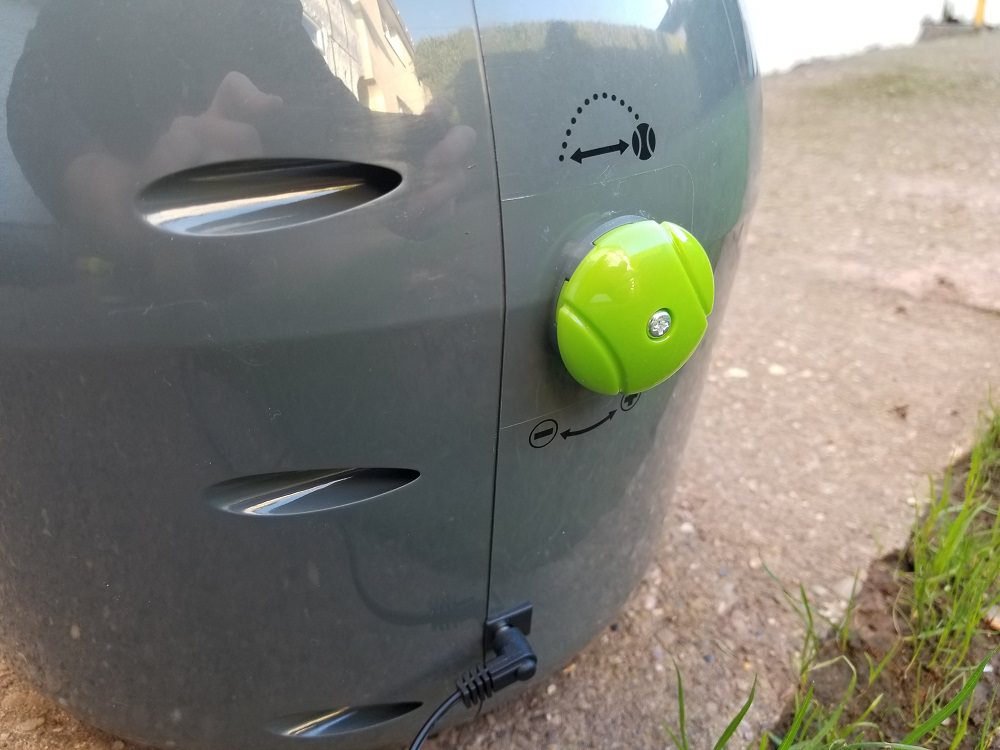 The launcher is relatively consistent when it comes to where balls end up. We have a smaller back yard surrounded by hedges. If a ball was launched too far it would end up in a neighbour’s yard and be a hassle to get back, not to mention we’d have to try to explain to Ruben why his ball is gone. With the control options and consistent shooting, balls flew safely into the corner of our yard without ever threatening to fly out of it.

An automatic ball launcher can sound dangerous. After all, you’re having a machine fire a ball while your dog is close by.

Thankfully, this launcher comes with a motion sensor to ensure that your dog doesn’t get hit. After you load a ball you hear a high-pitched series of beeps, this indicates that the machine is getting ready to launch the ball. But if your dog is too close to being directly in front of it, the machine makes a buzzing noise and doesn’t launch the ball. This is a must-have feature for an item like this and this launcher’s sensor works well. 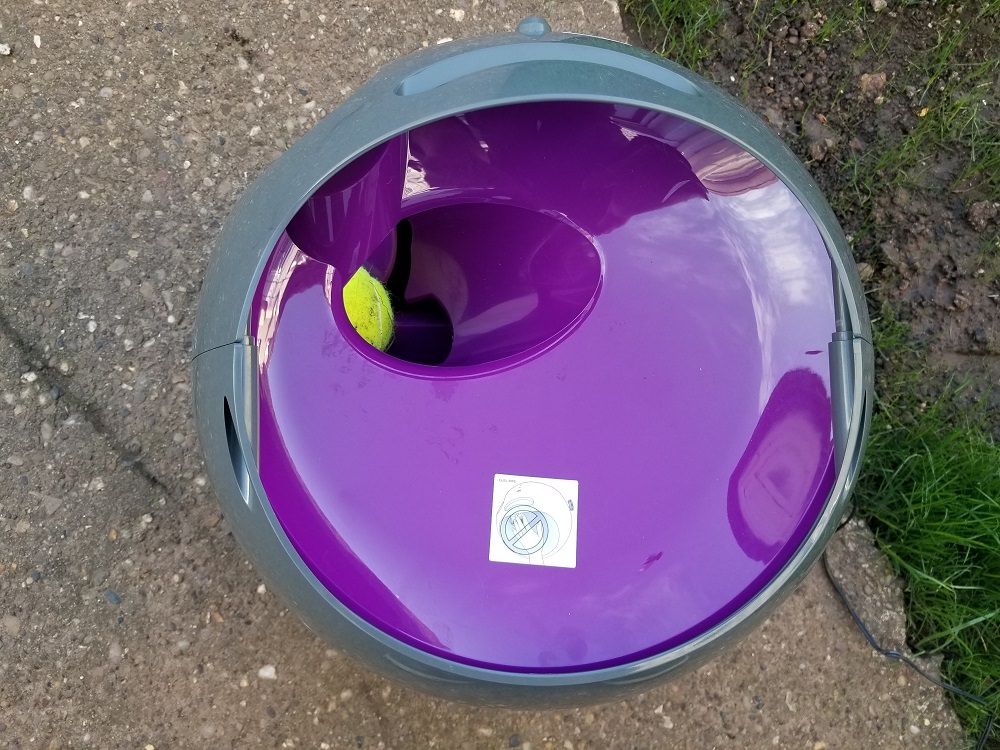 Ruben admittedly never learned how to load the machine himself, likely due to poor teaching, but he did fetch balls the machine launched.

When he brought the balls back I would load the machine by hand and if he stood to the side it would fire but if he was too close it wouldn’t. Ruben didn’t get hit in any of our testing, but I admit that I was nervous he would just because it’s harder to trust a machine than yourself. It’s worth testing out the motion sensor yourself to make sure you feel confident in it and ease any worries. Over time you’ll develop your own level of comfort with the machine and also get a gauge for how much you can train your dog to stay away from the front of the machine.

The automatic ball launcher is fairly straightforward to use. There are no parts to put together or a tricky setup. But there are a couple things that if changed would improve the product.

First, the launcher could come with batteries. While the launcher can work with the power cord, it has a handle on it which indicates that it is designed to be mobile. Most people don’t have four D-Cell batteries lying around so they can’t get up and go play as easily. 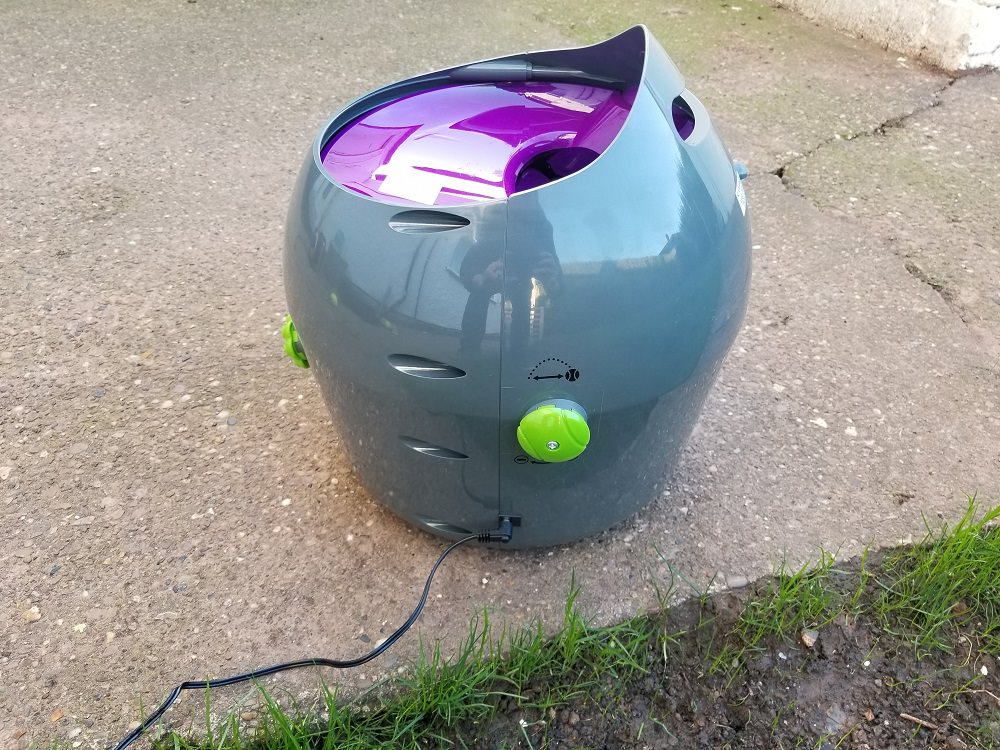 This is designed to give your dog a break but if you have multiple dogs or just a dog who needs more playtime, you’ll have to throw the ball yourself, which somewhat defeats the purpose of having a ball launcher.

Is it worth it?

£129.99 is not a small amount of money and the worth of an automatic ball launcher will vary on a few key factors.

First, you must have a good idea if your dog will play with it. Ruben seemed keener to chase balls I threw myself than ones from the machine. He also didn’t learn to load the machine himself. These are due to no fault of the maker of the launcher but if you have a dog that won’t use it, that doesn’t really matter. If your dog is trainable and you are a good teacher, then it’s more up your alley.

The next factor is how much room you have for your dog to play fetch. The launcher is ideal for use inside the home with enough room to play fetch or relatively small yards. It’s made more for your dog to entertain itself by running laps than chasing balls that soar through the air forever.

While the ball launcher could be used to entertain your dog without you having to be nearby, you can also just use it to launch balls that you load yourself. Using it this way would be ideal for someone who wants to play with their dog but can’t throw a ball well or for that long.

That makes the final factor of its value your own ability and willingness to play fetch. If you’re home often, play with your dog on a regular basis, and can throw a ball without soreness, then you may think twice. But if you or someone you know doesn’t meet those three qualifications then the automatic ball launcher could be a good buy.

Thanks again to PetSafe for sending us their automatic ball launcher for review. Find out more online and read more reviews at PetSafe.net or on Amazon.

PetSafe Automatic Ball Launcher Review: Is It Worth the Investment?