Britain’s badly behaved Beagles and disobedient Dachshunds could be running amok thanks to an evolving desire amongst owners to humanise their pets. There’s little doubt that dog owners today are far more educated on the main principles of dog behaviour and to some extent, canine psychology but the huge growth in the pet behaviour industry also tells the tale that modern dogs are as naughty today as they've ever been.

Ryan O'Meara thinks he might know why that is.

For years Hollywood has portrayed film-star canines as animals whose motivations are based on human perceptions and values. Lassie saves a rabbit from death, for example, or Benji solves a crime, or Rin Tin Tin protects the fort from outlaws. These animal films are very entertaining, and the canine actors are extremely well trained, but they’ve popularised the notion that our dog's abilities to think, feel and reason mirror our own.

Could this misguided view of canine psychology be a major contributing factor to a large percentage of undesired dog behaviour seen in thousands, if not millions of homes around the world?

Expecting a dog to do things he simply cannot or has no understanding of is not uncommon. Expecting dogs to think as we humans do is also widespread. The reason the dog beat off competition from all other animals to the title of man’s best friend is in no small part to do with his sheer skill at adapting his way of life to fit in with ours. It is this skill that is the likely cause for our frequent misreading of his intentions and motives.

Us modern dog owners are, almost without exception, guilty of inadvertently teaching our dogs bad behaviour by simply not, for want of a better expression, treating a dog like a dog. Ouch! Why did I feet a little pang of guilt when I wrote that? Why do I feel like the bad guy or some kind of archaic, Victorian disciplinarian for saying it’s not only OK to treat a dog like a dog, it’s the BEST way to live in harmony with them? 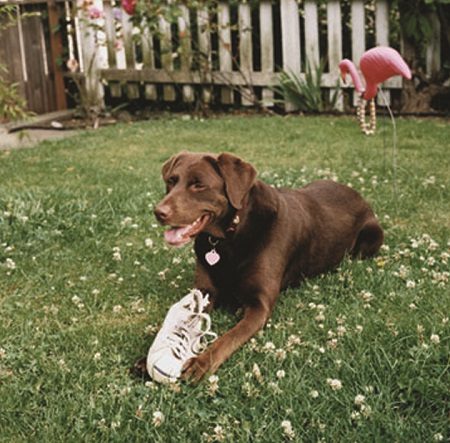 Many dogs have their personalities labeled fairly early on in their lives. They can be painted as spiteful, daft, stubborn, ignorant, jealous, mischievous and sometimes just plain bad. “You bad dog!” We've all heard it and many of us have used it.

The problem is, whenever we try to evaluate canine behaviour using human values we are misinterpreting our dogs emotions and behavioural motives.

All but the very worst anthropomorphic dog owners can improve their relationship with their dog and subsequently their behaviour if they make a valid effort to understand their dogs unique emotional make up.

It’s certainly no heinous crime to be anthropomorphic, even the very best dog trainers are guilty at some point or another. But it can lead to big problems if little or no effort is made to better understand our canine friends.

Giving your dog a special dinner on his birthday or filling a Christmas stocking with dog toys and treats is anthropomorphic in the extreme. Is it a bad thing? Of course not.

Owners should be wary of their anthropomorphism when it is likely to impinge on their dog’s behaviour especially when it comes to good timing and fair corrections. For example, owners often correct their dog based on a "guilty look" on the dog's face, assuming he "knows" he was wrong. The dog doesn't know, any more than he knows it is his birthday or Christmas. Some classic behavioural mistakes are made due to anthropomorphism. Dog runs off. Dog doesn’t return when called. Dog slinks back to annoyed owner looking ‘guilty’. Dog is admonished. Owner is happy. Dog thinks he’s been punished for coming back to his owner. His demonstration of a fearful response, thoroughly justified. It’s hard when we use our human emotions to reason but in this circumstance, the dog should have been well praised. It’s hard because anthropomorphism is in full swing. Our emotions are mixed up with our dogs.

Another example. Many dog owners - especially owners of younger dogs - experience a chewing problem at some point. Many owners are left frustrated when their dogs chew furniture, rugs, shoes, and the like when left alone in the house. They say that they have tried everything. "He knows he has done wrong," they say. When asked what they have done to correct the dog, they say, "I shout at him and show him what he chewed. I tell him he is bad. Sometimes I smack him with the newspaper."

This procedure is usually repeated many times while the dog continues to destroy the house. Eventually the time arrives when the owner comes home and the dog runs and hides. Some dogs may even stand and shiver with a terribly "guilty look" on their face. Then, periodically, the owner will come home and not find a mess. The owner will be happy and will praise and pet the dog. The dog will respond to the happy sound and good-feeling rubs with a wagging tail and a happy appearance.

This cheerful behaviour reinforces in the owner's mind that the dog knows that avoiding chewing is "right" and that chewing up the house is "wrong." "He just wants to get even with me for leaving him at home." Nothing could be further from the truth.

Anthropomorphism is widespread among dog owners. But it’s certainly not all bad.

It (the study) challenges the long-held scientific belief that only humans and chimpanzees are able to experience secondary emotions such as jealousy, guilt, shame and pride.”

He said dogs could feel intense pangs of jealousy and animosity when in a 'love triangle' involving the carer and another person or animal.

'The study set the typical behavioural index of jealousy as pushing between the carer and the third party, and this is what happened more than 80 per cent of the time,'

No scientist would argue with the fact that dogs get angry and also have fear. So it is important to realise that there is a huge degree of overlap between humans and other animals.

We share a common evolutionary history, our brains are remarkably similar, the areas of the brain controlling basic emotions such as anger, fear, joy, surprise, depression are exactly the same as are the neurotransmitters.

A lot of what we know about brain behaviour relationships in humans is based on animal research. The limbic system which controls primary emotional drives is exactly the same in all mammals.

When we see a dog scratching at a door and trying to push it open it would be really crazy not to realise that the dog is trying to get through the door. The important point is that describing animals in psychological terms that are also attributable to humans is not necessarily wrong.

Emotions are the way that evolution makes sure that behaviour is appropriate, you run away from things that could harm you, you fight for things you need, you are jealous of your mate etc. I don't think that dogs reason or think in anyway like humans, however, I do think that their emotions are in some way like humans.

I suspect the emotion of jealousy was around long before humans were around! I do not make the case that a dog’s jealousy is exactly like human jealousy. For example in human emotions we often relive them constantly in our private mental lives, dogs jealousy I suspect is confined to the situation that caused it. The function of the more complex social emotions is to regulate social interaction. I find it highly unlikely that dogs as a highly social species would not have sophisticated social emotions.

The purpose of our study was to investigate on what grounds people were making the claims for their dogs displaying certain emotional traits usually associated with humans, and the contexts described were appropriate.

As a scientist all you can ever know is the context and the behaviour. We can never know what is going on inside another organisms head. Humans included!”

Do you agree that modern dogs are less well behaved than years gone by? Let us know!