Why do dogs wag their tails in certain ways at particular times? What are dogs saying to each other when they wag their tails? How can we read the signs of a dog's wagging gestures and tail positions?

Tail position is an important indicator of social standing as well as the dog's current mental state.

And there’s often little difference between a happy and excited wag and a nervous wag of a dog that’s about to snap.

So why do dogs wag their tails and what are they trying to tell us?

Dogs wag their tails as a way of communicating. It's that simple.

Dogs can't talk, but they communicate their feelings and intentions through body language. The dog's favourite way of doing this, with humans and other dogs, is via their tail. 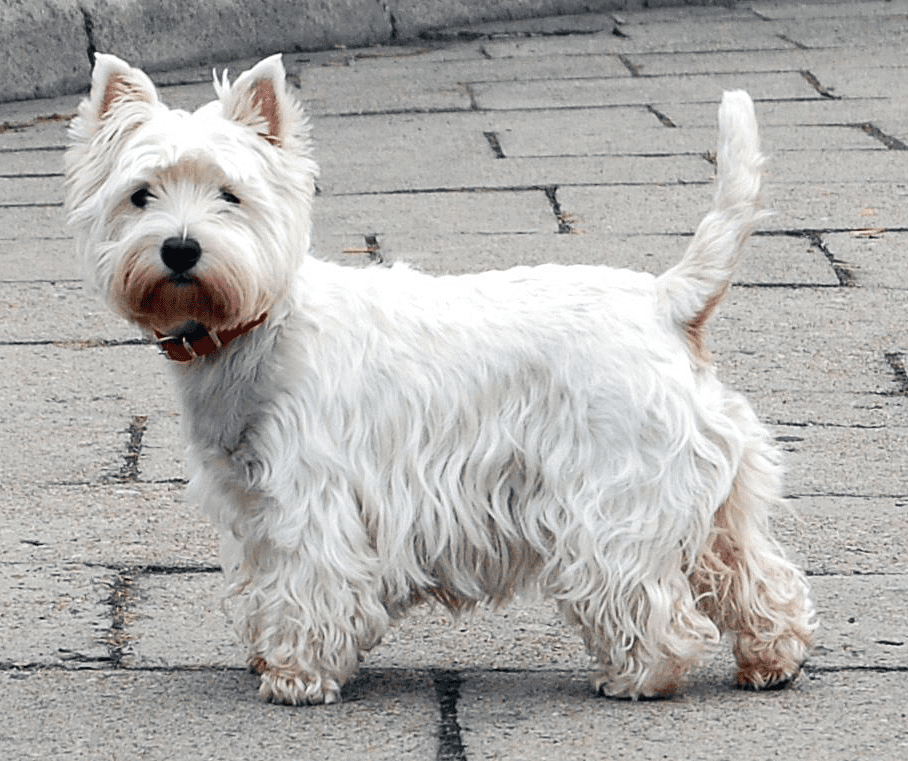 There will be some variations, of course, depending upon the natural tail position of the dog: a West Highland white terrier will carry its carrot-shaped tail higher than a golden retriever with its flowing, feathery tail and a greyhound's relaxed tail position is lower yet, but understanding why dogs carry their tails in a particular way is useful for every dog owner to know.

What Your Dog's Tail Positions Mean

Almost horizontal, pointing away from the dog but not stiff: This is a sign of attention. It roughly translates as "Something interesting may be happening here." 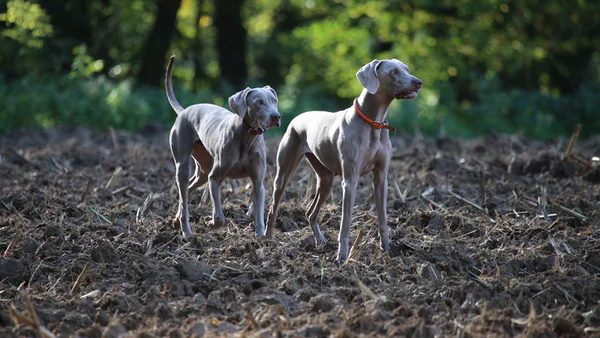 Straight out horizontally, pointing away from the dog: This is part of an initial challenge when meeting a stranger or an intruder. It roughly translates as "Let's establish who's boss here."

Tail up, between the horizontal and vertical position: This is the sign of a dominant dog, or one who is asserting dominance, and translates as "I'm boss here." 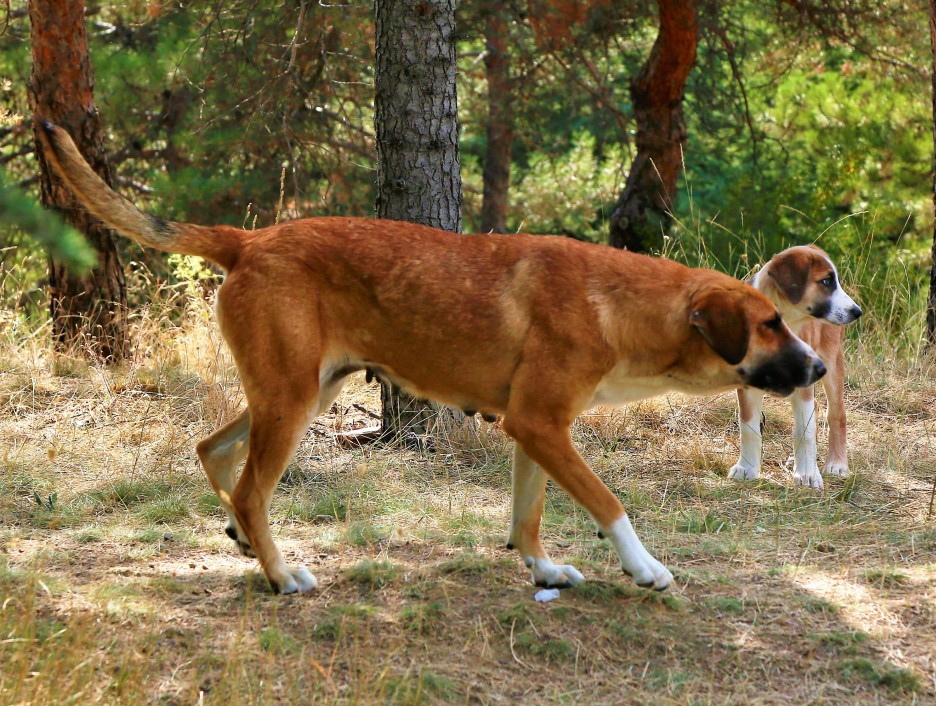 Tail up and slightly curved over the back: "I'm top dog," this says. It is the expression of a confident dog who feels in control.

Tail held lower than the horizontal but still some distance from the legs: "I'm relaxed." "All is well." 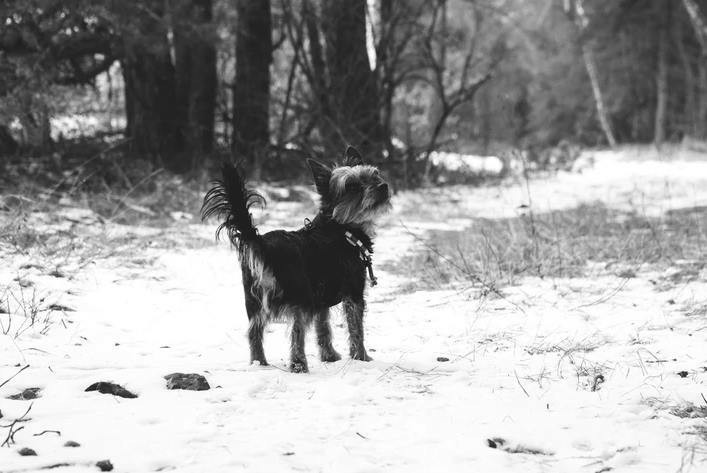 Tail down, near hind legs: This changes its meaning with the posture of the dog. If the legs are still straight and the tail slightly brushes back and forth, it means "I'm not feeling well" or "I'm a bit depressed." If the legs are slightly bent inward, giving a slight downward slope to the back it means "I'm feeling a bit insecure," especially in an unknown setting or situation.

Tail tucked between the legs: "I'm frightened!" or "Don't hurt me!" This is especially common in the presence of a dominant dog or person when it can also mean, "I accept my lowly role in the pack, and I'm not trying to challenge you.

Bristling hair down the tail: The bristle in the dog's tail is a sign of aggression. It may modify any tail position. Thus, with the straight-out it means "I'm ready to fight if you are!" and with the tail, slightly up or over the back it means "I'm not afraid of you and will fight to prove
I'm the boss."

Crick or sharp bend in the tail when held high: This is more characteristic of the dogs that look like wolves, such as the German shepherds, and means much the same as the tail bristling. It is the precursor to possible aggression.

Broadtail wag: "I like you." This is often shown during play, when one dog seems to be attacking the other, pouncing, growling and barking. The wagging tail serves as reassurance that this is all in fun. It also means "I'm pleased" in many contexts.

Slow tail wag, with tail at half-mast: During dog training, I interpret this as "I'm trying to understand you. I want to know what you mean, but I just can't quite figure it out." When the dog finally solves the problem, the speed and size of the tail wags will usually markedly increase.

Wolves greet each other:

More on dog body language and canine communication: why do dogs bark?

Some instinctive social behaviours of the wolf may be left unexpressed in the dog simply because the opportunity never arises for them to be expressed in a new social setting. But even when dogs range freely in wild or semi-wild circumstances, they show distinct divergences from their wild ancestors.

As part of his behavioural study of the wolf, Erik Zimen raised a pack of poodles and a pack of wolves under quite similar conditions. While the wolves ran free inside an enclosure, the poodles had free run of the rest of the property.

Zimen and his colleagues recorded 362 specific behaviors displayed by wolves, everything from yawning and stretching to howling and tail wagging. The poodles displayed 64 percent of those behaviors with little or no change. About 13 percent of wolf behaviors had vanished altogether, and 23 percent persisted but in markedly modified form.

Zimen found that in performing many of these modified behaviors, the poodles lacked the seriousness of purpose; compared to the wolves, the poodles were more playful or simply inept. As Raymond Coppinger observed with his village dogs, Zimen's poodles were incapable of hunting large prey. The poodles readily chased things, but their choice of "prey" was indiscriminate - birds, leaves, bicyclists - and it was clearly a game, an end in itself, very much as with young wolves at play.

The most striking differences seen in the poodles were in their expressive behavior or rather, lack thereof. Wolves exhibit a rich array of facial expressions, ear movements, tail positions, and body postures. In poodles, many of these expressions were greatly simplified, and many were absent altogether.

The lip-curling, snarling, and baring of teeth displayed routinely by wolves in defensive and aggressive situations was considerably muted and simplified in poodles. In part, this is simply because poodles are generally less fearful and less aggressive and tend not to mind invasions of personal space as much as wolves do: they just have less of an impulse to act annoyed.

Starting as early as four weeks, wolf cubs begin to sleep apart from one another more and more often. By the time the cubs are four to six months old, they are like adult wolves, and almost never make contact with another wolf when sleeping.

The poodles, however, continued to frequently lie together through the age of eight months or older, and even as full-grown adults did so about a third of the time, and even in hot weather when there was no conceivable reason for huddling to preserve body heat. Dogs are, in other words, simply more pacific and easygoing by nature.

Studies of poodle-wolf hybrids suggest that there may be more than one behavioral component to dogs' milder dispositions. When Zimen recrossed poodle-wolves ("puwos") together, these second-generation hybrids came in a mixed assortment of behavioral types. Some were timid about approaching humans but were very affectionate when they did; others were tame and not disposed to flee from novelties but were emotionally aloof. Zimen suggests that a reduction in the flight instinct and a greater capacity for socialization and bonding may be separately inherited traits, though both are necessary for wolves to become dogs. 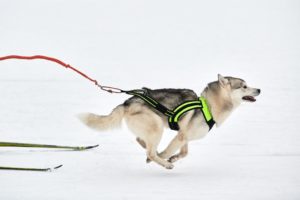 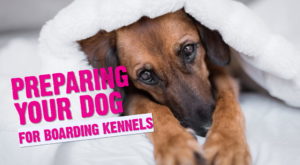 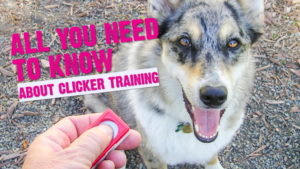 A Beginner’s Guide To Clicker Training Your Dog