Six months ago Kate Birkett, 33, combined her passion for animals and years of managerial experience to begin a new career at Jerry Green Dog Rescue. Despite working her way up to a manager’s position at a college in Yorkshire, Kate couldn’t keep herself away from working with animals. So much so that she even travelled to Spain to dog sit for a friend who was away on holiday.

Kate said: “Dogs have been in my life from a very young age. I spent a lot of time dog-sitting over the years and volunteering as a dog walker. It became a bit of a joke between my friends and family and I became known as the person to call if someone with a dog was going away.”
She was already familiar with Jerry Green Dog Rescue and the charity’s work, so when the job came up it was an opportunity not to be missed and she was finally able to make the move into animal welfare that she always wanted. 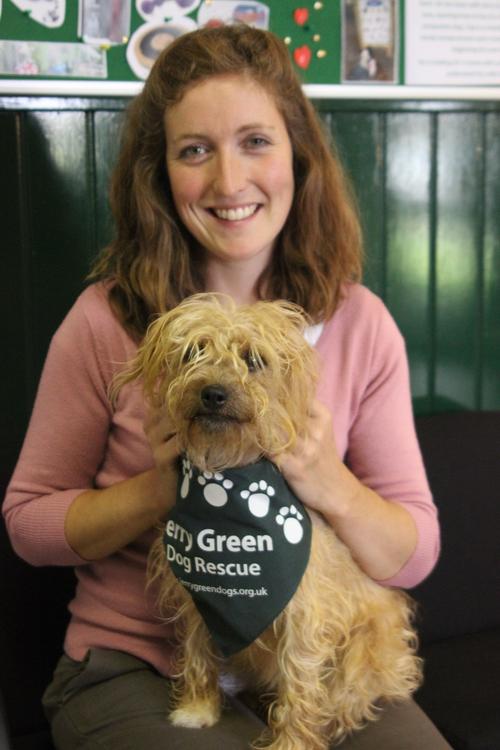 Now Kate looks after two of Jerry Green’s five rescue centres in North Yorkshire and East Yorkshire, with a total of 15 staff and up to 41 dogs.

“I love this job because no day is ever the same. In one week I am dealing with repairs at the centre and management of staff, regularly speaking to local supporters, accepting donations from the public and working with the fundraising team to organise events.

“I will also meet people who are interested in adopting a dog. We have a Meet & Match scheme which helps us to find the best dog suited to the owner’s lifestyle and we introduce them out of the kennel environment, as it’s less stressful for the dogs. I also talk to people who can no longer care for their dog and need our help. Sadly our centres are always full and we always have a waiting list.”

Jerry Green Dog Rescue has increased its rehoming figures across all five centres in Lincolnshire, Nottingham, and Yorkshire year-on-year and has rehomed 1434 dogs since 2012.

“Some days are harder than others. Recently a Jack Russell came in who was very thin and emaciated. Despite that she’s a healthy dog and with some TLC she’ll grow stronger and ready for rehoming. Neglected dogs are always difficult to see and pull on your heart strings, but the rewards far outweigh these times,” she added.

Because of her work commitments Kate doesn’t have her own dog so she really enjoys the days when a dog joins her in the office for the day and she goes on group dog walks; both are a key part of socialising the dogs before rehoming.

“The charity has a strong ethos which puts the welfare of the dog first, which is something that really drew me to work here. I’m really lucky to work somewhere that feeds my passion and love for animals but also makes a real difference to animal welfare,” she concluded.