Last year, a dog named Cola was rescued in Bangkok after he was attacked by a neighbour for chewing their shoes. As a result of the sword attack, he was left without front legs and in need of serious care.

Now, thanks to the rescue who took him in and a Scandinavian orthopaedic laboratory in Phuket, he has a chance to not only live his life to the full, but he will go down in history as the first dog in the world to be fitted with suspended prosthetic legs with blades (like those used by Paralympic sprinters) - and as this video shows, he's taken to the blades like a true champion, jogging up and down the beach within minutes of having them fitted.

Cola was brought to the Thai holiday island of Phuket by Gill Dalley, a founder of the Soi Dog Foundation which, among other things, rescues and treats sick and injured dogs and cats.

Gill and her husband John, a chemical engineer, both grew up in Leeds but moved to Phuket about 15 years ago. 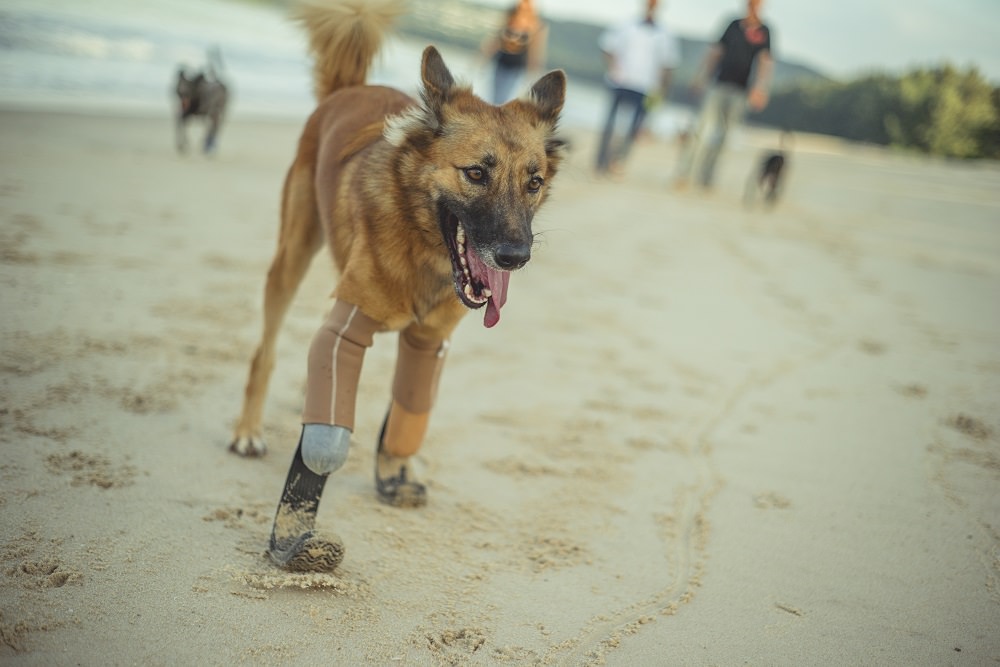 Hearing about Cola’s horrible story, Gill felt an immediate affinity with the pup – she had lost both legs after contracting septicaemia, which almost killed her, and was fitted with prosthetics by Bengt Soderberg, pictured below with Cola, owner of the Scandinavian Orthopedic Laboratory in Phuket.

So she went to Bengt and asked if he could do the same for Cola. He said he would try. 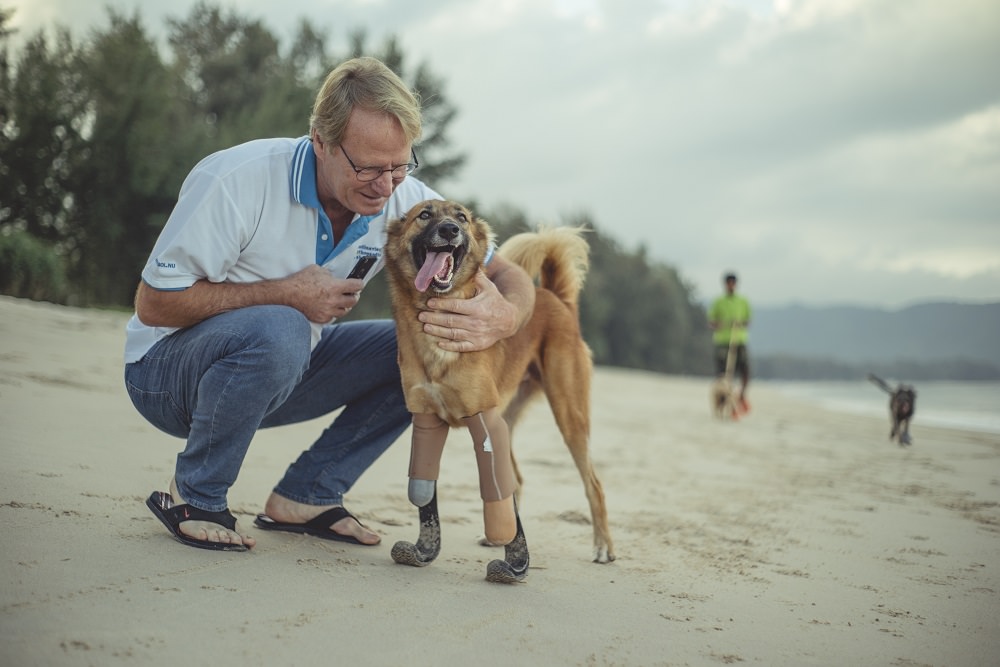 Initially, Cola was fitted with straight glass fibre extension for his legs, but these had no bounce in them and were heavy. So Bengt set about inventing extensions based on Paralympian blades.

Sadly, Gill died in February this year before Cola got his latest legs.

“Dogs certainly learn how to use prosthetics faster than human do, and it is great to see him play and run like the other dogs.”

“He was just six months old when his terrible ordeal happened. Like a lot of puppies, he liked to chew things that were lying around, including the neighbour’s boots.

“The neighbour complained to Cola’s owner, who offered to compensate him for the damage. But it seems that the neighbour wasn’t satisfied with the offer. He came back that night and hacked off Cola’s front legs, using a sword.”

Bengt was intrigued by the challenge of helping Cola. 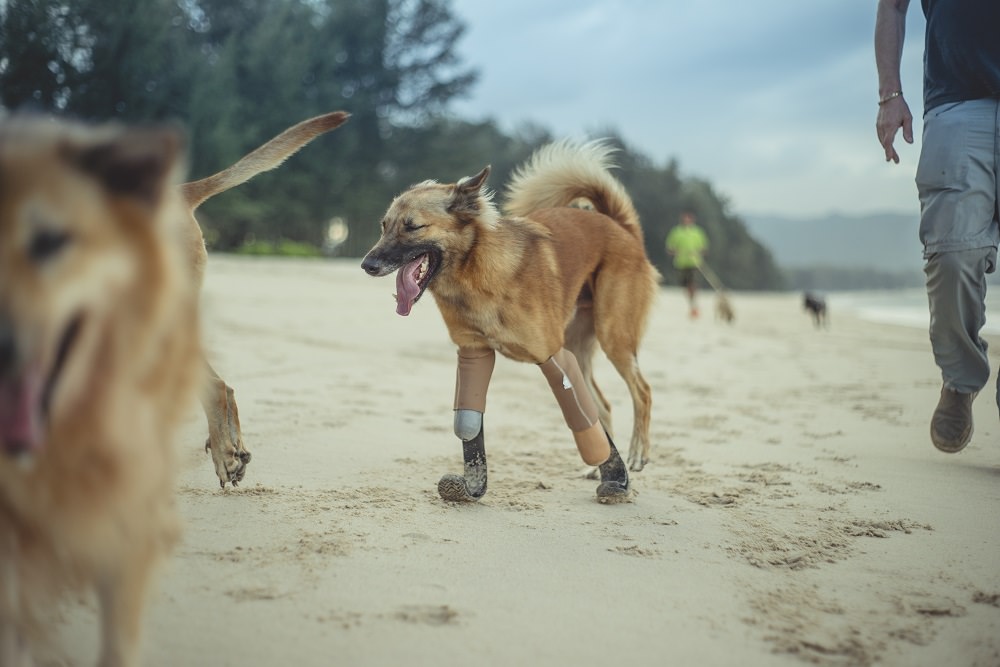 He said, “Gill lost both her legs about 10 years ago and I made prosthetics for her. When she mentioned to me that she had a dog who had also lost his front legs, I knew that the most natural thing for me to do was to help.

“Cola is the first dog I have made bilateral legs for and we have been tweaking the prosthetics so that they don’t bother him, or at least to keep the disturbance to a minimum. 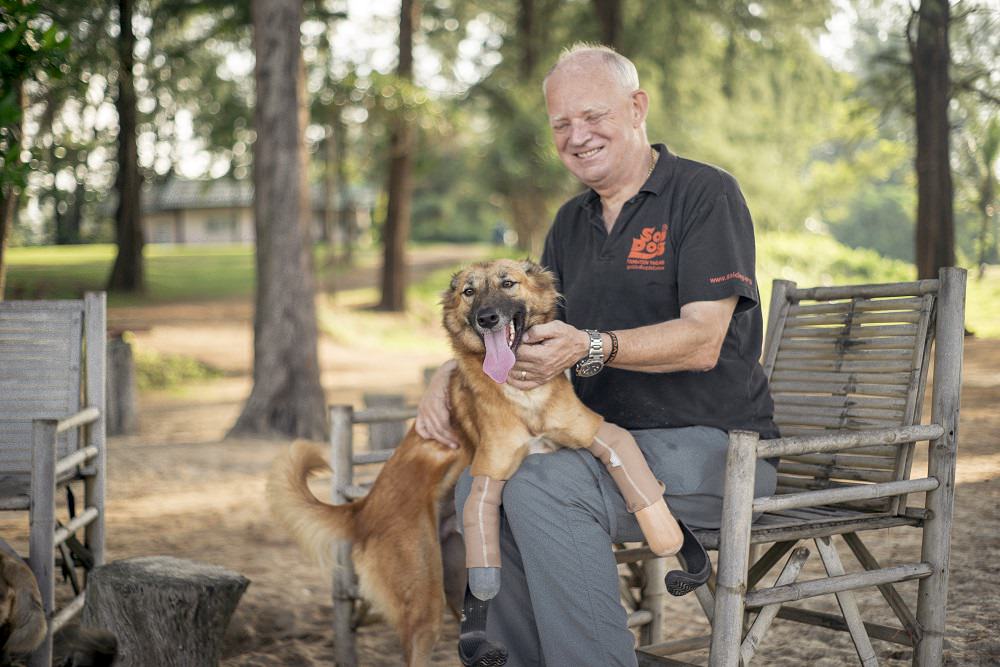 John Dalley and Cola, pictured above

“The new legs took about a year to create and are very similar to what professional athletes use in the Paralympics. We used the same carbon fibre, same structure and same suspension.

“This provides Cola with maximum flexibility combined with low weight, allowing him to run and play like the other dogs do.”