The Fallen Soldiers March was an idea born in the USA with the hope at it's core of honouring fallen soldiers, veterans and those currently active, helping to provide service dogs to veterans in need.

The non-profit organisation is currently running a 'Smooch your Pooch' challenge encouraging people to share photos and videos online of them with their dogs to help raise awareness.

K9 Magazine caught up with Jim Retzke, president of the Fallen Soldiers March, to hear more about their history and how they hope to build a better future for those they seek to support through a dog's companionship.

The Fallen Solders March roots originate from Master Sergeant Jim Williams, a returning member of the 269th Military Police Company, Tennessee Army National Guard whose was deployed in Irqa and survived a Humvee explosion. After recovering from his physical injuries, he sought out to confront the emotional trauma resulting from his service in Iraq by initiating the “Nine Mile March” in August of 2005, and to draw attention to the families that grieve the loss of a friend or family member. The Nine Mile March incorporated a nine mile course beginning at the National Guard Armory in Lebanon, Tennessee and concluding at the Wilson County Fair, reported to be one of the largest county fairs in the country.

Up until 2009, the Nine Mile March had been loosely attended, in fact Williams professed, tongue-in-cheek, “people thought I was hitchhiking”. On Veterans Day 2009, a promise was fulfilled after a challenge had been met whereby if more than 100 soldiers showed up to take the challenge, the route would change and the “Thirty Mile March” was born. 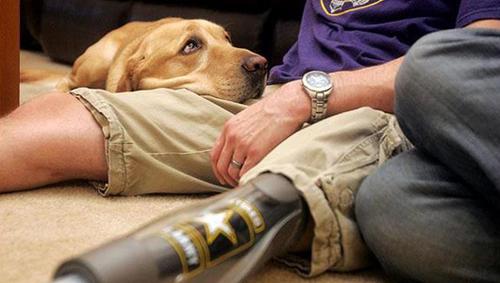 I asked Master Sergeant Williams if I could join him on the Thirty Mile March.  I had been raised to love, respect and value our military men and women, I was not prepared for the range of emotions that God had prepared for me that day as I marched alongside Sergeant Williams for nearly 12 hours, and 30 plus miles.

During the entire day, I fought back tears as I began to take in all the soldiers must have endured as well as for those who survived the emotional or physical traumas which lay ahead for them.

On Veteran’s Day 2010, as the march began the goal was to help raise the estimated $15,000+ required for the purchase of a Service Dog needed to assist a wounded Veteran who survived a 500lb JDAM bomb strike on June 27, 2010 in Afghanistan.  The goal was ultimately realized through the collective efforts of individual patriots, area churches and businesses directly and indirectly involved in the 2010 Fallen Soldiers March™.

The blessings observed and received during the entire march were vast. Over thirty patriots and helped raise the funds required for the Service Dog.

Although I was deeply touched and encouraged by the improvement in the number of people who greeted the Veterans who participated in the March; my heart still remains hopeful, that one day, the entire square will be overflowing with people who recognize the sacrifices our military men, and women contribute to protect us.

On Veterans Day 2011, Lebanon Fire Fighter Chip Vanatta, approached the Fallen Soldiers March to honor the memory of a beloved family friend, Chief Warrant Officer Four Daniel Cole and his co-pilot First Lieutenant Thomas Joseph Williams of the 1-230 Air Calvary Desperados. Both pilots lost their lives engaged in the test flight of a Kiowa Helicopter in July of 2011.

The march this year marked the third year for the Fallen Soldiers March “Thirty Mile March”. Over 200 people attended the reception and we began with less than $100.00 contributing to the majority of our funds to a Service Dogs the previous year, seeking patriotic acts of kindness to save for an additional highly trained Service Dog costing between $15,000 to $30,000.

As we look to the future now the Fallen Soldiers March is very close to completing the screening phase required to identify our first Service Dog puppy candidate to be awarded to a Veteran. Upon completing a rigorous 16 to 24 month training program to learn between 40 to 100 commands by our partner facility, a highly trained Service Dogs dog will be matched and gifted to a Veteran who participated in a screening process.

Currently, we are focused on building our 501 (c) (3) non-profit organization to raise funds to purchase Service Dogs for Wounded Veterans. There is an incredible imbalance in the demand vs. supply ratio and the government's adopted policy to not provide Service Dogs for mobility and invisible conditions such as post traumatic stress disorder (PTSD) and neurological challenges.

To date only 20,000 Service Dog Teams are estimated to be in daily use.   Roughly 3,000 Service Dog teams from all schools and trainers, nationwide, graduate every year.  Dogs serve about 10 years before needing replaced, reducing the number available for new candidates.

Long term, we would like to build a Fallen Soldiers March Ranch where families can observe a state of the art Service Dog training facility. 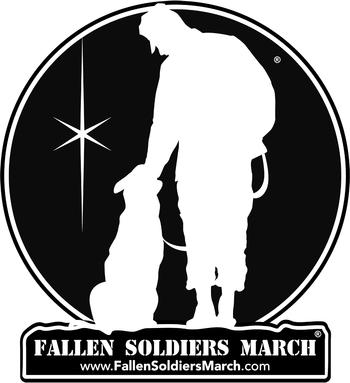 It's our hope our annual march continues to grow and with the aid of campaigns such as our 'Smooch your Pooch' campaign, which took inspiration from the viral ALS campaign which took the internet by storm, the bond between a dog and their owner, and the important role dogs play in our lives can be highlighted.

The Fallen Soldiers March™ is a non-profit organization that provides highly trained & skilled Service Dogs to Wounded Veterans™; seeking the participation of our communities to donate time and resources to honor the sacrifices endured by our Fallen Soldiers, Veterans and Active Duty Armed Forces.

Find out more about the ‘Smooch your Pooch’ campaign online here