Training a new puppy can be a heartbreaking experience for just about anyone that has a conscience. This helpless and adorable little puppy is just staring up at your eyes, making you melt into a pile of love mush. And you think to yourself, “How in the world am I going to discipline this little guy, I just don't have the heart!” Yes, I realise that your puppy is so cute and you just want to hug and kiss his little face all day long, but you must get a hold of yourself and learn to do the dirty deed when necessary. Christopher Boyd finds out more.

What is the dirty deed?

Discipline, plain and simple. You have to muster up the strength to spritz your puppy's nose with a water bottle when needed. You have to learn how to install a little respect into your dog with loud and quick commands whenever he is doing something wrong. It's all about tough love and I know first-hand just how hard it can be.

Don't get me wrong, loving your puppy is definitely a good thing and huge amounts of affection and caring should be given to your dog on a daily basis. However, you have to provide a balanced dose of tough love or else time will go by sooner than you think and your puppy will be two to three times his current size, and with behaviour problems to match. If you do not start taking the necessary steps to initiate training at a very young age, you will miss this golden opportunity to train and socialise your little puppy. Your dog will end up as a problematic adolescent that will both destroy your home and your relationship altogether. Consider the fact that in just one to two years time, your puppy will then be considered a “teenager” and we all know that teenagers can be completely out of control if they were not properly disciplined in their younger years. 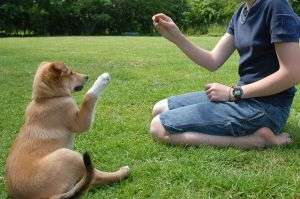 What Can You Do?

Many of us will not have the luxury to afford puppy training classes due to either finances or time. With busy schedules day and night, you have to do your best with the tools you have when it comes to training your puppy. It is imperative that you teach your dog how to behave during this prime early socialisation period. The age between 3 and 16 weeks is the optimum time for such training.

Here are a few questions you can ask yourself to help guide your puppy training initiatives:

1. Am I establishing open lines of positive communication between the puppy and myself?
2. Am I supplying the puppy with the basic necessities of life; good nutrition, sound sleeping quarters, and a clean atmosphere?
3. Am I setting and maintaining consistent rules and boundaries?
4. Are good manners and basic dog etiquette a priority when spending time with my puppy?

See what this vet thinks of puppy socialisation and its importance

Brand new puppies absorb everything that passes through their senses. Whatever they see, hear, taste, smell, and touch, it all gets stored in their brains just like a computer.

Vast amounts of information are constantly being downloaded into a puppy's mind about the people they come across, places they visit, and responses from all stimuli; whether it is the form of communication it receives from people or the scary sounds of vehicles moving by outside.

Most new dog owners completely underestimate the intelligence of their younger puppies. Do not waste this remarkable learning time. Make good use of your dog's capacity to learn and absorb information by teaching him good manners and healthy behaviours that will help guide the pup towards a civilised and respectful member of the family.

It wasn't too long ago that most dog owners and dog trainers did not consider puppies to be trainable until they were well past five or six months old. However, that theory has been subject to dispute for some time now. We now know that puppies as young as two to three weeks of age can start learning due to their rapid brain development. EEG measurements of young puppies show that they have a marked increase in the height, or amplitude, of brain waves when they are awake. And from this point on, puppies acquire new skills at a rapid pace.

Studies have shown that a puppy's early experiences can shape the brain's physiology. Puppies that are raised with lots of toys to play with and problems to solve, along with positive behaviour training, ended up having a higher learning ability and amazingly enough, grew slightly more developed brains than similar puppies that were raised in limited learning environments.

Think about this information. Evidence clearly shows that the puppy which learns various training protocols at an early age, such as climbing stairs or meeting different people will be better developed both mentally and physically then the puppy who is confined to a crate or room all day long and only interacts with its family members, without being stimulated mentally. The good news is that this does not mean that your puppy should have total freedom and domination over the house to do what he wants. However, it does mean that your new dog should spend as much time as possible around you and other people as you go about your day.

Do not make the mistake of giving the pup too much freedom. This will encourage problems with behaviour and when this behaviour becomes a habit, it is increasingly harder to break these characteristics as your dog gets older. You have to let your puppy know that you are in charge and while he has free reign to express himself, a clear understanding of who is the boss must be constituted.

Dog experts and trainers alike all agree that puppy training and socialisation should start as early as possible. Through decades of research it has been concluded that training should begin the moment your dog steps foot in the house. Most puppies are purchased or adopted when they are eight weeks old, however, they can start early training and become socialised as young as two to three weeks. Their minds are like sponges, just waiting to absorb stimuli and information.

Early training should be initiated for a variety of reasons, but most importantly, puppies that will grow to be bigger sized dogs need this early training to prevent them from becoming a burden to the family, and not only for bad behaviour, but also due to the problems it can cause from the dog's size. There is nothing worse than having an untrained 5 stone dog jumping up on you and other people without the ability to stop. By the time these dogs are seven to nine months of age, they will be too strong for most family members to handle without proper training.

Learning Is Effortless At Such An Early Age...

What is even better, is that puppies who experience training at a very early age can learn with very little effort. Any dog that was initiated with behaviour and socialisation skills rarely grow up to have biting problems or other issues that need major corrections. I can personally attest to this information. Being the proud owner of six dogs, four of which were born right here at home, the experiences I have had with dog training will last a lifetime.

The four dogs that have been in my home since the day they were born demonstrated absolutely no behaviour problems growing up. However, my other two dogs were adopted at the same time and were each approximately 7 months old. Needless to say, it was quite a rough learning experience for both the dogs and myself. It took twice the effort and time to get them at the same learning skill level and behaviour respect that my other four dogs were showing, and at the same age on average.