You've probably done the same as me: you've been watching your dog and tried for a moment to comprehend how the animal before you had once been a wolf. Then your mind starts racing and you try and comprehend what came before the wolf. This is the starting point for my most unproductive periods of time, as I can't get back to reality for at least half an hour. Patrick Ellis delves into the history of man's best friend.

Eaves drop on any discussion about the history of dogs and you will find discontent. The same can be said of the academics who have attempted to reach back in time to pluck the source of the canine out of the fossilised rocks in far away deserts. What came before the wolf? Can the Chihuahua and the Great Dane really share the same DNA? Do different breeds come from different wolves? Did we co-evolve, with man adapting to the benefits of his relationship with dogs? Is the dog really a descendant of the snake? 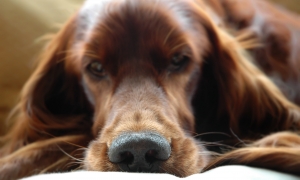 The more science looks into this subject, the more questions there are to answer. Prehistoric remains of most animals are few and far between, the skill in tracing back a species is in filling in the gaps.

To start you off, take a look at this video and ask yourself, how far back do I need to look to find a common ancestry for these two?

50 Million years ago around this time, the land mass of Australia comes to rest after breaking away from Antarctica.

Let’s try to start at the beginning; as far back as we can go. About 50 million years. The modern dog shares its dental pattern with certain Creodonts, which were fish eating mammals. This animal is known to have descended from early reptiles, which may have included snakes. This genetic line failed and the species died out. Around the same time, give or take a few thousand years, there existed a genus of animals called Miacids, who’s fossils have indicated that they also had dog like cutting teeth. These animals were forest dwelling carnivores, and are thought to represent a turning point in the development of carnivorous mammals. It is also believed that the Miacid is an ancestor of the bear.

38 Million years around this time that Alps began to form in Europe.

Fast forward roughly twelve million years and something rather interesting has happened. From the Miacids there have evolved both cat-like and dog-like species. The Feloidea and the Canoidea were both carnivores.

From the Canoidea evolved the coyote-like Mesocyon. The Mesocyon sustained an existence for some time, but it was the wolf-like Tomarctus that began to thrive at this time. The Tomarctus is thought to be the dominant species that contributed to the development of the modern wolf. In the meantime the Wolf species developed into many subspecies.

20 Million years ago it was around this time that the land mass of India collided with the continent of Asia, causing the Himalayas to begin their ascent.

The existing wild dogs such as the Dhole and the African hunting dog shared a common ancestry with domesticated dogs as far back as 20 million years ago during the Oligocene period. These species at that time will have split off into sub species. This was often caused by the species itself expanding and evolving to cope with its environment.

15 Million years around this time humans were speciating from Chimpanzees.

In February 2005, scientists in California’s San Joaquin Valley discovered the remains of a badger like creature that appeared to be part bear, part dog. The remains, when assembled and examined, resembled a heavy jawed dog breed similar to an American Pit Bull Terrier.

A team led by palaeontologist J.D. Stewart discovered bones that dated back 15 million years, placing this creature as a descendant of the Tomartcus.

7.5 Million years ago around this time, the Mediterranean was bone dry.

During the Miocene period, foxes and wolves both had a common ancestor. Previous wolf-like species died out and the stronger and more adaptable species thrived.

2 Million years ago around this time, the area of our brain that commands speech began to form, but we couldn’t use it.

This is where things become more interesting. Molecular systematics show that the domestic dog (Canis lupus familiaris) descends from one or more populations of wild wolves. It is believed not that the dogs evolved from wolves, but the dog evolved from many types of wolf, all of whom had common ancestry dating back millions of years. So effectively there were different dog ‘breeds’ in existence 2 million years ago.

400 Thousand years ago around this time, there was a giant deer in existence in Ireland, its antlers spanned over three metres.

17 Thousand years ago around this time, humans are using mammoth bones to build houses.

It is here that dogs began to evolve from wolves. Wolves had become almost globally distributed and were evolving independently of each other. It is estimated that larger, wolf like dogs were coming into existence in Europe and Russia whereas in the Middle East, smaller dogs were developing as wolves themselves were becoming smaller.

15 Thousand years ago around this time the last ice age ended. Floods separated land masses. China and Japan became separate, as did Australia and Tasmania.

The scientific community estimates that this was the period where Wolves and dogs really began their divergence. Common ancestry from a single gene pool is still present at this time, but dogs and wolves effectively became different animals. Certain animals, such as ancestors of the Husky, German Shepherd, Malinois and Akita remained close to the Wolf in terms of geography and behaviour. These early dogs are known as proto-dogs. This the first sign of what we now know as the ‘domestic dog’.

One of the main contributors to the domestic canine gene pool is the Indian Wolf. Direct descendants from this include many of today’s wolves, plus the Dhole, Pariah Dogs and the Husky. Ancestral species related to the European Wolf bred with the now extinct Indian Wolf (not to be confused with Himalayan Wolves living in India) and from this the following diverse breeds are traced back.

The Saint Bernard, the Pug, the Bloodhound and the Tibetan Mastiff. Although hugely different in size, it is easy to see that these dogs share the distinctive flat face. These breeds would have started life as one, and then started diverging into their respective breeds.

Meanwhile in Europe, other European Wolves were contributing to Spitz type breeds. It is estimated that the Spitz was effectively a small Wolf 15,000 years ago and reached divergence as time went by and smaller, whiter offspring were born. The first terriers and ancestors of herding dogs are also traced back to this wolf.

The cross breeding of European and Chinese Wolves is responsible for most toy and oriental breeds. These wolves were still in existence for thousands of years after their descendants had become established and were able to mate with them to produce slightly larger, stronger versions of the dogs that were initially their descendants. The Eastern Timber Wolf is a direct ancestor of dogs commonly known now as sled breeds.

12 Thousand years ago around this time, the earth had a smaller population than London has today.

Even as long ago as 12 thousand years, European and North American dogs were cross breeding. It was possible for man, by crossing the Bering Straight, to get to the New World from Eurasia. Fossilised remains show that man even made this journey accompanied by dogs and wolves.

Domestication began to happen more than fifteen thousand years ago with wolves. Many researchers believe that man’s partnership with wolves and dogs is the reason that modern man (Homo Sapiens) survived. Species of prehistoric man such as Neanderthal or Homo Floresiensis became extinct, as they were inefficient hunters. Whilst Homo Sapiens began to hunt in packs around the time that they became associated with wolves and dogs.

All over the world Homo Sapiens were travelling with wolves and some proto dogs. It would have taken only two human generations for dogs and wolves to have been completely trusting of man. Natural selection also played a large part in man’s coming together with dogs. When early man had learned to form settlements, wolves and dogs found food on the outskirts. However, only the brave specimens would approach the humans and thus become noticed and start the symbiotic relationship that has lasted until now. The others either remained wild or died out.

Burial sites have been discovered globally that have uncovered the remains of dogs and dogs with humans. Many of these burials have been dated at around the same time that humans experienced a large population growth.

These burials have been found to be ceremonial, with dogs often positioned alongside humans, in the arms of humans or at the feet of humans. A 7000-year-old grave found in Sweden revealed the remains of a dog positioned at the feet of a man. The dog’s neck had been broken, suggesting that it was ritual for a man to be buried with his dog.

Other canine remains dating back as far as 8000 years suggest that injured dogs had been treated, where broken bones had been healed. Even euthanasia happened during these times, with dogs that were lame with arthritis and other illnesses having their necks broken.

Since the domestication process began, man and dog have travelled together. It is because of travel that there are now so many breeds and breed types. Before dogs were split into working categories, they were categorised by the way they looked. Certain parts of the world had dogs that bore resemblances to the Timber Wolf, such as ancestors of the German Shepherd. Other breeds deviated more quickly from the wolf to which they had their ancestry.

Physical traits inherited from ancestors enabled breeds to be recognised by their human companions as useful for certain purposes valuable to their development. It was from this point on that deliberate cross breeding became a normal function of the dog/human relationship. Prior to this, cross breeding was a circumstance of evolution dictated by geography.