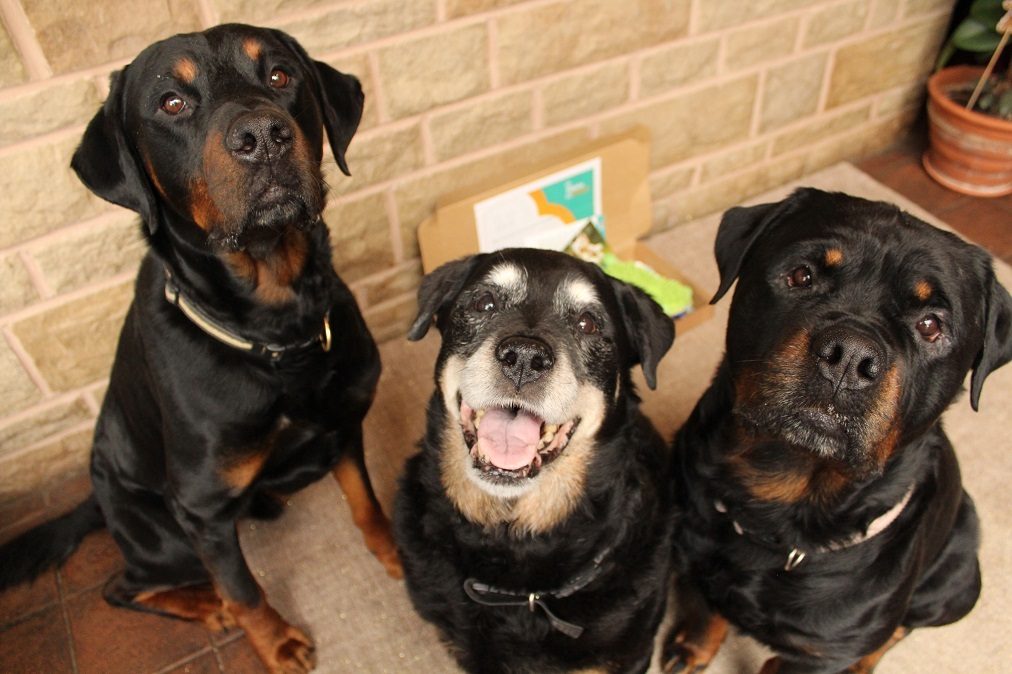 I own three dogs. Of my three dogs, Mia is the most food orientated. There's no debate.

Chris loves toys and if he fears he'll lose his toy by dropping it to get the food being offered, will choose the toy over the treat nine times out of 10. Danny floats between the two, depending on the value he places on the food vs the toy.

We have tried dog subscription boxes but as with all things, new brands launch, existing brands expand and as we haven't seen some for a while, we approached a new Suffolk based company, Nibble and Nosh, who were kind enough to send us their Treat Box (worth £19.95 as a standalone box) for Mia, Chris and Danny to try.

Suffice to say, the dogs were thrilled and when we combined with reviews and opinions on other dog subscription boxes in the UK, they made it onto our 'Best Dog Subscription Boxes 2020' feature.

Nibble and Nosh dog subscription box review in a nutshell:

Review in detail: what everyone liked

I was a big fan of the size and style of the box. It's slim and may fit through some letterboxes and is compact enough that it doesn't take up enormous room while you're working your way through the treats.

There were also personal touches, like the welcome card and I loved the colour of the paper that lined the top of the box. It doesn't run under the treats, because each pack is sealed gently but firmly to the bottom of the box to stop things moving around in transit.

Mia as I've described already is a big foodie. This doesn't always play well with her colitis. She's 14 and at the moment is sadly having a little flair up, so she has been taking it gently diving into the treats (more gently than she'd like) but I'm happy to report that even with her tummy troubles, these treats were all extremely gentle on her digestive system.

They gave her no adverse reactions, which was brilliant. She especially enjoyed all types of the sushi rolls (big and small - the biggest now known as 'hypo-treats' in our house because of their eyes in the photos) and the sweet potato twists which have beef wrapped around.

Danny was immediately torn between the salmon sushi rolls (pictured above) - which were a hit with all three dogs - and the toy.

The toy was removed from the equation to lengthen its life span while we were testing the treats, although it seems quite hardy so far and is still in one piece. Danny can destroy a toy in under 20 minutes with no trouble so it being intact is no mean feat.

Chris, who is not usually such a foodie and sniffs, inspects and rolls new food around in his mouth before deciding to eat (seriously) really enjoyed the chicken and liver fillets and beef and sweet potato twists (both pictured below).

It may be the first time I've seen him try something new and not take it to his laboratory (his bed) for inspection first.

As far as dog subscription boxes go, this one had something for each of my three dogs who range in ages from five to 14. Two weeks in, we still have treats left too.

For £19.95 as a one-off box (or 30% less if you subscribe), I believe it gave them a thrill when it arrived and I opened it up to show a bundle of treats and fun stuff inside. And sometimes that's all you want - something different to try to give them a thrill!

Many thanks to Nibble and Nosh for sending us a box to review. Find out more online at www.nibbleandnosh.co.uk.

If left untreated, fleas can cause serious health implications for dogs which is why is important to treat dogs for fleas regularly and preventatively....

Our dogs love to give their opinion on dog treats, toys, tech and much more. And their feedback is invaluable to us as we...

5 Inspiring Dog Adoption Stories With Before & After Photos

Here are five life-affirming and inspiring dog adoption stories that are guaranteed to bring a smile to your face.

In This Issue... Real Life: How a 10 Pound Chihuahua Saved My Life Talking Point: Why Do Dogs…? Interview: Hacker T. Dog: 'Being a...