Adopting a dog is a hugely rewarding experience. It can be a learning curve, but the same can be said for any new relationship, and as these amazing stories reveal, it’s not just the dogs that benefit from the act of adoption.

Here are five inspirational dog adoption stories to warm your heart and bring a smile to your face.

Long John Silver didn't have the best start in life but is now living his best life with owner Steve Pugh and his pal, Patch.

Silver arrived into the care of Animal Adoption International in the UK from India around three years go after he was rescued from an Indian railway station, where he was found to only have three legs (the fourth had been macheted off). 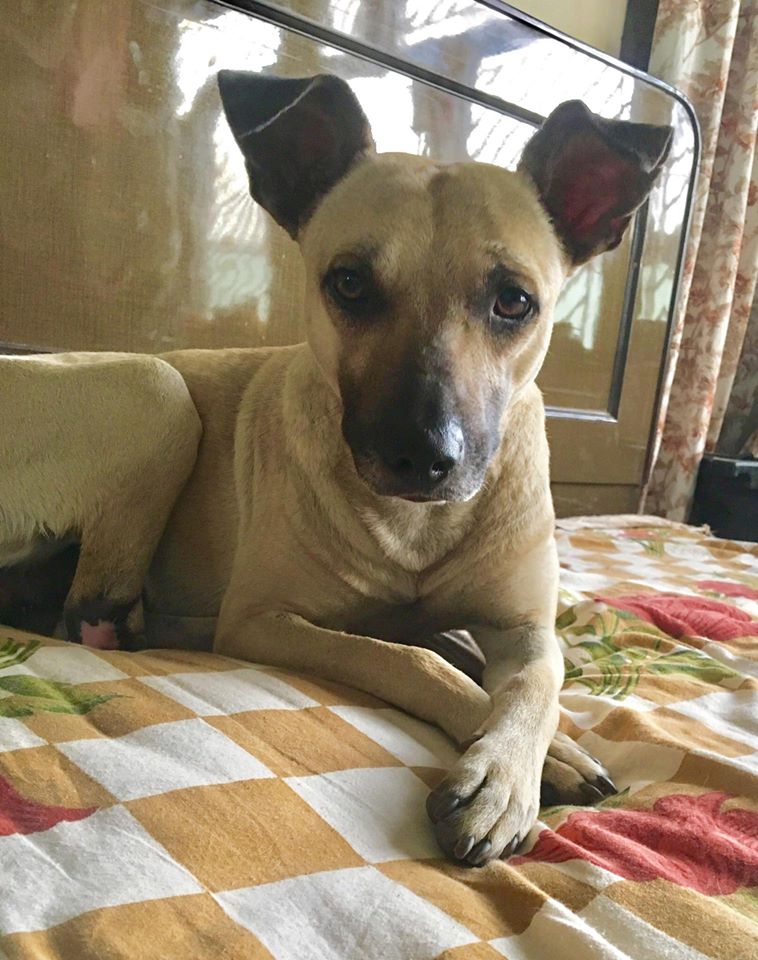 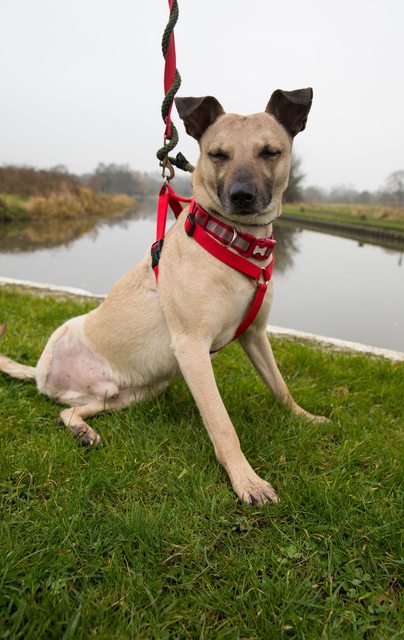 Long John Silver: Before being adopted

The person who spotted him managed to get someone to go and rescue him, and when they got there after driving 300 miles, they found he had a girlfriend and so she was rescued as well.

Long John Silver was spotted by Steve Pugh on the dog adoption website, dogsblog.com and contacted Animal Adoption International to apply to adopt him.

Some years on, he shared the next chapter in Silver’s story with us. 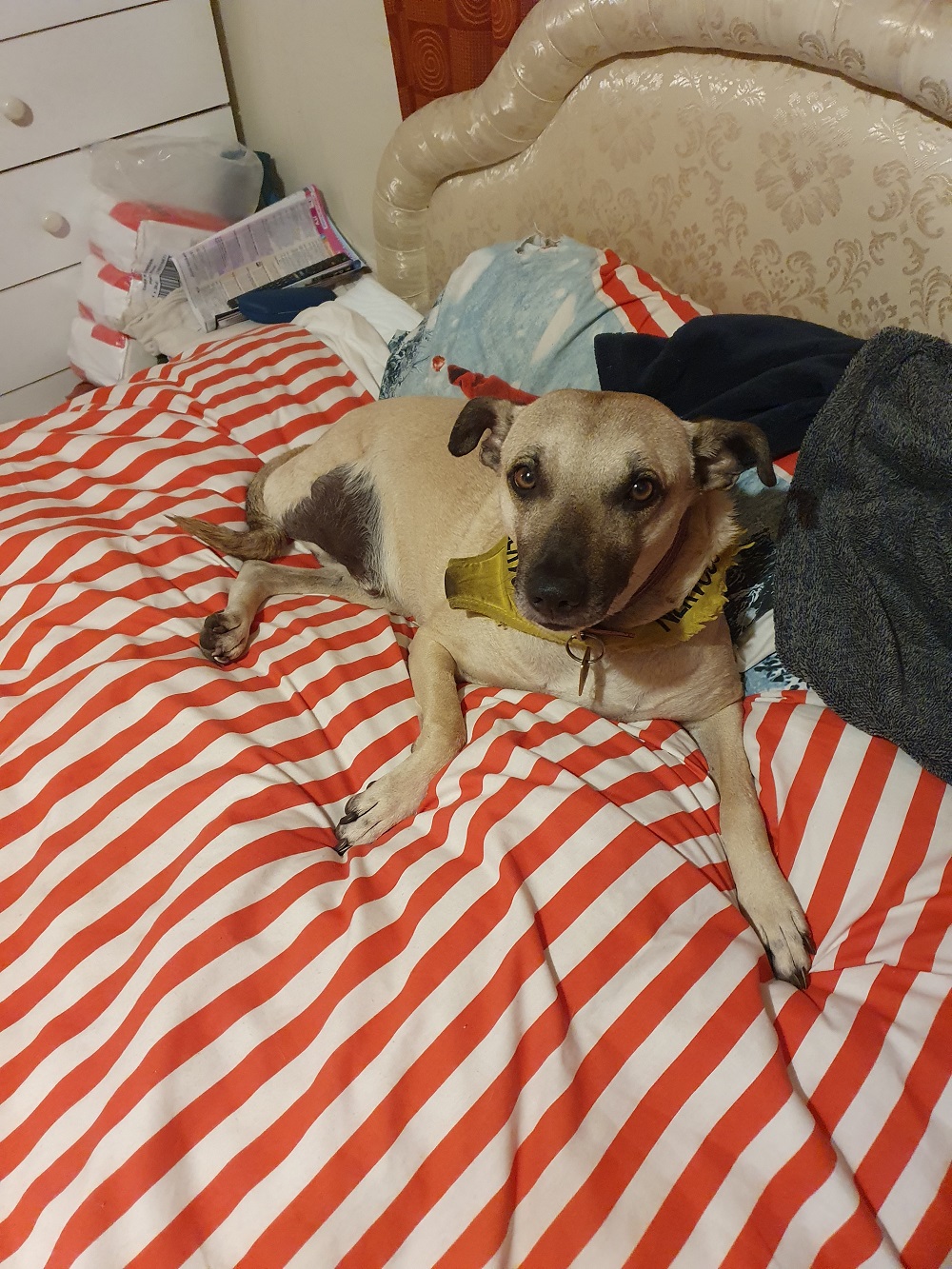 “I am a mentor with “mentorme” for people during their first year of release from prison, so am by nature, I’m a rescuer of wounded people. At the time I saw him online, I was running free breakfasts for dog walkers at my church every Wednesday.

"Instinctively it seemed the right thing to do, to rescue a wounded dog for our group, as the group is close-knit and supportive. There’s an African saying, 'It takes a whole village to bring up a child'. I felt confident that together we would work through his behaviour problems.”

When Steve adopted him two years ago, he believed Silver was suffering from PTSD and is only now starting to recover - noticeable by his evolving cheeky behaviour and sense of humour.

“When I first saw Silver my heart went out to him and knowing that he had been returned by several previous fosterers for his separation barking, which upset neighbours, I was determined that this wouldn’t be repeated with me. But it proved no real problem and within a week of him staying with me, with my other dog Patch for company if I had to go out, he settled down quietly to wait for my return.

This is Long John Silver having someone fun in the park. It’s awesome to see a dog feeling free of worry and enjoying life, isn’t it? ❤️ 📷 Steve Pugh (Silver’s owner) #rescuedogsofinstagram #dogsblog #dogshavingfun #parklife

“I estimate that he is probably approaching four-years-old now. During his first year with me we had dog blessing service for Bristol where each dog received treats/toys and a baptism certificate (without baptising them) about 60 people attended and some owners had several dogs. It stayed amazingly well ordered and was greatly enjoyed by all.

“Adopting Silver has been a fun journey, with his sense of humour causing much laughter or frustration at times. For instance, he escaped from the house once in the early months and ran around the block of six houses with me in pursuit. Him being so much faster than me, by time I returned to the house I found that he had already been back, turned over the rubbish bin, scattered its contents across the room and ran back out. He returned 15 minutes later of his own accord. He also has a lot of fun with Patch.”

Micky spent months in rescue before finding his forever home and it was all thanks to a Valentine’s letter he wrote for dogsblog.com and his rescue, Dogwatch UK, to appeal to his ideal new owner.

Kris Karwowski read Micky’s letter on the MailOnline and admits it was the eyes of this overlooked young rescue dog that first captured his attention. 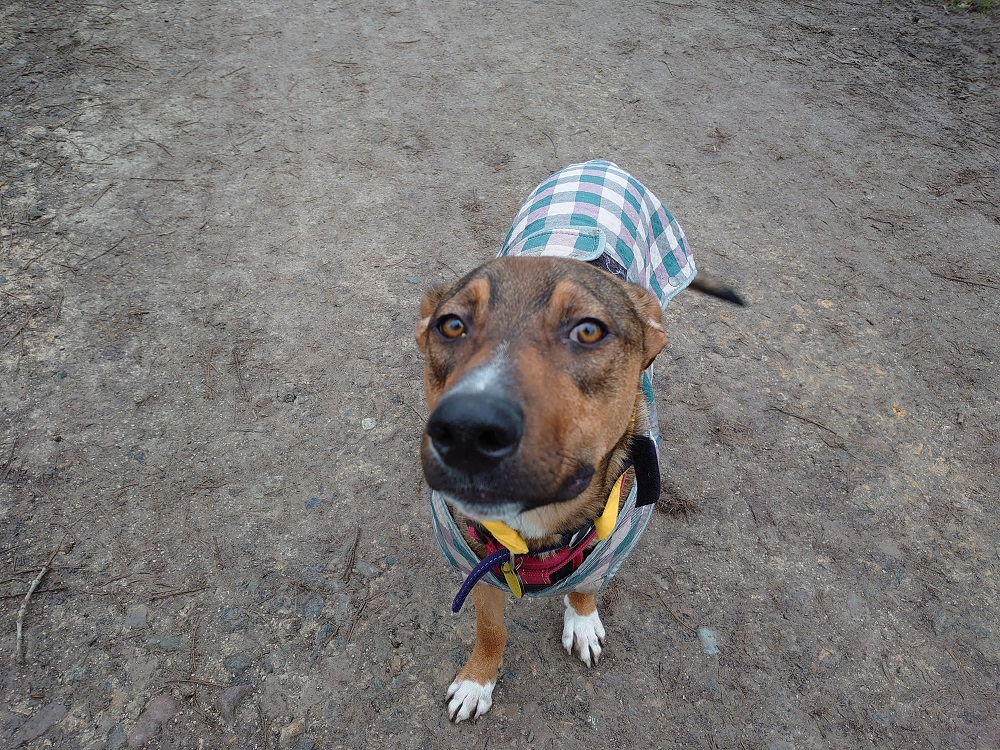 Micky: Before being adopted

"When I first saw Micky's profile it was his eyes and face that drew me to him, the profile spoke of his antics but predominantly I couldn't believe that although he was house and crate-trained, that he hadn't been adopted for so long. His photo showed him as not being that big and I kidded myself he would grow much further as he was nine-months-old when I saw his profile. Turns out that in the photos he was much younger still so when I went to visit him at his foster home he was a fair bit bigger. This made jumping on me and licking my face on first meeting a lot easier.

"Having got past the slobber I saw an extremely playful, mischievous dog with nothing but heart towards the other dogs around him. He had a play/wrestling mate at the time of my first sight of him and together it appeared they intended on reigning complete chaos on their surroundings, which made me laugh so with that and his gorgeous eyes it was a done deal. There was no hint of any mistreatment in his past life.”

Micky has settled into a quieter life than he experienced in his foster home, but has made some great new friends, Kris says. 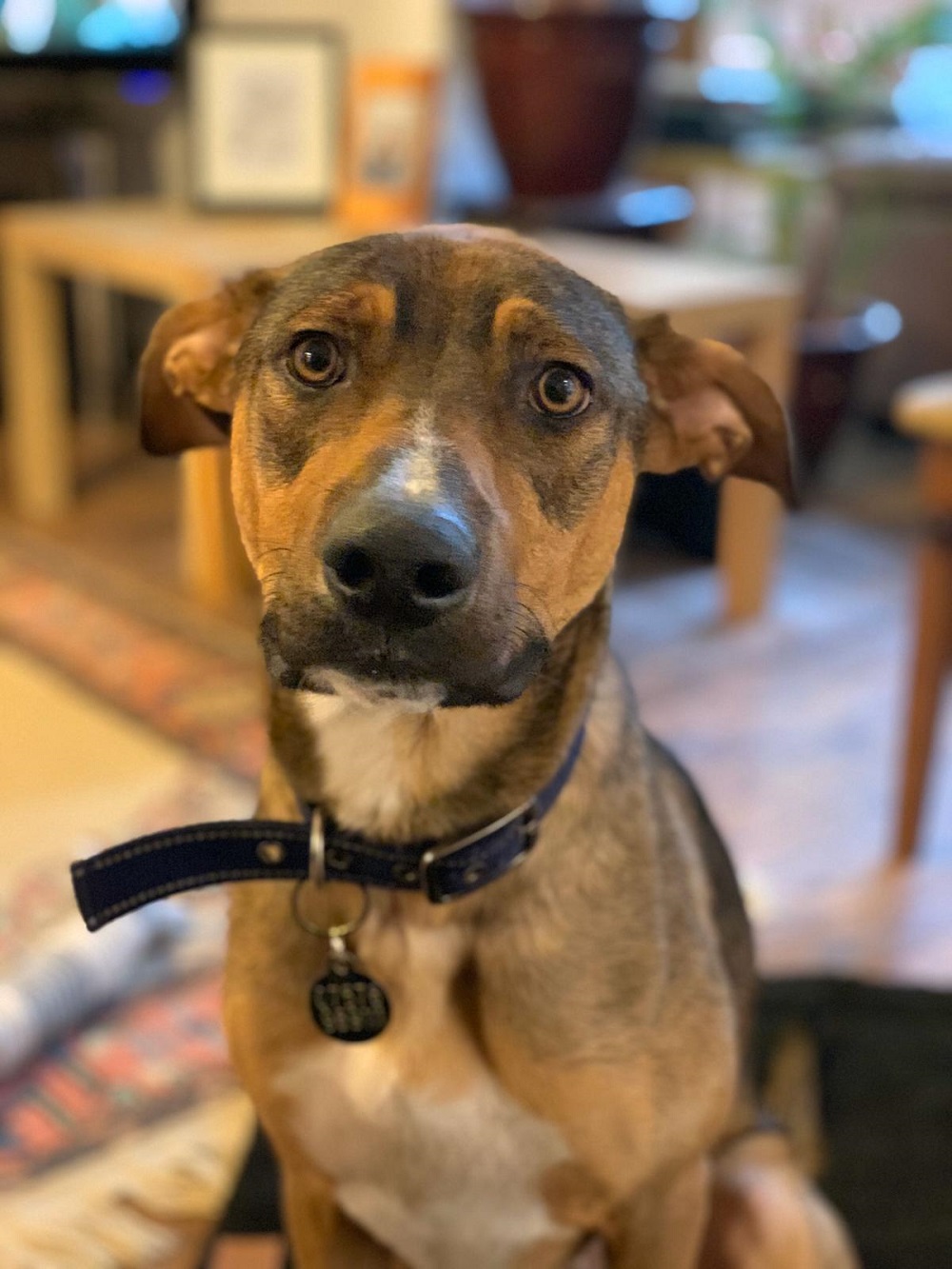 Micky: After finding his forever home

"He has made some great regular friends on walks in the local park as he's such a friendly chappie. He will go up to every dog he can and encourage them to play with him, being a little boisterous it almost always ends up in a giant tussle and chase around for hours on end. He regularly talks to other dogs and people, 'talking' by doing some charming mixed bark howling, frequently causing me and other owners to laugh out loud as it's just so charming.

"Micky's an incredibly social creature and very emotive, sensitive, very curious of everything and just loves sticks, which are his favourite toy when I allow them. He has been absolutely brilliant for me personally because of the walks he gets as we're averaging about eight or 10 miles of walks most days now during lockdown so my exercise has gone from zero to full-on, and a lot of that is him running around like a loon with his friends when he meets them. 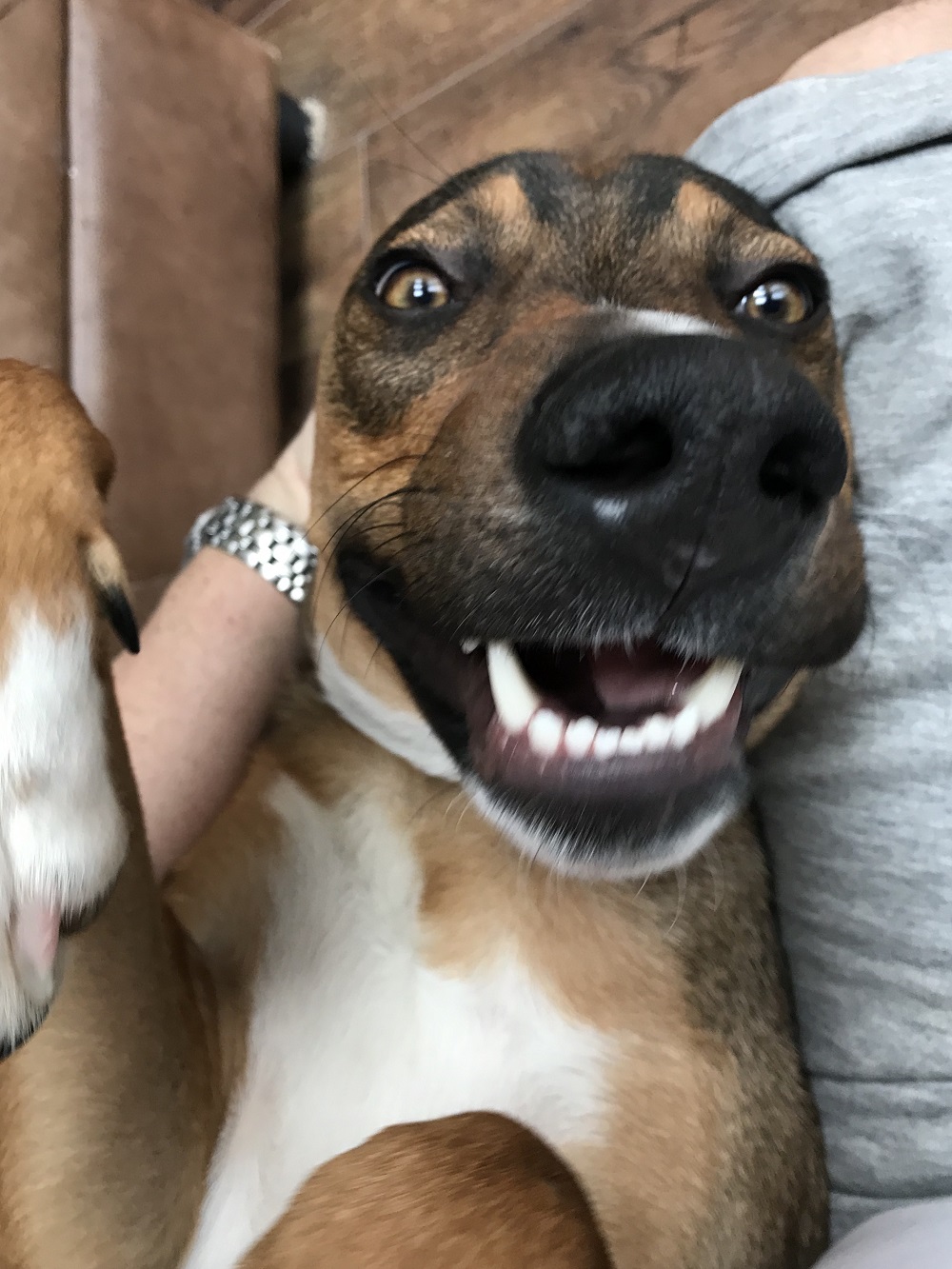 "It's only been two months but he's changed my life for the better for which I'm grateful and I'm looking forward to a long time with him."

Border Collie Joe found his forever home last summer. He wasn’t waiting for long but before finding the perfect home, he had a false start.

Joe: Before being adopted

His rescue, South Coast Rescue says, “Joe was a victim of poor previous owners who lacked his care and socialisation resulting in him needing extra work to bring him out his shell. He just needed to find the right home with a new owner willing to let him settle in.”

Joe now has a PERFECT life! He’s living with an ecologist in Yorkshire in a barge, loving the great outdoors and walks with his owner as a part of his daily job. 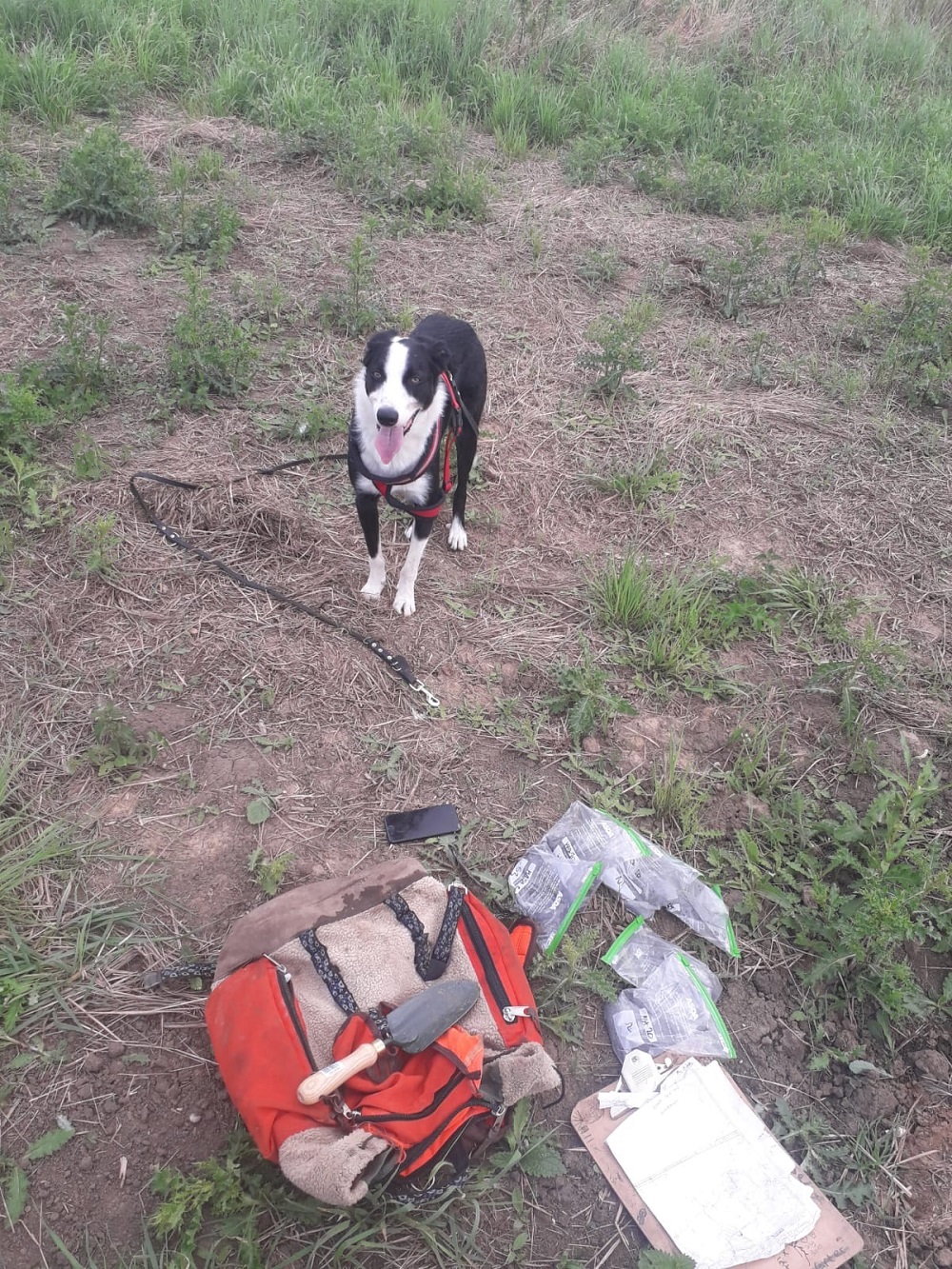 Joe: With his owner at work after finding his forever home

His new owner, Thomas Carrick who first saw Joe on dogsblog.com said, "I simply couldn’t be now without him."

Maxine Hanson has always owned rescue dogs and cats. After moving house, she tells us she and her partner, Phil were looking for a new cat-friendly dog to join their family when they came across a three-legged dog called Boomer, who was in a foster home in the UK after being rescued in Romania. 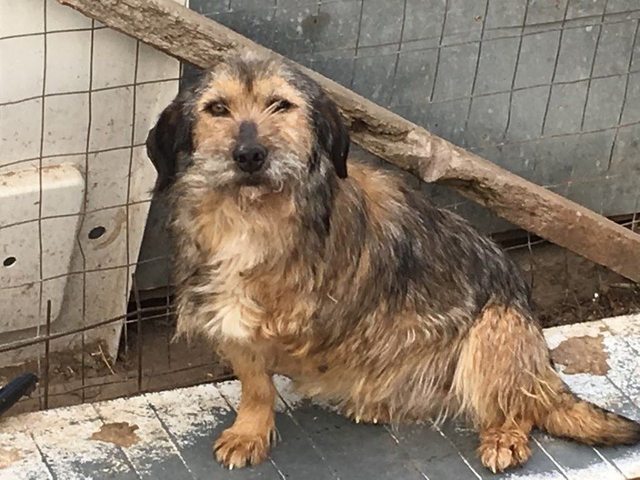 Boomer, now known as Peggy, was on dogsblog.com with Dogs Haven rescue and Maxine tells us she felt an instant connection.

“We were looking for an older dog that we could offer a secure, loving home to in their later years. I was not put off by any disabilities (such as the loss of her limb or vision). Her photo just touched my heart, Phil’s too.

“Her colouring reminded of one of my old dogs who passed away at the grand age of 16, also a rescue.

Peggy settled in quickly and without a lot of fuss and Maxine tells us Peggy is Phil, her partner’s first dog.

“When I first saw Peggy I hoped she would accept us. She came over and said a doggy hello. It was great. Since we brought her home we’ve felt like a family again, we missed having a dog around so much. It’s like she’s always been with us. 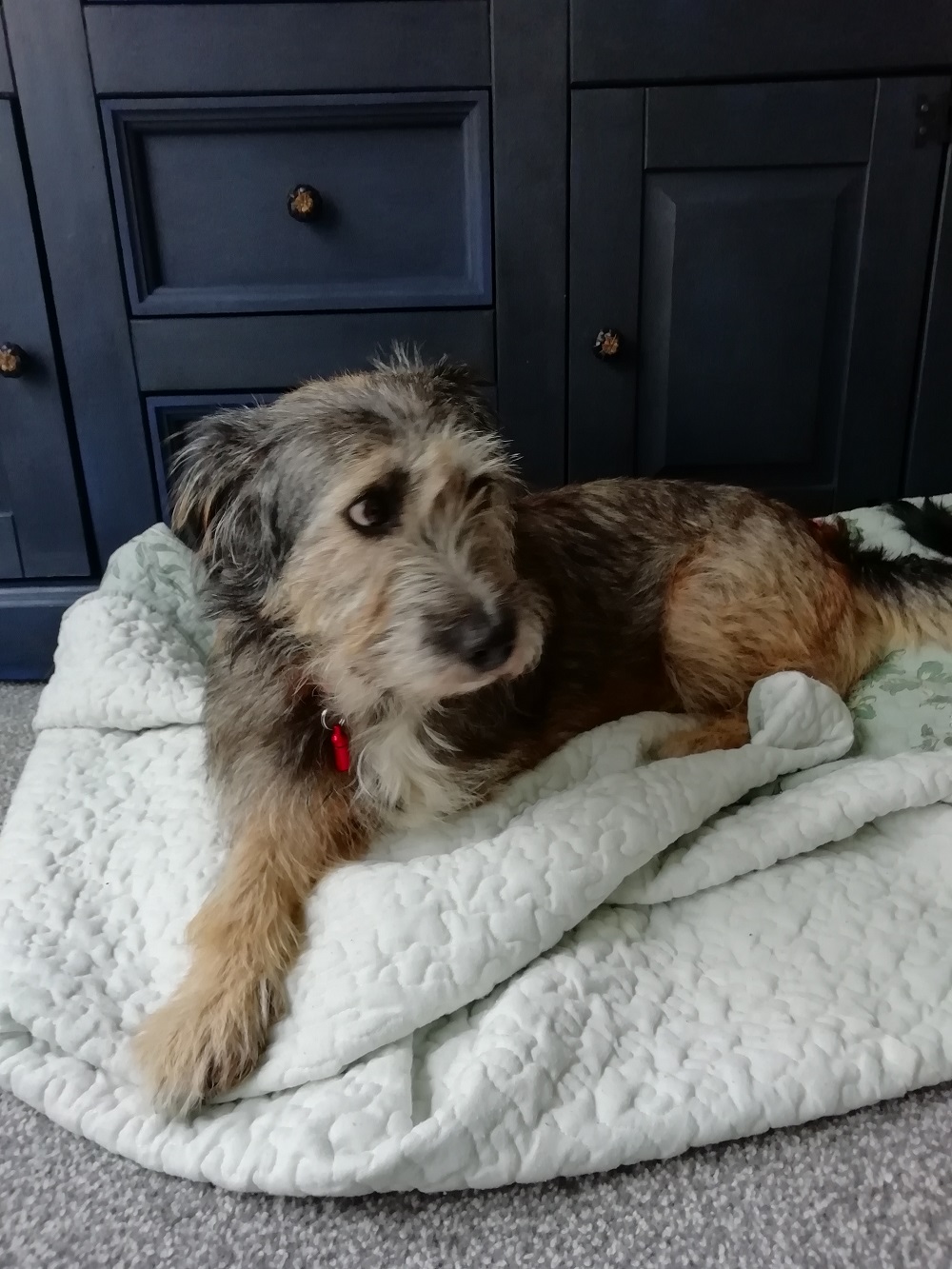 Peggy: After finding her forever home

“Over the last six months I’ve noticed a little stubborn streak in her. Her character is coming through. She sits down if she doesn’t want to go a certain way when we are out walking.

“Adopting Peggy has brought us a lot of enjoyment, and made us minor celebrities in our neighbourhood. People want to talk to the couple with the three-legged dog, Peggy, wanting to know her story!”

After Peggy joined their family, Maxine adopted a second dog from Dogs Haven. Joker, as he was then known, was also in a foster home waiting for a forever home.

Maxine tells us she met Joker, now known as Pippin, when she first went to meet Peggy and was taken by his character but had been discouraged to take him as well as Peggy because he was very nervous. 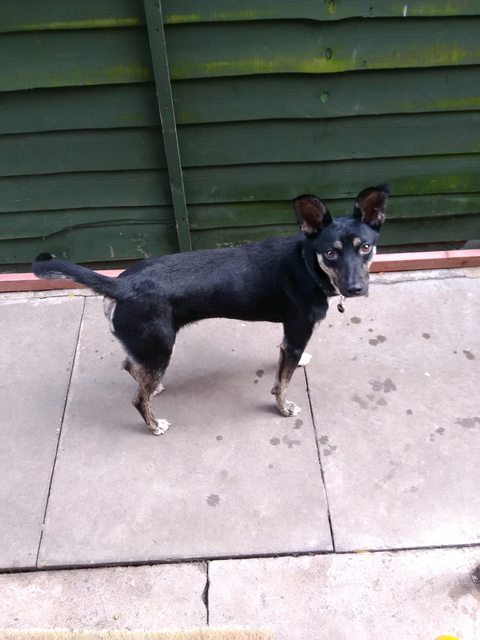 “When I first saw Pippin, it upset me. He looked a small, sad little boy, with plenty of intelligence tucked away. His foster mum had done a great job, but he was so afraid of strangers. It was a relief when she managed to persuade him to come over to me. I just wanted to scoop him up and give him a hug,” said Maxine.

Pippin is still settling into life with Maxine, Phil, Peggy and their cats, Maverick, Bella and Ozzy.

Maxine tells us, “He’s nervous about noises, even the wind, but loves cuddles on the sofa and likes to be in the same room as us. He’s on what we call ‘high alert’ when out walking, always checking behind him, and has to get the first bark in when he sees other dogs, even ones that could easily eat him for breakfast. 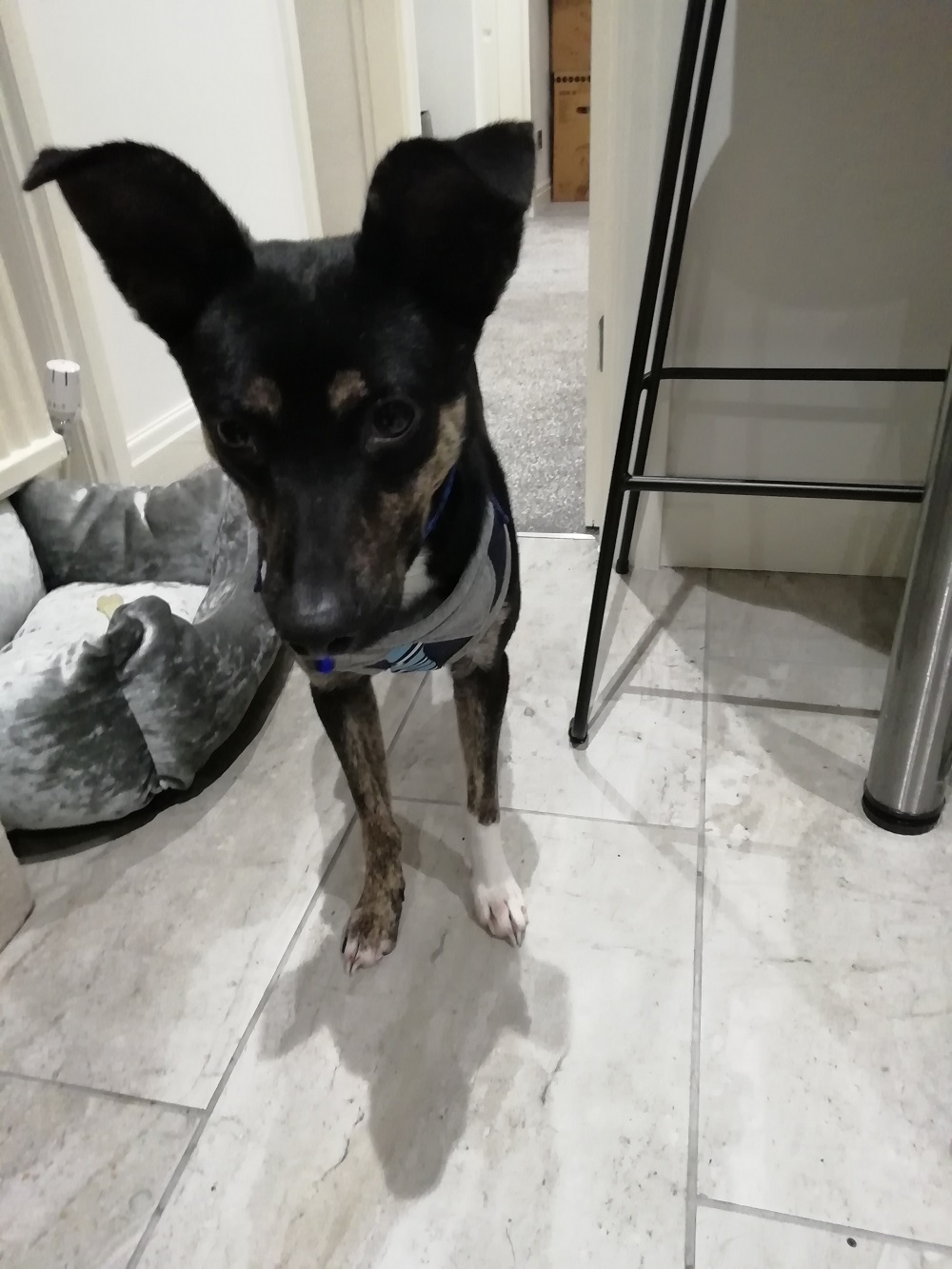 Pippin: Growing in confidence after finding his forever home

“Since we brought him home it’s taken time for him to settle into family life, but he’s such an intelligent little dog. He likes routine, food and company. He even tolerates our three cats.

“Over the last six months, I’ve noticed a loving nature in him. He needs reassurance, is quick to learn, but doesn’t trust strangers. Adopting Pippin has been rewarding. We have seen him come out of his shell, from hiding behind the sofa to asking to get on it and snuggle with us.”

Maxine tells us she has no regrets about going back and asking about Pippin. 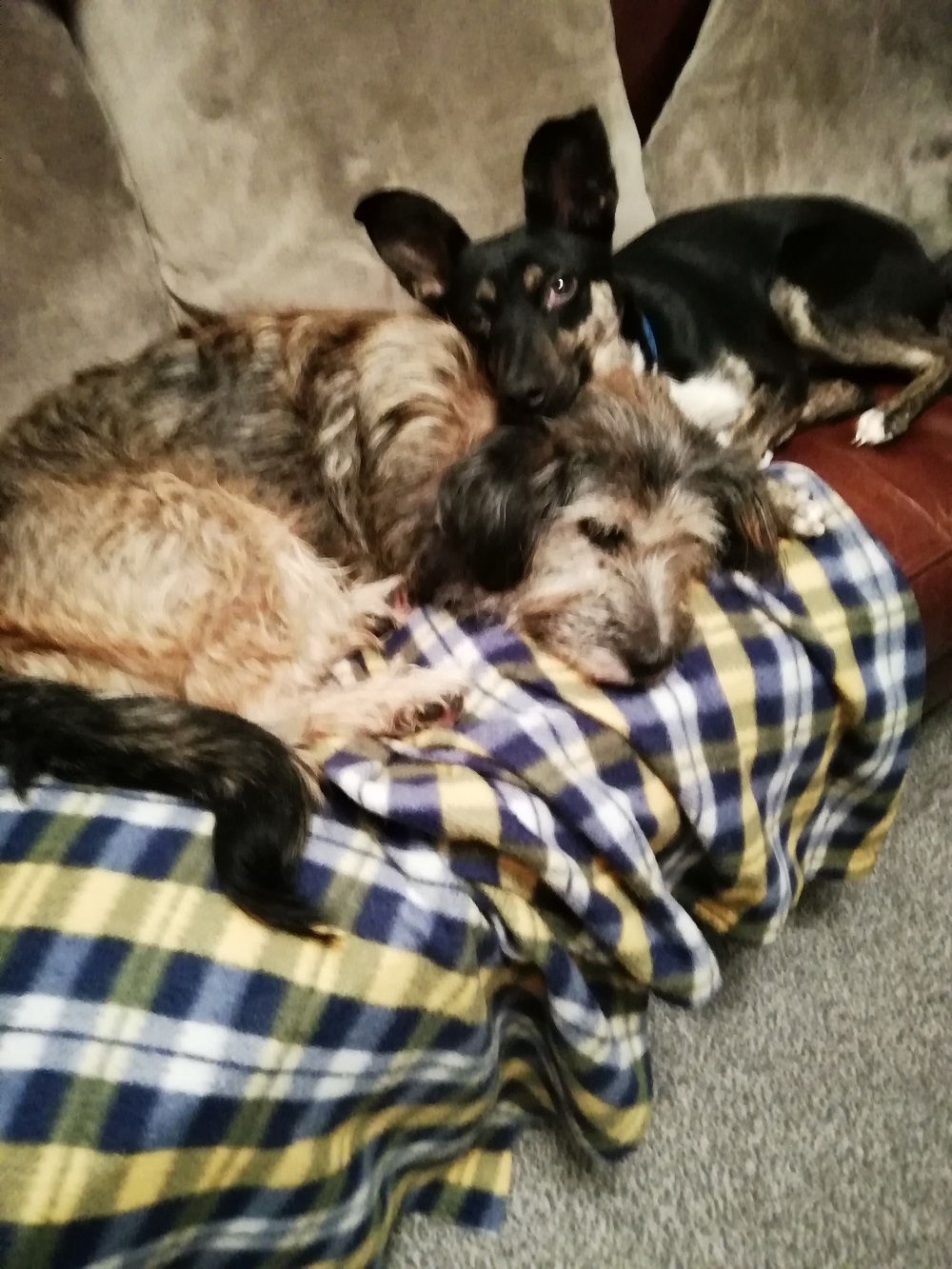 Peggy and Pippin: Sleeping together after finding their forever home together

“Adopting a dog takes commitment, lots of understanding and love. Pippin and Peggy make us laugh, wonder about their past and make plans to do more when things get back to normal – such as trips to the seaside. We can’t wait.”

If you’re thinking about adopting a dog, visit the UK’s largest dog adoption site, dogsblog.com today and search the site to find dogs of all shapes and sizes looking for their forever homes.