As dogs age, sometimes their hearing fades or just becomes more selective. K9 Magazine's Bonnie always heard the sound of a biscuit being unwrapped, yet you could be calling her name while standing right next to her and she'd be none the wiser. But have you ever considered what life is like for a deaf puppy growing, developing and discovering the world with limited access to sound?

Suzanne Williams is a specialist teacher working with deaf children. Last year she adopted Jasper at nine weeks of age. He recently turned one year old and to mark his birthday, and their first year together, Suzanne shares her story with us about the challenges, triumphs and even benefits to raising a deaf pup.

I adopted my deaf Dalmatian boy, Jasper, through the Deaf Dog Network (DDN). His breeder had contacted them for advice and support in finding he and his deaf brother the right home. 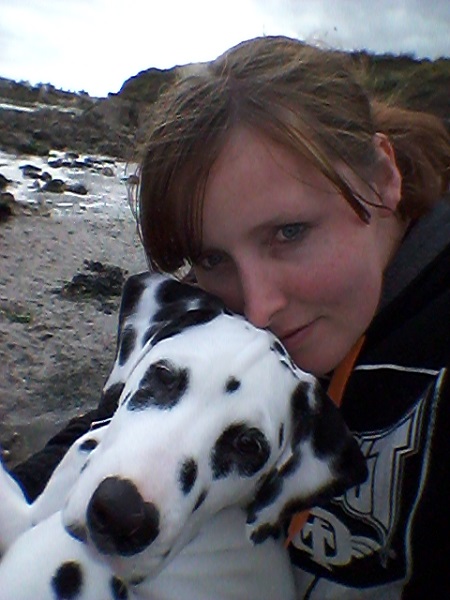 Lauren Minty, a DDN volunteer placed an advert on their Facebook group, I'd lost my faithful Labrador earlier in the year and it had taken months to recover from the sense of loss. I also work with very young deaf children, so as well as thinking that he was extremely cute, I was pretty curious about how deafness would affect dogs and our relationship with them. Coincidentally, he was also born on my birthday so I took that as a sign that he was meant to come live with me. I emailed Lauren, who provided me with lots of information and support (as well as a home check) before putting me in direct contact with Jasper's breeder.

Even at nine weeks old, Jasper was already really well socialised and confident when I brought him home. The first thing he did was use me as a platform to test out a running jump onto the sofa (and it worked!) I had read somewhere that deaf dogs can be jumpy when touched so took every opportunity to get him used to being touched all over, particularly when he was sleepy - to make sure that touch remained a positive experience for him.

However, he had been handled and socialised a lot as a puppy and at no point showed any surprise or fear of being touched. But I was new to having a deaf dog, so wanted to do everything I could to ensure that he would grow into a well adjusted dog.

Having the expertise of over 4000 deaf dog owners and trainers through DDN also increased my confidence as time went by. Many times the advice is the same as for a hearing dog, but you can become a little bit worried that you've done the wrong thing, so even the moral support is really helpful.

Building on his early socialisation, I began training so he could learn the basics. The first thing I taught him was the 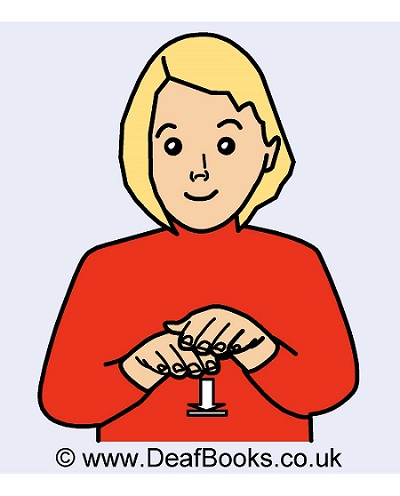 As he was already sitting naturally, as puppies do, all I needed to do was show him the sign and give him a treat every time he did it himself, after a few repetitions he was sitting on command reliably. I thought Labradors were fast learnings but never imagined exactly how smart he would be at such a young age - the treats definitely helped!

He had been crate trained as a puppy so only had two accidents in the house but whenever he 'went' in the garden I used a sign for 'toilet' and gave him a thumbs up and a big smile! Now I sometimes sign 'toilet' to ask him to go outside before bed. He gives me an 'oh do I have to' expression but always goes for his last wee.

Before he'd completed his injections I carried him everywhere with me to give him as many experiences as possible.
We went to the beach, the shops and train station for example, and once he'd completed his injections I let him walk short distances to have a sniff around these places and meet as many dogs and people as possible. He would often take this in his stride and jump back into my arms when he felt less secure, or was getting tired.

Getting advanced: Teaching a deaf dog the recall and to 'lie down'

We began in the same way as you would teach any dog but supplementing the word with my own gesture - lowering my hand to the floor to point downwards then tapping the floor with two fingers - I thought this looked more like his front legs than just pointing down, but it really doesn't matter what sign or gesture you choose as long as you're consistent. He's even started to anticipate 'lie down' by the flicker of my eye downwards, so its not a sign I use very often anymore.

It was still all new to me so I wanted to make sure that Jasper had all of the opportunities that a hearing dog would have, like being able to run freely off lead. While this was all in mind I read an article about letting deaf dogs off leash and how they would need a reliable check in so while we were out walking and Jasper was still very focused on me I began giving him a treat or a thumbs up just for looking at me so he had a positive association. 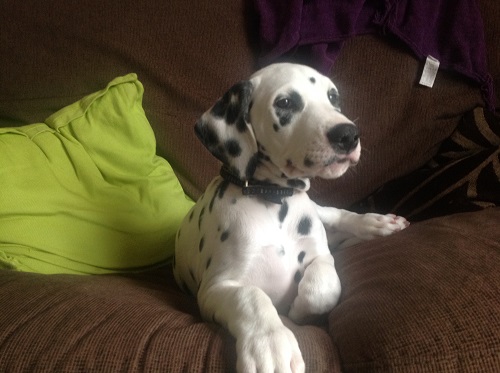 As the months went by I swapped the treats for a thumbs up and also asked him to come back to me sometimes for a treat. This worked really well and if it was an enclosed safe space I let him off lead to practice.

At home if I want his attention (and he isn't already looking - which is unusual, he likes to be visually aware of everyone in any room he's in) I will either make a big movement like a wave, or I will tap his shoulder or his hip to get his attention.

Through my job teaching deaf children I know it's customary for a deaf person to have a sign name, so Jasper's is a letter 'J' drawn in the air. This has been more difficult to teach, with only having one dog - he knows I'm referring to him without needing to be told, so it's also a work in progress.

Recently, he's become a bit of a teenager so I have started using a long line to remind him of his basic recall training. There's nothing like being ignored by a stubborn teenager to remind you that your little puppy is nearing adulthood!
They say teenage dogs go through a selective deafness phase, well deaf dogs do too - only they stare blankly at your hand signals (no idea what you want lady!) or avoid looking at you all together (I can imagine him saying 'if I don't look at her then I'm not technically ignoring her request am I?').

Thankfully he's remembering not to run too far ahead now, every time he turns to check in with me I grin, not only because it means that he can be trusted to stay nearby, but it also creates a bond that can't be matched between the two of us. He doesn't mind that he can't hear me shouting his name, but I feel a sense of security knowing that he checks in regularly with me. 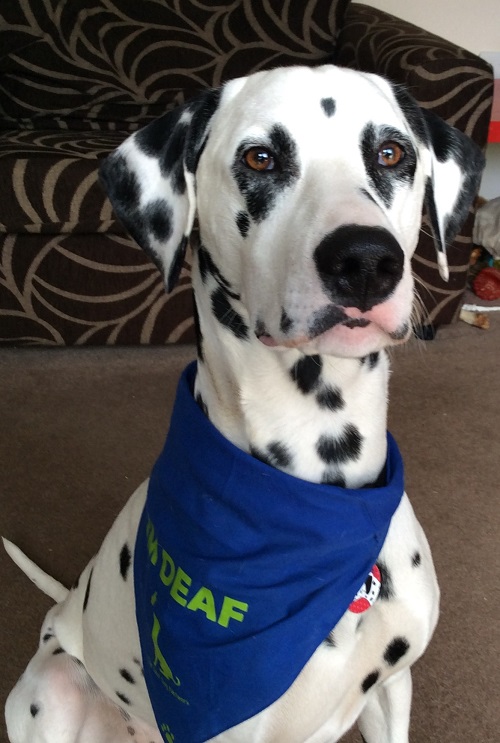 Owning a Dalmatian puppy has been a challenge. Sandwiches have magically disappeared off the kitchen counter, shoes and slippers have been chewed or transported from the cupboard onto window sills (of all places) and he's also now an expert at opening doors so no room is a dog free zone!

But I'm always comforted by the stories of other Dalmatian owners, it's reassuring to know that any issue I have, there are others that have gone through exactly the same with their hearing Dally's and its all part of growing up, regardless of whether they can hear or not.

Jasper is mischievous, full of energy and can be a bit stubborn at times but he's also extremely affectionate, smart as a button, makes me laugh constantly and loves every dog and person he meets! Just your average Dalmatian really! So far owning a deaf dog has been an amazing experience and they also have their benefits, for example he sleeps like a log at night time and doesn't react to dogs barking through fences or in the distance.

To think that he might not have survived puppyhood because of his deafness is something I struggle to understand and that's why I launched the petition online. I wanted to encourage awareness about deaf dogs and to also support the breeders who want to find suitable homes for their deaf dogs and need access to more information and support.

All dogs deserve the opportunity to live a happy life. My life would be a lot less whole (and quite boring!) without Jasper in it. Deaf dogs make great companions, as with hearing dogs - its just about finding a good home and owners that are willing to put in the time and effort to train a sociable dog!