Lilly Ghalichi is possibly best known for two things – her glamourous outlook on everything fashionable, and her beloved dog, Coconut. After launching onto our TV screens through Bravo's "Shahs of Sunset” reality series, Lilly has been the talking point of many news and gossip sites but we've discovered there's a lot more to this glamourous girl.

With lots happening for her in the business world and the continued growth of her celebrity make up and hair classes online at GhalichiGlam.com, Kim O'Meara caught up with Lilly to hear much more about her beloved dog, Coconut.

1. Tell us about your dog - we'd like to know everything about her!

Coconut is an angel. Literally, sent from Heaven. I feel like the luckiest girl in the world because she is mine. She is the most loving, sweet soul I have ever encountered.

She is a Teacup Maltese, and is going to be 6 years old in July. Most people know her as “Coconut Circles” because she does the most adorable left circles. Every one or two steps she takes is followed by a left circle.
(Laughs) The more excited she gets, the more rapid and frequent her left circles get!

I call them “left LOVE circles” because she is a bundle of love, but the reality is Coconut was involved in a traumatic accident as a baby which caused a severe head injury, and she has brain damage as a result. The only visible characteristic of the brain damage is her left love circles. The vet said she doesn’t even realise she does them. She was in a coma for quite some time, and had to re-learn everything once she woke up, from walking to eating. Coconut is a survivor. 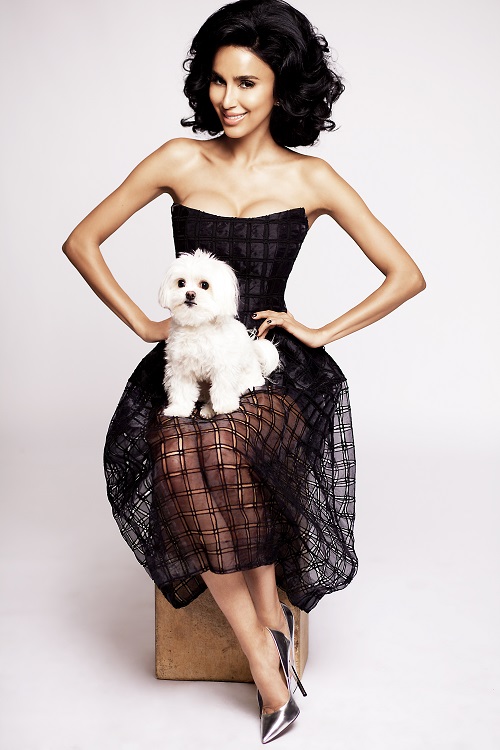 All she wants to do is cuddle, love, get belly rubs, give kisses, and of course eat treats. She has taught me so much about life, and what really matters. To know Coconut, is to love her. Even the most anti-dog people fall in love with Coconut when they meet her.

2. You have over a million Instagram followers and even more on Facebook and Twitter where Coconut features regularly, but Coconut has her own fan base online doesn't she?

Yes, she does! Coconut actually has her own Instagram page, @Coconut_Circles is her handle! She has over 23,000 followers, but I have to admit, she doesn’t post enough. She’s a very private pooch.

3. Lilly, have you and your family always owned dogs?

No, I have never owned a dog before, Coconut is my first. Growing up, we weren’t really allowed to have pets, especially a dog. My parents are immigrants from Iran, and in the Middle East, people do not have dogs as pets, period. Perhaps you will have a guard dog out in the yard, but never as a member of the family that comes inside the way we do in America.

In law school, my next door neighbour had a dog, the exact type and breed Coconut is. I fell in love with the dog and used to knock on the neighbours door to ask if I could baby sit (laughs). Once I graduated, my then boyfriend got so sick of me talking about the dog and how much I wanted one, he told me to leave the house and not come back until I had one. So, I did just that and came home with Coconut!

4. Some of our readers will best remember you for your time on Bravo's "Shahs of Sunset”. How do you look back on your time on the show?

Being on Shahs is an experience I will never forget. To be on a reality show on a national network as big as Bravo is isn’t easy. The entire world is watching, and judging you. It’s a very emotionally tolling experience, and difficult to handle, especially when you’re on an ensemble cast where fighting and drama is encouraged. I will forever cherish my time and experiences on the show, but am so happy to no longer be doing it!

5. Would you ever consider doing another reality show? If so, which one?

I would never say never, but it would have to be the right show for me to consider it. I have a real life outside of the show, a very busy real life. I run multiple businesses and don’t have time for drama, or to be in an emotional state. If a show came along that had a positive message, and didn’t involve a lot of drama and fighting, I would consider it. As far as another ensemble Shahs type show, not a chance. 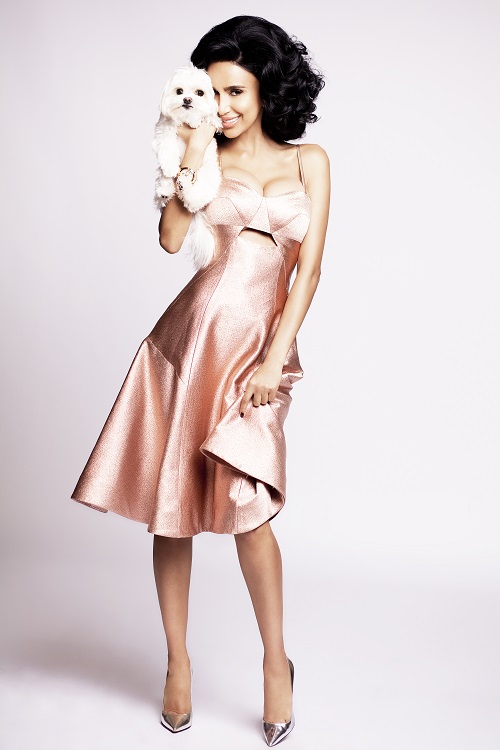 6. Before you were cast on the show you were pursuing a career in law before you chose the path of fashion and beauty launching a swimwear line and a lashes line, “Lilly's Lashes”. Your brands have a celebrity following (Kylie Jenner for one) who has been seen wearing your lashes. Your experience in law must help you navigate the business waters. Do you think this is a side of you that perhaps isn't always seen?

100%. Unfortunately, when you’re on a reality show, hundreds of hours of your life are edited down to a mere three minute segment. That three minutes is edited to show the most exaggerated, ridiculous version of “you”. Often times, that version of you is not “you” but rather a caricature version of yourself.

My image on Shahs was of a spoiled rich girl that only cared about her hair and makeup, that couldn’t be further from the truth. I am a lawyer, and an entrepreneur that has launched over eight successful businesses. My life is far from easy. I work 12 hour days on a regular basis, and there is no such thing as a day off.

Being a lawyer has helped me tremendously in my journey as an entrepreneur. Aside from the obvious of being able to handle my own contracts for example, obtaining my law degree and becoming a licensed attorney instilled a certain level of confidence in me. A sort of “if I can do that, I can do anything”.

Education is never a waste of time, or a waste of money. I encourage anyone that has the opportunity to obtain one to do it.

7. Being your own boss must mean Coconut can travel with you if you're out of town. Where do you think is the most pet friendly place you've visited?

Coconut loves to travel! She was born in Texas, but has already been to Austin, Dallas, Las Vegas, Los Angeles, San Diego, San Francisco and New York to name a few.

But the most pet friendly place has to be her home, West Hollywood. There isn’t a restaurant or store in town that doesn’t have a doggy bowl outside, or treats by the register inside. She convinced me to live here.

9. Do you have a motto that you live your life by? What would you say Coconut's motto might be?

My motto is to stop worrying about what everyone else is doing, and do what makes you happy instead. If you live your life trying to compete with others, you’ll never be satisfied with your life. If you simply ignore outside noise, and do whatever you want, wear whatever you want, go wherever you think is neat, you’ll be so much happier and stress free in life.

Coconut's motto is eat, sleep, cuddle. I think I should start to live more like hers!

10. If you were to swap roles with Coconut for a day, how do you think she'd cope being you and what would you love most about being her?

Coconut is way too innocent to be me. She loves and trusts everyone, and she wants to cuddle and be friends with everyone that walks through the door. She has never seen harm, so she doesn’t know it exists. I work in a big bad world, where everyone is trying to take advantage of me, cheat me, steal from me, or take advantage of me in some way, shape or form. I have to be a Bulldog, not a Teacup Maltese.

I on the other hand would love to live a day in her shoes. I can’t even imagine what it’s like to sleep until noon and then get a massage when I wake up! 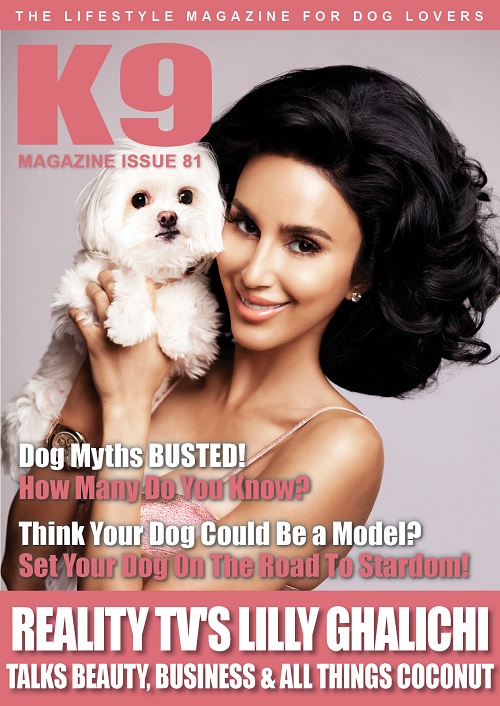 11. For this question, we ask our celebs to match up the following people’s personality to a breed of dog, for example, Winston Churchill = Bulldog or Jennifer Lopez = Afghan Hound etc. If the following celebrities and dog lovers were breeds of dogs, based on their personalities alone, what type of breed do you think they'd be...

12. Lilly, here are our quick fire questions, are you ready? Which do you prefer and why?

Big dogs or little dogs – Little dogs. Less slober!
Pedigree dogs or cross-breeds – Cross breeds. Mutts are so beautiful!
Days off or days at work –Work, I love to work.

13. Describe the last time you laughed out loud because of something you saw Coconut or another dog do.

Coconut has this one toy, or slipper I should say, my Hello Kitty house slipper to be exact, and anytime she gets a hold of it she humps it (laughs). It is the funniest thing, she's so tiny and the slipper is so big, but she mounts it and literally goes at it. Anyone around who sees her doing it just dies with laughter.

Be with my family, friends, and Coconut. I truly enjoy doing nothing. Just laying around talking with the people I love. My life is go-go-go, it never stops so when I have a free moment, I like to cherish it by doing absolutely nothing.

15. Let us in on some of the secrets of your handbag. What five items do you never leave home without?

16. If you were arranging a girly spa break and could invite anyone from any era, past or present, which three people would you invite and why?

Wow, okay well I'd invite Madonna, Beyonce and Marylin Monroe because just how dope would that girl group be.

17. What is your current favourite…?

TV show – I don’t watch TV, I literally haven’t turned one on in over a decade. I didn’t even watch my own TV show episodes (laughs).
Album – I love music and fell in love with Sam Smith’s most recent album. He’s everything.
Film – The last movie I watched that really left an impact of “wow” was “Taken”. It takes a lot for a movie to wow me.

18. If you had to choose just one, what beauty product has most changed your life do you think and why?

I would have to say the beauty blender. It has literally changed the world of makeup and how we apply it. 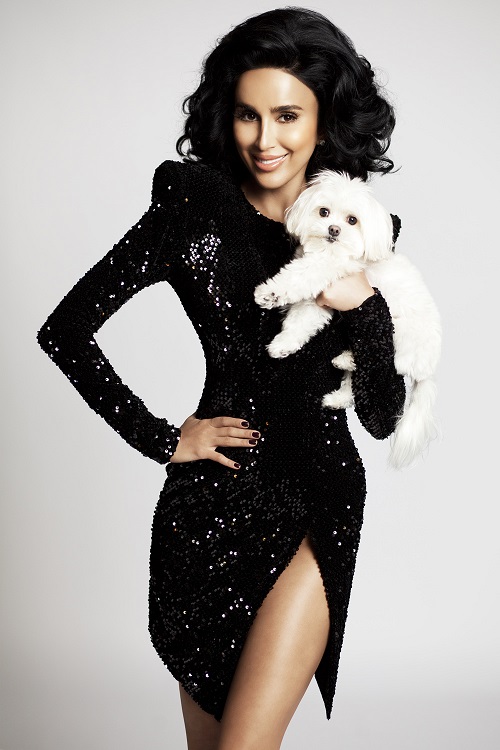 19. Tell us something no one else knows about you.

I’ve only had two boyfriends in my entire life, but I was with the first for 12 years!

20. If you could sum it up, what do you think is the best thing about being a dog owner?

Having unconditional love and loyalty from a soul. I’m not sure if humans are capable of that.

21. Finish the following sentence, my dog is...everything to me.

22. And finally, this is always a tough question and often requires a fair degree of thinking time but….If Coconut had the ability to speak and you could ask her one question and one question only, what would you ask her and what do you think that she would say?

I would ask her what I could do to make her life a happy one. She has truly brought me so much joy and happiness in life, I would do anything to return the favour.

I think her answer would be “a rotisserie chicken”.

Lilly was speaking with Kim O'Meara