With weather typical of the great British Winter in full swing who could blame you if you were ready for some sun, but as dog owners do you ever feel that a holiday abroad is out of reach?

At the end of last year we brought you the tale of Emma and Paul Burton who set off on a European adventure with their two dogs, Ozwena and Uluru (known to their friends as Oz and Roo).

As the Burton family adventure continues, Emma lets us in on where their trip of a lifetime has taken them since Christmas recalling the highs and lows along the way. 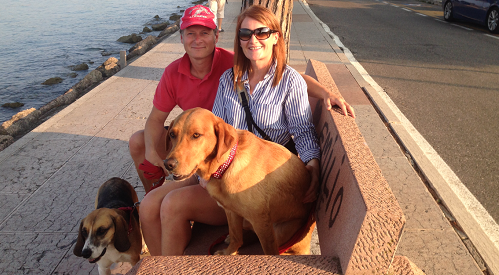 I hope you all enjoyed reading about our trip in December's edition of K9 Magazine and are ready for an update. We are currently in Portugal on the southern coast close to Albufeira in a beautiful place called Falesia. I must admit it is nice to have some sunshine and warmth at this time of year. My husband, Paul and I, are both from the North East of England and at this time of year we’re usually faced with bitter cold winds and minus temperatures.

In Part Two of our story I wanted to give you all a little more insight into our trip and to tell you more about our exciting tails! In particular what Oz and Roo have been up to as well as giving you the benefit of our experience with you some of the needs, requirements and things to know before bringing your dog into Europe from the UK should our story grab you enough and make you want to follow in our footsteps. 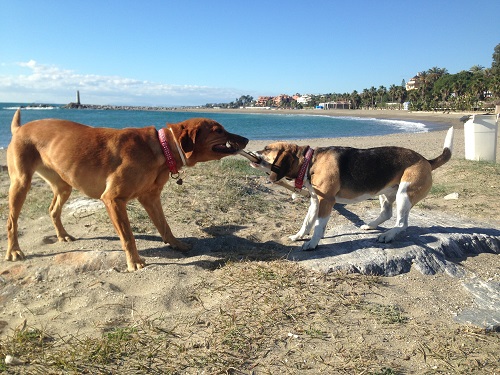 We seem to have learnt the hard way and have come up against a few things that we wish we had known about before we set off. Firstly, you will know all dogs need pet passports and these are easily obtained from your vet at a cost of around £30. We are six months into our trip and have crossed around 12 borders without having to produce these but they are tucked away for when we do need them. Before we return to the UK and leave mainland Europe we will need to take the dogs for a vet check where they are given a tape worm tablet. My advice would be to ask your vet for advice and further guidance, as we haven’t actually done this part yet. More details can be found online here

Secondly I wanted to mention ticks and our problems with these! Those of you who have had the unfortunate task of removing ticks from a dog will be able to relate to this. Our time in Germany was mostly spent inspecting our Oz and Roo and then debating who’s turn it was next to remove these ghastly creatures. Ticks seem to attach themselves to the dogs skin burying their heads deep into the tissue to find blood to live on and left alone will stay there until a human removes them or they get so big they drop off detaching themselves from the dogs skin.

Whilst in Germany our two dogs had a huge ongoing infestation of ticks which multiplied day on day resulting in us having to inspect their coats every day and remove the unwanted creatures with a tick remover or tweezers which I had luckily brought from home.

The woods and parks we walked in Germany must have been riddled with ticks and we heard about this being due to milder Winters and the concentrated amount of deer in the area where woods, grass and open land are. These are more active between April to October but the locals we spoke to suggested we take precautions all year round.

One day on inspecting Oz I found 12 ticks on her body and one had very kindly set up home in a very tender spot her on her anus. It was very large and was obviously causing her some discomfort when walking and sitting and after several attempts I managed to pluck this out using my tweezers and followed this by giving her some tasty treats to help ease the burden of her traumatic tick removal experience. 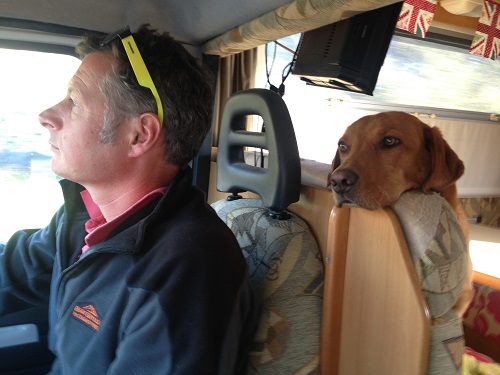 The next thing to be aware of are fleas! Our two dogs caught fleas and living in a motor home can be cramped at times so the uninvited arrival of these trillions of intruders was very unwelcome. I discovered Roo had fleas whilst sitting in a café on one of the side streets in Turin sipping my café latte whilst she sat by my side as she likes to do in case of the chance of being lucky enough to receive a tasty treat. I rested my hand on her head and rubbed her gently noticing that her skin felt gritty. On closer inspection of her head I could see small black bead like creatures jumping and running all over her head, up her nose, in her eyes - everywhere! I left the café immediately and back at the van for closer inspection. I imagine you are all starting to itch now…myself included!

What at first looked like sand and grit on her body as I parted her fur it was soon confirmed that she was head to tail covered in fleas. All of her skin was covered in eggs and the fleas were quite visible often jumping from her and landing on my hand.

There was nothing else for it but to de-flea immediately which took place on both dogs and our van, oh and on Paul and I too! We literally fumigated the whole motor home from top to bottom and a very helpful local vet recommended a flea treatment to use which was in fact the same one we use at home. I must add here that both dogs had already been treated with this before leaving the UK. After this application and cleanse of the van I felt a little more settled until realising that the treatment had little or no affect on killing these little critters. Luckily I had another other sachet so used this again on both dogs and spent the rest of the day painstakingly brushing the dog’s fur and removing the eggs. This was however a very therapeutic exercise, a satisfying activity that resulted in the successful deletion of these fleas!

Lastly on the creepy crawly front is to tell you about Leishmaniasis disease which is caused by sand flies and can be fatal to dogs if they contract the disease. If you go to Europe with your dog you must invest in a collar to prevent this disease. The advice we sought from our vet in Almerimar in Spain recommended the Scalibor collar and these were £30 each lasting for six months at a time. Most of the dogs we’ve seen in Europe wear these collars and I wasn’t aware of this disease until arriving in Spain where it is most common.

On the plus side both Oz and Roo have survived to tell the tail and are fully recovered from the flea and tick incidents they encountered. They both had a brilliant Christmas in Spain and were definitely part of the celebrations where we dined at the local restaurant called the “Stumble Inn” on the harbour front in Almerimar. Oz in particular was a great help in the clearing up process managing to devour all of the food that had been dropped under tables and she did a sterling job making the place look like new after devouring the entire contents of scraps on the floor. 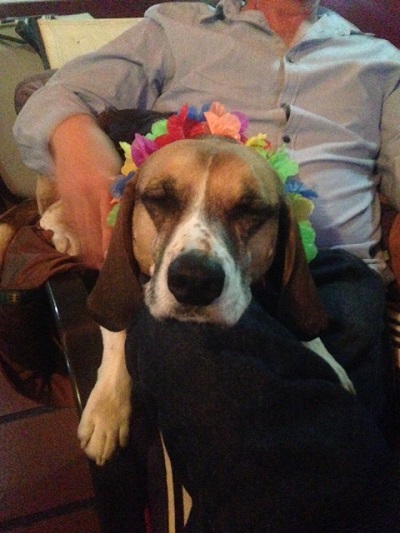 Ozzie, celebrating at Christmas, worn out from all the fun

With a heavy heart we left Almerimar and said our farewells to those who we had made friends with. Travelling has many ups and downs and saying goodbye is always difficult. We drove west along the coast and stopping off at Olvera which was situated at the start of the Vias Verde cycle route taking you through old railway tracks and had an array of amazing vistas across the valleys. Both dogs enjoyed their time there and we walked early evening and ran early morning just as the sun was going down and up, a beautiful place if you ever get the chance to go. This was an unexpected high on our trip and followed by a trip to Puerto Banus where we sat on the harbour, with both dogs enjoying basking in the sunshine and us seeing how the other half live. 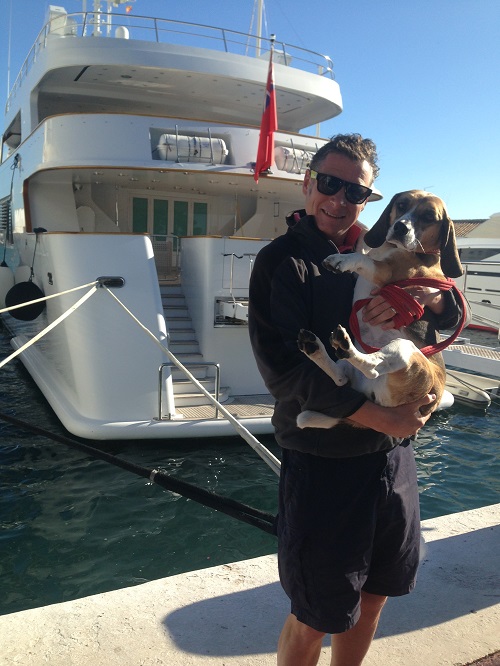 Paul and Ozzie, pictured at the harbour in Puerto Banus

Our plan from here is to head along the Algarve and up through Portugal to Northern Spain stopping off at Vigo and The Guggenheim in Bilbao, Pamplona, Andorra then France. Many more miles and tails to come.

Keep up to date with the adventures of the Burtons on twitter @BeagleBurton where you can also find out more about their new book ‘Dust’ in the coming months.