Kristin Bauer is best known for playing the role of Pam in HBO’s hit vampire series True Blood. An avid reader and thinker, Kristin’s insight into animal rights and human responsibilities are fascinating. She’s from an animal loving family and we think this informs her passionate views on dog ownership. Kim O'Meara caught up with Kristin for an intriguing chat about life as a high profile, responsible dog owner.

Tell us about your dogs. Names, breeds, ages and everything about them.

Well, we have Asher, my boy, he's around 5 years old and is a Rottweiler mix, he's black and tan but mixed with something else because he's quite small.

We also have Oz, short for Osmond. We got him at 2 years old from the pound. He's a Labrador with the coolest looking eyes.

He was once the third dog in the gang. Right now I have the smallest crowd I've probably ever had, we've just had two older animals pass away which is always tough. 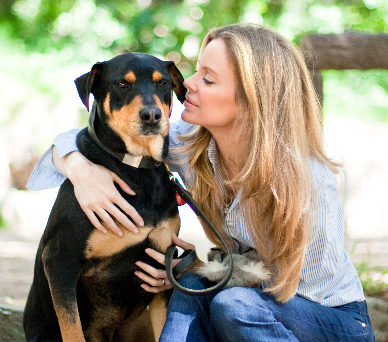 When did your interest in pets begin and how long have you been a pet owner?

Through the years we've had a Beagle, a Pointer, a list of Labradors and we've always had cats. When I was at college in my freshman year I had a cat which I took into the dorm, although it wasn't allowed.

The first dog that I got, my girlfriend was a receptionist at a veterinary surgery and I'd stopped by for lunch one day and there was this dog in a cage there. She was about a year old and as soon as I saw her, her eyes haunted me, I just fell in love.

She'd been left by her owner that day and the vet wasn't hopeful they'd come back. I asked the vet if she could come into my home, I'd take care of her and he told me if the owner came back, I'd have to give her back. I knew I wouldn't be able to, but her owners didn't come back for her until years later.

I also had a Rottweiler puppy, I was in LA and it was for sale. This mean looking guy pulled up and was on the pavement. I just ran up, paid and bought the puppy. I couldn't bear to think he'd go to the wrong home – that said, I'm now much more aware and wouldn't buy again from that sort of situation having seen so many puppy mills.

I'd always encourage people to visit their local shelter and rescue, there's so many animals there looking for new homes.

Our readers will know you for your most recent role in True Blood, what do you love most about your character, Pam? You've just filmed the season finale in the US – how would you best describe the finale?

My character is pretty deep, I find her fascinating. She's very much one of the hounds, she's very cool and I love her sarcastic nature. I just love that fashionista diva!

In the finale, my character's loyalty to Eric is tested and you get to find out a little more about what makes her tick, everyone's characters are explored deeper and I really think fans will enjoy it.

Do you have a motto that you live your life by?

I think I'm figuring things out more and more, things get clarified the longer I stick around! I feel like 'free will and choice' is very important to me. Everything from the issues around genetically modified foods to animal rights. Animals only have so much choice, so I feel like we should make the best choices for them.

Really though I think my motto probably overall is 'be part of life'.

I think if Asher and Oz were to have mottos, Asher's would be more sentimental and all about life, he'd probably say 'buck up dude!', Oz's would probably be more about playing!

If you were to swap roles with your dog for a day, how do you think they'd cope being you and what would you most love about being them?

Oh boy I would love to swap with both of them! I'm guessing I'd still be me but in their body? It'd be really fun to look out of their eyes and see what they see.

I think I'd be very happy I have to say and we'd probably appreciate eachother more. I think it'd be so much fun to be Oz, he's a really fun dog. Asher's much more of a thinker at times.

That all said – the food would be the deal breaker! They do eat well though, I give them things like free range foods and cooked beef burgers, vegetables and brown rice.

For this question, we ask our celebs to match up the following people’s personality to a breed of dog, for example, Winston Churchill = Bulldog or J.Lo = Afghan Hound, Frank Bruno = Boxer.

Oprah Winfrey – I think she'd have to be a Cocker Spaniel. Some dogs just look like their owners, don't they!

Charlie Sheen – I think he'd be a chocolate Labrador. He's a sweet, complicated sort of a fellow.

Gwen Stefani – She'd have to be something very stylish and very sexy. I'd say a white Standard Poodle, maybe a cross. As a breed, they're very smart and so intelligent aswell as beautiful.

Big dogs or little dogs – Really I always sort of spot the big guys and really love the concept of the gentle giant. I always fall for the big dogs.

Pedigree dogs or x breeds – I have to say I'm partial to mutts for a few reasons. First I've been there and done the pure breed things. Secondly health issues seem to be less prominent in mutts and I think anything we can do which helps them live longer, has to be a great thing. I love guessing the breeds in mutts and the whole mutt concept!

Describe the last time you...

Laughed out loud because of something you saw a dog do – Oz makes us laugh all the time. I've got a video of him making us laugh playing with his squeaky toy. He's such a character!

Firstly I'd invite John Wayne, I really love him and he fascinates me. Secondly, well I'd have to say John Singer Sargent, the famous American painter. I love pioneers, people who do things first, so with that in mind - thirdly I'd have to invite Thomas Jefferson. I'd love to find out more about what politics were really like in his day and how much truth there is around what we're told nowadays.

TV show – I love cable TV, I'm a big fan of shows like Justified and Whale Wars. I could watch that for hours!

Book – East of Eden by John Steinbeck is a favourite of mine just now. I also really enjoy another of his books, Grapes of Wrath.

Album – Well, my husband’s albums are always a favourite! I have clips of songs and videos on my site - www.kristinbauer.com where people can have a listen and visit his site.

I think it's like a natural anti-depressant, with dogs around you're happier. They love unconditionally, they don't care how work is going or how busy things might be, they just give their love with no strings attached.

Finish the following sentence, my dogs are... perfect.

I'd love to know if they're still able to communicate with the animals we've had which have passed away and they'd probably just roll their eyes – or tell me!

Many Thanks Kristin Bauer

Kristin Was Speaking With Kim O'Meara