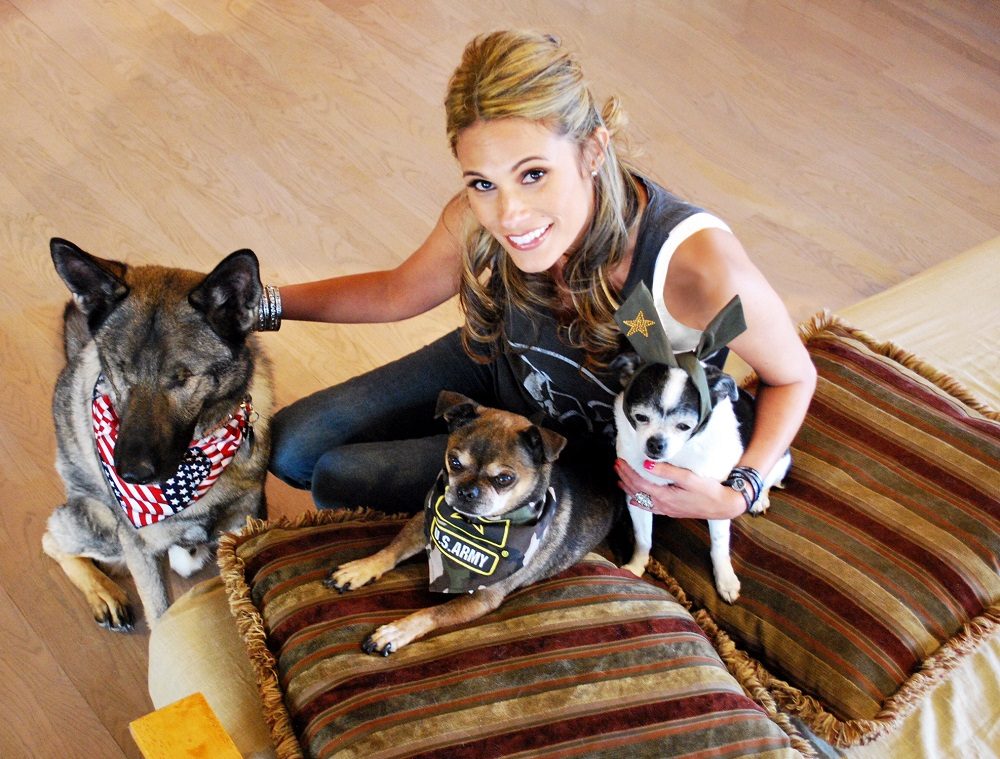 Bonnie-Jill Laflin is a well-known face in the world of American sports and has used her platform to speak out for animals for many years.

Her non-profit charity, Hounds and Heroes was born from her passions for animal welfare and supporting veterans and because of this, one of their core objectives is to rescue dogs in need and train them before rehoming with veterans and first responders.

Viewers of the latest season of 'Basketball Wives' will have heard Bonnie-Jill's castmates talk about her work rescuing and rehoming Beagles saying she's on a "mission to save them all".

But Bonnie-Jill's work over the last year hasn't ended there. One of the main reasons she was cast on the latest season of the reality TV show is because they wanted to bring someone into the mix who's career focused with a strong desire to give back, as she told us.

This year Bonnie-Jill has used her experiences with animals and veterans to visit Washington to try and bring about change through several bills with an animal connection which aims to help veterans and victims of domestic violence.

Although the experience has been an eye-opener to the world of lobbying, she tells us it has also been interesting to see how the party politics are put aside for animal bills and what you can do to get your own local politician involved.

Hi Bonnie-Jill. We’ve spoken before and know you’re a big dog lover. Recently we know you’ve been spending time in Washington D.C. Can you tell us what you’ve been working on?

I have been to Washington, DC twice so far this year and plan on returning in July before they take the August recess and return to their districts.

I am actually working on several bills that help animals as well as veterans and victims of domestic violence.

We know these are causes close to your heart from our discussions previously about Hounds and Heroes. Was it just a natural step to move from your work with the non-profit to trying to influence change from the top down?

In a way. I started becoming more politically active by supporting the Safeguard American Food Exports (SAFE) Act which will ban horse slaughter in the US and prevent horses from being exported for slaughter.

I also advocate for two bills that will help facilitate the placement of rescue dogs with our brave men and women who suffer from PTSD and Traumatic brain injury as a result of their time in service, something my charity Hounds and Heroes works on.

A bill that was just reintroduced called the Humane Cosmetics Act will prevent the testing of chemicals and other substances on animals in the development of cosmetics. A process that other countries have already banned, but continues in the US for some antiquated reason.

There is also a Resolution in the House of Representatives by Cong. Alcee Hastings (D-FL) calling on China to end the Yulin Dog Meat Festival.

You adopted Jaclyn Chan from China, saving her from the dog meat trade, didn’t you? Do you think change can or will be forced soon?

Sadly this cruel event just took place, claiming the lives of thousands of cats and dogs despite claims the government said it was outlawed and would be enforced. In the end, they did nothing and the "festival" went on.

We must support groups in China working to end this and continue to show support for calls to its end.

I can go on, but one final bill I will mention is the Pets and Women Safety (PAWS) Act which provides funding to domestic violence shelters to provide housing for human and animal victims of domestic violence. We have found that too often, women won’t leave abusive situations because they also fear for the lives of the animals in their homes from dogs, cats and even horses. You can see a list of good and bad bills I talk about at www.theanimallobbyist.com.

It sounds like there are quite a few bills being worked on at the moment with an animal focus. For the layman, once a bill is prepared what happens next?

Wow, that is a tough question with no short answer.

When I first got involved in federal legislation I had no clue how complicated and political the process really was. It sure isn’t the School House Rock video, ‘I’m Just a Bill’, though that is good to watch.

A single Congress (we are currently in the 115th Congress) lasts two years and is divided into two sessions.

That means for two long years you have to find a sponsor to get a bill introduced, work daily to build co-sponsors, battle to secure a Committee hearing and finally floor time to vote on the bill.

Thousands of bills are introduced every year, but only a small fraction even get floor time and this has to take place in the House and Senate before it can become law.

For example, my friend Chris Heyde of Blue Marble Strategy was the man behind bringing the bill to ban horse slaughter before Congress way back in 2002.

He has led the campaign since that time. The bill always enjoys strong bipartisan support, in fact, more than enough to pass Congress if given a chance.

It has had hearings and even passed the House of Representatives a few years ago only to not get time in the Senate.

It shocks people when they realise Congress really doesn’t follow the will of the people, it more often follows big donors and pure political ideology. In the last national poll over 80% of the American public supports a ban on horse slaughter and yet, Congress fails to act.

Do party politics between the Democrats and Republicans play a role in whether bills are considered or falter before they have a chance to be heard?

Everything in Washington is about politics. However, animal issues are a bit different than most, including environmental issues.
All of the current bills I am working on have Republican sponsors or lead co-sponsors. Each bill also enjoys strong bipartisan support in the House and Senate. Animal bills appeal to everyone.

Where the animal movement falls seriously short is political muscle, despite fundraising claims by some groups that there are 15 million supporters.

We sure don’t vote that way.

While everyone loves animals, our bills do get pushed aside when it comes time for Congress to act. I think legislators realise animal advocates aren’t very unified when it comes to political affiliation or issue affiliation.

What do you mean?

Well, by that I mean when an animal activist goes to vote they are more concerned with the candidate that focuses on health care or taxes or some other issues instead of how they stand on animal welfare issues.

Politicians realise they can then dismiss animal issues without facing any political backlash.

That is why I am trying to speak out more about this problem.

You can find compassionate politicians in either party, we just need to elect them based on support for animal legislation.

What are you hoping to achieve in your next visit before the August break?

Right now we are working on building bipartisan co-sponsors for each bill and trying to get a hearing on them. The more co-sponsors a bill has, the more attention they get from leadership.

We need to convince the leadership of the House and Senate that there is strong support for our bills, that they could pass if voted on and it is politically the right thing to do which is often the most difficult.

Before we let you go we have to ask a bit about one of your latest adventures into the world of reality TV. The latest season of ‘Basketball Wives’ is drawing to a dramatic close. How did you get involved in the show?

The producers approached me because they thought I might bring a different dynamic to the show. There wasn’t anyone in the cast that was career-focused and had a strong desire to give back, and the timing seemed right for me to bring these elements to the show. With over 3 million people who watch the show, what better platform for all my causes.

Has it been fun?

I’ve found the experience very interesting and yes, had some fun. I've become close with a couple of the girls so that's made it easier. I do wish that we could have one gathering where there isn’t so much drama!

Thanks Bonnie-Jill, we wish you lots of luck in Washington.

In this article:Featured, Issue 104