Elsie is most definitely one to watch with big things happening this year. She recently took to the stage for the Queen's Jubilee concert and looking ahead she has a Summer tour with the one and only Sir Tom Jones! Her single, 'London Town', is released on 23rd July - see the video below - we can't help but think 2012 is set to be an amazing ride.

Kim O'Meara caught up with Elsie to find out more about one of the most important men in her life, Brando, and we get a sneak preview of 'Dangerous Dog' a song inspired by him.

Tell us about your dog, Brando - we'd like to know everything about him!

Brando’s a Bull Terrier, not a Chinese Pit Bull – which is one of the weirdest things people have said to me! He’s pretty much the centre of my life as everything I do is governed by him and his needs. He is breed standard – a toddler in a dog suit. If he’s not sleeping, he’s getting up to mischief, demanding I play with him, eating or destroying something. And he likes to put his long nose into any bag I happen to leave on the floor. 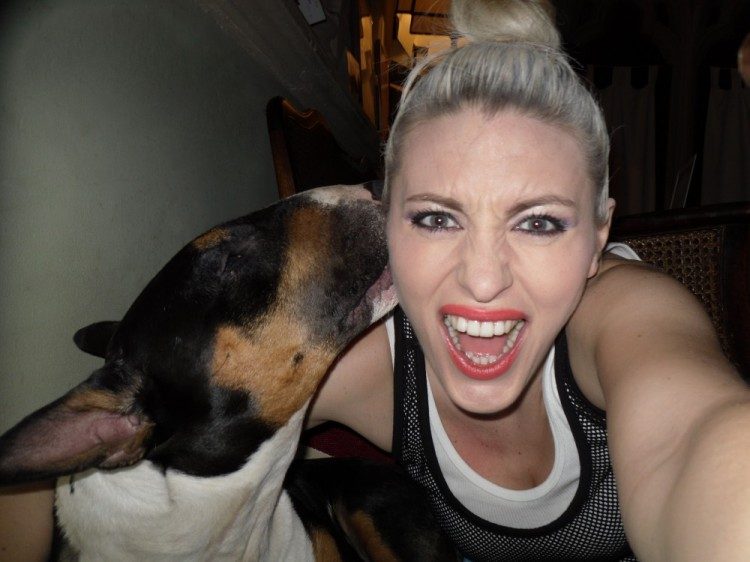 I got my first dog when I was three – a Heinz 57 called Citroen. I didn’t really see him as a dog, I saw him as more of a brother. He was a part of the family and the reason I love animals. It’s a cliché, but I find it hard to like anyone who doesn’t like animals.

Your single, London Town, is out very soon. This Summer seems like it's going to be huge for you! Tell us what you have coming up.

Well – deep breath – London Town is released 23 July just before the Olympics and I’m hoping people get into it. It’s a summery celebration of the Capital and my radio plugger is pushing it hard for plays. The online video has been getting a great reaction too!

I’m also on tour with Tom Jones so I’ll be going everywhere from Poland to the South of France via V Festival and a gig in Chris Evans’ pub. Basically just working my socks off.

Apart from Blondie, who it's apparent had a big impact on you musically, who would you say were, or are, your big idols?

The music industry seems to be ever evolving to get intune with all the WWW can offer music fans. How have you embraced the web and used it to it's fullest to get your work out?

I’m on Facebook and Twitter all the time as I love a good natter and it’s important to interact with the people who support me. My last two videos have been interactive – you get to choose how I behave throughout the song. Unless you’re a big name artist, I think making a video which is just someone singing their own song is a bit dull for viewers. You have to give people more to do than just click play.

Do you have a motto that you live your life by? What would you say Brando's motto might be?

My motto is: “Keep at it, because one day Your best will be THE best.” I think Brando’s would be: “If it ain’t broke, break it!”

If you were to swap roles with Brando for a day, how do you think he'd cope being you and what would you most love about being him?

(Laughs) That’s a fun one! Brando would give up immediately. While he does like to sing (you should hear his drawn out morning yawns) he also likes to sleep A LOT during the day, which sadly isn’t an option for me.

He’s not keen on cameras which means making videos and posing during photoshoots is a non-starter for him. The last time we had an official photoshoot together, he broke a six foot mirror and we were asked to leave early! 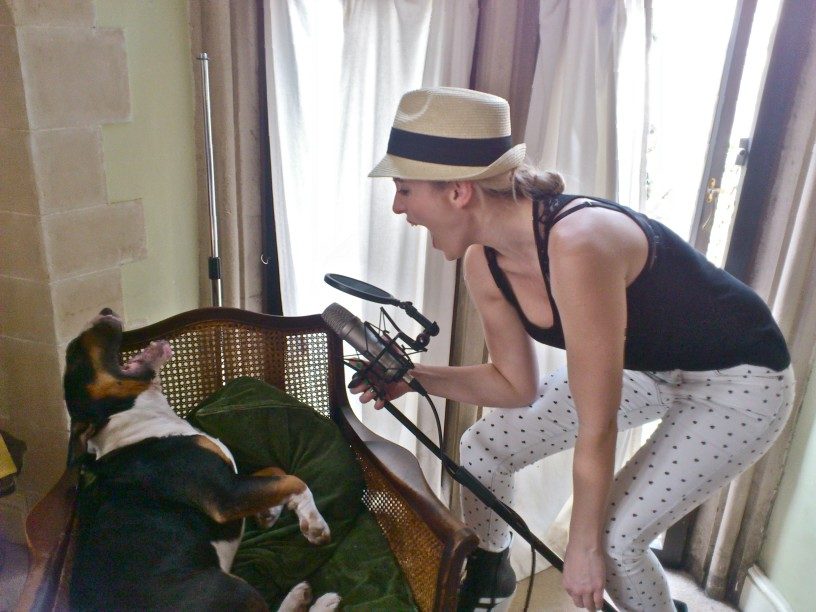 I’d love to have my neck tickled on request and I’d LOVE to be able to get rid of anyone who annoyed me with a growl or a bark rather than worry about offending them.

Alice Cooper – A Spaniel raised on the wrong side of the tracks.

Big dogs or little dogs – I love them all but I prefer big dogs. I volunteer at The Mayhew Animal home and when I walk the little ones I always worry about stepping on them. I also love having a snuggle with a big tough-looking dog, acting all soppy.

Pedigree dogs or cross-breeds – Obviously I have a soft spot for bull breeds, but I like crossbreeds the best because they just have so many different character traits. Not to mention they’re generally healthier. Overall though, through The Mayhew, I’ve learned that the most important thing about any dog you get is that you get one from a rescue centre.

Days off or days at work – I love the idea of a day off, but in reality, if I’m not working then I feel guilty. Being a musician is being self-employed, which means if I don’t work hard, I won’t get in trouble, but I also won’t achieve much. The only real downtime I ever have is walking Brando or a Mayhew dog. 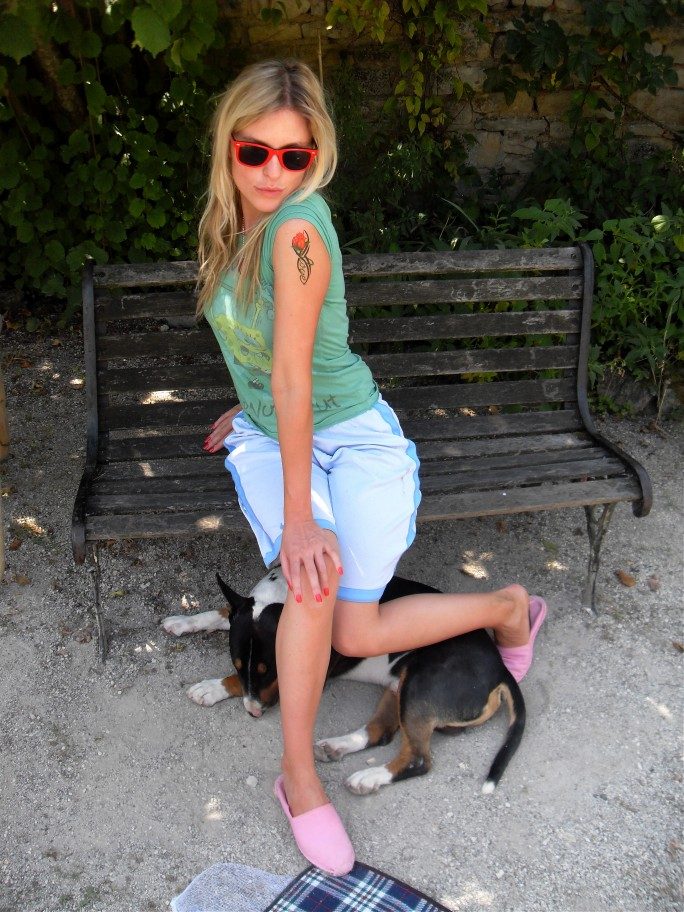 Describe the last time you laughed outloud because of something you saw Brando, or another dog do.

I laugh every time Brando runs for a ball – because of his final leap. He charges along looking like a muscle-bound tank and then at the last minute does this ridiculously camp pounce. He’s never had ay ballet training, so I’ve no idea where he got this light, graceful move from.

If you had the choice to arrange a dinner party inviting three people (choosing from any era, past or present), who would you choose and why?

The male supermodel David Gandy – not only is he ridiculous eye candy, but he’s also a confirmed dog -over and dog charity spokesman.

Simon Cowell – another dog-lover, but also it’d give me the opportunity put my own songs on repeat over dinner. He does have the golden touch after all.

Lily Allen - I know she’s a Bull Terrier lover and we could talk about how mad the breed is.

What are the most listened to tracks on your iPod just now?

I’m trying to get into Zumba, so I’m listening to lots of high-energy tracks. Rudimental’s Feel The Love is on repeat as is LMFAO’s Sexy And I Know It. I WILL shift those muffin tops!

Lyrically, what song do you best think sums up Brando's character?

It Wasn’t Me by Shaggy! I also actually wrote a song about him called Dangerous Dog. It’s probably going to be a single, but here’s a link so your readers can have a cheeky exclusive listen (click here)!

The fact you are able to have such a strong and emotional connection and bond with a different species is so powerful. In another life, I’d be a zoo-keeper so I could build those bonds with other animals too. People talk about the unconditional love your dog has for you, but it goes the other way too. I love my dog despite every one of his faults and I never have to forgive him. I can’t say that about any human.

Finish the following sentence, my dog is...a spoilt little git who doesn’t know he’s born. He’s made a mess of my home, chewed most things I hold dear to me, alienated several former friends, barked until I’ve got a headache and consistently annoyed the neighbours. He’s also the only thing in my daily life that I couldn’t live without. Including my music career and all that goes with it. 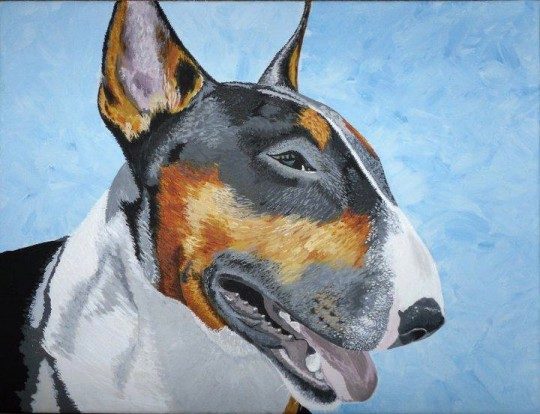 A painting of Brando, by Elsie

And finally, this is always a tough question and often requires a fair degree of thinking time but….If Brando had the ability to speak and answer one question and one question only, what would you ask him and what do you think that he would say?