The dog has been with us long enough to have gathered a nice collection of quotes, sayings and philosophical mutterings. You may have heard someone say something about dogs that you’ve had heard many times before but didn’t know exactly what the term or phrase meant. Well, let’s see if K9 Magazine can help. 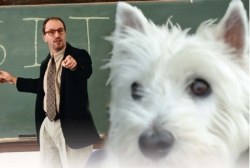 Some of the common phrases you’re likely to have heard are much older than you might expect. Some of them date back to the ancient Greeks and Romans…and beyond.

Many of the phrases that are still used today are not used in the same manner as they once were.

“The Dog Days of Summer”

This phrase originated from the ancient Greeks and Romans and is often referred to as “die caniculares”, “Days of the Dog” or simply “Dog Days”. The phrase is used to refer to the extreme heat and miserable conditions that arrive with it each year. This time period was considered to be an evil period by many people.  Although it is no longer true, it was once thought that the heat was from Sirius, the Dog Star.

This phrase has no definitive origination however there are many different suggestions as to how the phrase came to be. The most widely accepted version supposedly originated in 17th century England. During this time period there were strong rains and downpours that drowned large amounts of dogs and cats leaving their bodies to float down the flooded areas. Due to the severity of the drownings, it often looked as though it really was “Raining Cats and Dogs”.

This phrase originated from the original Australian inhabitants. During cold nights these people would lie down into a hole to sleep. They would have their dingo to sleep on them for warmth. On very cold nights they would sleep with three dingos for the added warmth.

“The Hair of the Dog that Bit You”

This phrase is used today as a metaphor. If you have a hangover you would “Have a bit of the hair of the dog that bit you”. Or in simple terms, have a bit of alcohol to cure your hangover. Originally the phrase was used when someone was bitten by a dog and some of the hair from the dog was placed inside the open wound.

This phrase is used when someone is expressing their feeling to an extent that you think is excessive. Similar to that of a dog pouting or sulking after being forbidden to do something.

“The Tail Wagging the Dog”

This phrase refers to something that is of no importance, or very little importance, being used to make a scene or cover something of higher importance in a way of diverting attention for the main issue at hand.

There is no psychiatrist in the world like a puppy licking your face. ~Ben Williams

The great pleasure of a dog is that you may make a fool of yourself with him and not only will he not scold you, but he will make a fool of himself too. ~Samuel Butler, Notebooks, 1912

From the dog’s point of view, his master is an elongated and abnormally cunning dog. ~Mabel Louise Robinson

Man is a dog’s idea of what God should be. ~Holbrook Jackson

The dog is the only animal that has seen his god. ~Author Unknown

Dogs’ lives are too short. Their only fault, really. ~Agnes Sligh Turnbull

My little dog – a heartbeat at my feet. ~Edith Wharton

We long for an affection altogether ignorant of our faults. Heaven has accorded this to us in the uncritical canine attachment. ~George Eliot

I think dogs are the most amazing creatures; they give unconditional love. For me they are the role model for being alive. ~Gilda Radner

I think we are drawn to dogs because they are the uninhibited creatures we might be if we weren’t certain we knew better. They fight for honor at the first challenge, make love with no moral restraint, and they do not for all their marvelous instincts appear to know about death. Being such wonderfully uncomplicated beings, they need us to do their worrying. ~George Bird Evans, Troubles with Bird Dogs

Our dogs will love and admire the meanest of us, and feed our colossal vanity with their uncritical homage. ~Agnes Repplier

One reason a dog can be such a comfort when you’re feeling blue is that he doesn’t try to find out why. ~Author Unknown

I talk to him when I’m lonesome like; and I’m sure he understands. When he looks at me so attentively, and gently licks my hands; then he rubs his nose on my tailored clothes, but I never say naught thereat. For the good Lord knows I can buy more clothes, but never a friend like that. ~W. Dayton Wedgefarth

When a dog barks at the moon, then it is religion; but when he barks at strangers, it is patriotism! ~David Starr Jordan

If you think dogs can’t count, try putting three dog biscuits in your pocket and then giving Fido only two of them. ~Phil Pastoret

There’s a comment form below. Why not use it to submit your own words of infinite wisdom relating to dogs.

You won’t get paid, but you might find yourself being quoted in a thousand years from now!