Lassie, the Andrex Puppy, Bouncer and Lucky are just some of the nation’s favourite TV dogs. Have you watched one of them bouncing around and thought to yourself, my dog could do that? Perhaps he could, but would you know how to get the little guy on TV to show off his rare talent?

Here is the K9 Magazine guide to turning your pet into a small screen star, with lots of fun steps along the way.

Finding the best way onto the television: You need to establish early on what you think your dog will be a good at and what he may struggle with. For example, a well trained, agile and obedient dog may be suited to actual acting whereas, a slightly less biddable dog but who can do the ‘cute puppy look’ without even knowing it may be better suited to appearing as a model, such as the Dulux Dog.

To be able to act in television programmes, you need to be aware that you and your dog will spend most of your time waiting around for someone to call you. And remember, no matter how obedient and eager to please your dog is, it is likely that once he performs a command perfectly, he will be required to do it again and again until the lighting is perfect or the angle is right. He doesn’t know why he has to repeat the same exercise over and over again, and he may well get a little bored. 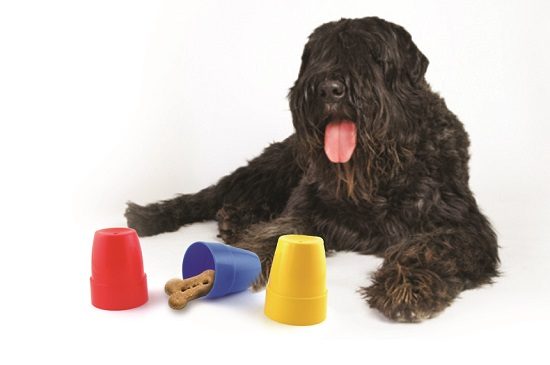 Creating the CV. Now that you have established that your dog will be better suited to an area of the entertainment and media industry over another, it is time to ‘sell’ your dog to the people that matter. There are agencies that specialise in providing animals to the entertainment industry. Cathy Cott is the founder of A-Z Dogs and she has supplied dogs to clients such as The BBC, Channel 4 and Warner Bros. Her dogs have also appeared in adverts for IBM, Coca-Cola and Hush Puppies.

She explained that for her to recommend a dog to a client, it needs “to have a relaxed and calm temperament, as television shoots can be exciting places to be for a dog. Most importantly the dog also needs to be extremely well trained and obedient. Producers simply cannot afford to waste time waiting for a dog to decide that he feels like doing as he is told. When you do your CV, it is useful to include all of the ‘tricks’ that you know your dog can do with no problems, as well as any classes he may have taken, such as agility. It is also important to include whether he is comfortable around other animals, children, in the city, on a farm and so on. If he hates horses, include that, but don’t lie about it as it could all end in tears.”

Creating the portfolio: This can be a lot of fun, and if nothing else will provide you with some priceless images of your dog in his finest hour. Cathy explained what she looks for when searching for the right dog. “The portfolio should obviously contain good quality images, long distance, grainy snaps are no good, as we need to be able to study the dog. We always look for a unique animal that has character. The portfolio should include a profile shot, a mug shot and as many different and interesting shots as you can get. I like to see dogs along side people, playing, maybe with something in their mouth  Try to get your dog in lots of different environments though, to show him off in as many ‘roles’ as you can.”

Have their people call your people. Now that you have your CV and portfolio ready, the next step is to get in touch with people who can put your dog forward for roles, this is called an agent. They will find roles that are suitable for the dog, taking into account his skills, his appearance and his availability. When approaching an agency, make sure that they are aware of anything that your dog cannot or will not do, so that you don’t end up in an awkward situation on set. The agent should be able to tell straight away upon meeting the dog whether he is right for a certain role. If your dog is not particularly skilled but has a unique and loveable face, he may be perfect as a ‘still model’ on an advert.

The big day. All the hard work has paid off and it is your dog’s first day on set. Remember step one, there will be lots of waiting about, so take plenty of toys and food. Be on hand to instruct your dog, and remember that it should be fun for both of you, just another activity that you can enjoy together. Your dog has no idea he is on TV, so don’t be too put out if his career is short-lived, he certainly won’t care too much.

Dexter is new to Chester's 'Hollyoaks'. Introduced to the show after Patrick Blake (played by Jeremy Sheffield) buys Dexter for girlfriend Maxine (played by Nikki Sanderson) as a present when Sienna (Patrick's daughter) tells him that Maxine is lonely. However, there’s a sinister undertone to this gift as it allows Patrick to track where Maxine is; he tells her to walk Dexter at specific times and he expects her to be at home with Dexter for the rest of the day. 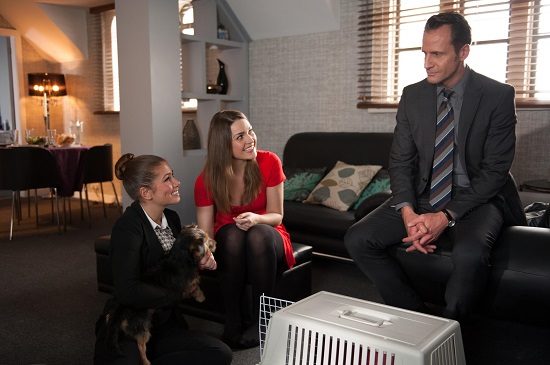 So how did Dexter land the spot on the show? Owner Rob Ellis, a writer on the show, spoke to K9 Magazine to spill the beans on Dexter's success.

What did Dexter have to do to audition for the show? Did he have to meet a particular brief?

Rob: As soon as we story lined a canine companion for Maxine, I think the general assumption was that Patrick would get her a small dog; like a Chihuahua, befitting Maxine's glamorous character. However, when putting Dexter - an eight-month-old Jack Russell Yorkshire Terrier cross - forward for the role, I was confident that his cheeky, fun-loving nature would buck the trend, giving Maxine a masculine, well-proportioned dog, who would dote on her, make her smile and actually prove to be the one 'man' in her life she could trust and rely on; a direct contrast to her often unpleasant relationship with Patrick. We sent in a short video of Dexter doing his various tricks - jumping, shaking hands, rolling over, playing dead and high-fiving, and I think it sealed the deal. Dexter will happily do almost anything for the reward of a piece of chicken.

Dog owners looking to get their dogs on TV might be creating a portfolio of skills and talents. What would you say are the most crucial skills of any dog on-set?

Rob: Aside from any special skills, talents or tricks a dog has, above all, a warm, friendly, social disposition is important. TV and film sets are busy, bustling places. So an ability to have patience, be calm and quiet when required, whilst being able to meet and mix with strangers or large groups, is very important. Like any actor, it's beneficial to have a CV and a show-reel, even a homemade one, that lists and demonstrates your dog's special skills. Hollyoaks is shot over months and sometimes out of sequence, so Dexter had to look exactly the same for two months. He was bathed before each shoot, and his coat kept at the same length. 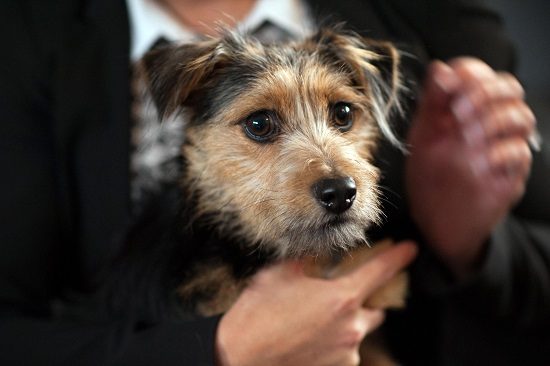 It's often said dogs in the workplace can be a brilliant stress diffuser. Did Dexter bring his own stress busting benefits to the set?

Rob: He certainly did. He's a fun character and just wants to say hello to everyone - often making getting to set a lengthy process! He made a lot of friends very quickly at Hollyoaks; from cast and crew to the cleaning staff. One cleaning lady in particular became his best friend, as she'd indulge him in his favourite game - we simply call it 'sweeping'. When he wants to play it, he'll make a mad dash to the nearest brush and place his paw on it repeatedly, until we grab the brush, sweep with it and let him chase it until his heart's content - much to the amusement of cast and crew.

'Never work with animals or children' is a well-known saying. Have there been there any fun moments with Dexter on set?

Rob: As any actor knows, there can be a lot of waiting around on set. Dexter has a great routine, but it's not befitting of a studio schedule. Quite often we'd be on set and naturally there would be a slight delay, so once Dexter had enjoyed his food and a long walk around Hollyoaks 'village' he'd be ready for a nap. If the director calls action, he'd have to wake up and jump into action; easier said than done. He enjoys his snooze time, and he'd let the director know with a sigh and a huff if he wasn't in the mood for performing. He's also been known to drag actors Joe Tracini (Dennis) and Stephanie Davis (Sinead) around the village on his lead, after hearing another dog in a nearby park. All in all though, Dexter's the ultimate professional and has taken to acting on Hollyoaks like a duck to water - or, perhaps more aptly - The Dog In The Pond.

Tune in to see Dexter on Hollyoaks, weeknights, C4 at 6:30pm.