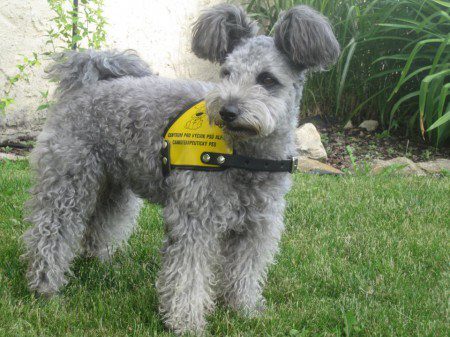 The ancestral Hungarian herding dog appears to have migrated with the Magyars and their livestock from the Ural-Altay region, between China and the Caspian Sea, to the Carpathian Basin around 800 AD, writes Meir Ben-Dror.

This dog most likely can be traced back to the Tibetan herding/guard dogs (Tsang Apso, mistakenly called terriers by Europeans) originated from China and Tibet and were widespread among various tribes in the region.

The ancestral Puli mixed with French and German herding dogs around 300 years ago, as a result of livestock trade with France and Germany.

In the early twentieth century, the Hungarians identified three separate herding breeds based on phenotype. The Puli was identified first, being prevalent on the eastern Hungarian plains. The Pumi was next, coming from the hills of western Hungary, and the Mudi the last, from southern Hungary. The Pumi was considered a regional variation of the Puli and the two names were used interchangeably for centuries.

Emil Raitsits, had initiated the standardization of Puli and Pumi in the 1910’s and 1920’s. The Pumi standard was approved by FCI in 1935.

Early breed standards of the Pumi noted the impact of other breeds. This included conformational differences from the Puli, such as the longer muzzle area, the smoother stop line than the Puli's, terrier-like upright ears with tilting top and different coat type. In spite of the fact that some refer to the Pumi as the “Hungarian herding Terrier”, there is no terrier blood in the breed; it only means that the Pumi has some terrier-like attributes, such as quick, alert temper, quadratic, lean and muscular body type.

The Pumi was used to herd cattle, sheep, goats and swine and it is still used today as such. Because livestock was typically kept in the village at night and driven to pasture for the day, the Hungarians needed a dog to work close in and drive livestock to and from pastures, keeping them within the pasture boundaries. The Pumi’s tools were barking, quick movement, and an occasional nip if needed. The Pumi also guarded the farm and alerted its owners when strange people or animals approached. It is usually very vocal and barking shouldn’t be encouraged in most non-farm situations.

The Pumi is intelligent, quick learner and energetic, needing regular exercise and mental stimulation. It is a good herding dog, who must be trained by someone familiar with its particular style of herding. The Pumi participates in conformation shows, and becoming popular for agility, competes in herding, obedience and other dog sport and companion events. They excel in all dog sports as they want to work and are eager to please. With daily exercise, the Pumi makes a wonderful house dog. It will bond closely with its entire family, but might prefer one family member. A Pumi will get along with children if brought into the family as a puppy.

The Pumi coat consists of 50% soft hair and 50% harsher hair, all of it the same length. A Pumi needs combing – never brushing! - every 2 to 3 weeks and then wetting down to let the coat curl back up. Once curled, the coat can be trimmed to keep it looking tidy. The Pumi doesn’t shed, but dead hair will come out when being combed. The Pumi’s hair is never blown out and fluffed with a hair dryer as that removes the characteristic curls in the coat and render it soft and cottony.

A Pumi is an active dog and, The Pumi is a thinking dog and must assess each new situation, so it’s best to expose it to many different situations while they’re young.

For further information about the Pumi, please refer to the FCI breed standard or the American Kennel Club (AKC) Pumi breed standard: http://www.akc.org/breeds/pumi/breed_standard.cfm

Inside this edition of K9 Magazine.... Talking Point: 5 Funny Dog Memes K9 Interactive: How To Get Your Dog On TV K9 Behaviour: The...

Well hello, as always we're thrilled to be here bringing you a selection of some of the latest and best dog products! We hope...

We're always on the hunt for the best dog products around, and we suddenly thought - what's the point in us knowing if we...

Sweep is a canine icon known around the world for his cheeky antics with Sooty and Soo. The trio are currently touring the UK...