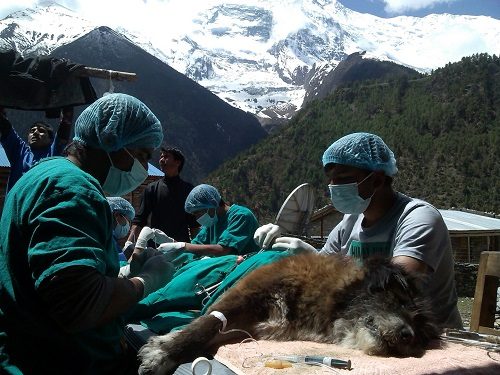 Nepal is situated between India and China. It runs along the Himalayan mountain chain in the north and descends, through foothills, to a flat fertile plain. Its infrastructure is under developed and many villages do not have road access.

A growing country with a keen sense of culture rooted in kindness, dogs can lead many different lives in Nepal depending on where they were born and of course their breed, says Barbara Webb, a British based co-founder of the Himalayan Animal Rescue Trust (HART) in Nepal, as she explains how dogs are viewed in the country.

In villages almost all dogs are free roaming though a few rich farmers may keep pedigree dogs confined. Although owned, the dogs are free roaming and are kept as guard dogs for property and livestock and to scare away monkeys to save crops. When a litter is born, strong and attractive male pups are either adopted by the family or given away to relatives or friends. Female pups are neglected and as a result they often die. Some are dumped or drowned into the river or discarded by other means though a few survive to breed the next generation.

It is a long held belief that if pups are drowned or dumped into the river before their eyes are opened no sin is committed. From time to time non adopted pups survive and mature in the villages. These are what is known as stray dogs because no villagers take responsibility for them.

In urban areas dogs are typically either strays, semi-owned/cared for by a community, or have their own home and owners.

Stray dogs are animals which have no owner or community ties and scavenge to survive. Community or semi owned dogs are free roaming animals which belong to a community but have no definite owner. They are acceptable to the community but there is no responsible individual who will have the dog vaccinated or take it for treatment if necessary.

Owned dogs are adopted by a family and treated either well or badly depending on the family's knowledge and disposition. Some owners do vaccinate, de-worm and medicate their animals while some are found abandoned completely when the animals become sick or develop skin disorders. However many owned dogs are continually tied up or confined in small cages.

Those who own pedigree dogs are typically kept as pets and status symbols, and generally confined to their owners house and compound. They have access to private vet care in Kathmandu and owners ensure they are vaccinated and wormed. The state of the breeding farms is a continuing concern for animal welfare organisations.

Nepali people are generally kind towards animals and often will attempt to give first aid to injuries and treatment for skin diseases. However in a very poor country the cost of further treatment can prohibit further action. For example dog owners apply motor oil to mangy dogs in the mistaken belief this will kill the mites. They do care and do want to help but lack of knowledge and lack of funds make their efforts counter productive.

Nepal is the only country where the dog is celebrated during ‘kukur puja’ (dog’s day on the second day of the festival of Tihar or Diwali). Dogs are believed to be messengers of Lord Yamaraj (death god). Dog owners and even those in the community who do not own a dog offer marigold garlands, tika (vermilion powder) and delicious food to the dogs before they eat themselves.

HART was established in 2010 with the main aim of improving life for animals in Nepal. Its main focus is on providing better understanding and conditions for community animals.

As their numbers grow in response to the food wastage inherent in any urban society, these animals are perceived as nuisances and threats by their communities. They can carry diseases, they cause mess, they bite and make a lot of noise. Rabies is still endemic in Nepal and dogs are the main carriers.

The municipal authorities are charged with dealing with the nuisance and danger caused by dog overpopulations and carry out culls when required to by community members.

These culls are carried out unwillingly by most local authority staff as Nepali's are not a cruel people.
Quoting from one worker, Munna: "When we were out poisoning dogs I felt we would also be killed like the way we are killing dogs. One of my colleagues nearly died when he swallowed a small portion of strychnine sulphate by mistake"

HART has built clinics in Pokhara and Bharatpur, two major Nepali towns. Every year in both areas the dogs are counted and vaccinated and all the females that can be reached are spayed. These two towns have stable and relatively healthy dog populations and by working with the local authorities it has been possible to ensure that no cullings have taken place in 5 years.

Specially designed smart-phone apps have recently been introduced to save time and improve the accuracy of data collection.

HART does not run a shelter in either town on the grounds that shelter animals rapidly become full. A shelter also offers the local community a way of avoiding its own responsibilities to its animals. In general in Nepal people who want a dog will take one from the street and thus adoption of "strays" is not a viable option for homing community dogs, so any shelter would remain full.

In addition to the work in Pokhara and Bharatpur, HART runs outreach clinics throughout the country.This is an attempt to replicate the programmes in areas that have no access to vet services for small animals and where urbanisation is moving many dogs from village life to town life.

Many local authorities and community members are reluctant to use poison to kill dogs and request outreach clinics in their areas. A typical letter reached HART's director in June;

Yesterday I got your mobile number through Dr. Yada at Advance Pet Hospital in Bishalnagar in Kathmandu. He briefly said about HART and this morning I saw your website.

I am writing this mail to get some suggestion and your advise regarding stray dogs in surrounding our monastery and villages in Humla. There are around 20 -30 stray dogs in our village and recently a group of stray dogs killed calfs several times. Villagers didn't kill the stray dogs concerning about reaction of the monastery and Guru. As Guru has been teaching and advising them not to kill and hurt others. But we fear that one day these stray dogs may hurt children.

Therefore our  monastery would like catch them and feed them in one compound. But it is not easy to catch and treat them. Therefore kindly spare us your ideas, technique,  and support to solve the problem. Is there any medicine to make them sleepy to catch easily. Is there any medicine to make them peaceful and not aggressive? Also about vasectomy to prevent further increase in stray dogs. Our district animal center has nothing to solve the problem.

In order to get to this village HART staff would have to drive to Nepalgunj (about 18 hours) , then take a flight from Nepalgunj to Simokot, and then walk for two days.

In view of the six weeks backlog of work caused by HART's disaster relief work after the earthquakes, it is unlikely that it will be possible to assist this concerned monk soon, which is saddening.

Attitudes to street dogs are improving over the years as evidenced by HART's annual in depth community surveys. For example in the region of Pokhara responses to the statement "I wish there were no street dogs " has gone from almost two thirds (65%) in agreement with the statement in 2011, to 37% agreement in 2014, and in 2011 almost half (46%) of people had heard of rabies whereas this had gone up to almost all (99 %) in 2014.

There have also been significant increases in owned dogs being vaccinated and decreases in bites over the same period.

In summary, dogs in Nepal are subjected to all varieties of treatment from their human companions, from outright cruelty, to indifference, to pampering and as well, to care and affection. Gradually, as information on animal sentience increases and as work to integrate them into local communities goes on, the view from Nepal is becoming a better one.

If you would like to get involved in any of the fundraising or educational campaigns Himalayan Animal Rescue Trust are running, please visit and support their work online at www.hartnepal.org or find them on social media on Facebook or Twitter.

Are you a dog owner living abroad? Get in touch commenting below - we'd love to hear from you!

Talking Point: Meet the Dogs who Don't Like Cricket, Oh No - They Love it! Talking Point: Here’s 8 Dog Friendly Beaches in South...

Here’s 8 Dog Friendly Beaches in South West England You Have to Visit!

We're all encouraged to holiday at home and when you're a pet owner it can sometimes be the preferred travel option. As we launch...

Ali Bastian is a British TV actress best known for playing Sally Armstrong in 'The Bill' and Becca Dean in 'Hollyoaks'. Since reaching the...

Have you ever thought about packing it all up, putting your working life on hold temporarily and taking time out to travel with your...