When Mia turned 11 years old in January I realised we had reached a point I wasn't sure we'd ever reach.

Two years ago she had a battle with cancer. But an all clear result, a second cancer scare and three operations later I can admit that it quite honestly feels like I'm always on edge waiting for the next worry to arise, so I feel incredibly lucky that she has reached the ripe old age of 11 because I wasn't sure it would happen. 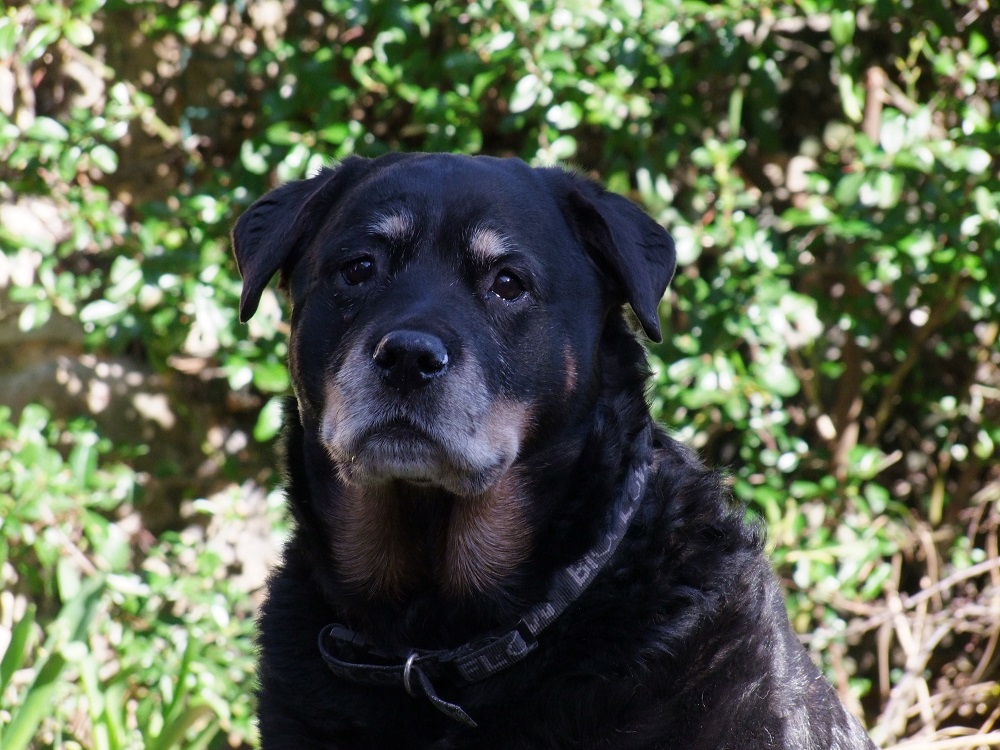 But she had and touch wood is in great health, generally. She has swapped long walks and football sessions for short bursts of play with shorter walks and in part, I think her good health is spurred on by her desire to keep the boys, Christopher and Danny in check. And boy does she. 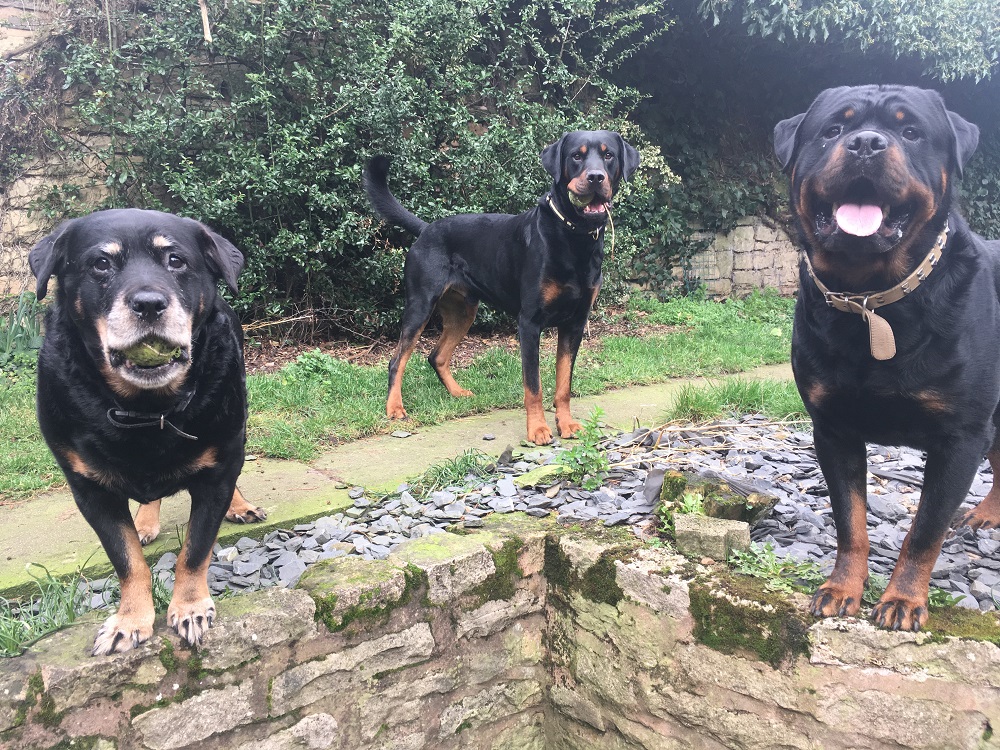 With Chloe, our old Labrador, she was a mellow girl but when the boys tumbled into the house, Mia's bossy side was awoken. In fact, I think she's at her happiest when she's either eating or when she has a ball and she knows they know she has a ball, and they don't have one. 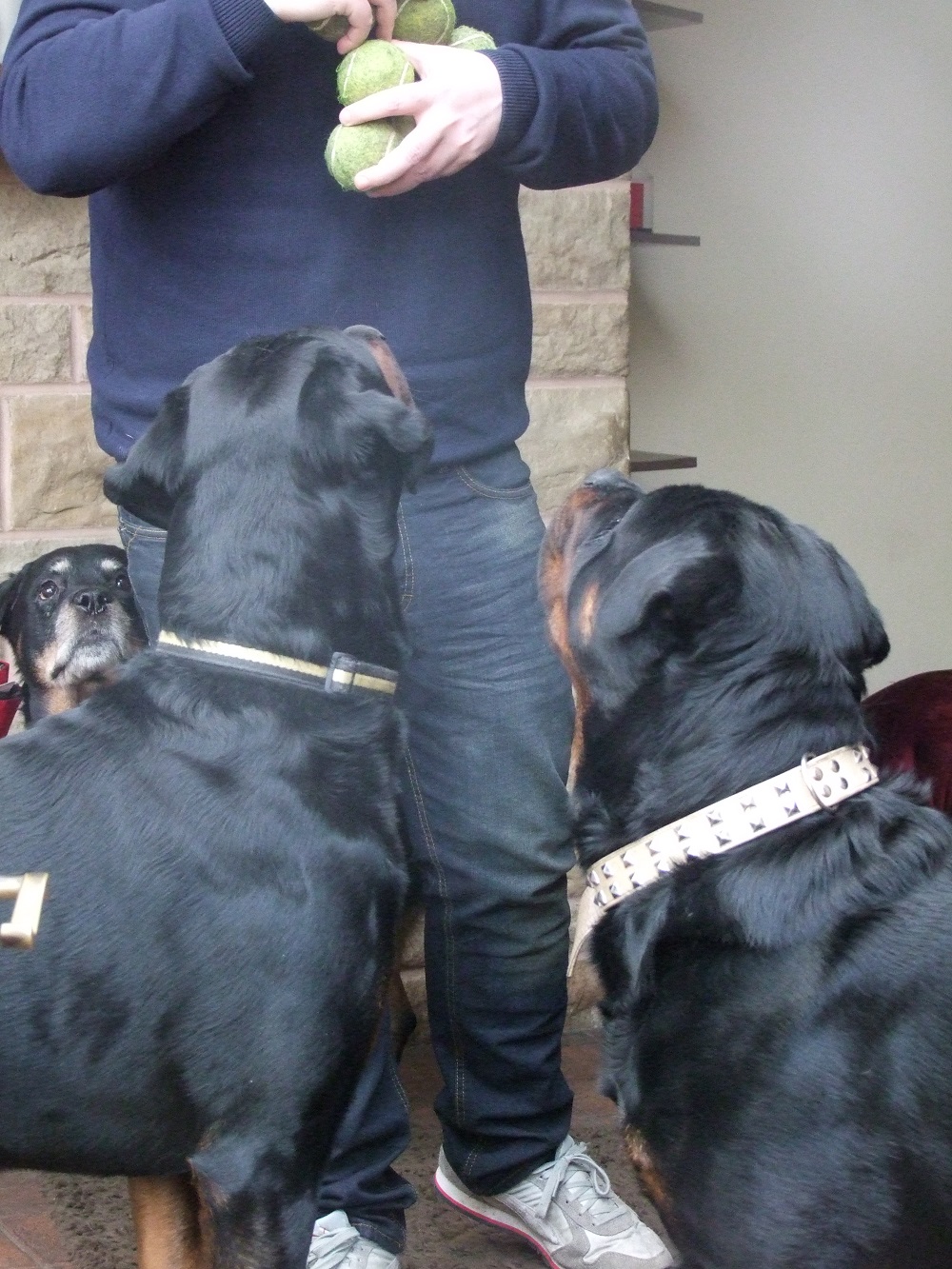 However, tumbling boys and bossy boots aside, even with modifications to her exercise regime in recent months I noticed, perhaps not surprisingly for her age, that her back legs were becoming more stiff, despite taking supplements daily.

It was taking her longer to get up from a lying down position and on more than one occasion I noticed her give a faint yelp. During a trip to the vets for her nails to be clipped, I mentioned it to her vet nurse and she told me her back legs were a little puffy and her feet out 'duck' stance was also a sign of arthritis setting in.

If I could help it, I really wanted to see if I could find a solution between the liquid supplement she had been taking and heavier duty prescribed veterinary medicines so I set about finding what else was on the market that may be suitable and could allow her to keep up with lunatics, like Danny.

Surely there must be something in between I thought? 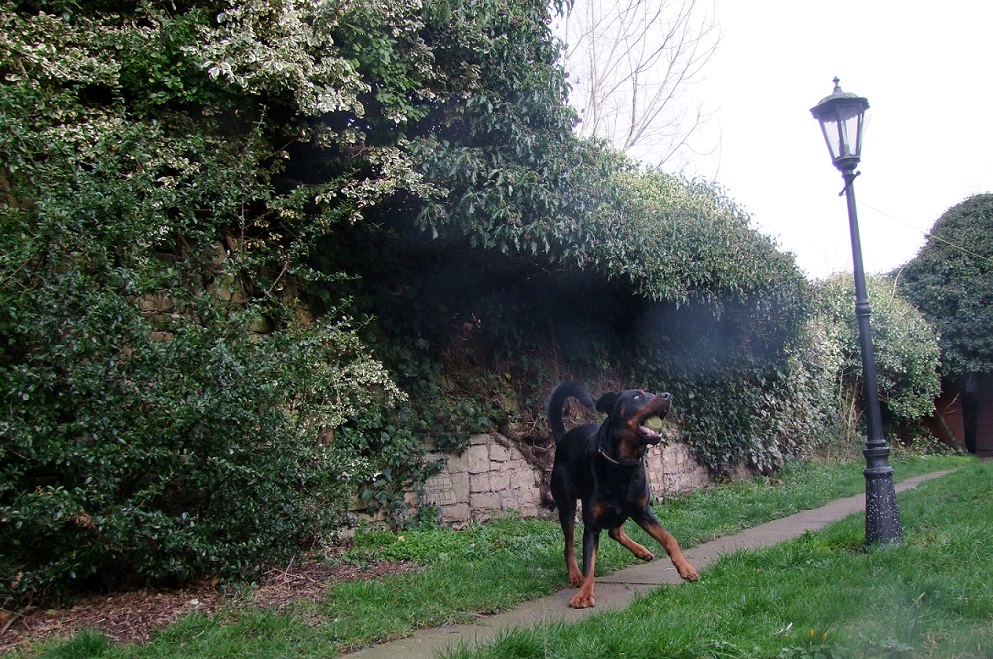 Then I remembered FlexiDog joint supplement from Simply Pets Online. I first read about it last year and had seen it recommended for older dogs. I knew it was formulated by veterinarians so I spoke with Dr Paul Proctor, one of the creators of the supplement about Mia and asked if he would recommend for her. 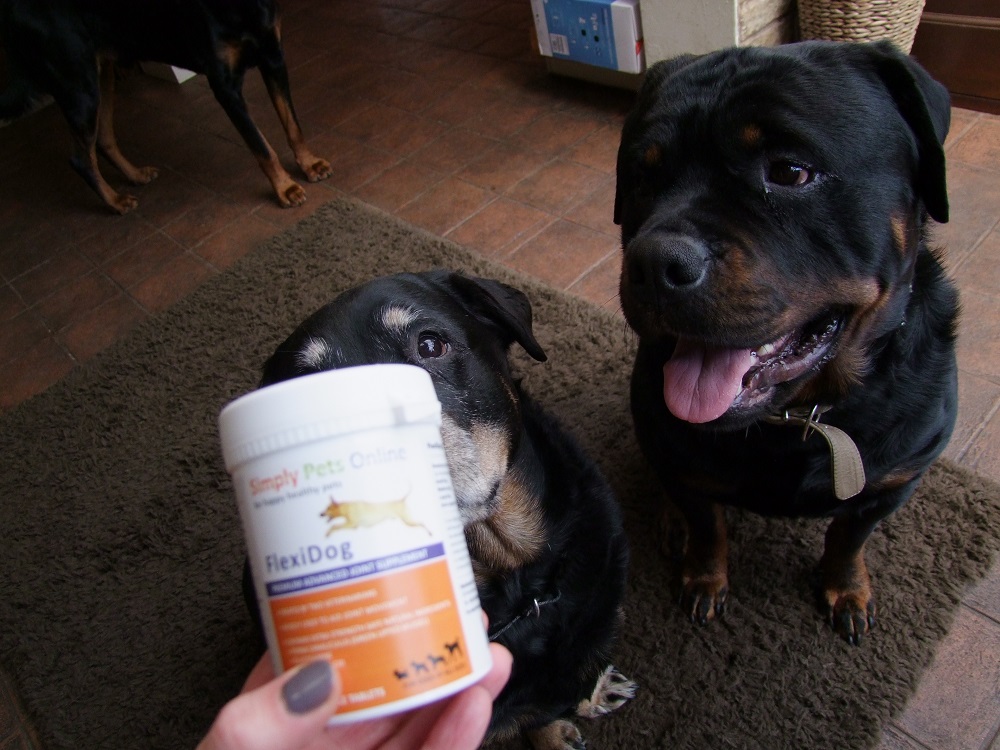 We were then very kindly sent a pot of the supplement for review and after her liquid supplement ran out we took a couple of days break before beginning our review of FlexiDog. I was dreading this stage but felt it was necessary to gauge how she reacted in between to get a clearer picture of just how much the FlexiDog supplement might work for her, if at all.

The supplement pot arrived quickly from Amazon and was thoroughly inspected by the boys on Mia's behalf (you can't expect the 'don' to do it herself I suppose). 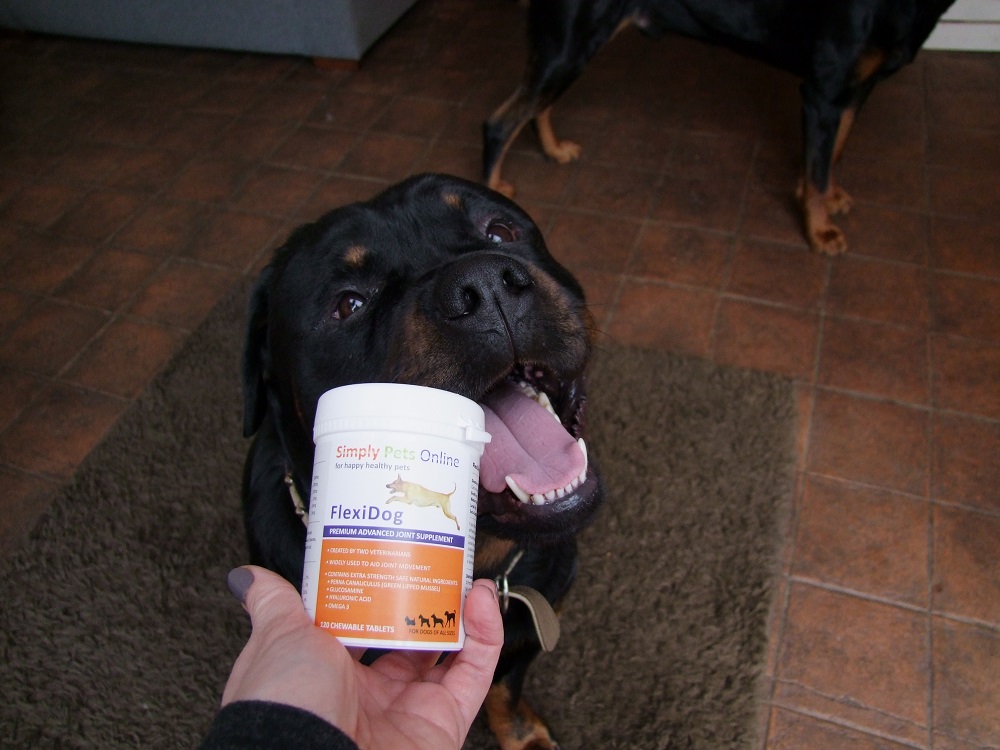 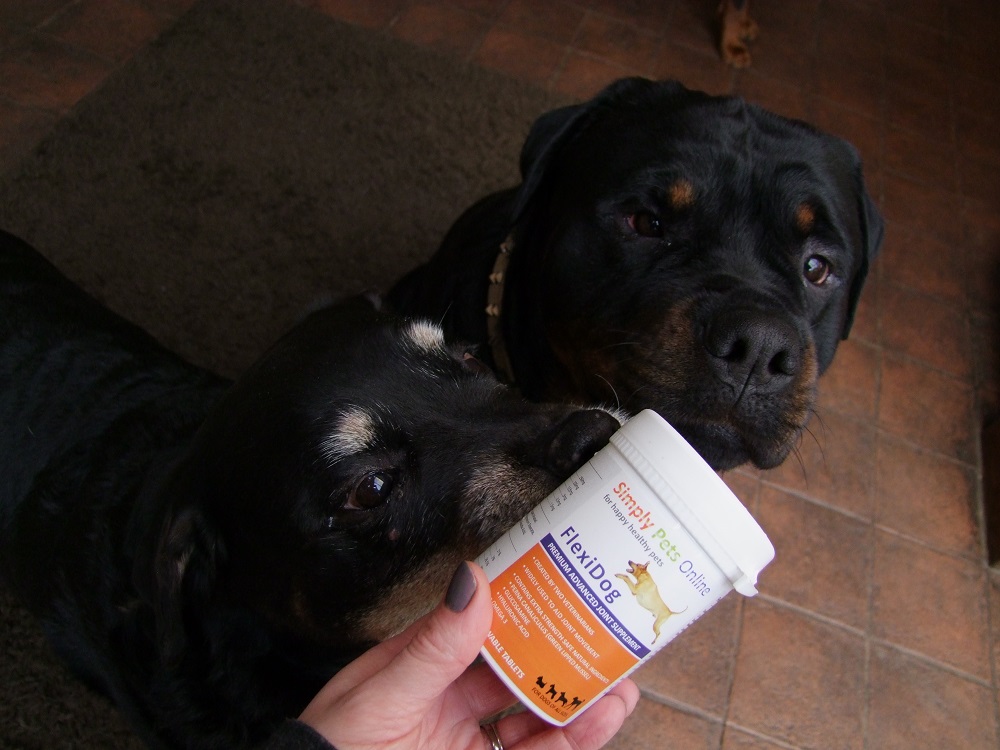 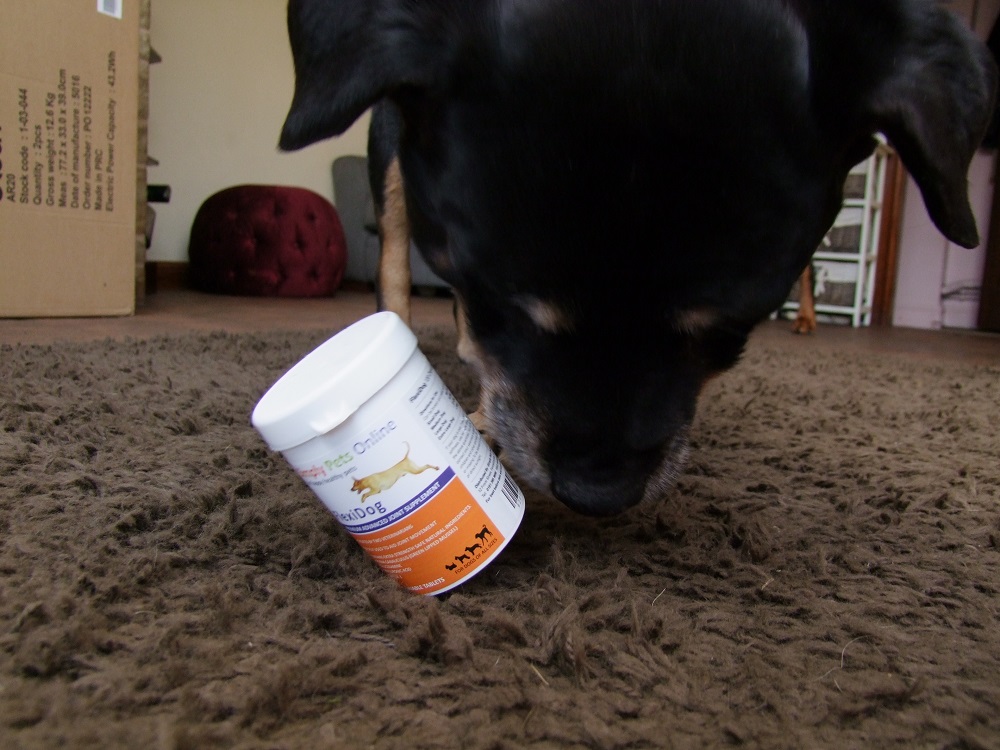 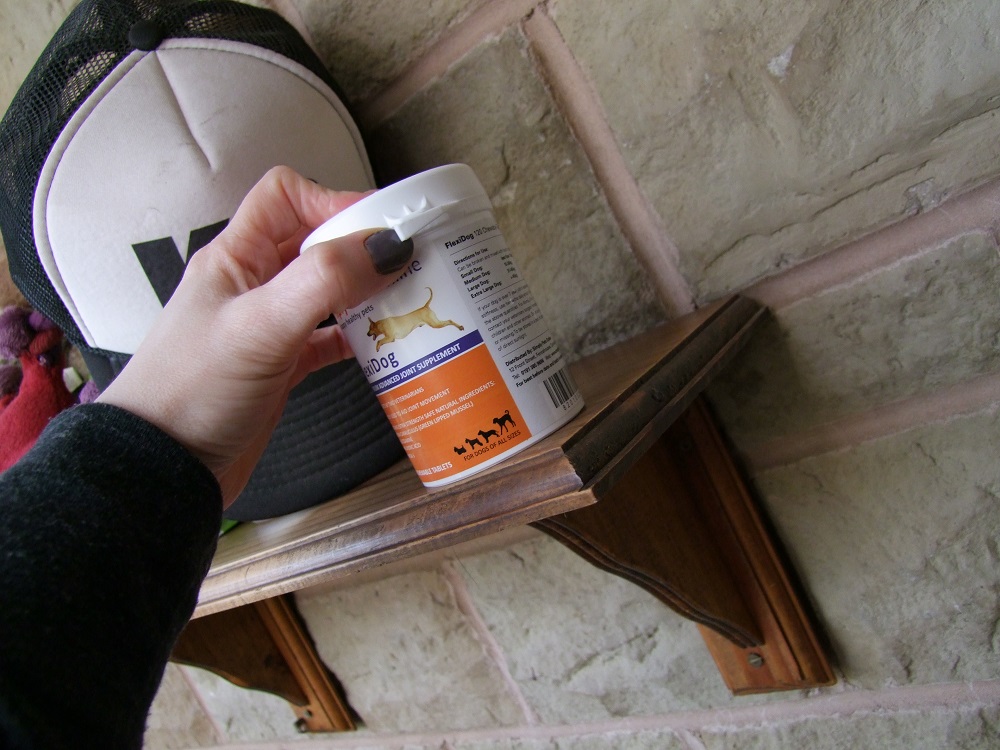 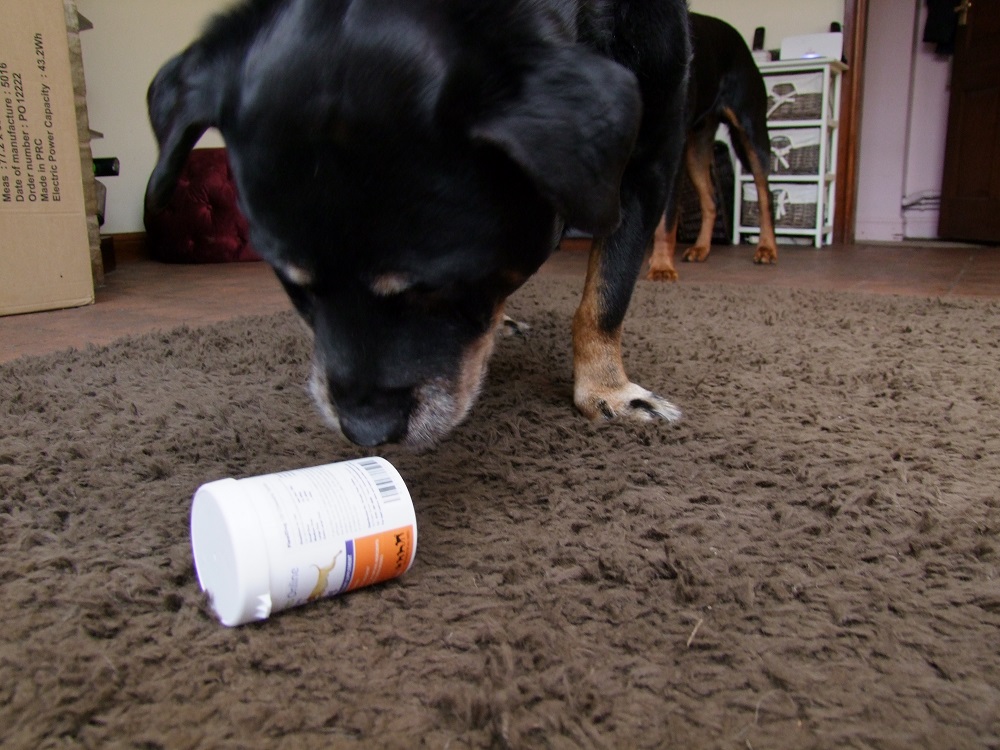 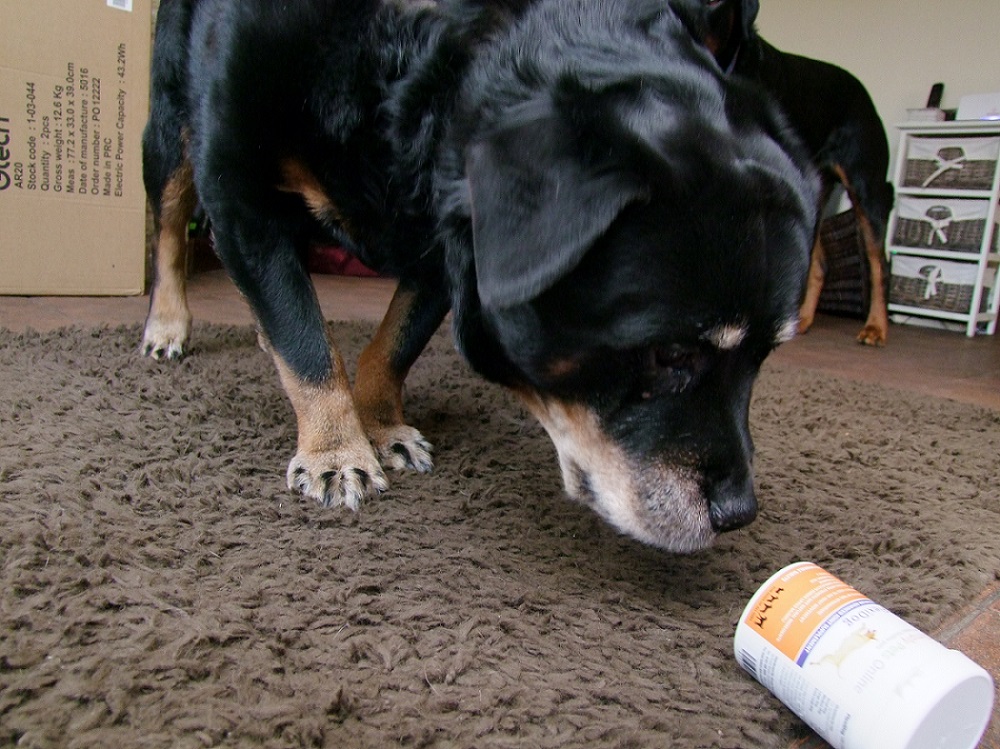 On the label, I noticed guidelines to help make sure you give your dog the right amount of tablets based on their weight. It also advised doubling the dose for 4-6 weeks if your dog is showing signs of extreme stiffness so I spoke with Paul about what Mia might need. 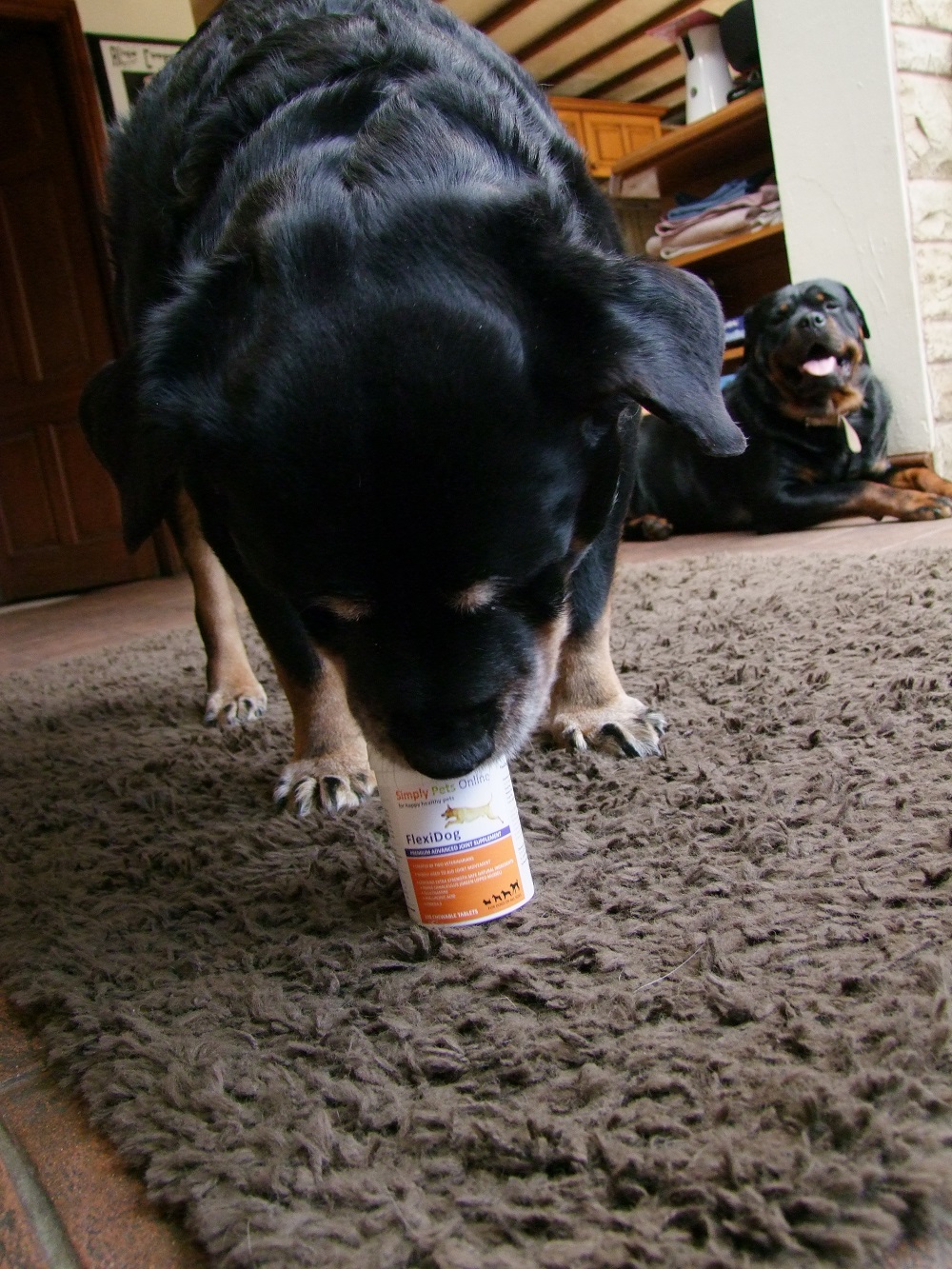 He told me that from everything I'd described to him Mia fell into this category, especially as her breed is prone to arthritis, so we began our test doubling her dose to give her four tablets daily, two with each meal. 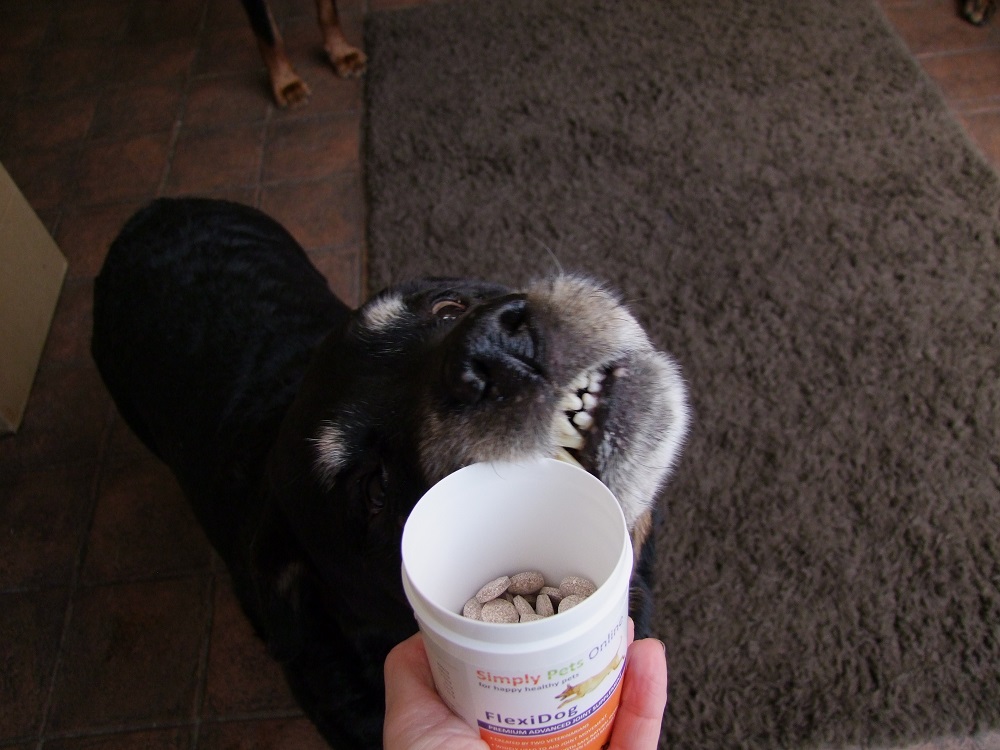 Each tablet is designed to be tasty and chewy and Mia ate without quibbling. 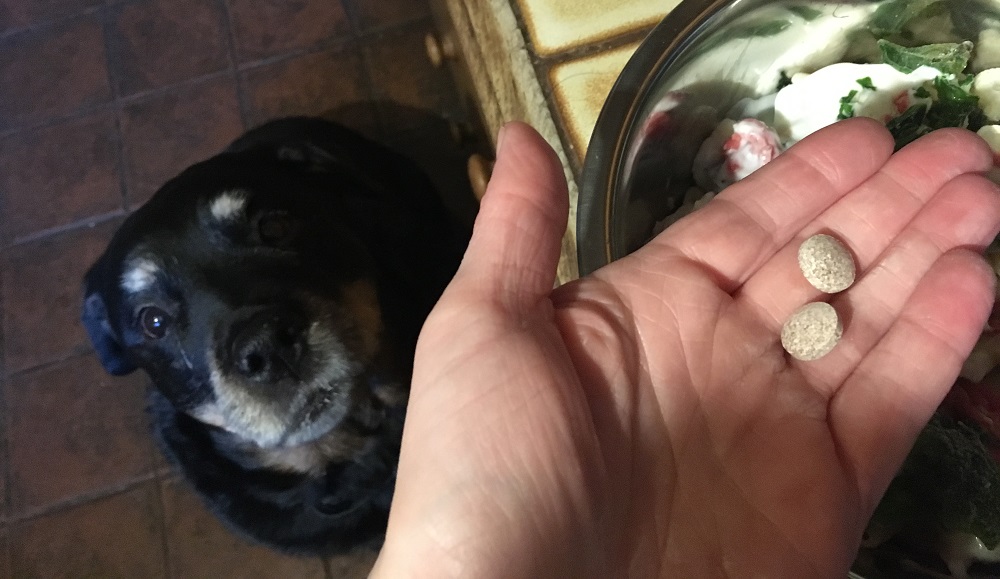 Within a few days, I noticed she rolled over to get up from a position of lying upside down (her standard position) much easier, without yelping or even grunting. Over the course of the next month, I noticed she seemed to have a little more 'juice in the tank' for short tennis ball sessions.

The only downside we experienced is because of how many tablets Mia takes, a pot doesn't last that long - although there's no point in giving her less if it'll lessen the results. Another concern I had before starting the review is that Mia does have a sensitive stomach and I wasn't sure how her digestive system would cope with more, or new, supplements added into the mix. By and large, she handled it okay though. 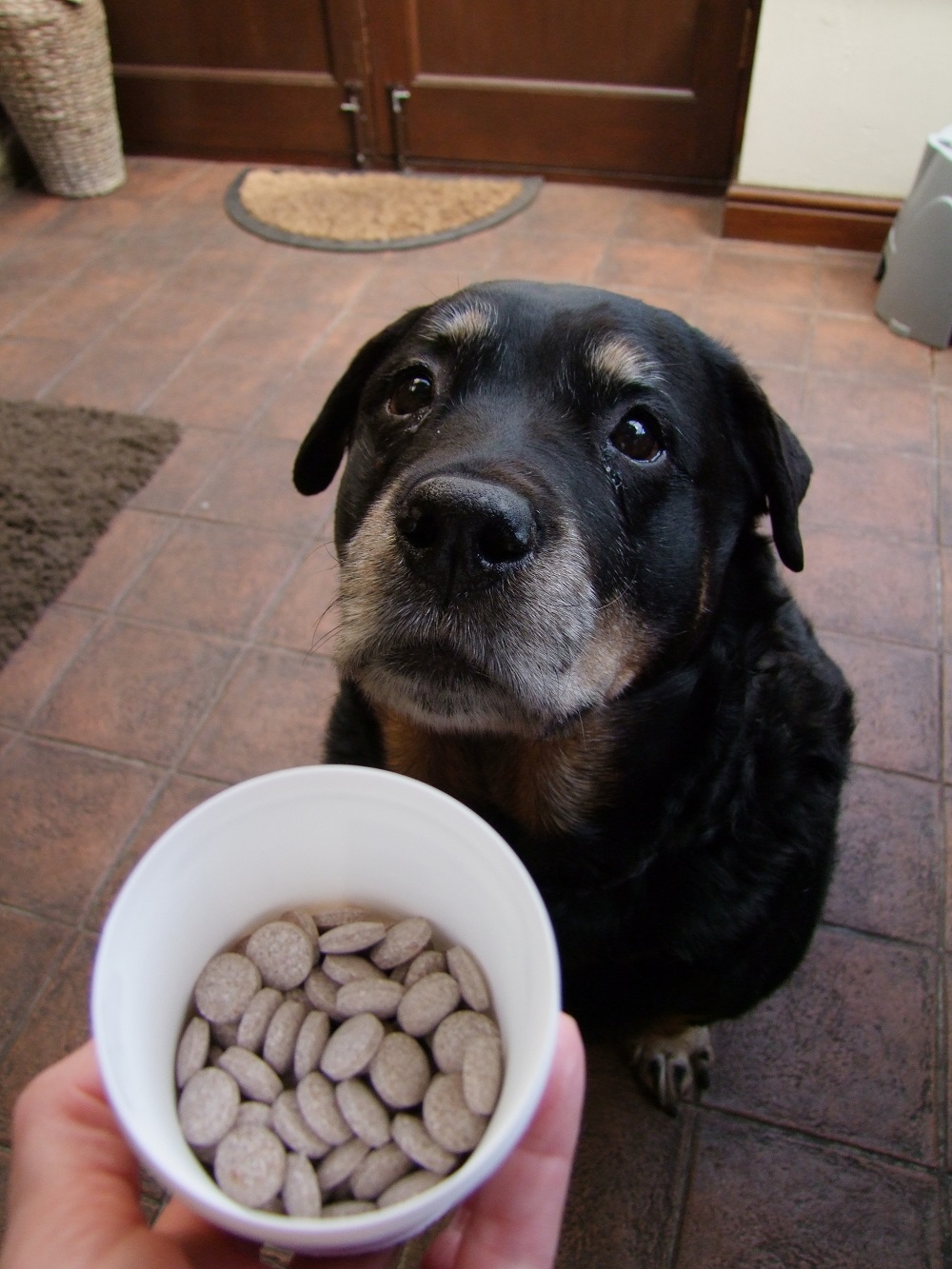 I have just bought a second pot of FlexiDog to continue our trial and really hope, even if it does just stave off the need for heavier duty medicines for a little while, that we have found our 'inbetweener' supplement because although it does sound silly and I would never avoid giving Mia what she needs, but it does feel that once you turn to heavier medicines for joints with an older dog that you're admitting you may be heading towards the homeward straight and after her recent health battles I'll do anything I can to avoid that mindset for as long as possible, as long as it's in her best interests. 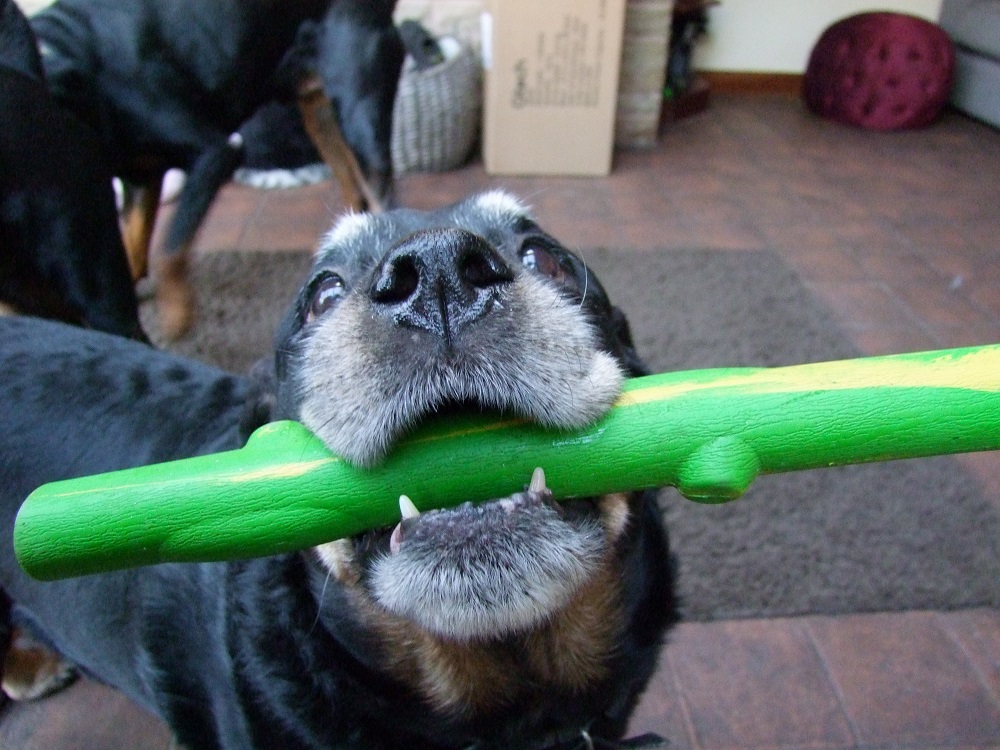 Many thanks to Paul and Simply Pets Online for sharing FlexiDog with us. Find out about them on SimplyPetsOnline.net or read more reviews and see their regular promotions on Amazon here. 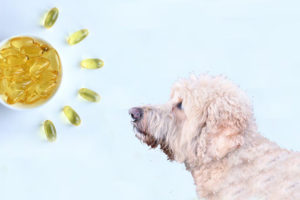 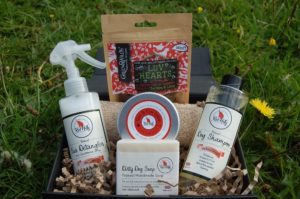 Introducing Red Nelly: A Website with an Ethical Ethos 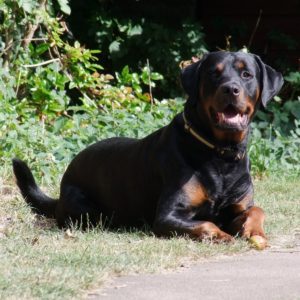 Have You Heard of For All DogKind? Here’s Why We Think You Should Know About Them