Sometimes being a dog owner means that your best laid plans can get thrown out of the window at any moment. So when Paul Rigg's dog Mutley went missing, only to re-appear injured and distressed shortly before he was due to embark on a dream holiday, he thought this was one of those moments. But with a little persuasion and the help of a handful of sympathetic Spaniards, Paul was to find that his near holiday destroying episode was to lead to a new, magnificent experience with his pet.

The north of Spain is home to the Picos de Europa, a protected bio-park at Muniellos and a myriad of small slate-roofed villages with spectacular mountain views. When a last-minute crisis threatens to wreck a trip planned for over a year, however, just how understanding will the local people be?

Our dog Mutley looked up at us from the concrete basement steps of the police station and slowly wagged her tail in recognition that she had been found. After two weeks searching for food and water in the Castilla countryside she had lost several kilos, was suffering from dehydration and had a deep open wound on her front leg. We took her straight to the nearest vet, who operated on her and then told us that what she most needed was our care and attention. But should we cancel our carefully planned trip to the spectacular mountain range in the North of Spain?  How would Spanish hotel and restaurant owners react when they discovered that our travelling companion was a dog? 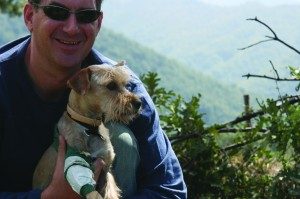 The first mobile phone call from our car was crucial to the decision of whether we would go or not. We had the first two nights booked at a Posada in Cahecho and if the owner had said ‘No’, then our decision would have been made for us. However after a short conversation the reply from the owner was: “there are few problems that cannot be solved in this life; you are welcome with your dog.”

I should admit at this point that while our dog is very respectful and good-natured, she is also, as the Spanish put it, a ‘little special’. With Houdini-like agility she had escaped through the window of a relative’s car as the driver slowed at a roundabout and, pursued by two policeman, had then headed off across a series of fields. After we found her, we honestly told the hotel owner that she very rarely barked, but suddenly the experience of being lost and found had transformed her into a much more assertive, and yappy dog. Finally, while we sincerely told the owner that she did not pee indoors, her dehydrated state meant that her kidneys were affected… and that we had another problem on our hands.

Fortunately the owner was very understanding and the other guests immediately showed sympathy and warmth towards the hobbling hound. We suddenly experienced the hospitality and friendship that the people of Cantabria and Asturias are famed for throughout Spain.

Moreover, when I asked whether it was possible to have something vegetarian to eat that night, I was not expecting a delicious vegetable Moussaka accompanied by a large side salad.  This area is well known for its meaty Fabadas (a kind of butter-bean stew traditionally served with sausage, black pudding and pork) and fish dishes, for example, but I discovered that its chefs were also more than willing to cater for more diverse tastes.

The next day we headed for the nearby town of Potes, a historic town that acts as a base for many activities in the area such as hiking, mountaineering, canoeing and Quads. In Potes you can wander through the narrow medieval streets and sample some of the great variety of cheese rounds such as Peña Remoña and Peñalon that are locally produced. Some shopkeepers will especially vacuum-pack them for you to take home as gifts. Making your way through the bustling street market you can also buy locally produced Orujo de Hierbas (a strong spirit), large pots of honey or even a box of the enticingly labelled cakes ‘los cojones del diablo’ (the devil’s balls).

From Potes you can make your way to Fuente Dé via a 25km winding road bordered by lush green Cantabrian pasture. These valleys are often misty in the morning and as we drove I did not think it would be worth catching the lift to go to the 1,847 metre mountain peak. However, the Cable Car climbs high above those clouds and allows visitors to pear down on soaring birds and puffy clouds to the roads and fields far below. The views in every direction are really breathtaking from this vantage point. From here you can either pay seven euros to return in the Cable Car - or if you are in a more spirited mood you can share a beer in the mountain top restaurant and then hike down. 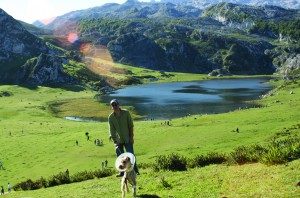 The following day we headed north through the Desfiladero de la Hermida, a gorge 8 km long with sheer cliff faces either side of the meandering river. Our first destination was the coastal resort of San Vicente de la Barquera that majestically combines rolling green pastures with sandy beaches and a long and impressive arched stone bridge with an imposing castle. Luckily for us, the town also has an excellent Vet. who kept Mutley in for the night to stitch her leg wound and check for possible permanent kidney damage. The bark she gave us the next morning when she was given her food told us that at least health-wise, she had turned the corner.

However that day we had been told we could not take our dog to the hotel that we had previously booked. Nonetheless, a quick phone-call to the tourist centre at Cangas de Onis resolved the issue and – for a ten-euro ‘dog supplement’ - we found ourselves in the far more welcoming ‘Casa de Campo’, a hotel and cabin complex in lush countryside, by a babbling brook.

The area of Cangas de Onis is perfectly located to explore the town of Covadonga – with its distinctive twin-tower cathedral perched high on the mountainside – and the famous nearby lakes. The park wardens close the road to traffic after 10am in the Summer, so if you want to avoid a long steep hike you need to arrive promptly. The scenic drive to the lakes takes you through a seemingly endless mountain expanse and the lakes themselves are set in a fairytale landscape of sheer rock faces contrasted by smoothly sloping grassland.

Next stop was Oviedo, a town that Woody Allen recently described as: “historic, clean and friendly…as if it was not from this world. When I leave Oviedo I have the sensation of having lived in a fairy tale.” Perhaps unsurprisingly, the people of Oviedo have erected a statue of Woody Allen in his honour and repeated his words at various strategic points of the town. It is true however that most visitors will be enchanted by this extraordinary town that allows pedestrians to calmly explore and enjoy a large swathe of its narrow streets and open Plazas without the sight of any cars at all.

It was from Oviedo that we drove through exquisitely quiet and enchanting countryside to the area around the town of Cangas de Narcea. Now well into Asturias, many locals say that the east of the region is like Cantabria while the west more closely resembles Galicia. This was once a heavy mining area, though the mines have now given way to a gentle expansion of rural tourism. Here you will also be able to see the unique ‘Horreos’ – large wooden cabins perched on conical stone supports that traditionally stored the corn and other crops.

We stayed at ‘Casa Ponce’ that surely must count as one of the most carefully restored rural houses in Asturias. Casa Ponce has its own Horreo – now used as hideaway for the grandchildren – and barbecue in an open courtyard at the front of the house. The owners clearly have a sense of humour and history, for example, as many of the lamps both in and outside the house are made of recycled miner’s hats.

This was the last stop on our itinerary as it is the gateway to the ‘Reserva Natural Integral de Muniellos’; a carefully protected biosphere full of walks and mountain drives. The biosphere itself only admits up to 20 visitors per day and it is necessary to book well in advance if you want to assure yourself of entry. We were told that we would not see the Pardo bears that inhabit the region but we were likely to spot otters and some of the 65 varieties of bird in and around the river and lakes. After lunch in nearby San Antonio, we drove on a circular three-hour ‘tourist route’ through pine covered mountains under cloud-free blue skies and with a gentle breeze in the air. 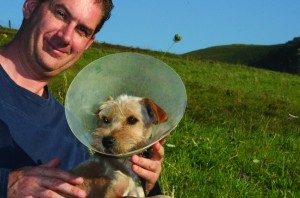 We were coming to the end of an idyllic week away in an area of Spain that is considered one of the country’s great riches by Spaniards but is much less visited by tourists. And it was here in the mountains that Mutley suddenly barked for longer than she had ever done in the whole year that we have had her. My partner and I looked at each other in astonishment - like us, something about the mountain air and scenery must have really moved her. 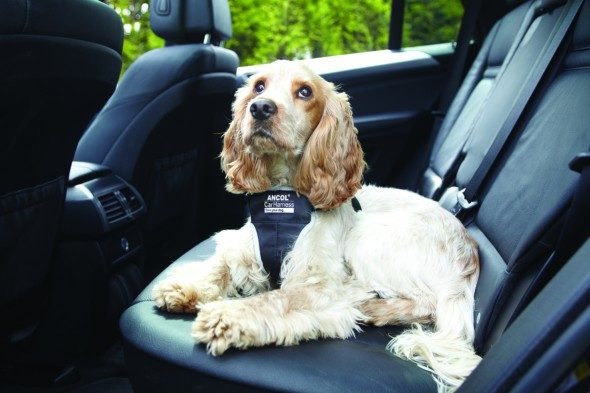 Ancol Travel Water Bowl – Designed to water your dog anywhere, from the beach to the highest peak. Lightweight and packs small, comes with own carry pack with plastic belt clip. 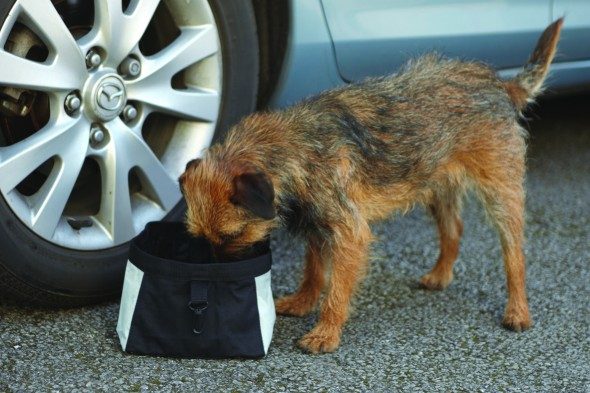 If you're thinking about booking a UK pet friendly holiday or one across Europe and beyond, visit www.petfriendlyhotels.com today.