Layla Kayleigh was born in the UK and moved to the USA to pursue her dreams in front of the camera. After much hard work and determination, Layla has successfully taken the USA by storm and has presented many prime time shows. Layla now co-hosts 'America's Best Dance Crew' for MTV where they search for hidden dance talent in cities across the USA. Kim O'Meara caught up with Layla to find out all about her two beloved dogs and what makes rescuing a dog so special.

Tell us about your pets. Names, breeds and ages.

I have two little dogs who I rescued when they were puppies. Munkey is a three year old Jack Russell Terrier crossed with a Chihuahua and Max is a two year old Chihuahua. I've had Munkey for three years and rescued him from a pound, he was only a little puppy and I fell in love with him straight away. My friend's dog had puppies but was told by her landlord that she would be evicted unless she rehomed the pups. That's when I got Max and haven't looked back since. I couldn't think of life without my two dogs, they are very friendly and love people.

When growing up we only had birds so until I had Munkey and Max I didn't really understand how much responsibility came with owning dogs. They have had so much impact on my life and I wouldn't change them for the world. Sometimes I think people get dogs for novelty value and that why so many end up in pounds and rescue centres.

You're the co-host of America's Best Dance Crew on MTV interviewing guests backstage and on the road during the trials. What do you love most about your job, I imagine you have to console someone one minute and ease nerves the next?

I love interacting and meeting all the different people we get on the show. Each kid has a different background, a different story and these guys are straight from the streets and have no dancing or theatrical training. Some of them have had bad experiences in life and see dance as a way of expressing themselves. It's so rewarding watching the dancers grow week by week. You can see the hope in their eyes and I know what its like to be in this business and get rejection after rejection.

Do you have a motto you live your life by?

I believe in hard work, guts and determination. I think its worse to never try than to try and fail. You have to take risks and sometimes fail but it's better to get back up. 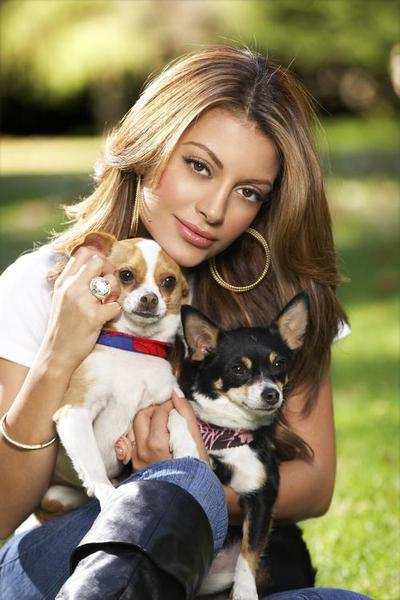 Do Munkey and Max go with you when you film America's Best Dance Crew?

When I do the shows, its usually 18 hour days and most venues don't allow pets. But Max and Munkey are my entourage. It's great to finish a day's work and then to return to your trailer and have them waiting for you to walk and play with.

I don't take them everywhere, only places where I get my own space. If I'm out of town for two or three days I'll leave them with one of my friends.

Where would you like to be in ten years time?

I think I will just go where life takes me. There are still some things that I would like to do, but I like to live in the moment and not worry too much about the future. I'd like to think that I'd have four or five dogs running around my feet and maybe a few babies.

(editor’s note :- some of our celebrity subjects ‘wimp out’ on some breed comparisons, we give extra credits for celebs who are brave enough to answer ALL of our questions! If you feel the need to qualify why you think Tony Blair should be compared to a Poodle with a written explanation, that’s fine, we will publish your comments.)

Randy Jackson – I'm not sure with Randy, he'd kill me if I said a feminine dog. He always says, “What's up dog” when he walks into the studio.

Jennifer Lopez – She'd be a Poodle, but one that came from the streets. Jennifer Lopez looks nice and elegant but we know she can still get down and dirty.

Simon Cowell – A Chihuahua, Simon's lovely and his bark is worse than his bite.

Mario Lopez – He's such a nice guy and so handsome. I think he'd be a Chocolate Labrador.

Big dogs or little dogs – I don't really mind, as I think it's the personality that matters. If I had a big house then I'd love a big dog.

Pedigree dogs or x breeds – I think when choosing a dog you should always visit a rescue centre first. It's so upsetting how many dogs are out there looking for homes. You should choose a dog depending on their personality, as it's going to be your best friend.

Days off or days at work – I have to say days at work as I like being busy, otherwise I think too much and miss my friends and London. I miss simple things about London like Marks and Spencers and custard.

Had to shout at your pet – I try not to tell them off too much and if I do they never really listen.

Had to go to the vet – Poor little Munkey hurt his foot so we had to keep taking him to the vets for check-ups.

Laughed out loud because of your pet – My two little boys make me laugh so much every day.

Embarrassed yourself – Everyday, I'm so clumsy. I also get tongue tired when I talk to guys and end up saying silly things.

Were nervous – I went to the Golden Globes the other day week and was so nervous walking up the red carpet. All the cameras were flashing and I didn't know which way to look.

They are so loyal and never let you down. 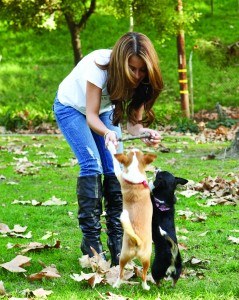 If I tell you then you'll know...I'm really shy in real life and that sounds so silly as I'm on TV.

Barack Obama, George Carlin and the Dalai Lama. I would like to people around people who I could learn from and these guys are smart, funny and full of wisdom.

What is your current favorite…?

TV show – I will have to say America's Best Dance Crew. I have to pinch myself that I'm involved in such a great show. I can't believe I'm working alongside Mario Lopez, I used to watch him on Saved by the Bell and now I'm standing next to him.

Book – Outliers: The Story of Success by Malcolm Gladwell.

Restaurant – There is a gorgeous restaurant in LA called Zucca. It's very small, quaint and hidden away from all the hustle bustle.

If you could sum it up, what do you think is the best thing about owning a pet?

I think they make you a better human being as you become more compassionate, caring and responsible.

And finally, this is always a tough question and often requires a fair degree of thinking time but….If your dog(s) had the ability to speak and answer one question and one question only, what would you ask them and what do you think that they would say?

I'd ask them how I could be a better Mum and I think they'd say “Give me more treats”.