Henry is a dog with a very important job. But his life hasn’t been plain sailing. At eight months old he was rescued by Louise Wilson, having been passed around five homes already before he'd even reached adulthood.

Now aged 3 years old, he has found his place and purpose in life and with his owner, he is working with Hartpury University’s Lucy Bearman-Brown to help save the lives of hedgehogs, a species in decline.

A dog’s sense of smell is much more sensitive than a human’s, so if a dog, like Henry, can detect a hedgehog in undergrowth or long grass, it’s hoped nesting hedgehogs can be moved to safety before their habitat is encroached upon. 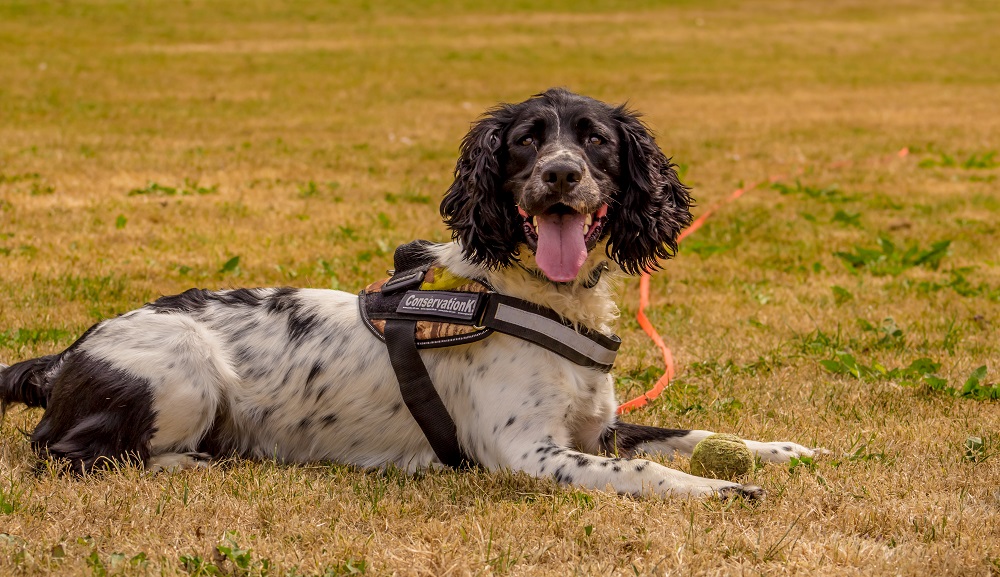 Louise adopted Henry as a young, enthusiastic and motivated puppy with a lot of energy.

With experience in training detection dogs for over 15 years, Louise knew what potential he had but first and foremost, she wanted him to feel bonded and settled after a disrupted puppyhood, moving from home to home.

She says, “When I first got him I needed him to first feel at home, and relaxed. I needed to let him be a dog, form a bond and relationship with me and my other dogs before I started any training."

He has now been working to help conservationists for two years. As well as being trained to detect hedgehogs, Henry is also is trained in bat carcass detection and Pine marten scat. He is now in training for dormouse nests as well as some other target odours for pilot studies.

Louise explains how he came to detect hedgehogs.

"When asked by Lucy (Bearman-Brown from Hartpury University) "is it possible to train hedgehog detection dogs?" I was delighted to say yes and prove this.

“It’s important to realise not just any dog can do this type of work. Many people say "my dog can smell a hedgehog and find them" but what people don't realise is that we have to be specially assessed and trained to have an effective and efficient search technique.

“I trained Henry to have a non-invasive and calm indication to the individual to avoid causing harm or stress to the hedgehogs. We have had to ensure he is correctly motivated and to reward him appropriately, ensuring we have longevity of his search and training and ensuring his wellbeing is taken into account. There is a science to it... and over 15 years’ experience handling and training hundreds of detection dogs to ensure we get it right.

“With any detection training, sourcing the target odour is the most important thing, but for wildlife detection, this can be harder, especially when it is living animals. It has been hard to gain access to live hedgehogs. We assessed Henry to start with to ensure he had the right attributes for the role. We even had three dogs in training for this to see which dog "chose" to do it and one dog really didn't like to get close to the hedgehog and showed a fear response to the hog when indicating so we didn't continue the work with that dog. The welfare of the dog and hedgehog has to remain a top priority throughout.

“Henry excelled in the assessment and training and was so very eager to find hedgehogs, but is a little unsure of them. He doesn't want to get too close to them which is perfect as we only want him to alert to me where the individual is, which can then be investigated by Lucy.”

Hedgehogs spend 85% of their life in their nest in dense undergrowth and long grass so they are in danger whenever land is cleared or long grass is mown.

Working alongside Louise and Henry for this trial project, Lucy started by finding hedgehogs herself the traditional way with spotlights and marking them with a small radio-tracking device.

Henry then searched the area, allowing Lucy can see how effective he is at finding the hedgehogs in a range of different habitats, during the day and night.

Afterwards, Lucy searched the area again herself, this time using thermal cameras, to see if modern technology can help with detection rates.

She says, “He is particularly good at finding hedgehogs hiding in thick undergrowth, much to the bemusement of Louise as she follows behind on the end of Henry’s lead.

“Henry is trained to locate hedgehogs without stressing or hurting them. When he finds one he lets Louise know by quietly sitting nearby and looking at her. He then gets his reward, a game of fetch with his ball, away from the hedgehog.

“The welfare of both the dog and the hedgehog has to be a top priority in this work. Louise and I work closely together to ensure this. We make sure the hedgehogs are not pursued by Henry, and their natural response when smelling the dog nearby is typically to curl into a ball.

“As soon as we have sight of the hog we move Henry away from the area so he can get his reward helping to reinforce his training and I can take care of the hedgehog. Henry is particularly successful at finding hogs that are tucked away out of sight, so this will be of benefit when looking at how we can protect nesting hedgehogs in areas of undergrowth. This does present some challenges as Henry works on the lead, but fortunately, Louise’s energy and enthusiasm for working with Henry equals that of Henry.” 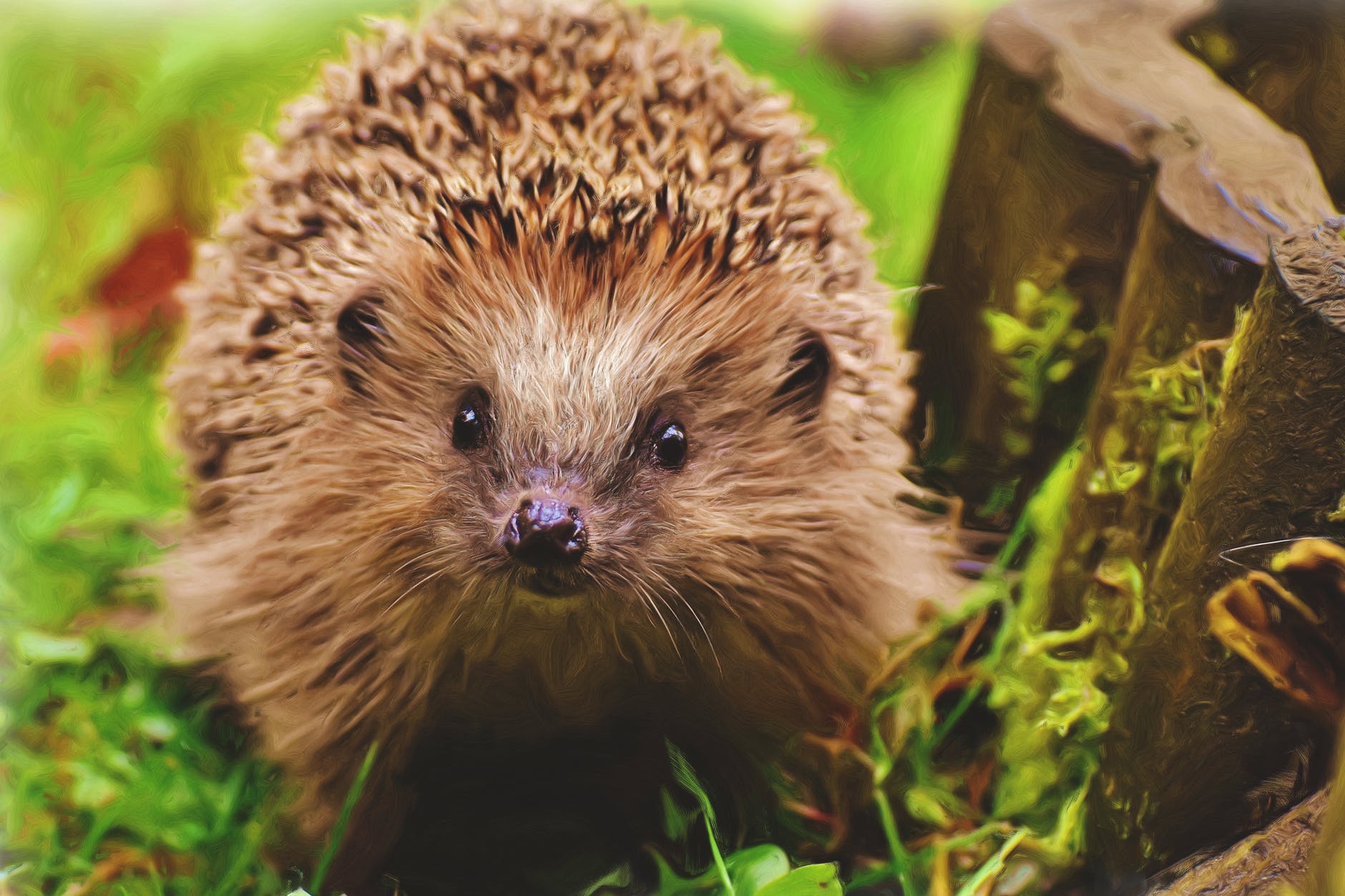 So far, studies for the project have been carried out during summer months, when hedgehogs are active and will continue during the winter, during their hibernation, to test the methods to the extreme but Lucy believes the early results are very encouraging.

“As we suspected, Henry’s already been finding hedgehogs that I couldn’t locate using traditional methods – he is incredible!

“These early findings suggest we may soon have a new method that is more effective for finding hedgehogs at risk from land development, so we can move them out of harm’s way.”

Why is hedgehog detection necessary?

Since 1995 it is estimated that the hedgehog population has declined by around 30%.

The reasons for the decline vary from housing developments taking over their natural habitat to slug or rat poisons being put down in gardens, even agricultural pesticides make it harder for hedgehogs to survive and thrive.

Lucy explains, “As hedgehogs naturally eat a wide range of insects anything that reduces the presence or abundance of insects in the environment could affect hedgehogs, so agricultural pesticides, for example, can make it harder for hedgehogs to thrive in farmland. With increasing pressure to meet targets for housing developments, open countryside is being encroached upon, reducing the amount of suitable habitat available.

“Hedgehogs can thrive in our towns and cities, but they are particularly vulnerable when housing estates are built as large swathes of land are cleared. This may include hedgehogs which are nesting in areas of long grass and scrub."

Lucy tells us that once the concept is proven, more dogs can be trained to help find hidden hedgehogs.

“Through this work we really hope we can provide the building industry with a method to protect hedgehogs. Whilst this isn’t a requirement of legislation per se as hedgehogs are not protected under schedule 5 of the Wildlife & Countryside Act [they are under schedule 6, so it is illegal to trap and kill them with certain methods].

“There is currently no requirement for them to be protected during land development, but some building companies have shown increasing interest in protecting hedgehogs during development and making new housing developments more hedgehog friendly. The People’s Trust for Endangered Species and the British Hedgehog Preservation Society, who are kindly funding this research, are working with a number of industry partners to further this work.”