Fleas, worms, mites and ticks are all words that as dog owners we know and we strive to make sure our pets, or homes, don't suffer from. The perception that canine parasites are only a threat at certain times of the year in warmer climates is something that over the years has stopped dog owners treating their pets in the colder months, but are parasites less likely to strike during the colder months?

The answer is no. Parasites can be a problem regardless of the temperature outside. Central heating allows fleas thrive in the home during the colder months.

As with most canine health issues, education and understanding is key to making sure parasites don’t get the better of your dog.

Fleas. At any time only five percent of the flea population have found a host, the rest are still looking.

Life Cycle: Anything from two weeks to eight months, depending on conditions.
Symptoms: Scratching, biting, bleeding and fur loss.
Cause: Lack of prevention.
Treatment: Flea repellent, spot on veterinary treatments or a flea collar.

Fleas are possibly the most common canine hosted parasite, and are also relatively easy to spot. They pass through a life cycle that has four stages. They are egg, larva, pupa and adult. The length of the life cycle depends on the conditions it encounters as a guest on your pet. Traditionally, the flea season was limited to the peak of summer and early autumn, however, with centrally heated homes now the norm, fleas can be a year round problem. 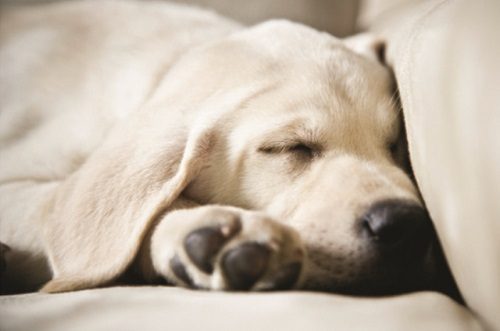 Temperature, food source and intervention are all factors in determining whether your dog will have a couple of days worth of scratching or months worth of intense, localised pain, infections and the risk of further infestations.

The female flea will feed on your dog’s blood. Once she has done this, her next priority is to lay her eggs, about fifteen or twenty at a time and usually up to six hundred in total. She will lay them loosely on your dog, and they tend to drop out anywhere. So you may see fleas emerging from your carpet, upholstery, clothes and even on your person. Then the life cycle continues.

The larvae are blind. They feed on bits of skin that fall from our bodies on to the ground, as well as waste matter from adult fleas, hair and other organic matter. They mature when it is safe for them to do so. In the meantime they will remain inside their cocoon until they can detect either heat, which indicates the presence of blood, or vibrations which indicate that they have found a living host from which they can feed.

It is best to try and break the flea lifecycle in more than one place to ensure effective treatment or control of fleas.  Use a product that will kill adult fleas as soon as possible and a product that kills either the eggs or larvae in the environment in which your dog lives.

Unfortunately for us dog owners, fleas have the capability to make our lives unpleasant too. They can and will switch host many times during their life cycle, and that itching you feel when you have a flea, is the parasite taking a blood meal.

Although flea infestations are not considered life threatening, they can cause dogs and their owners distinct distress if left untreated.

Nematode (Whip worm, round worm and hook worm). There are over fifteen thousand species of parasitic nematodes. They can be found in deserts, in the arctic, in oceanic trenches and in your dog.

Luckily in the UK we are not likely to come into contact with some of the more worrying species of parasitic worm and their primary carriers - the mosquito.

Parasitic organisms in general have quite complex life cycles, migrating between several different hosts or locations in the host's body, including the intestine, the bowel and the heart. Infection usually occurs orally, but parasites can enter a host via an open cut in unfortunate circumstances.

One of the main problems associated with a nematode infestation is the dramatic weight loss. Read more about this particular type of parasite on www.dogworms.co.uk

The symptoms and treatment of this type of parasite are very similar to that of the nematode, although the Cestoda have a different adult morphology which is more often segmented, meaning that they can break up without dying. They also posses male and female reproductive equipment, meaning that they can breed independently and do not rely on cross infestations to reproduce.

Johnson’s One Dose Easy Wormer are available in 4 sizes - from puppies and small dogs, to medium large and very large dogs (or homes with more than 1 dog).

Acarina (mites, ticks) The tick is a blood sucking relative of the scorpion.

Life Cycle: A tick usually lives for a year. It has a complex life cycle which involves switching host.
Symptoms: Grey or brown nodules attached to the dogs’ skin.
Cause: Lack of prevention.
Treatment: Repellent collars and spot on treatments, ancillary treatment applied by vets in severe cases.

Ticks are common in several areas across the UK, particularly in the Highlands of Scotland, the New Forest, the Lake District, and in East Anglia and the South East. They are a small, blood sucking parasite that live mainly in grass waiting to attach themselves to a warm blooded host. Once attached, they bury their head under the skin and begin to feed on the blood. They do not tend to move when attached, and will usually locate themselves at the level where grasses touch the animal.

The tick begins its life as an egg and then hatches into a larvae. It then develops into the six legged  nymph stage where it begins to seek its first host. After a week of feeding on its primary host, it will fall off and grow into an eight legged nymph and seeks another host. It can remain at this stage for any length of time from one week to eight months depending on conditions.

It will then molt and drop off, once this happens it is an adult. It then dedicates the rest of its life to feeding and breeding.

Ticks carry a bacterium in their gut called borrelia burgdorferi. This can often be passed on to its host causing diseases such as Lyme disease which can be fatal to the sufferer.

There are many types of tick and lots of different complications that can arise from tick bites, such as anaemia or infection.

Mange is one problem that is directly associated with hosting a tick or other type of mite. There are essentially two types of mange, namely Demodectic Mange and Sarcoptic Mange. The first one is caused by an over population of microscopic demodex mites that are usually harmless to dogs. These mites are usually present on dogs in small numbers, but if the host is run down, under nourished or genetically predisposed to the condition, the mites begin to breed more. If the dog is already ill or has an impaired immune system, these mites are able to infest themselves to an intolerable level for the host, who will then present the symptoms of mange.

The second type of mange is caused by a burrowing mite. These mites are unable to reproduce whilst burrowed under, but can cause intense itching, infection and distress to their host, it normally starts around the ears, muzzle or hock. In extreme cases it is necessary to shave the dog and apply treatment to the skin.