In a remote and relatively unpopulated region of North-Eastern North Carolina, approximately 100 red wolves make their home. They are all that’s left of a species that exists nowhere else in the world.

The red wolf (Canis rufus), a smaller and more slender cousin of the better known and more widely distributed grey wolf (Canis lupus), holds the dubious distinction of being the first large carnivore to become extinct in the wild in North America. Thanks to U.S. Government restoration efforts, a small, reintroduced population of red wolves currently seeks out a fragile existence in
the marshy lowlands called Pocosin.

Red wolves once roamed throughout the South-Eastern United States as far north as Pennsylvania and as far west as central Texas. Because of its wide distribution, the red wolf played a vital role in a variety of ecosystems, from swampy lowlands to forested mountains. 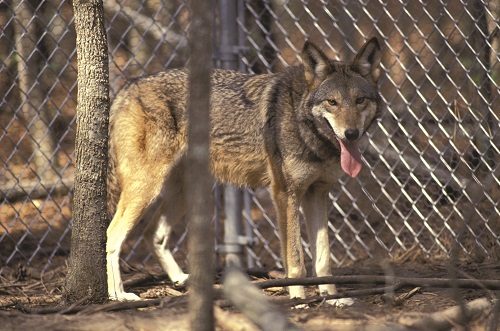 Shy and reclusive like its grey wolf cousin, the red wolf was nonetheless hunted, trapped and poisoned until few remained. By the 1970s, only a remnant population of red wolves existed in marginal habitat along the Gulf Coast of South-Eastern Texas and South-Western Louisiana. In a recovery program triggered by mandates of the Endangered Species Act, America’s strongest wildlife conservation law, the last 14 pure red wolves were captured by United States Fish and Wildlife Service biologists and placed in a captive-breeding program in a last-ditch effort to save the species.

The red wolf’s road from near extinction to recovery has been steady. However, the recovery effort has been plagued by biological and political hurdles including scientific disputes, cross-breeding with coyotes, political and legal opposition, and several on-going threats to the remaining habitat.

History of The Red Wolf

The origin of the red wolf is a subject of great debate among researchers. One theory suggests that red wolves originated from a cross between the larger grey wolf and the diminutive coyote. Other more recent studies indicate that red wolves split from grey wolves millennia ago, and that coyotes are a more recent off-shoot of the red wolf branch. There is also scientific disagreement about the original range of the red wolf, particularly in regards to how far north red wolves roamed prior to their disappearance.  These arguments are not merely academic.

The debate moved beyond the scientific in the mid-1990s, when wolf reintroduction opponents used the uncertain origins of the red wolf as fodder for a lawsuit attempting to block wolf restoration. The lawsuit was unsuccessful and the species, itself oblivious to the controversy, continued to do what nature intended: reproduce and survive.

Reintroduction to the wild began in the late 1980s with a successful but limited release of captive-born wolves on Bulls Island off South Carolina’s Atlantic coast. This experiment was followed by reintroduction of captive-born red wolves in Alligator River National Wildlife Refuge in 1987, and later into Pocosin Lakes National Wildlife Refuge, both in North-Eastern North Carolina. Notably, this was the first reintroduction of a species that was officially extinct in the wild. Red wolves were also released into Great Smoky Mountains National Park, but sadly these animals could not find sufficient food or raise young successfully, and the restoration program there was ended. 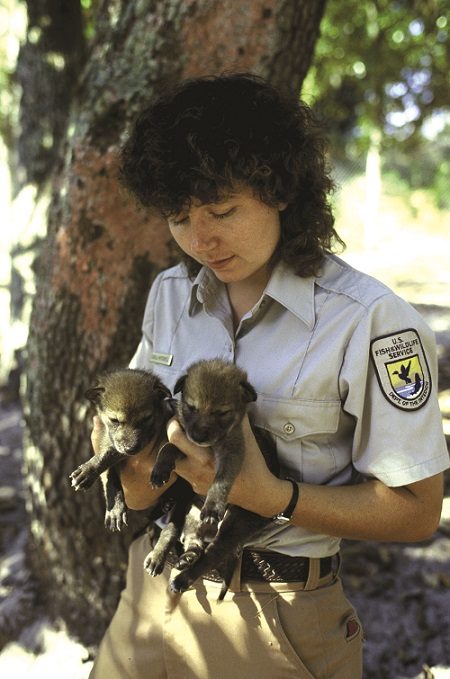 In the areas where red wolves are surviving, the ecosystem has benefited. By necessity, wolves tend to cull the weak, elderly and inferior animals from deer herds, thus leaving the remaining prey population larger and more robust. This is what nature intended: predators and prey to co-evolve and co-exist so that each keeps the other strong. Area farmers have also found that red wolves help control nutria, an invasive, non-native rodent species that damages crops and wetlands.

Thanks to the reintroduction program, today there are at least 100 red wolves residing in a five-county area of North-Eastern North Carolina. Population growth has been particularly strong in the past few years since officials began an intensive and successful, management program to prevent cross-breeding between red wolves and coyotes. The U.S. Fish and Wildlife Service recovery plan for the species calls for releasing red wolves at three separate sites to create a total wild population of 220 animals. Since the Great Smoky Mountains release did not succeed, officials will have to identify at least two additional sites for reintroducing red wolves in the Southeast.

As successful as the reintroduction has been, the existing red wolf population is not immune to threats. Despite strong local opposition, the U.S. Navy recently proposed building a fighter-jet landing field right in the heart of red wolf country. On top of this, the Navy has proposed designating special-use airspace over Pocosin Lakes and other areas where wolves reside. This action would lead to low-level, high-speed flights by military jets. Combined, these two proposals would result in more than 30,000 flights a year in Eastern North Carolina, bringing noise and air pollution and hindering essential access to the red wolves by government biologists. A coalition of conservation groups recently won a temporary court injunction against the construction of the landing field, but the Navy is appealing.

At the same time, Indiana-based Rose Acre Farms is proposing to build an egg factory in North Carolina red wolf territory. The four-million chicken factory would be one of the largest egg-production operations ever built in the United States, and would have grave impacts on the air and water quality and the environmental integrity of the area. Increased road construction for the facility would fragment red wolf habitat, and the facility itself may attract wolves where interactions with humans could prove detrimental to wolves.

Hope for the Species

Despite the challenges, there is hope for red wolves. A 2004 study by Defenders of Wildlife demonstrated that red wolves can be a huge economic boom to the rural areas they inhabit. The study surveyed visitors to North Carolina’s popular Outer Banks beach resorts, less than an hour’s drive from red wolf territory. Tourists overwhelmingly said that they would spend time and money to visit the natural areas that red wolves, black bears, alligators, river otters and other wildlife call home, thus generating thousands of dollars in the region’s rural communities. Conservationists are working to make these ecotourism programs a reality.

The Red Wolf Coalition is moving forward with acquiring land and building a Red Wolf Centre that would provide a home for a small pack of red wolves unable to live in the wild, educate visitors about this unique natural resource, and draw tourism dollars to the region.  In addition, conservationists are beginning to demand that the U.S. government investigate other potential red wolf recovery sites from Pennsylvania to Florida. Because more reintroduction areas are essential for the long-term recovery of the red wolf, feasibility studies are warranted.

The red wolf is slowly regaining its rightful place in Eastern North America’s web of life. Strong public support for restoring wolves to the landscape has resulted in significant gains. But obstacles to the continued recovery of red wolves remain. Conservation groups are working to overcome these challenges through ambitious outreach and education programs, innovative solutions to on-the-ground conflicts, and partnerships with other stakeholder groups. Healthy, sustainable wolf populations bring not only ecological benefits, but economic rewards as well.

To many people, restoring the wolf is not only a biological necessity, but a moral imperative. Because the species was decimated through human actions, many feel a sense of obligation to future generations to restore what we destroyed and to preserve the wild lands on which great predators and wildlife depend. As we now know, the South-Eastern United States is not complete without its native canine inhabitants.

For more information on the Red Wolf and for details of how you can assist red wolf recovery, please visit www.defenders.org and www.redwolves.org

Nina Fascione has been Vice President of Field Conservation Programs for Defenders of Wildlife, headquartered in Washington, D.C., and a Board member of the Red Wolf Coalition, headquartered in Columbia, North Carolina. She has been working on wolf issues for more than 20 years and has written numerous publications on the species.  She recently edited a book titled People and Predators: From Conflict to Co-existence.