How Eileen Radcliffe smirked at those words. She thought “as if I could ever become addicted to anything other than shopping, chocolate and dogs, obviously!”. However she admits a random phone call to a club called Agility Nuts (yes, that really was their name) four and a half years ago has resulted in having some of the best fun as well as the best exercise, the greatest frustrations and the closest bond she has ever experienced with her dogs.

Here's Eileen's story about her adventure into the world of canine agility, but before you read on, here's a little video to whet your appetite as to the possibilities you can achieve by taking that first baby step in to the world of training your dog for agility. Eileen's experience can inspire you toward a hobby that is not only great fun for you but one that your dog will truly love for the rest of their life.

I was looking for an activity which would combine exercise for me (not too extreme) and exercise and socialisation for my Goldendoodle boy, Ludo.

I had thought about showing but I was limited with a cross-breed not recognised by the Kennel Club, and I also felt it was a bit too long-winded and slow for me. I then mulled over Obedience but came to the conclusion it was too stilted and laboured for me. I then thought about Flyball but oh dear me, no, much too noisy and chaotic for me personally. Plus, I didn't feel it would address Ludo's socialisation needs.

So what did that leave. Agility. Something that might tax both our brains and fitness (or lack of) levels.

Ludo and I started when he was three months old. A common misunderstanding is that dogs need to be much older, all to with bone development and so on - wrong! At a young age there's plenty of opportunity to learn a few basics called 'foundation work' which includes focussing on the owner, recall, circle work but obviously all carried out on the flat, for example without jumps. I found agility has been brilliant for learning general obedience, heel work and especially for Ludo's socialisation. 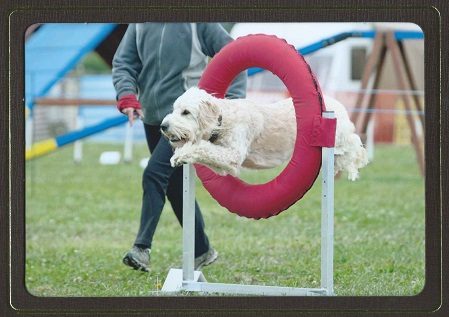 As with so many other dogs Ludo had issues with on lead aggression and this has led to many embarrassing situations – I'm sure you can imagine.

I think probably the most embarrassing experience was when Ludo pursued a rather pretty little Collie who finally capitulated and rolled over with Ludo standing over barking like a lunatic only to be closely followed by Bert the Rottie (some of the names have been changed to protect the innocent) . Bert then decided it was a golden opportunity to shower Lucy (but not with kindness you understand).

Meanwhile I was attempting to grab Ludo totally unsuccessfully needless to say whilst screaming “he only wants to play!” How many times have we heard that?

My trainer appealed to Lucy's owner with “he's being castrated tomorrow”. Lucy's owner replied “if I'd got two bricks I'd do it now”. In complete shame Ludo and I slunk back to the car covered in embarrassment, and horse poo.

After that ignominious incident we moved to work outside in the paddock on the premise that more space would result in more distance between the dogs and therefore less problems - if only!

On the first visit buoyed up by my brilliant trainer, I really think it's a must to find a good agility trainer to work with, Ludo was behaving quite well off lead when a late arrival emerged with two Shelties. Ludo took one look and chased one under the gate and towards the road, closely followed by his near hysterical owner as I stood by sheepishly! Before we go any further I hasten to add Freddie the Sheltie was fine, if not a little shaken up. To say Freddie's owner was cool, to say the least, towards Ludo and I for several weeks is something of an understatement. Hey ho!

So after a somewhat inauspicious start and Ludo's shames laid out for you to read I bet you're wondering if he and I continued with our agility? You bet!

After the vital foundation work the jumps are very gradually raised as the dogs mature. Tunnels, A frames, dog walks and most people 's bête noire - the weaves - are introduced. A patient, understanding and forward thinking trainer is crucial.

A key part of agility is the Reward Structure. The dogs are motivated initially by a combination of high rewards, such as treats and tuggy toys which encourages the bond between dog and owner and helps with focus. However I use the term 'initially' advisedly as both my dogs are now principally motivated by the sheer enjoyment of agility. Those alert readers will have noticed I mentioned both my dogs, and yes I succumbed to another Doodle this time a Labradoodle named Rufus. He too began agility at three months, but minus Ludo's issues.

I now train four times a week and when Ludo was eighteen months old my trainer, Pen Sensky, suggested competing. I now compete with both boys about twice a month and love every minute. Even though we'll never reach Crufts standard, not with all the Border Collies in the world, being competitive is part of my DNA. Many people simply love the training and the closeness it brings between dog and handler.

Competition day involves setting the alarm for some ludicrously early hour and then travelling an equally ludicrous distance to a remote incredibly muddy, unheated equestrian centre before walking and memorising courses. At a show run by The Kennel Club there several hundred dogs in your class alone which shows the popularity of the sport nowadays.

Why the growth in the world of canine agility? Well the challenge of going clear over a jump is incredible as there are so many unknowns and so many unpredictable outcomes and the partnership with your dog is incredible.

I have made some brilliant new friends and it's great to have such a great common interest as well as a joint love of dogs.

I have never been fitter and I have a huge wardrobe full of agility clothes. Another perfect shopping opportunity and I get to eat a lot of chocolate without having to worry too much!

As for Ludo and all of his issues, well if you'd told me at the beginning of our agility career that we would be queueing with tens of other dogs and cavorting round rings off lead with not so much as a growl I would never have believed you.

So if you fancy a new activity (I'm no spring chicken by the way) that keeps you fit, tests your brain and most importantly helps to develop the most amazing bond with your dogs give agility a go but " beware it's addictive ".

Have you taken up an activity with your dog and had similar experiences? We'd love to hear from you!