India is a country of extremes. Extreme wealth, extreme poverty. Beautiful untouched landscapes, big, noisy polluted cities. Pampered pooches in 5 star “Dog Hotels” with individual rooms and air conditioning, stray dogs living off what they can scavenge and suffering unaided with a variety of ailments and illnesses.

After being deeply moved by the plight of the street dogs in Rajasthan, India, Rachel Wright a British Veterinary Nurse, was spurred into action and in 2005 opened the gates of Tree of Life for Animals (TOLFA), a charity hospital specifically set up to relieve the suffering and bring compassion to street animals.

Here is Rachel’s View from India...

I had always known that I would set up a rescue hospital somewhere in the world, but when I visited Rajasthan in 2004 and personally witnessed dogs that had been taken in to the desert, tied up and left for dead in a misguided effort to reduce the stray dog population, I knew this was the place.

In a country that has over 1.27 billion people and an estimated 317 million dogs it would be wrong to make sweeping statements about either of these populations but after 8 years running TOLFA and seeing over 30,000 animals come and go through our gates I hope I can talk with some confidence about our specific area and the animals here.

We cover a 35 kilometre radius from our hospital which includes a big city called Ajmer, a smaller town called Pushkar and rural areas in between the two. All of these areas come with pros and cons for their dog populations. 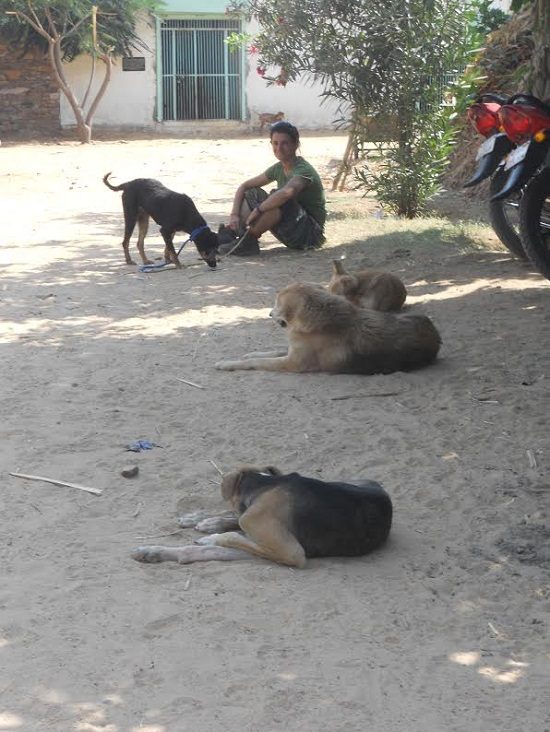 In the city there are more food sources to be scavenged due to an increased amount of rubbish but there is also increased competition for food, many motorised vehicles and because of the high human population, more conflict and so it is not such a friendly environment for the dogs. In a smaller town there are less food sources, but also less traffic and people tend to take a greater interest in the dogs welfare. Attitudes in villages and rural area can vary. Many people have dogs that they have ‘adopted’ from the street and they are used to help guard packs of goats, cattle and homes but if a dog poses a threat to their livelihood such as attacking their livestock animals, then action such as poisoning can be taken.

A misconception of India and its street dogs is that “no one cares.” This is most definitely not true. There are many people who care about the dogs and their welfare. Our rescue vehicle receives up to 20 calls a day from local people who are worried about sick or injured animals in their area. Although the dogs who come to our hospital through our rescue project do not have owners, they often have people we term as “care givers.” These people will feed, care for the dogs and take a whole hearted interest in the lives and welfare of certain dogs that live on the streets in their areas and they will often come and visit the dog whilst it’s undergoing treatment with us.

We all understand the deep bond that occurs between human and dogs and this is evidenced once again by the joy on the face of the care giver and the excitement of the dog when visits take place.

Without doubt one of the biggest problems that dogs face in India is the ignorance of humans and fear about Rabies. India has the highest human death rate in the world from Rabies. It’s estimated that one person dies every hour from this horrific disease and that 95% of cases of Rabies in humans are caused by bites from an infected dog. Once these facts are understood it’s easy to see why some people are scared of street dogs.

As in any country if a parent is scared of dogs, the child will be too and this generational fear cycle is very hard to break. We see children throwing stones at dogs who have no concept of why they throw the stone, only that they don’t want the dog near them because they are scared. Since TOLFA has been here we are slowly seeing an improvement in these types of ‘in built’ reactions due in part to our Education Project in schools and our vaccination program which has seen us vaccinate over 20,000 dogs against rabies therefore making it safer for humans and dogs to interact.

Owned pedigree dogs are increasing rapidly but unfortunately many of these dogs are just not suited to the harsh weather conditions or have immunity to the many tropical diseases found. To see a St Bernard or Husky trying to survive the 40C + desert heat is heart rending. Often the breeding of pedigree dogs is in the hands of amateurs trying to make some fast cash out of the sale of puppies but this often means that puppies are rehomed far too early and many have genetic anomalies. The genetic breeding pool for many breeds is still very small, increasing the likelihood of a problem. Adequate vaccination and correct feeding are also still in the early stages of being educated to the general public and so diseases such as distemper and hepatitis are common, as are nutritional deficiencies such as rickets.

We work hard at our hospital to reach every dog in need whether they be suffering from a parasitic problem such as mange, have been involved in a road traffic accident and are injured, have a wound that is infested with the all too common maggots or are simply malnourished and anaemic. Our reward is seeing these resilient, brave, trusting, strong dogs leave our hospital not only healed, sterilised and vaccinated, but fitter, healthier and for some having had their first taste of human kindness.

TOLFA is a registered charitable trust both in the UK & India. They rescue over 3,000 sick and injured animals a year, have sterilised over 17,000 dogs and vaccinated more than 20,000 dogs against Rabies. Their tag line is “Helping Animals, Helping People” and their work does indeed extend beyond the animals alone and includes literacy programs, free clinics for the animals of poor villagers, education within schools and providing Animal Therapy for children with special needs.

TOLFA rely solely upon donations and grants to run their hospital and in 2013 a change in local government legislation saw them lose a main stream of their funding amounting to £50,000 a year which means the future is now uncertain for their hospital. If you would like to help them by making a donation you can do so via their website www.tolfa.org.uk or contact them at enquiries@tolfa.org.uk