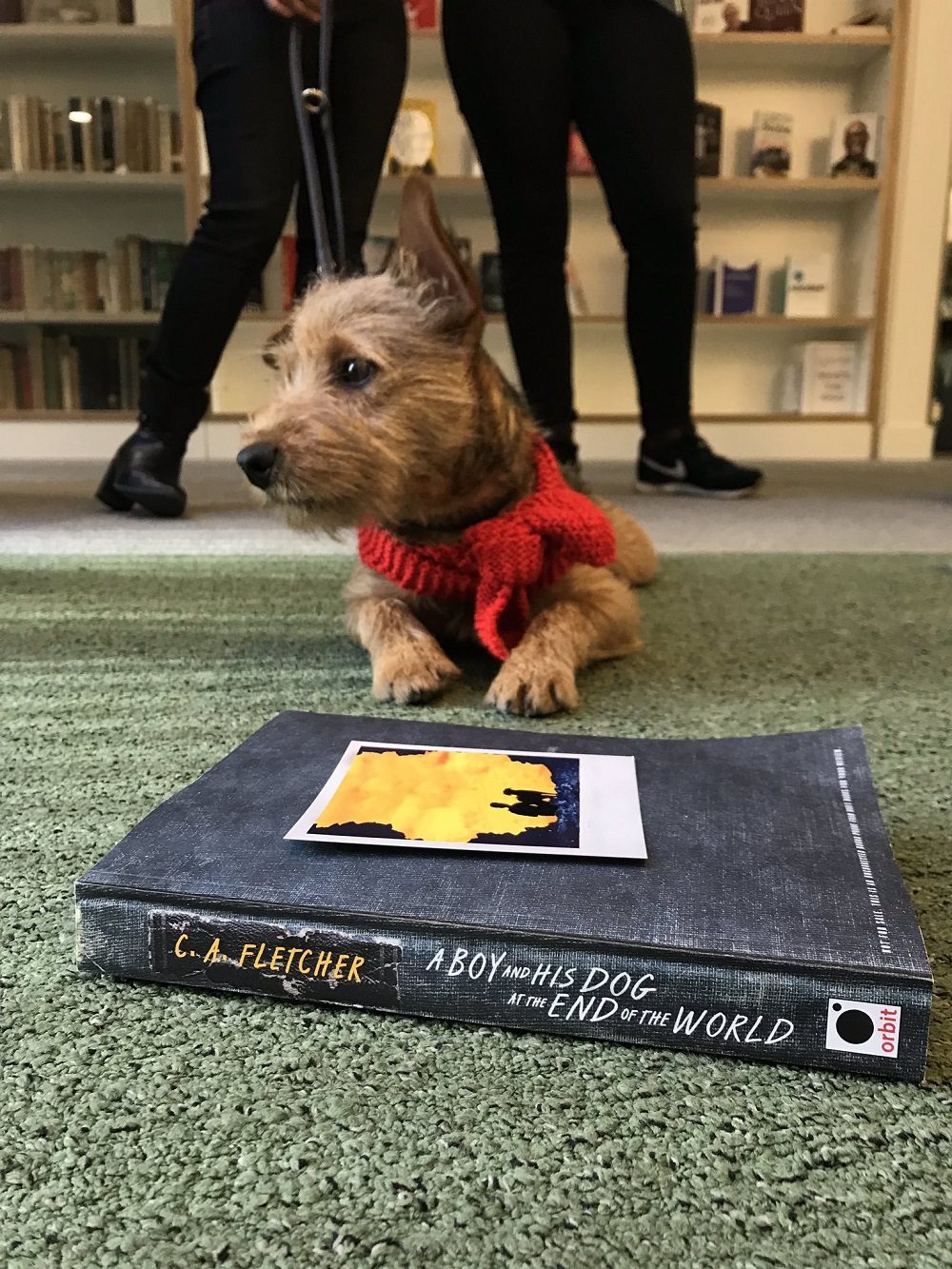 Dogs and stories are wound tightly through my life. And though they did not exactly save it they have made it infinitely richer, and – I think – made me a better person than I would have been without them, writes C.A. Fletcher, author of 'A Boy and His Dog at the End of the World'.

The dog who was the model for the fictional Jip in this book was called Archie. And much like Jip, he wove himself through the childhood of our son and our daughter like a golden thread – through their childhood, from one end of their adolescence to the other, and on into their young adulthood. And perhaps more of a gold and black thread, since like Griz’s Jip in 'A Boy and His Dog', Archie was, Archie was a rough-coated black-and-tan terrier, long-legged and fearless. He was somewhere between an Airedale and a Patterdale, a 'Fell Terrier' if anyone asked, which they often did. He was an eye-catcher.

My wife – who is an artist and dog-maker of some repute – has a pile of books about dogs that she often uses for reference and inspiration, and browsing through an antiquated encyclopaedia of dogs published in the early part of the last century I found a reference to an extinct breed called the Old English Terrier.

The description fit Archie perfectly, so – since make-believe is after all my stock-in-trade – I used to imagine that this was what he was – a noble remnant, the canine equivalent of 'The Last of the Mohicans'. He was really a scrappy mongrel and all the better for his mixed blood. And then, as I was finishing the last chapters of this book, he died. It made me think about the dog that ran through my own childhood, and remember a letter my father wrote to me.

As an only child I grew up without siblings, but I never felt lonely. Partly this is because neighbouring families had boys of my age so I was part of a ready-made gang of five, partly it’s because I began to read early and always had a story to lose myself in when alone (I would climb a tree and wedge myself in a fork in the trunk and read hidden in amongst what felt – in a light breeze – like a slowly moving sea of leaves. But that’s a whole other story....). The main reason I never felt alone was because of a dog. And that dog was the best present an only child was ever given. On the morning of my fifth birthday, I walked into the kitchen and was pointed to a cardboard box in the corner. I can still feel the lurch of pure joy in my heart as I realised it was a puppy, a Golden Retriever, and he was for me.

The first thing he did was run into the larder and steal an onion. So I called him Robber, and the name stuck. And he wasn’t a pet or a possession, because that’s not really how kids and dogs work: he was just family, and he ran alongside me through my childhood as playmate and companion and was a touchstone of security and loyalty.

When I was small he lay beside by my bed, his fur under my hand as my parents read me stories at night, and though he was expressly forbidden to ever get on the bed, the moment they left I would pat the mattress and he would wake from feigned sleep and jump up. My parents were very good at turning a blind eye. Maybe they knew I really thought of him as a brother.

He lasted until I was away at University, and died when I was twenty-two. When my parents called to tell me, I walked to the end of a lonely pier jutting into the eye of a narratively convenient storm coming in off the North Sea and hid my tears in the wind and the rain.

My dad was not of a generation of men who spoke easily about emotions, but I still have the letter he wrote to me at the time. In unexpectedly moving language he said that if you were lucky you got several great dogs in a lifetime, but you were guaranteed at least two great ones: the one you grew up with, and the one you watch your child grow up with. Because of Archie, I now know that to be true. I also know he was trying to tell me that the end of something wasn’t always a permanent end, but could eventually be the start of something new and different.

The real point of the letter was not the truth of what my father was saying, but the fact he was saying it at all: it was the first time I looked up and realised that there was a whole unexpected emotional story going on beneath my father’s habitually gruff and somewhat stormy exterior that I had, until then, been blind to.

And maybe because I was studying literature and was for the first time acknowledging to myself that I wanted to be a writer, and so was thinking about stories as something I wanted to make, rather than just consume, I now think that letter made me realise two important things.

Firstly that character reveals itself as much by what is not said as it does by what is and secondly that it reveals a lot about itself by the timing of that moment when what has not been said is finally voiced. That unexpectedness, those contradictions between light and shade, all the inner conflicts at odds with the outer appearance are what make characters really sing and stick in our minds. That’s why I’ve always loved Robert Louis Stevenson’s Long John Silver and Alan Breck Stewart, one an unrepentant, silver-tongued pirate but an honest one in his way, and the other a gallant hero, but also – possibly – a murderer.

Charlie and his real-life Jip

Maybe the real work of stories is actually done in the bits between the words, where there is space for the reader to get in and come to their own conclusions about the truth.

P.S. Turns out my dad was right about something else. I’m lucky. I got more than just the two guaranteed great dogs.

So far the count is four: not only do we have Bobby – Archie’s 'wife', who my wife rescued off the streets, but the week I sent the manuscript of this book to my editor, we got a new dog. He’s a terrier too, shorter legs but so far, all the indications are that he has just as fearless a heart.

And, because of course, we had to, we call him Jip. And so the story continues...

Charlie Fletcher is a screenwriter and children’s author living in Edinburgh. His latest novel, ‘A Boy and his Dog at the End of the World’ was written under the pseudonym C.A. Fletcher.

Charlie’s Stoneheart trilogy has been translated into a dozen languages and the film rights have been sold to Paramount. The first volume, Stoneheart, was shortlisted for the Branford Boase award and longlisted for the Guardian Children’s Fiction Prize.

His standalone novel for children, Far Rockaway, was published last year to great critical acclaim and has been longlisted for the Carnegie prize. He can be found on Twitter at @CharlieFletch_r.