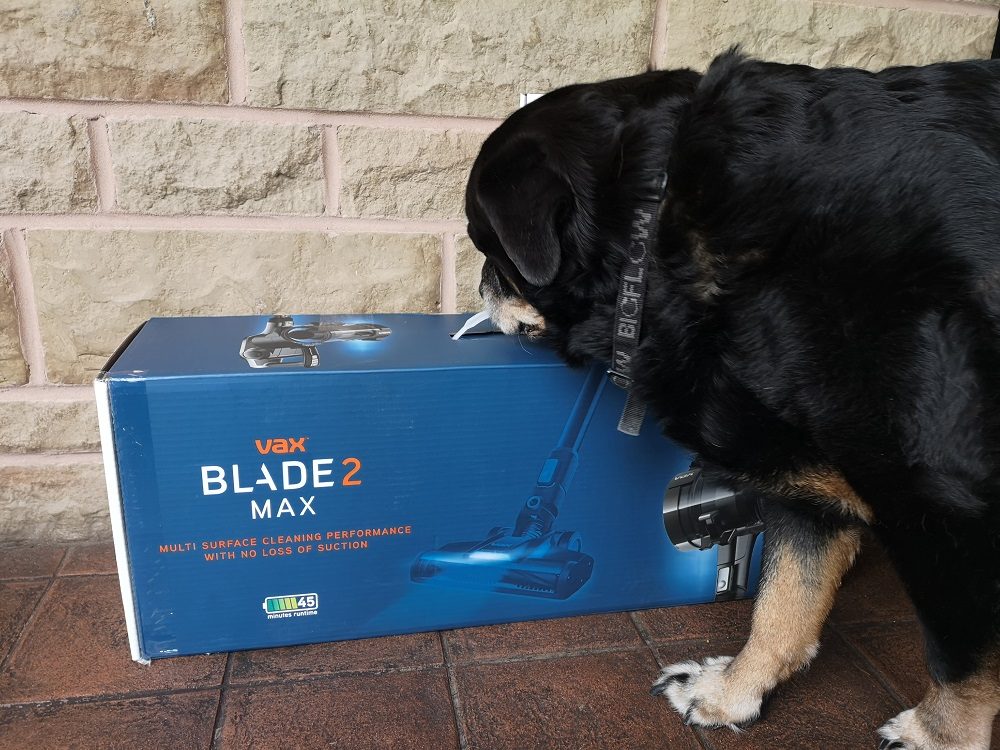 I've been lucky enough to review a lot of vacuum cleaners over the years to see which, if any, are best suited to tackling pet hairs. I've found a couple that I really liked but always try to find a balance between what I think based on my rather extreme needs (a cat and three dogs with near constant shedding and a penchant for mud) with others who maybe have fewer pet hairs (and muddy paw prints) to tackle.

One thing I've learnt is that I tend to prefer cordless cleaners to corded ones. Once you have a bit of freedom from the cord, it's difficult to go back. And I tend to like sturdier upright cordless cleaners (such as Gtechs) and haven't really found a whole lot that Iike about stick design cordless vacuum cleaners.

I've just never found that they have the same oomph, so this month when I was invited to review the Vax Blade 2 Max 40V (£249.99 RRP, with a three year warranty and free tool kit worth over £50) I wasn't sure what to expect, but I have to be honest, it surprised me.

There's very little fuss when you open the box, which I like, so it doesn't take a lot to put it all together. It's all fairly intuitive, and the same can be said for using it whether as an upright stick vacuum or handheld.

The on/off button is in a line with all other symbols and unlike some other cleaners I've tested, I didn't accidentally hit them while I was cleaning. That might sound like something you should expect as standard, and I think you should, but it isn't always the case. I've tested a few cleaners where it's happened and it's just awkward to use. One even had a design feature (I say flaw) where you had to keep the 'on' button pressed down while using and it was incredibly frustrating. This one doesn't have those issues, thankfully.

To set the cleaner to work is simple. When on, the symbols all light up and they make it clear what controls what function. So you can switch the brush on/off using the rotating symbol depending on the floor surface you're vacuuming and you can make it work harder by increasing the power using the plus symbol. It's all pretty straightforward.

Alongside the vacuum inside the box was a charger, tool caddy and wall mount plus a couple of key tools as standard, a duster brush and a crevice nozzle to use the Vax as a handheld vacuum cleaner.

The nozzle is a fairly standard tool but I've never seen a curved nozzle design like it - it's flat and curved - and I loved how it tackled stubborn pet hairs and dust built up stuck in corners that others couldn't fully get rid of, but more on that later.

Of those extra tools, the flexible crevice tool was handy because it expands to about double the size, making it useful for tackling cobwebs (or as Mia thought, a fairly handy chew toy at one stage) and the tough dirt tool and textile tool were pretty useful too.

I'm not a fan of stretch hoses, I've never got along with them so I'm afraid I don't give them a chance. It might just be me, but I need my second hand free to throw dog toys out of the way or to balance against a wall to avoid my dogs running past me and taking me down the stairs with them while I'm concentrating (think tidal wave of two rambunctious middle-aged boys), rather than operate a tool to make sure it goes where needed.

The vacuum comes with one battery so you may need to charge up for an hour or so before you get started. There were around 10 minutes of charge on mine I discovered (yes, I am the kind of person who has to play with their toys straight away).

When the battery is fully charged, all four bars light up and the bars reduce as the battery power decreases.

When using in standard mode you get around 45 minutes of vacuuming time. When you press the plus sign to use greater power, you get far less battery time. It is possible to use it wisely though and I found the standard power pretty good most of the time, which is unusual for this type of model I have to say. I think that's down to the 40V battery power versus a usual 24V for Vax or similar for other upright vacuums.

When you get to the last bar, it flashes red and using the standard power function, I find you get about 5-10 minutes cleaning time before the battery dies.

I hate it when I've got a small area left to do and the battery signals it's about to die and then it just cuts out. I rush to finish like I'm on a gold medal challenge to get the last bit of surface area covered, just so I can finish without having to go back to the job. There's nothing worse (#firstworldproblems etc) than having to stop what you're doing to charge the battery for 20 minutes or more to get enough charge in it to finish one small area off, is there?

So knowing you have about 5-10 minutes left is handy. I also found that the quality of the vacuum's performance didn't dip the lower the battery charge got either, which is equally unusual. Usually, as the battery power decreases so does the performance of the cleaner. So where does it fall short?

Well, the dust bin size. It might be an optical illusion but it seems a bit smaller than what I've come to expect as standard (I use Gtechs usually) so on a full house clean, I expect to stop, empty and carry on at least once.

With the Vax, I factor in at least two bin-pit stops.

This puts my husband off using it, but I'm less bothered by it at the moment, it could grate on me at some point but for now, I'm trading the power and performance over inconvenience.

I really like it, I have to be honest.

The battery performance was fine and it did everything I needed. I like the fact there's no drop off in suction power as the battery decreases.

My home is an old cottage so in the oldest part of the house, the radiators are closer to the floor and the space beneath is much narrower for vacuums to get into (if only pet hairs had the same problem!) and some vacuums struggle to get underneath and I end up bashing around trying to make something fit when it simply can't.

This vacuum, however, managed the space fine. The brush head is nice and narrow without compromising on performance so it got into those hard to reach areas, like underneath radiators, very well.

I also really liked the standard crevice tool because when using in handheld mode with it attached, it picked up hair and dust far easier from corners. I can't say for sure why, but it does. It's a really brilliant little tool.

How It Compares to Other Vacuum Cleaners

When I think about it overall and the job it does, I find myself comparing it to others of a similar design and you might too, so on that note, there are a few things that stand out in my mind to say:

It's nice and lightweight. Unlike some others, it doesn't feel top heavy when you use it. Some really do have an imbalanced feel to them, which is to be expected because the battery etc is all in one area, but still, it can feel a little awkward to use at least in the beginning until you get used to the feel of it.

And for this kind of stick design cordless cleaner, which I'm not a massive fan of, I usually find I need to use the maximum power setting constantly, so it says a lot about its standard power and the quality of suction in the battle against pet hairs, dust and dirt.

Overall it performs very well. As I mentioned above, the size of the bin is probably it's the main downside. It does feel smaller than others.

Price wise, at £249.99 roughly, it's also pretty good too compared to its main competition if you consider it converts from an upright stick model into a handheld vacuum.

For example, the Shark Duo Clean starts at around the same price point increasing to £379.99 with various add-ons, such as two batteries, and Gtech comes in at between £199-249 for their similar stick design (with a bag) or their upright vacuum cleaner (my favourite of the two). Dyson varies depending on the design's age but you see models on the market from £249-599.

If you're in the market for a new vacuum cleaner and looking for one that offers value for money and can do a good job with pet hairs, I'd definitely suggest reading more reviews and investigating the Vax Blade 2 Max. Although my husband still prefers our older vacuum, I've found myself reaching for it first.

I will update in a few months to share how it continues to perform.

Vax Blade 2 Max Review: How Does It Handle Pet Hairs?

4.0
In this article:Issue 126, Vacuum Cleaners For Dog Owners

Over the years I have become somewhat of a vacuum connoisseur, forced mainly into this by my cat, dogs and cream carpets. In recent...

Every room in my home probably has some sign of a misdemeanour left behind by one of my four pets, and that's all fine....

In This Issue... Talking Point: 10 Times Dogs Proved We Don’t Deserve Them Real Life: ‘My Dog Was Stolen From My Garden’ Lifestyle: Zara...

Zara Holland is a model and fashion boutique owner who is probably best known for appearing on ITV’s reality show 'Love Island'. She has...