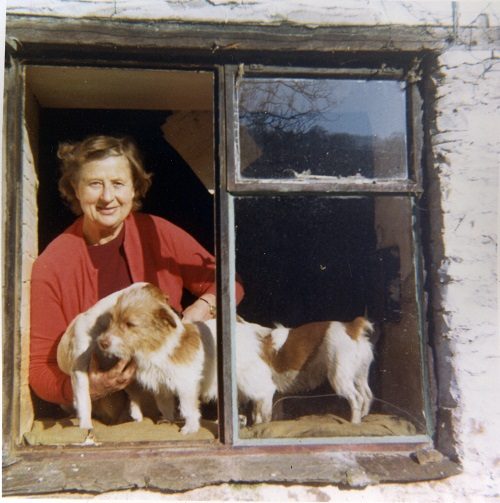 Irène Johnson (known as Buster) was born at Versailles in 1907, to a French mother and English father. She was 29 when she married Johnny, swapping her cultured upper middle class life for one of frequent chaos and uncertainty. In 1951 they moved with their young family to Nethercote, a remote and run down farm in the heart of Exmoor. She wrote Alas Poor Johnny, a vivid and fascinating account of their early farming days there, some ten years later but it has never – until now – been published. They were still living at Nethercote when they died; Buster in 1987, Johnny in 1992.

Here their daughter Birdie, who edited Alas Poor Johnny and herself spent many years at Nethercote, talks about her mother’s book, and her parents’ devotion to their dogs.

Buster, Janey, Tiddles & Shebie, pictured above, at their kitchen window circa 1963

My parents have always had dogs. I say ‘have’, though my parents are no longer alive, as it is hard to think of them in the past tense. They had the same problem with their dogs. I think my father remembered every one.

When I was very young (I am the youngest of their four children), they had Dalmatians, but I don’t remember them. They were followed by Leader and Minky, the Labradors my mother talks about so endearingly in Alas Poor Johnny. Leader and Minky came with us to Nethercote, the farm in the wilds of Exmoor to which we moved in 1951. I do remember them, and most of the dogs who followed. How is it that you remember the names of dogs you knew years ago, but not those of people? Even my nephew Boris, Buster’s eldest grandchild, whose foreword to her memoir is so heartfelt and engaging, remembers, and names, the dogs.

My father, Johnny, never knew his mother (she died shortly after he was born). He had been brought up by his grandmother and great aunt and was a generally undemonstrative man, unskilled in the art of showing affection. My mother, by contrast, was warm and outgoing, with an effervescent personality and a great sense of humour. While she mothered us, enfolding us to her bosom, he got on with the serious business of running the farm. It wasn’t that he didn’t love us; he just didn’t know how to show it. His idea of showing affection was to pat you, rather firmly, on the head. But with the dogs, and the other animals, he was gentle and loving and infinitely patient.

The Johnson family with Leader, visiting the boys at Sherborne in 1954

After Leader and Minky died we had terriers; a long line of Jack Russells descended from Crumpet, given to me for my tenth birthday. All these years later I still remember the cardboard box among the piles of presents on the long table in the middle kitchen (as our sitting room was known), with a little brown nose sticking out of the gap in the side. From Crumpy came Janey and Tiddles. Tiddles was the runt of the litter, kept by my father for that very reason, who became inseparable from him and infuriated the rest of the family – and anyone else – by growling ferociously if he was sitting with my father and we went too close. This hulking guy, who struggled to express himself, felt no embarrassment in calling Tiddles ‘Daddy’s little man’. Later, from another litter, we had Susie. ‘I do love you Susie,’ you would hear him say as she sat on his lap at the kitchen table, his hand gently stroking her head.

Janey, Tiddles and Crumpy, pictured above, in the kitchen window circa 1964

Then there was Shebie, whom he called Monkey Pup. He would take her to the pub and she would climb up and wrap herself round the back of his neck while he sat on the bar stool, in the corner by the fire (which over the years became his recognised place), talking farming and hospitably buying drinks for whoever came in. ‘What are you having old boy?’ he would ask, as Shebie snoozed quietly behind him.

When we moved from suburban Surrey to Nethercote my mother gave up her upper middle class lifestyle of bridge parties and visits to the theatre with her mother and threw herself into what was then – and in some ways still is – a tough and primitive way of life.

Her world shrank, the animals taking the place of absent friends in her affections. Alas Poor Johnny, in which she describes our early farming days at Nethercote, is peopled with stories about pigs, sheep and hens, all with names, and about the dogs. Whether she is lauding the intelligence of Forest, a sheepdog who could count up to five, describing the dog fight in which she got badly bitten, the anguish of dogs being poisoned, sheep worrying, or the role the terriers played in the rescue of her French aunt, lost on the moor, it is clear that the dogs were embedded in their lives. I remember, years after we had had to find a home for Dandy, a much loved terrier who had been chasing sheep, my father – again at the kitchen table – would sink his head into his hands and sigh with regret.

Kylie, pictured above, circa 1964, by Anny Amberg

My mother boiled up tripe and lights and mixed it with brown bread, bought from the baker exclusively for the dogs. Brown bread was a basic staple in those days, not the artisan product it has now become. The dogs ate brown; we ate white. She fed and mopped up after the endless litters of puppies, for it wasn’t just the terriers who had puppies, there was also Lassie and Kylie. They were handsome sheepdogs, with burnished russet coats, who populated half of Exmoor with their progeny. And however firm my parents tried to be in finding homes, they invariably weakened and kept a puppy, which my father would declare, with absolutely no justification, to be ‘the best of the litter’.

The dogs were my mother’s friends, and her companions. She was convinced that, if there was a heaven, they would be there too. Though I’m not sure how that would work, precisely, given that the dogs didn’t always get on (and there would have been so many of them). So if you’re up there Ma, and can hear me above all the barking, congratulations. I’m so proud of you, and your book. As Boris says, it is wonderful to hear your voice again.

Johnny and Gillian (Birdie), pictured above with two of Kylie & Lassie's puppies in the early 1960s

Here's one of our favourite extracts from Alas Poor Johnny, where we find out more about Buster and Johnny's much loved Labradors, Leader and Minky.

We have had many wonderful dogs. The best of them all were Leader and Minky, who came with us from Surrey. We have sheepdogs now, and terriers, and we love them too, but no dog can ever take the place of those two Labradors. Leader was yellow and Minky black. Both were gentle and neither of them had an ounce of vice although, as happens even in the best families, each disgraced us from time to time.

Minky couldn’t resist the temptation to chase people on bicycles and bark at them until they lost their nerve, wobbled and fell off; then she retired satisfied. Leader left Romeo in the shade and would make his way to the village, where he would sit all night outside someone’s house waiting for the appearance of his Juliet. If his patient vigil went unrewarded he didn’t depart empty-jawed but removed a love token from the unconquered citadel in the form of any shoe or boot which he found in the porch or by the back door.

Thus a missing wellington would be discovered on a neighbouring farmer’s dung heap and its brother in the girls’ cloakroom of the village school, and he concealed PC Short’s boots so successfully neither of them was ever found. This was an expensive amusement for us and one which didn’t exactly endear him to the people of Winsford, until they came to recognise his noble nature and forgave him his little eccentricities. […]

Leader and Minky were our beloved companions for many years. Leader would welcome the members of his family by taking their wrists between his teeth and pulling them gently along. Minky took between her teeth not people’s wrists but their hens or goslings and brought them to us as presents, depositing them at our feet unhurt and without a ruffled feather.

Leader was still playful and full of vitality when, at the age of 12, he died of phosphorous poisoning, contracted heaven knows how. Minky, his devoted comrade for so long, kept vigil by his body in the garden while Johnny dug his grave in the Splat, the meadow below the house. When he came back to fetch Leader he found his body half covered with loose soil from the flower bed. She had tried to bury him.

Minky died at 13 and is buried in the Splat beside Leader. Their paw marks were imprinted side by side in 1952 in the wet concrete of our doorstep.

We hope you enjoyed this month's Book Club feature, with a tear in our eye thinking of Minky and Leader, we're off to buy our copy of Alas Poor Johnny now!

For more information go to www.troubador.co.uk

Talking Point: These 5 Dogs Can't Get Enough of Their Favourite TV Shows Health: Lyme Disease & Dogs - What You Need To Know...

4 of The Best Ways to Keep Your Dog Healthy

This month K9 Magazine has been searching for the best dog products around to help keep your dog healthy on the inside and out....

Dog DNA Tests: How Accurate Are They?

At K9 Magazine we often like to play a little game. It's called, Guess The Crossbreed. It's simple enough. We take a picture of...

Finding Mitzi: The Rescue Dog Who Helped to Heal a Heart

Ask any dog owner and they'll no doubt tell you that when their dog came into their life, a gap was filled. It automatically...