Ask any dog owner and they'll no doubt tell you that when their dog came into their life, a gap was filled. It automatically feels like they've never not been there, and they bring something we needed, whether we knew it or not.

For Paula Stewart, finding Mitzi, a two year old Mastiff cross, meant healing a hole left in her heart after her dad died 18 months ago.

My dad was my best friend. When he died I really missed having that feeling of love around, as you can imagine.  Whilst I'm eternally grateful that my mum, sister and boyfriend, Mark, have been so supportive, I wanted something to love the way I could love my dad, and that search led me to find a new and unconditional love. The love of a dog.

So, the search began for a big dog with a load of character.  We wanted to rescue because I can't bare the profiteering from puppy farms and as there are so many dogs in need out there that it seemed like the right thing to do.  We looked all over and finally found Merseyside Dogs Home that at any one time has around 50 dogs searching for their forever homes.  After researching online we saw a Rottie, named Rott 'n' Roll, that needed help so we went to visit the home.  As we were waiting to meet her we had a look around the kennels.

I don't remember anything much before or after this big ginger girl came running up to me and held her paw out.  She let me stroke her and looked at me with big eyes.  The poor thing was so thin and you could just tell she needed some TLC.  We quickly asked the kennel staff if we could take her for a walk before we met Rott 'n' Roll, but I already felt that tug on my heart and knew I'd fallen in love. 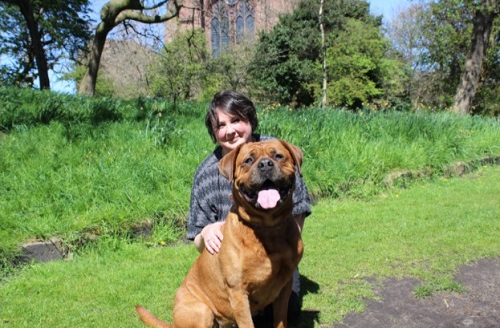 She was strong on the lead and nearly pulled me over, but she just wanted to play, even though you could tell she was nervous.  Mark and I looked at each other and said, 'she's the one!'

Unfortunately, it wasn't going to be Rott 'n' Roll's day, but it was going to be Mistlepaw's!

What we learned about Mistlepaw was that she had been a stray for several weeks until rescued.  After a Christmas spent in the kennels, a man took her, only to return her after five weeks.  She then spent a few more weeks in the kennels and was suffering with kennel stress.

Apparently large dogs are the hardest to re-home, and Mistlepaw was particularly difficult because she had stress-colitis.  This might put a lot of people off, but I have Crohn's Disease, and whilst Colitis and IBDs are different in humans, I felt a sort of affinity with her.  I just knew I had to help her.

Eventually, we took the handsome lady home, called her Mitzi for short, and nursed her through her stress-colitis.  She was a very fussy eater at first, but after a couple of vets visits and two weeks in a warm and cosy home, she soon relaxed and her stomach settled down.  Gradually, she also began to put on weight and her true character began to shine.

When we adopted her, she was 31kg and is now 37kg after being with us for 11 weeks. She is now just her ideal weight and the vet is happy to see her colitis is no longer a problem.

Her true character began to shine and she has become an absolute joy to be around.  She's been great at learning new tricks and she loves an audience to perform 'paw' and 'rollover' to.  She's fabulous with people and loves to run around in the park, entertaining everyone she walks by. In fact her talent to shine means she's even now signed up with a modelling agency, Urban Paws, so fame awaits!

In her eighth week with us, the little (big) lady went into season.  It was a good sign for us because it meant she was settled enough mentally and physically to go through this.  It's been a challenge because she's so pretty and all the boy doggies love her, but I wouldn't have it any other way. 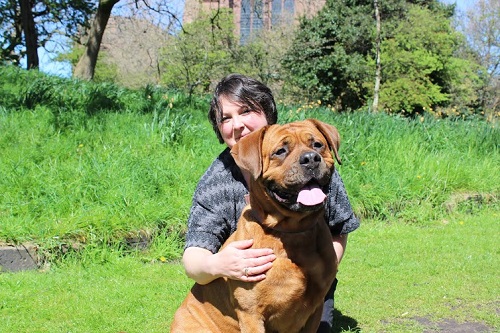 We still felt incredibly guilty about leaving Rott 'n' Roll but were pleased to see that within a week of us rescuing Mitzi, he'd found his forever home too with experienced Rottweiler owners.  It seemed that everything worked out perfectly in the end.

Our rescue experience has been so amazing.  Every day I think how much she's helped me after the loss of my dad and I know he would have adored her.  I feel like the cock of the North when I walk down the street with her because I'm so proud to be by her side.  She's a real stunner and she's my best friend.

Don't get me wrong, it hasn't been plain sailing and there have been things to overcome. From making sure she was settled enough that her symptoms of stress-colitis faded to her lead training, which hasn't been the easiest, but we're getting there and I respect that these things take time.

We know so little about Mitzi's background other than she was incredibly scared when we first saw her, so we know that we still have to take things one step at a time.

Mitzi is my little (big) hero and every day I hope to be her hero too.

Find the dog of your dreams at www.dogsblog.com

Have you adopted a dog who has changed your life? Let us know, we'd love to hear from you!