My name is Julie Tottman. I have been training animals for the movie industry for almost 30 years. I have worked on many productions a few to mention Harry Potter, Spectre, Mary Poppins, Paddington, Patrick, Chernobyl, Game of Thrones and What a girl wants.

It was when I was approached to do What a girl wants my journey with Pickles began. I had to find a Yorkshire Terrier to appear in the film. I had read an article about a puppy farm that was shut down and the dogs seized.

I approached them to see if they had a little dog that would be suitable for filming. They did happen to have a female so I rushed down to Wales to meet her. I instantly fell in love with her although thought she may never be a movie dog. 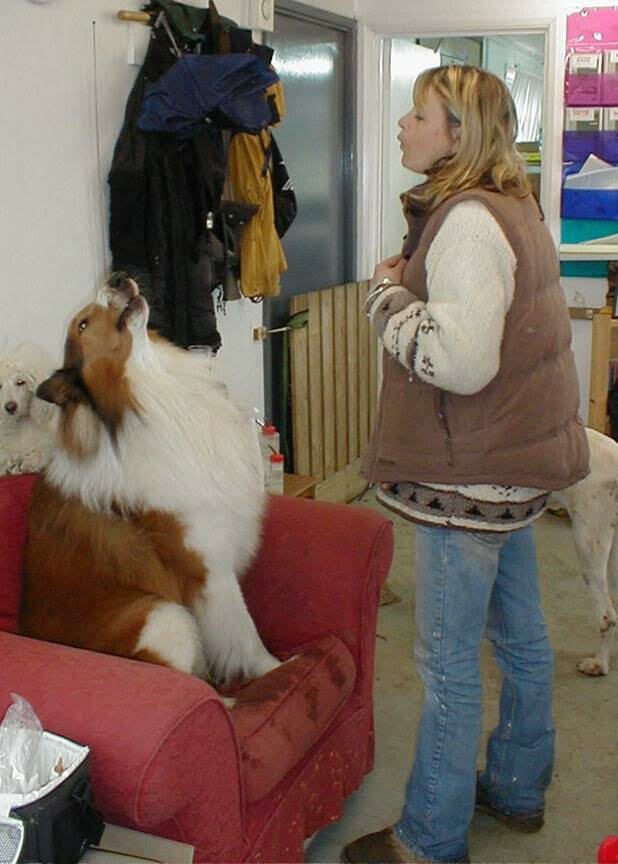 However, there was no way I was leaving without her as she needed love and nurturing. She went from a very sickly, scared dog to a superstar.

The story of Pickles is now a book Will You Take Me Home? Available to buy on the 3rd September.

To prepare the dogs for filming we start with basic obedience; good stays, bark on cue, hit a mark on the ground etc…. We then go onto prepare them for whatever is in the script.

This can be anything from playing dead, jumping through windows, retrieving articles or whatever trick the production wishes us to train.

All the training is reward based. Positive reinforcement is the only way to train. The animals love the training and of course the attention they get on set!!

All aspects of training are fun, but the unusual requests are the best! I am currently teaching dogs to scratch on cue and sneeze on cue for an allergy ad. I am never quite sure what I will be doing next.

My passion is rescuing animals that have had a hard time and showing them humans are nice and full of fun.

It is the most rewarding part of my job. Finding these sad souls and watching them blossom and love life. Some animals take longer than others to train depending on their past experiences.

It takes time and patience and a lot of understanding.

You cannot rush the training process if the animals are not ready.  The saying you can’t teach an old dog new tricks is certainly untrue.

I have trained many older dogs over the years.

My next book (publishing in February) is the story of a Mastiff I rescued who then appeared in Harry Potter. Another special dog that came to me from Neapolitan Rescue.

I have just finished work on the Disney film Cruella and my main star in that was a beautiful dog that came off the streets of Cyprus.

I feel truly blessed to have such a wonderful job that I am still excited about each and every day. I get to meet some incredible people and combine my love of animals with my job.

I urge anybody to give a rescue animal the second chance they deserve.

Will You Take Me Home the new book from animal trainer to the stars, Julie Tottman.

This beautiful and moving story is about Pickles, the brave rescue dog who was raised on a puppy farm before being adopted. Julie saw the potential in this strong little pup from the moment they met, and lovingly trained her to become a movie star – starring in What A Girl Wants alongside Collin Firth and Amanda Bynes.

Julie has worked on some of the biggest film and television projects including Harry Potter, Game of Thrones and 101 Dalmatians. She is available for interview, to give advice on how to train animals for new pet-owners, and original features. She would be happy to write a feature about her experiences, how she trains her dog, and provide tips on the best way to train rescue animals especially as so many people are getting lockdown dogs!