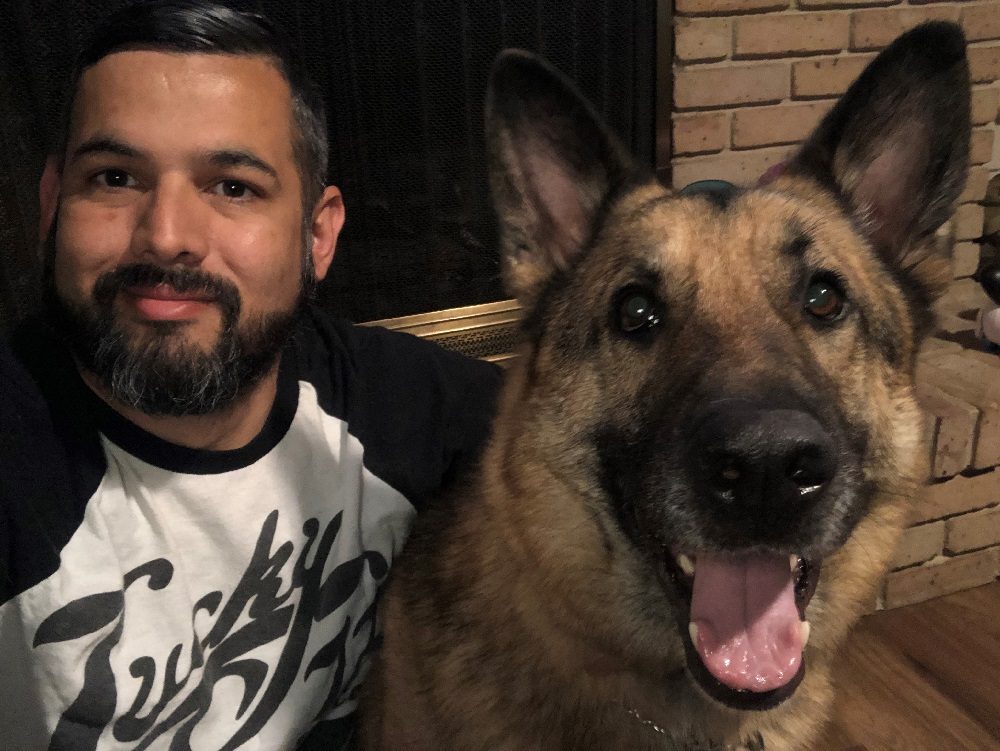 For years Hero, nicknamed ‘Lunchbox’ because of his love of food, spent his days detecting explosive devices in Iraq with his handler, Joaquin Mello.

The relationship between a dog and their handler is unique and when you consider what they go through together when deployed overseas, it’s not hard to see why.

But when it comes time for the working dog to retire, usually at around six or seven-years-old, the pair usually have to part ways because circumstances (deployment schedules and living in military barracks) usually prevent Army handlers from being able to adopt the dog.

As a SOC Canine Handler, Joaquin's circumstances are different to when he was in the Army and so when the organisation planned to retire Hero, they asked him if he and his family would like to adopt him.

The family were delighted and now Hero is getting to discover a whole load of new ‘firsts’ as a family pet with the Mello family and Joaquin is getting to see the dog he was inseparable with in Iraq developing new bonds with his family, his two-year-old daughter especially.

“We become one with our dogs and therefore want to stay together. In fact, I owe my life to my former Army dog Bodo. He saved me in Iraq in 2008, by pulling me back from shots being fired at me, before I was even aware. If I didn’t have him warning me, I might not be here today.”

We spoke with Joaquin to find out more about Hero’s life as an explosive detection canine and how he’s adapted to family life.

Hi Joaquin, thanks for your time. What made you want to become a canine handler?

“When I was in the Army, working as a Military Police (MP) officer, I saw the impact Military Working Dogs have on the mission and was amazed. I witnessed a suspect being identified and apprehended by a canine, using his scent and abilities that far surpass human capacity. I have always been a dog lover, so I knew that the K9 Handler life was for me.”

What made your working relationship with Hero so special?

“When I first joined SOC, the trainer asked about my handling skills, style and temperament. This was important to them in finding the right match for us both. In the beginning when pairing and understanding Hero, I needed to try to deeply connect to his behaviour and mannerisms to read him and begin working as a team.

“This didn’t take much, because our personalities just clicked. He got me and I got him. It is very hard to explain but it was just this instant connection for us. His personality and mine are one and the same. Very relaxed and fun loving dog, a big fluff ball. I am a very laid back person – a down to earth kind of guy.

“When we deployed to Iraq, he was with me at all times. He slept in the room with me, with the exception of going to get food and going to the gym, we were inseparable. I walked and played with him a lot. He loves to fetch and tug toys. He had a few pup pals over there, and I gave as much time to play and work as possible.”

Can you share some standout memories about being on tour with Hero?

“Some of the stand out moments are just the little things we shared every day. It might be me having a hard day and Hero would nudge my hand and would want me to pet him. I would look at him and the hard day would just seem like a distant past.

“The bond that a handler and a working dog share is very unique and special. It is a million little things a day that makes being a handler a great thing to do.”

How has Hero settled into normal life after being in Iraq, he must be experiencing a lot of 'firsts'?

“Hero has settled in perfectly with my family. When I brought him home I was a little worried how he would react to my kids but he took to them instantly. My youngest daughter who is two-years-old, Hero follows her around all the time and lays by her when she takes a nap or when she plays.

"One of his favourite things to do is to get on the trampoline with my kids and jump on it with them. Hero is a little defensive of the house but besides that, he is doing great. Maybe this is because he understands his duty as my other half, protecting while I am away. He goes everywhere with my wife outside of the home and is very connected to her as a guardian.

“We are so overjoyed to have him. He gets to be a house dog now. Hero had the nickname at SOC as ‘Lunchbox'  because he loves food. The kids call him ‘Hero Snackie-poo’ now. He is very spoiled and he gets lots of gourmet and organic dog treats. He is now a member of our family and we wouldn’t have it any other way.”

In This Issue... Talking Point: 10 Times Dogs Proved We Don’t Deserve Them Real Life: ‘My Dog Was Stolen From My Garden’ Lifestyle: Zara...

Zara Holland is a model and fashion boutique owner who is probably best known for appearing on ITV’s reality show 'Love Island'. She has...

If I could give a message to my 20-year-old self it would be this: 'Skincare matters. You don't have to go all guns blazing...

What Does a Medical Alert Dog Do?

Our dogs are our best friends. They listen to our problems and give us a shoulder to cry on without judgement. They make us...